A process for the elimination of the concerns of energy and the environment. 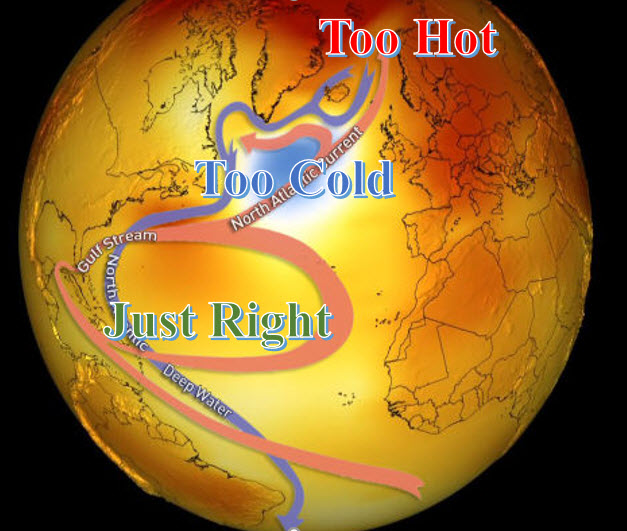 In accordance with Figure 1 and NASA, the Earth has warmed about .8oC during the last 40 years, but the poles are warming even faster; the Arctic has warmed by more than 1.9oC during the same time period.

The Nature Communications paper Possibility for strong northern hemisphere high-latitude cooling under negative emissions by a team of researchers from the NORCE Climate, Bjerknes Centre for Climate Research in Bergen, Norway, showed that the collapse or strong reduction of the Atlantic meridional overturning circulation (AMOC) would substantially cool the northern high latitudes and could be amplified by deliberate CO2 removal.

“The timing of negative emissions relative to AMOC decline and recovery is key in setting the strength of the temporary cooling,” they said. And showed that pronounced temperature-fluctuations at high northern latitudes would entail considerable consequences for sea-ice and permafrost extents as well as for high latitude ecosystems.

The North Atlantic warming hole, the blue blob in Figure 1, is a cold ocean surface temperature anomaly that is affecting the Atlantic Meridional Overturning Circulation (AMOC), part of the thermohaline circulation. It is believed to be caused by global warming-induced melting of the Greenland ice sheet that could affect Europe and North America and produce sea level rise for the U.S. East Coast 3–4 times greater than the global average, which in turn is impacted by the higher carbon emission rates in the region.

In 2005 researchers noticed that the net flow of the northern Gulf Stream had decreased by about 30% since 1957 which could, in theory, divert the Gulf Stream that usually flows northward, past the British Isles and Norway instead toward the equator.

Were this to happen, Europe's climate would be seriously impacted.

Michael Mann, one of the authors of a 2015 paper  Exceptional twentieth-century slowdown in Atlantic Ocean overturning circulation, noted “if the Atlantic Meridional Overturning Circulation were to totally collapse over the next few decades, it would change ocean circulation patterns, influence the food chain, and negatively impact fish populations. We would not return to very cold conditions, however, because the oceans have taken up so much heat.”

This cooling in the Northern Hemisphere would be partially offset by a warming in the Southern Hemisphere but can lead to a decrease in the global mean temperature, which presumably would be a net benefit for a warming world but for the fact it would produce winners and losers and increase the economic disparity between the north and south.

The 2019 paper, On the relationship between Atlantic meridional overturning circulation slowdown and global surface warming  points out “a strong AMOC warms the surface,” therefore its shutdown due to either CDR or otherwise, would bring extremely cold winters to Europe and parts of North America, a rise in sea levels along the U.S. East Coast and disrupt seasonal monsoons that provide water to much of the world. In other words, it leads to the opposite of a Goldilocks effect.

AMOC variability is not the dominant explanation for observed changes in ocean heat uptake. For example England et al in the 2014 paper Recent intensification of wind-driven circulation in the Pacific and the ongoing warming hiatus showed that a pronounced strengthening of the Pacific trade winds over the period 1998-2013 cooled the tropical Pacific by increasing ocean heat uptake leading to a decline in the observed surface warming, which is the model from which Thermodynamic Geoengineering (TG) was derived.

A temporary overshoot of the Paris Agreement temperature targets and subsequent carbon dioxide removal (CDR) from the atmosphere is increasingly being discussed as an option to delay the costly transition to a zero-carbon economy and society.

The goal of CDR is to lower global average surface air temperature (SAT)  but the Norwegian study shows the strength of the AMOC would ultimately decline by 3 to 5 Sverdrup (Sv), a unit of flow equal to 1 million cubic metres per second, as a consequence of large scale CDR efforts.

The contemporary AMOC strength is about 17.4 Sv but the AMOC decline between the periods 2000–2014 was about 1.5 Sv and is estimated to have caused a shift of about 9.5 ZJ of heat from the Atlantic Ocean to the Southern Ocean. Which is about 20 terawatts (TWs) a year, or about the total consumption of primary energy being transferred from the Atlantic to the Southern Ocean.

There are only three baseload renewable options for replacing fossil fuels. They are:

The heat to work conversion with TG is 7.6%, as calculated by the experimental physicist Melvin Prueitt of Los Alamos National Labs using a proprietary DOE program Otec.exe. So, as of 6 years ago the heat of warming could be used to produce 31 TWs of work.

As the Washington Post reported 9 months ago however, the amount of heat that is being trapped, mostly in the oceans, has doubled over the course of the past 16 years.

It must be noted that although direct air capture of carbon dioxide is often presented as a promising technology to help mitigate climate change, the paper Thermodynamic loss analysis of a liquid-sorbent direct air carbon capture plant showed these processes are highly energy intensive and in the case of Carbon Engineering’s 1 Mt-CO2/year natural-gas-powered direct air capture (DAC) process, the Carnot efficiency is only 7.8%. To sequester 1 megaton the plant consumed 273.2 megawatts (MW), 252 MW of which irreversibly lost as waste heat. All at cost   Carbon Engineering predicts will eventually be between $94 and $232 per ton.

For essentially the same efficiency as the Carbon Engineering plant, TG can convert the accumulating heat of the oceans to work and recycle the unconverted heat repeatedly, until all the heat of warming has been converted over the course of about 3,000 years. As opposed to the 252 MW of waste heat being used by Carbon Engineering to sequester 1 Mt, which increases the ever threatening viral heat load of the Earth system.

This would not lower global average SAT because, although the tropical waters would be cooled, the cooling would be compensated for by enhanced polar warming like that shown in Figure 1 that in turn melts polar ice that is causing the North Atlantic warming hole.

Fundamentally, the effect of conventional OTEC on the AMOC would be akin to CDR on steroids.

The leading edge of the 1 gigawatt TG hydrogen production plant shown in Figure 2 has a surface area of 72,800 square meters.

The thirty-one thousand plants shown in Figure 2 would shift 47 square kilometers of surface heat to a depth of 1000 meters where it would it diffuse back to the surface at rate of .000001 m/s (1 cm/day or 1/(60sec*60min*24hrs))  which amounts to only .02 Sv. Which is essentially zero disturbance of the thermohaline circulation, or the north/south distribution of heat but for the cooling of the north at the expense a minimal annual warming of the tropical water column between the surface and 1000 meters of about .000008oC (.008/1000).

The 1 gigawatt TG greenfield plant shown in Figure 5 eliminates the dual problems of energy storage and the grid because the hard to decarbonize industries like steel, cement and the like  can be powered  by energy derived directly from the ocean. 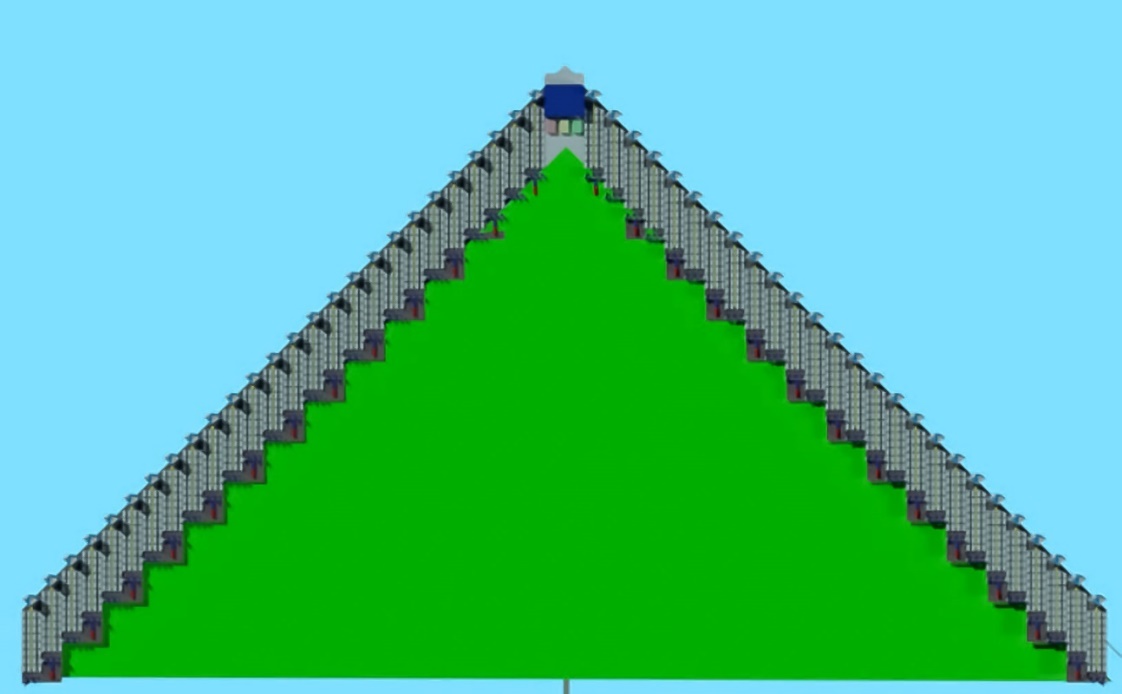 Raw material can be loaded on one side of an ocean basin and finished goods can be delivered on the other.

It is estimated we will have to remove 10 billion tons of CO2 from the atmosphere every year by 2050 and for this to be economically viable we will have to get the cost of CDR down to $100 per ton.

In other words, it is claimed we will have to shell out at least $1 trillion a year for CDR alone with the cost of energy yet to come. Whereas with TG we get twice the energy we are currently deriving from fossil fuels at half the cost with 4.4 billion tons of CO2 of CDR thrown in. Plus, surface cooling, ocean cooling, polar cooling, north/south heat homogeneity, 3,000 years of energy security and global warming respite, sea level and storm surge decline, a lack of need for energy storage or expensive grid refurbishment. All of which leaves greater economic room for addressing the other concerns of the planet and its citizens and makes Goldilocks happy.