Economically and environmentally things won’t look up until we start looking down!

The premise of the disaster satire Don’t Look Up is a planet-killing comet is hurtling toward Earth and the response of the public to the discovery is primarily that of indifference.

In the real world, as the Guardian recently has reported, extreme heat in the oceans ‘passed the point of no return’ in 2014 and that unfolding disaster too is also largely being met with indifference.

Fear is one motivator for the change that is needed, but it hasn’t worked.

It is time to give greed a try.

Ocean heat uptake is the essential measure of the Earth’s climate. Ninety three percent of the heat of global warming is going into the oceans which are thermally stratified with lighter waters near the surface and denser water at greater depth. Which is a configuration that acts as a barrier to the efficient mixing of heat, carbon, oxygen, and the nutrients vital to aquatic life. 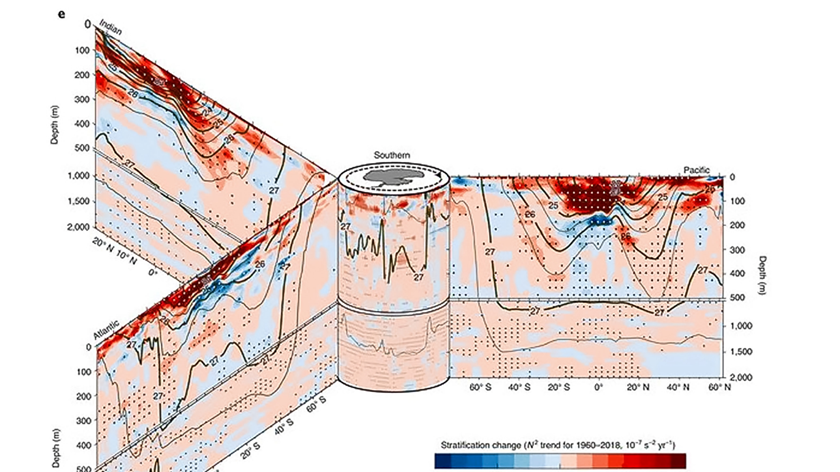 Efficient mixing of these ingredients, as Thermodynamic Geoengineering (TG) provides, eliminates all risks of climate change, and produces twice as much energy as is currently derived from fossil fuels.

The thermally stratified ocean lends itself to the conversion of a portion of the heat of global warming to work in accordance with the laws of thermodynamics and to the movement, through heat pipes, of surface heat to a depth of 1,000 meters where it is no longer any kind of environmental risk.

Heat moved to an average depth of 500 meters therefore produces a quarter of the sea level rise due to thermal expansion and heat moved to that depth is unavailable to melt the ice caps, which is producing about 20% of current sea level rise. 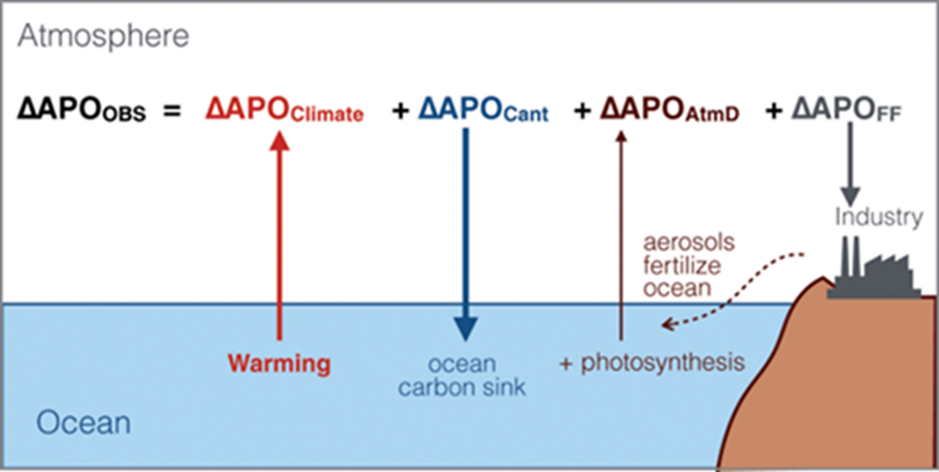 They were able to isolate the carbon dioxide off gassing, about half the total, from the direct effects of anthropogenic emissions and other carbon dioxide sinks.

At a 7.6% efficiency as determined by the experimental physicist Melvin Prueitt in a 2007 patent filing, this equates to 31 terawatts - 2.1 times the current output of fossil fuels.

Whereas Resplandy estimated the amount of heat going into the ocean on the basis of the increasing levels of atmospheric oxygen and carbon dioxide as the oceans warm and emit these gases, reversing this process, as Greg Rau and I explored in a paper, Negative-CO2-emissions ocean thermal energy conversion, cools the surface so atmospheric carbon dioxide moves back into the ocean in accordance with the Ideal gas laws as represented by the following graphic from the Engineering ToolBox. 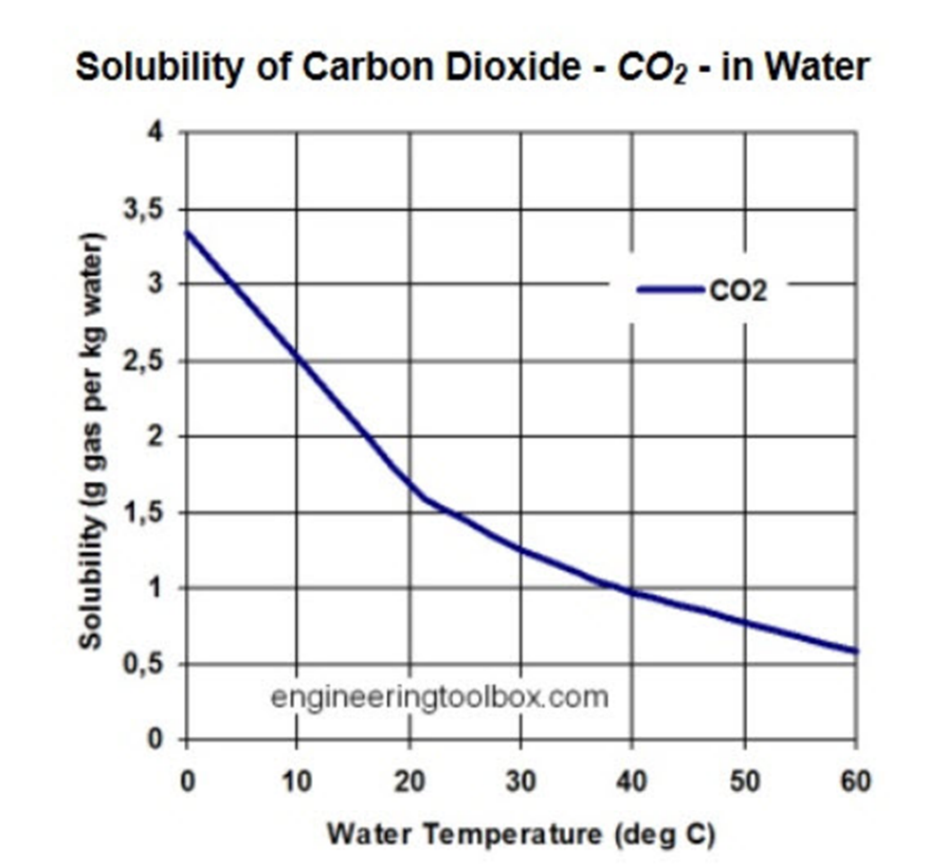 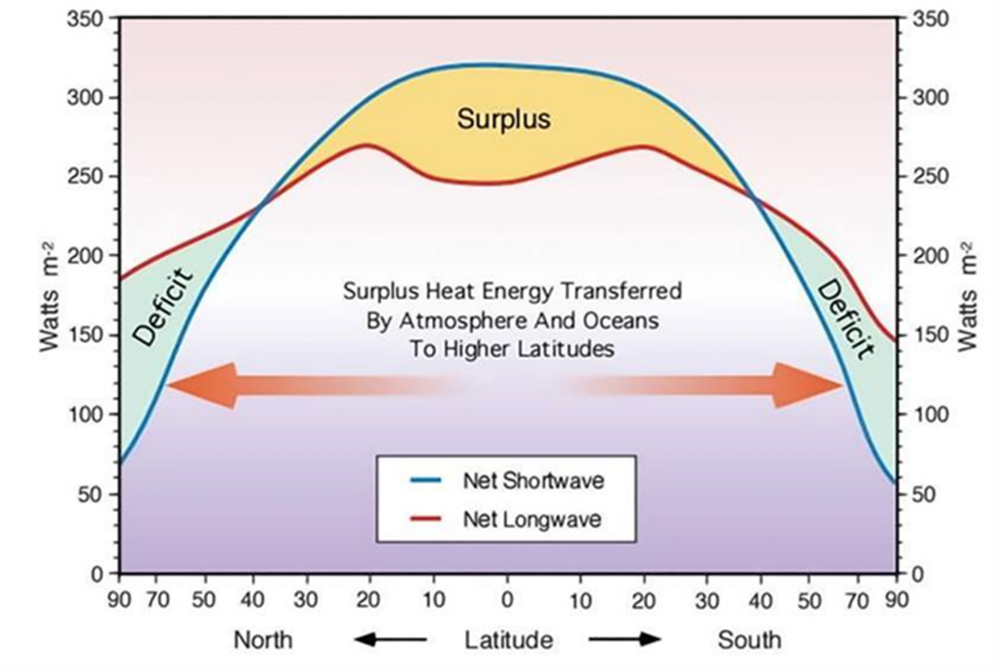 But ocean temperatures of at least 26.5 °C through a minimum depth of 50-meters is cyclone fuel so, a cubic meter of the tropical ocean surface contains at least 4900 watts of heat.

There are 7 seasonal, tropical cyclone basins that spawn about 96 cyclones a year and about 20 of these become intense tropical cyclones, super typhoons, or major hurricanes that release around 600 terawatts of power each compared to the 409 terawatts Resplandy estimated the oceans gained due to warming between 1991 and 2016.

Neil deGrasse Tyson: exerted scientists in a 2017 interview to figure out how to turn hurricane energy into electricity, which is what TG accomplishes.

Per the following graphic, between the equator and the North Pole about 15 times more heat transfers through the atmosphere and the ocean annually, mainly through the atmosphere, as is produced by global warming and this transfer is causing the Arctic to warm 3 times faster than the rest of the planet, which is only one of the problems solved by shifting surface heat into deep water. 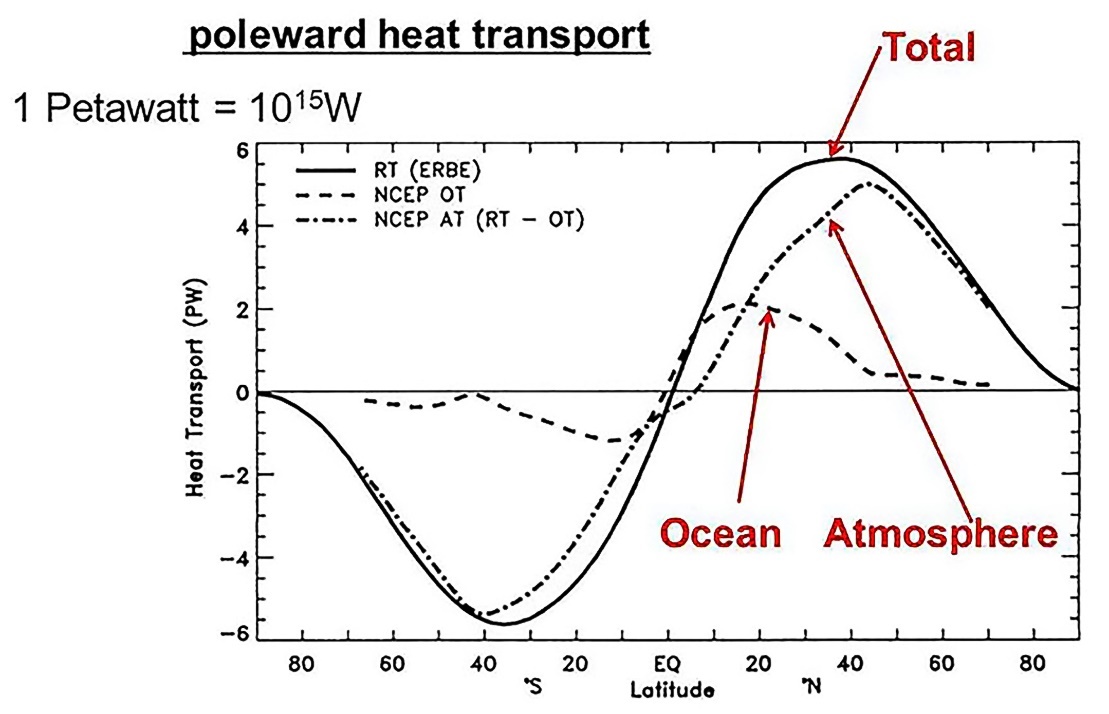 Carbon dioxide and oxygen degassing from the tropics is leading to a decrease in fish stocks and warming that induces more off gassing that produces more warming Ad infinitum.

At the higher latitudes the oceans are a sink for carbon dioxide, but this sink too is being impeded by a rapid warming of the poles.

The recently released National Academy of Sciences report on ocean-based carbon dioxide removal, claims fundamental knowledge around many ocean-based carbon dioxide removal mechanisms is lacking, and that there is not yet a clear path to verification of removed carbon — if it’s even possible. Additionally, because many of these approaches involve shifting chemical equilibria rather than removing and storing particular molecules of carbon, they also require a new way of thinking about volume and permanence. Substantially more research and pilot-scale deployments will be needed to validate these approaches, they assert.

TG, however, utilizes the fundamental science surrounding temperature and the solubility of carbon dioxide in a lab scale prototype that makes possible the verification of this relationship at minimal cost. It is a new way of thinking about the volume and permanence of carbon dioxide removal which validates an approach that is vital to the solution to climate change, and the thermodynamic implication of global warming in general. Once this relationship has been demonstrated by the prototype, it scales to the power ratings and carbon dioxide sequestration levels shown in the following graphic. 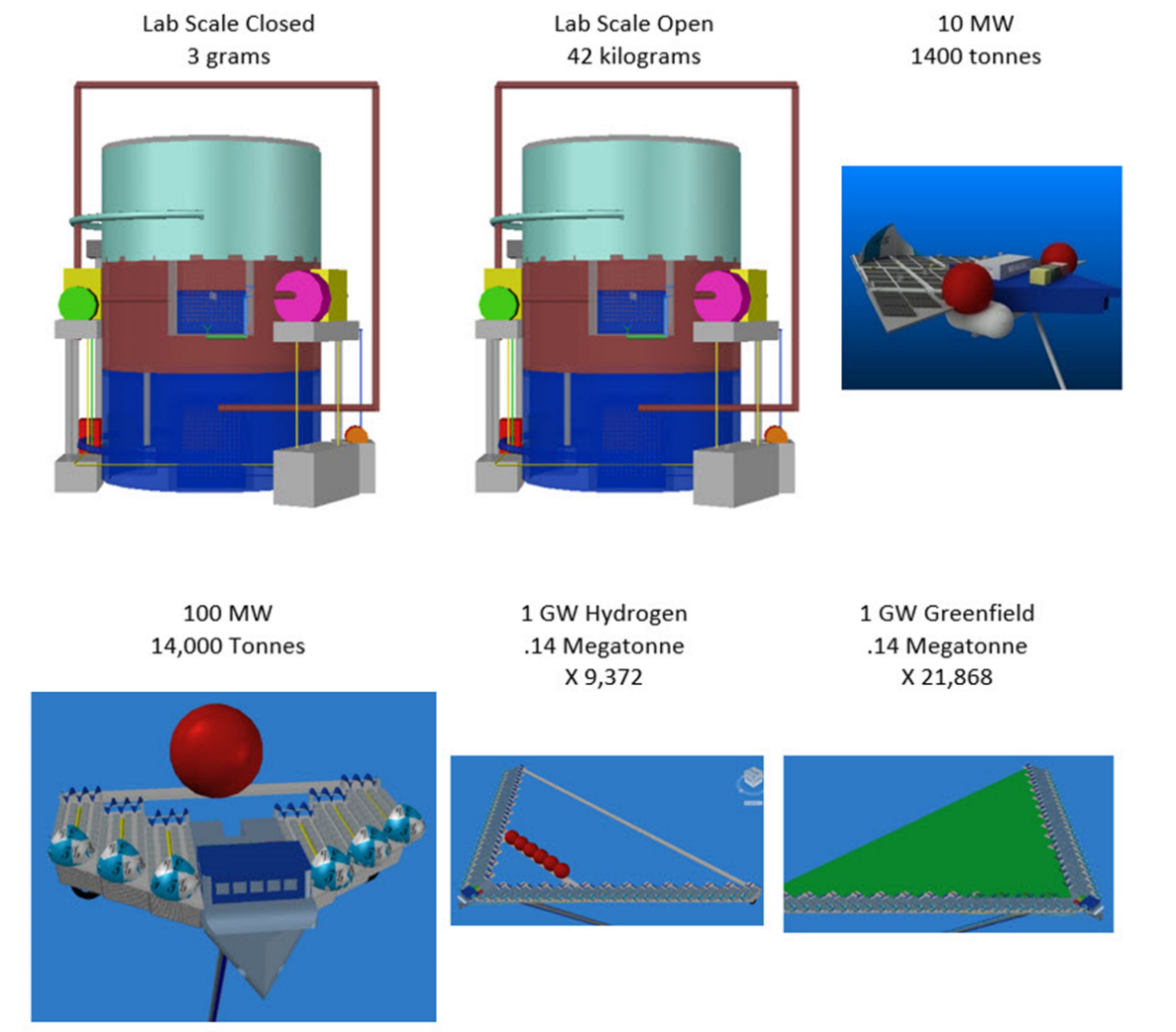 The fundamental knowledge that the prototype will provide makes this scaling possible.

The one gigawatts greenfield plants are capable of decarbonizing ever sector of the global economy. 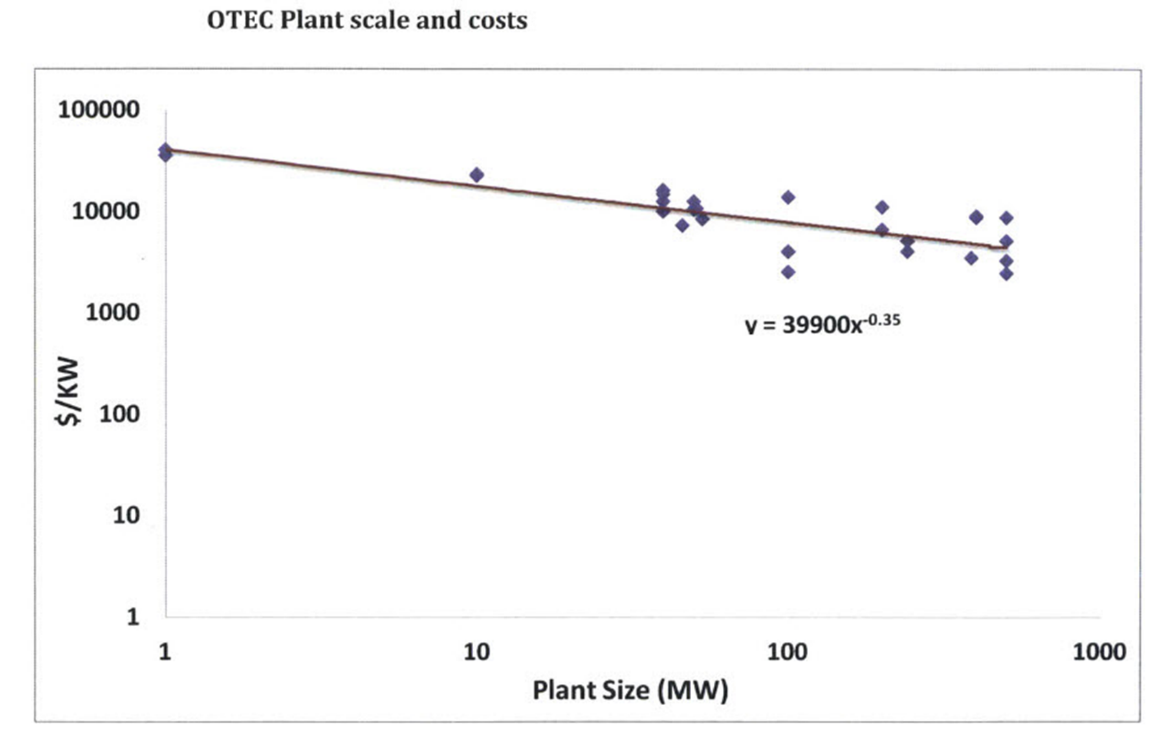 The trend line indicates, as plant sizes double the costs per kilowatt hour decreases by approximately 22%. Therefore, a one-fifth reduction in capital cost for every doubling of plant output that is a significant reduction that makes the technology attractive at large-scale outputs per the following.

Muralidharan noted there is a one third discount for deep water condenser designed ocean thermal energy conversion plants like TG due to their greater efficiency and the smaller size of the infrastructure. Particularly the pipes linking the surface and the deep which are about 1 order of magnitude smaller than for conventional OTEC.

The life of the plants and their capacities for the range of sizes is shown below.

The conventional wisdom is it is too costly to tap into this energy.

McKinsey, the consulting group, claims the cost of addressing climate change will require the nations of the world to invest $9.2 trillion a year for a total of $275 trillion by 2050. to transition to a low carbon economy that runs on 100% renewable energy,

TG provides that energy at a quarter of that cost.

When asked the question, “when it comes to climate change, you also seem more optimistic that investors will lead the way, rather than governments”, Stephen Poloz, former Governor of the Bank of Canada said. “Probably only 30 or 40 per cent of emissions come from companies that are traded on the stock exchange. So, the investor enforcement mechanism can’t cover everybody. But it’s very likely to through the competition effect. People are expecting it not just as investors, but as consumers.”

Larry Fink, the CEO and Chairman of the money manager Blackrock Inc. sees addressing climate change as a massive opportunity for new businesses.

"It is my belief that the next 1,000 unicorns--companies that have a market valuation over a billion dollars--won't be a search engine, won't be a media company, they'll be businesses developing green hydrogen, green agriculture, green steel and green cement," he said at the Middle East Green Initiative Summit in Riyadh, Saudi Arabia.

TG is the revenue generating carbon dioxide removal option that produces twice the energy of hydrocarbons, at the lowest levelized cost and highest capacity, can do this for at least the next 3000 years, has zero emissions, cools the ocean surface resulting in the reversing of the off-gassing of carbon dioxide from the tropical surface and mitigates every concern of climate change. It is the lead unicorn that can decarbonize every sector of the economy and provides a livable world.

It beats the competition on cost and results, but as Don’t Look Up tries to hammer home, indifference is the ultimate inducement to mass suicide.