Clean power has been buzzing for years now, but it truly feels like as we move out of the pandemic and look at spending to spur the economy, create jobs, and protect us from the perils of climate change that the clean and renewable energy industry has renewed purpose, excitement, and momentum.

The Clean Power Group on Energy Central is, as such, frequently one of the most popular and passionate groups, and because of that enthusiasm I’m always excited to introduce a new member of the Network of Experts to the mix.

Today, I want the community to heartily welcome Andrew Blakers, a Professor of Engineering at the Australian National University, where he’s worked on solar technologies since the 1980s. Having seen the development of this sector, as well as been a key part of numerous inventions and developments in his own right, Andrew is not surprised by the recent progress in the solar sector—but rather he seems all the room we have to do more.

As a Clean Power Expert, Andrew will look to add his voice and expertise to the mix across the community, and that starts with today’s interview he agreed to do as a part of the Energy Central Power Perspectives ‘Welcome New Expert Interview Series’: 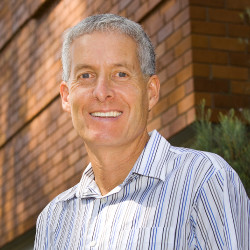 Matt Chester: This interview is one of the most direct ways we have to introduce you to the Energy Central Community so they know to keep you in mind as they have questions on your topics of expertise or to know why they should pay attention to your posts. So, can you give a quick background on what your background is in the utility industry and what your areas of expertise are today?

Andrew Blakers: I am a Professor of Engineering at the Australian National University. In the 1980s and 1990s I was responsible for the design and fabrication of silicon solar cells with world record efficiencies. I was co-inventor of the PERC silicon solar cell, which has 90% of the global solar market, cumulative module sales of US$70 billion and is mitigating about 1% of global greenhouse gas emissions through displacement of coal.

In recent years I’ve engaged in analysis of energy systems with 80-100% penetration by wind and solar photovoltaics. This is particularly relevant to Australia at the moment because solar & wind are being deployed 3-5 times faster per capita than in the USA, China, Japan and Europe. My team developed a comprehensive global atlas of 616,000 off-river pumped hydro energy storage sites to demonstrate the vast availability of mature, low-cost, and low-environmental-cost storage technology.

MC: You’ve been involved with solar PV technology since some of the earliest days, so you’ve gotten to see the technology develop. What was one of the biggest hurdles you saw get overcome in this space that maybe you didn’t expect to happen that quickly?

AB: Solar PV has had exponential growth for six decades, from a very small base. Now PV is being deployed faster than any other generation technology. PV and wind together constitute three quarters of global net new generation capacity. This phenomenal success arose from a combination of R&D and learning from doing (economies of scale).

In the last 5 years solar PV has gone from insignificant to dominant. Silicon PV has remained at about 95% of the global solar market, by constantly reinventing itself. 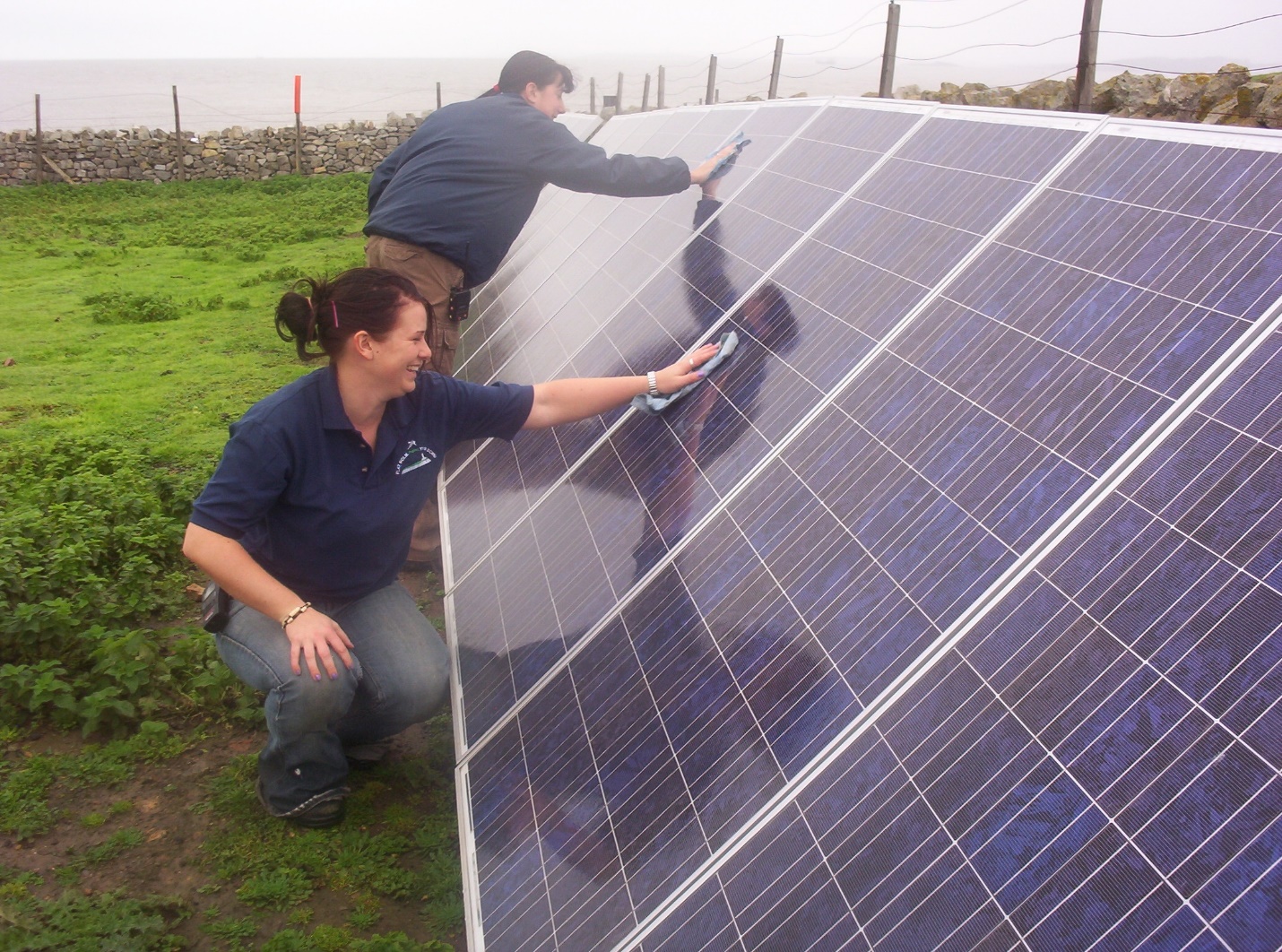 MC: For utility leaders of today, what’s the most important consideration they should keep in mind as they look to add more solar to their portfolio in the coming years?

AB: It is the nature of exponential growth that change seems to happen “overnight” -- think how fast COVID got away. PV was dominant in capacity markets in 2020. In 2030, solar and wind will be dominant both in terms of new capacity and total deployed capacity.

This entails doubling electricity production and doubling transmission capacity. When the chemical industry is electrified (mostly via electrolysis of water to obtain hydrogen atoms for production of ammonia, steel, plastics, synthetic jet fuel, and the like) then U.S. electricity sales will be in the range of 10 terawatt-hours (TWh) per year. Utilities can look forward to rapid growth in sales.

This is the fastest energy change in history. Get ready!

MC: Are you confident that various companies, regions, and countries will be able to reach 100% zero carbon generation? What’s the biggest hurdle standing in the way today?

AB: Technically and economically, getting to 100% is straightforward at low cost. Australia and the state of South Australia are convincingly demonstrating this.

The biggest barrier is the strong vested interest of fossil fuel companies and their formidable lobbying power. Recall how tough it is to reduce the impact of that other destructive smoking industry, cigarettes.

MC: What motivated you to get more involved with the Energy Central Community—what’s in it for you? And as an expert on Energy Central, we’re definitely looking forward to the insights you’re going to be able to bring—so what value are you hoping to impart to your fellow community members?

AB: The United States is the world’s largest economy. It is a global leader of innovation and industry and a major greenhouse emitter. It looks a lot like Australia in terms of economy, society, land mass, solar & wind resources, except that it has a 13 times bigger economy. However, the United States is installing solar and wind much slower per capita than Australia. Australia has generally followed the U.S. On this occasion, perhaps Australia can help the United States,  for the sake of our preserving a living planet for our children.

AB: A 90-100% solar/wind global energy system entails cheaper electricity, stable and reliable power from a networked system of millions of solar panels and wind turbines spread across millions of square km provide a high degree of energy robustness in the face of a pandemic, war, or trade disruption. There is elimination of most greenhouse gas emissions; minimal utility for warfare, terrorists or criminals; vast resource availability for billions of years; elimination of most water use from the energy system; an infinite supply of raw materials; no radiation leaks; no oil spills; no oil-related warfare; no fracking for gas; no strip mining for coal; no coal mine fires; no smokestacks; no vehicle exhausts; and minimal smog.

Thanks again to Andrew Blakers for joining our Expert Network and sharing his time and experience with the community. As you see Andrew engaging across Energy Central, be sure to share any comments or questions with him to tap into his wealth of knowledge!

The photo accompanying your introduction shows two smiling workers wiping down solar panels on an overcast day. What percentage of their rated capacity, in your opinion, were they producing at the moment?

Currently two countries - Iceland and Norway - generate more than 90% of their electricity needs with renewable energy. Both have abundant but unscalable natural resources (geothermal and hydropower), generate virtually none of their electricity from solar panels or wind turbines, and combined, are home to less than 1% of the global population. What evidence do you have that solar will ever be capable of meeting the electricity needs of the other 99%?

Well, 500km away it was a windy and sunny day, so no problem. The new off-river pumped hydro system stored some of that energy to help power the city overnight.

To the chagrin of the gas turbine operators, the flock of new 100-500 MW batteries are killing their peaking market because batteries respond far faster and more accurately to grid disturbances. Thus, gas generation, currently 5% in the National Electricity Market, is heading for the basement.

Mr and Mrs Ordinary contracted for a new 8 kW rooftop PV system that will pay itself back in 4 years, joining the 25% of the nation that has rooftop solar.

"Well, 500km away it was a windy and sunny day, so no problem. The new off-river pumped hydro system stored some of that energy to help power the city overnight."

Though your enthusiasm is admirable, Andrew, of course you don't know that on the particular day the photo was taken it was windy and sunny 500km away. It reveals an assumption, often shared by renewables advocates,  that it will never be calm or cloudy across several time zones simultaneously - that they will no longer be forced to resort to fossil fuel power, as they have in the past, to provide power for essential services.

We can all cherry-pick statistics to support our favorite source(s) of energy. But the graph below, from Australia's Department of Industry, Science, Energy, and Resources, shows that in your country as a whole, renewables make up a far smaller percentage of energy needs than they did even forty years ago: 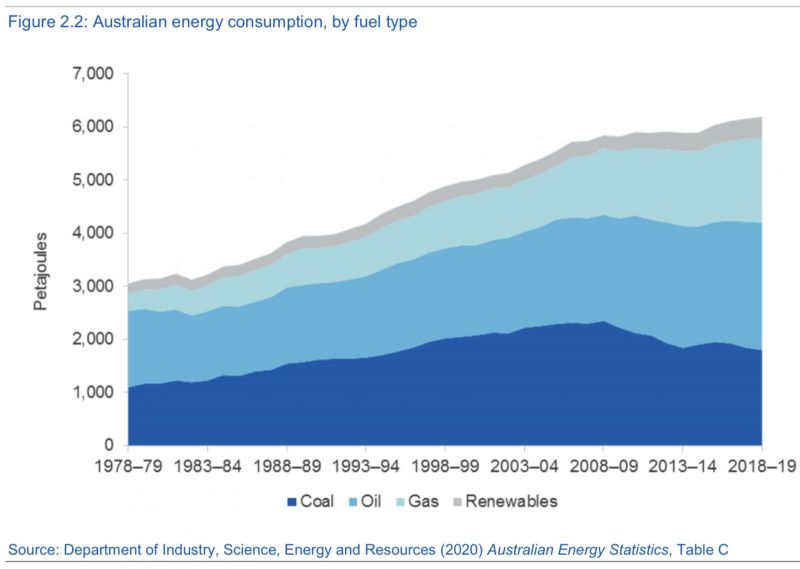 It shows that energy from renewables has remained relatively unchanged, and that methane ("natural gas") and oil have expanded to accomodate increased consumption and offset an 18% drop in coal generation.
From this graph, what gives you confidence that Australia is meeting the obligation, shared by all of the world's countries, to drastically lower carbon emissions as quickly as possible?

Over in South Australia, the 6-month moving average solar+wind fraction reached 70%, and is tracking towards 100% in 2024-25

Wow, 70% today is a terrific number-- I have to imagine that's world leading? The only other areas that seem to reach such high penetration of renewables are those that are blessed with natural hydropower resources, but it looks like SA took the hand they were dealt (great solar irradiance and abundant space) and are doing the same thing