Posted to GridIntellect, LLC – A Veteran-owned Company in the Digital Utility Group 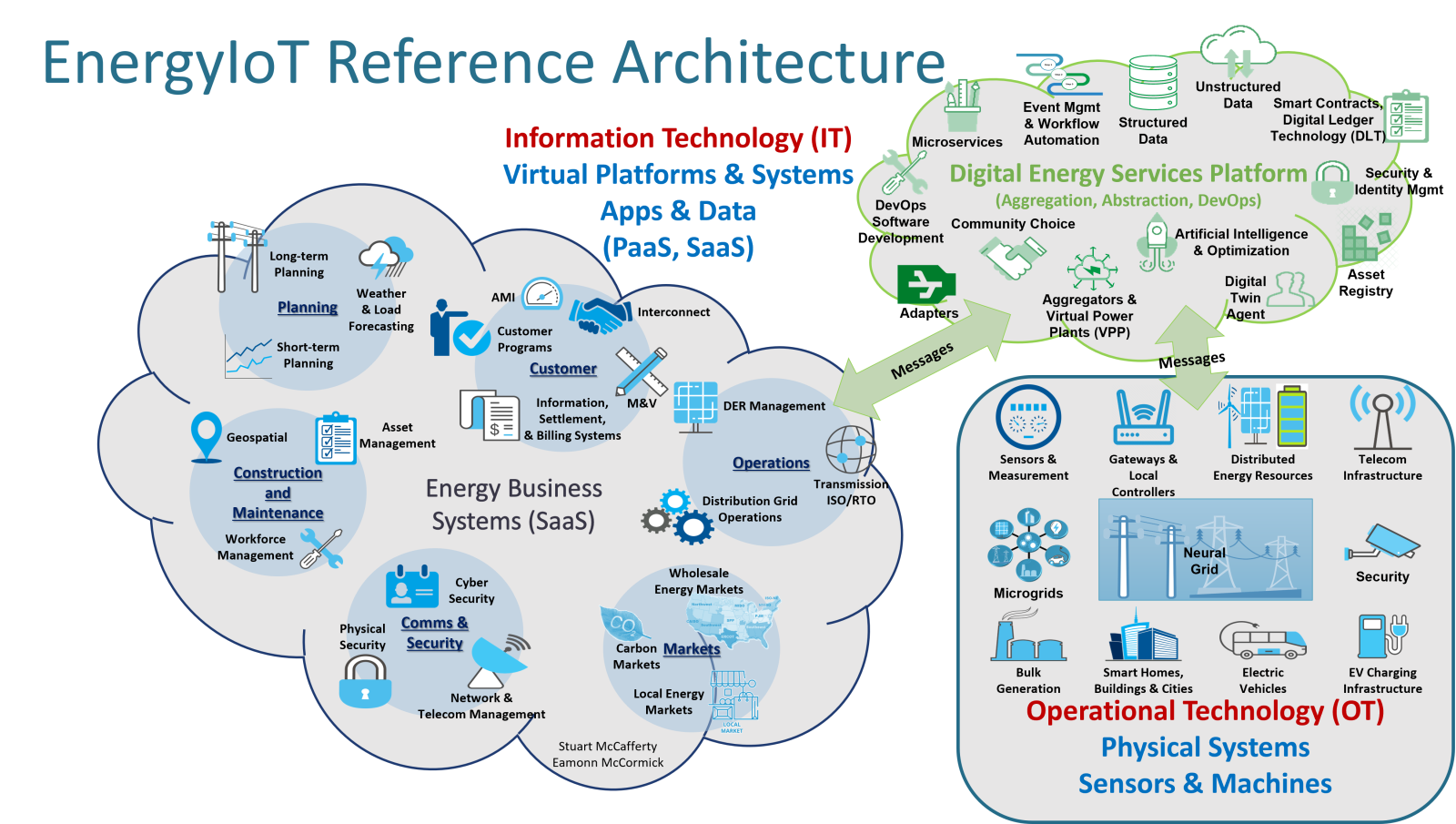 California has it right!  In 2019, the California Public Utilities Commission (CPUC) created the “Rule 21” mandate for integrating behind the meter Distributed Energy Resources (DER).  This was primarily directed at rooftop solar that is being installed at record pace and is now a lawful requirement for all new construction.  The ruling requires that all inverters connected to the grid must comply with IEEE 1547 interconnect requirements and one of three communications protocols:

Why?  Plain and simple it is for one thing:  INTEROPERABILITY!  The CPUC created these requirements because:

The CPUC recognized that having a small set of communications protocols and information models would help them achieve their aspiration of an interoperable grid that supports democratic participation and a decarbonized electricity ecosystem.

2030.5 was previously named the Smart Energy Profile (SEP) and was developed by the Zigbee Alliance as a metering communication solution primarily to coordinate with behind the meter building energy devices.  It was adopted and ratified by IEEE and is now on Version 2.  But, the standard has been around since 2009 and has evolved to a very rich standard and a growing ecosystem supporting testing and certification for interoperability and security compliance.  It is one of the few true “energy IoT” standards developed for modern grid communications, distributed intelligence, and interoperability.  OpenFMB™ is another IoT standard that also has incredible implications to support a nimble and neural grid as it matures.

IEEE 2030.5 is based on the Common Information Model (CIM) that was developed by the International Electrotechnical Commission (IEC) standards organization.  If it is not immediately obvious, this is a really good thing!  It leverages an international information model that makes interoperability more likely and achievable – something the electric power industry has really struggled with.  The other really great thing about this is that it is message-based communication, not the register-based old-style communications where centralized SCADA systems flip bits on grid assets to control their behavior.  This old style of command and control requires register mapping and is prone to mistakes that are difficult to troubleshoot and correct when things go wrong.  Nowadays, most grid assets are intelligent and instead of controlling them, centralized and localized grid management systems can tell the asset what they want it to do instead of doing it to them.  If something does go wrong, then it is easy to troubleshoot by checking to see if the correct message was sent, if it was received, and how the asset behaved when the message arrived.  Easy peasy.

The 2030.5 standard was designed for aggregation and hierarchical coordination, supporting a wide range of IoT use cases, and especially for Distributed Energy Resource (DER) visibility, situational awareness, and coordination.  So, new requirements such as FERC 2222 that necessitate that Transmission System Operators (TSOs) provide DER aggregators with market participation opportunities are inherently cooked into the architecture using physical “gateways” to aggregate DERs and that can even aggregate other gateways in parent-child hierarchical relationships.

The IEEE 2030.5 standard also maps rather neatly with our EnergyIoT Reference Model and is the enabling technology that helps our common reference architecture develop REAL solution architectures.  Therefore, over the past couple of months, we have been doing exactly that in-between projects and trying to help our industry think beyond point solutions and to “think IoT” when developing architectures.  We hope to leverage modern standards and a common reference architecture to develop more interoperable solutions, create a greener grid, support more DER use cases, increase grid resilience, and create new opportunities for innovation and participation. 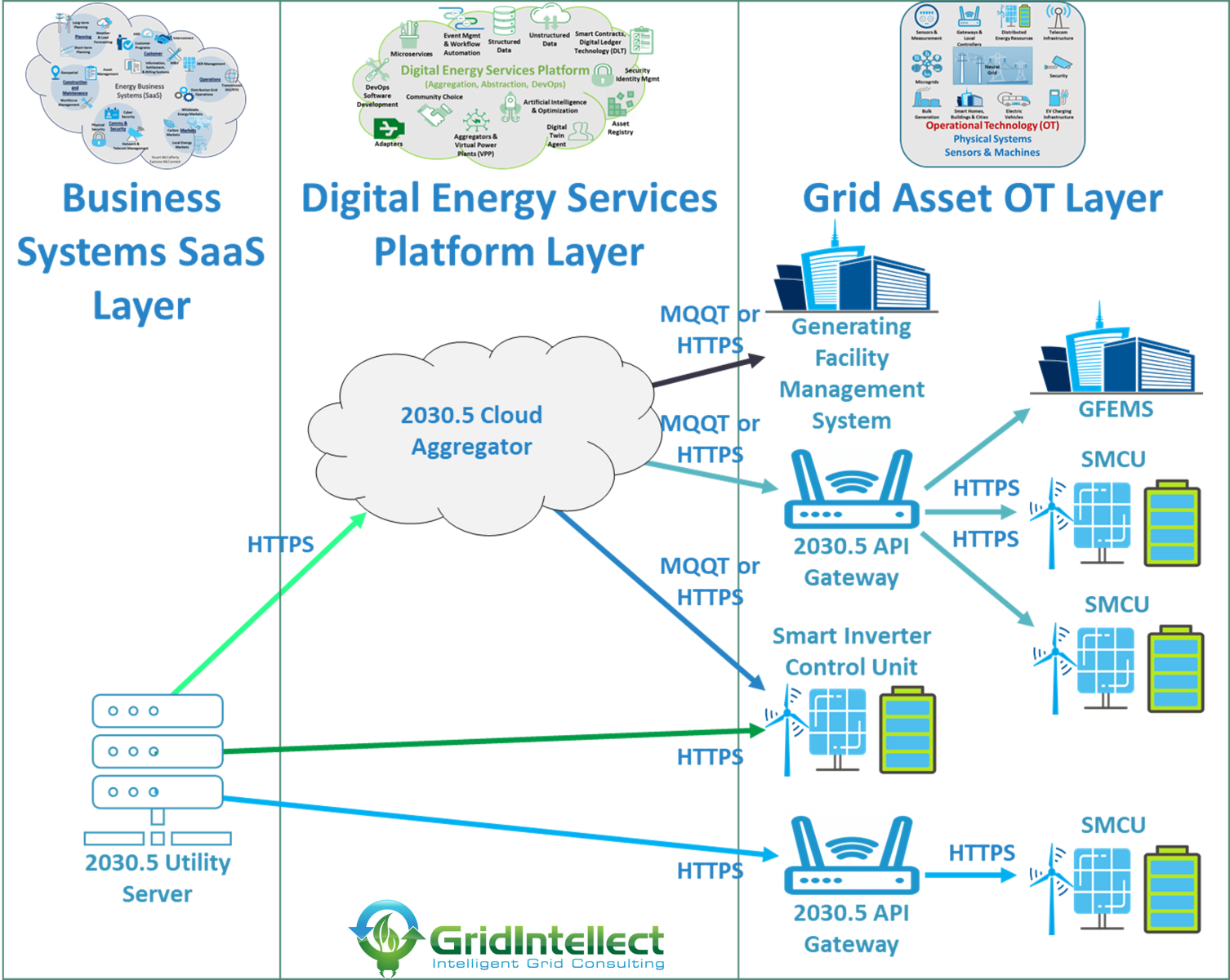 The above image shows the relationship of the 3 IEEE 2030.5 layers to the 3 logical layers of the EnergyIoT Reference Architecture.

The aggregator is really the intelligent piece of the 2030.5 architecture.  It monitors all of the gateway assets, groups them into logical units, manages the DER system of record, updates the available capacities, and provides dispatch schedules to the gateways based on the utility server’s requests.  It also monitors dispatch events and collects behavior and performance information to support analytics and other metrics.  The Australian company, SwitchDin, includes a DER registry “system of record” that can be leveraged by the utility to support grid planning and even grid connectivity and power flow models.

So in summary, the architecture of IEEE 2030.5 is an IoT methodology consistent with the EnergyIoT Reference Model where:

The EnergyIoT Reference Architecture is freely available on Energy Central with the same intent of the IEEE 2030.5 standard to create interoperable solution architectures from the customer to the utility and the TSO.

Enhancements to the EnergyIoT Reference Architecture

We developed the EnergyIoT Reference Architecture in late 2018 and published it on Energy Central in the first quarter of 2019 as a series.  Since then, we have made a couple of enhancements and we might need to retouch the published series – but we haven’t done that yet.  However, here are the changes we have made in case you decide you are interested in reviewing the EnergyIoT articles and notice some differences:

Figure 4:  Changes to EnergyIoT Reference Model Made Since April 2019

Other than that, there are no other changes, but if you see something that you feel is missing, please provide a comment below.

Lately, Stuart, Eamonn, and David have been developing solution architectures for wind farms, microgrid fleets, behind the meter customer DER (connected communities), and EV fleet charging with the intent of integrating them with utility operations and markets.  We use the EnergyIoT Reference Model as the starting point and map the IEEE 2030.5 architecture to the affected architectural elements.  It doesn’t address all of the potential electric power grid use cases, but it has really helped us to recognize the different business systems, energy services, and OT assets that need to be addressed within each DER use case architecture.  The whole point of this simple exercise is to easily communicate what can be some fairly complex relationships in an architectural drawing that people at all levels of an organization can understand.

As an example, this is a simple layered architecture view we developed for EV fleet charging that uses the IEEE 2030.5 standard: 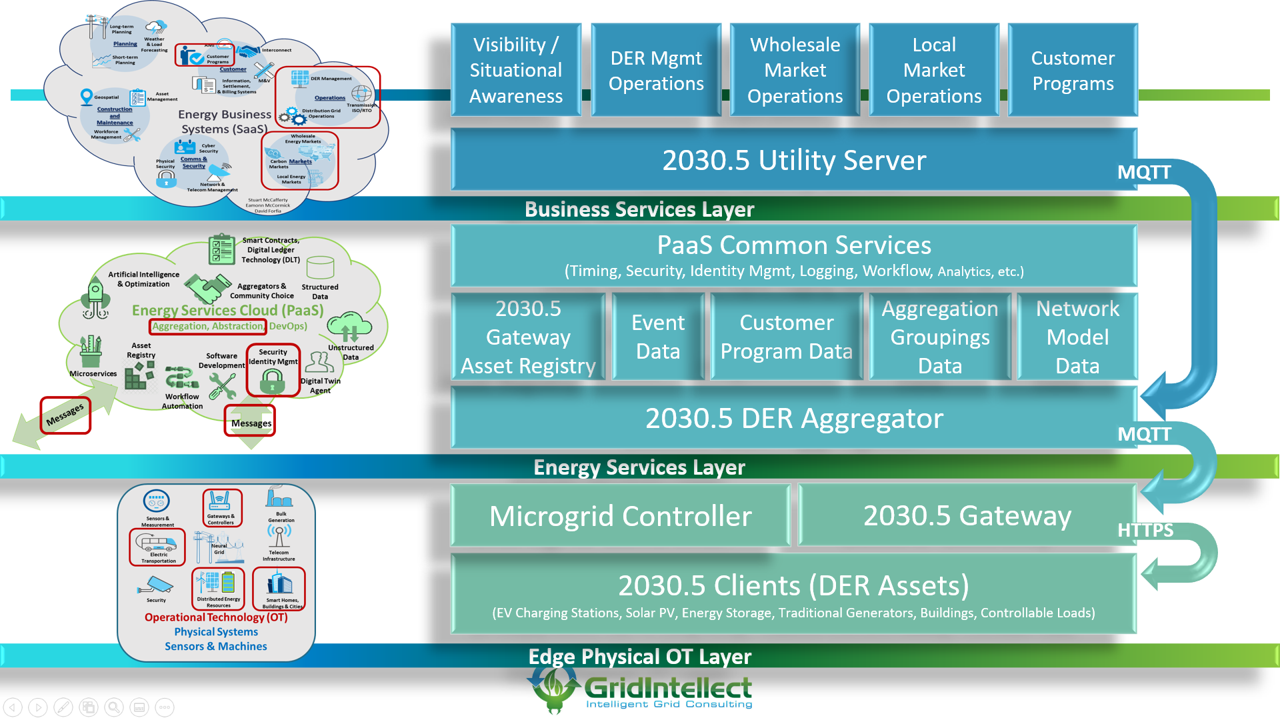 You will quickly recognize the key architectural layers for both the EnergyIoT Reference model and the mapping to the 2030.5 layers.  There are obviously other architectural drawings that are needed, but this simple architectural depiction is a good start if you are working with a variety of different stakeholders showing the use of this very important DER integration standard.

We have educated ourselves on IEEE 2030.5 and have also been working with the SwitchDin folks Down Under where they have been applying a very similar methodology for a variety of DER integration use cases.  There are some excellent resources available for anyone interested in learning more about this standard:

IEEE 2030.5 answers many of the issues surrounding DER integration – for grid services, markets, and even EV charging.  The CPUC should be commended for their foresight in establishing IEEE 2030.5 as one of California's required standards for grid-connected inverters and it would be smart for other state PUCs to consider following their lead.  This will help drive the vendor community to quickly adapt and build DER assets that are as close to plug-and-play ready as they can be.  For us to truly capture the value of connected DERs, they must interoperate with utility systems to support grid services and market participation.  IEEE 2030.5 is definitely a step in the right direction that embraces the concept of distributed intelligence, the Internet of Things, and uses modern messaging communication protocols.

We are happy to make introductions to any of the companies discussed in the article - contact Stuart.  DER solutions are available today, and the EnergyIoT Reference Model and IEEE 2030.5 protocol are excellent resources to help you get started with your own disruptive solutions.