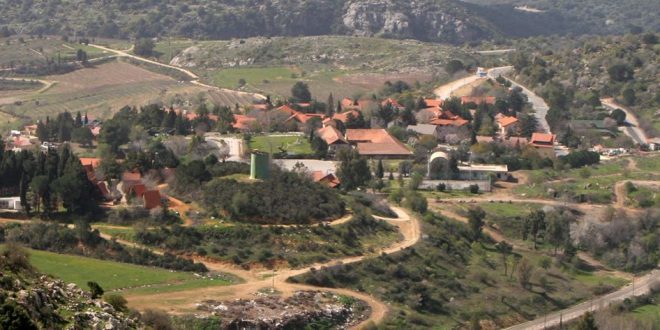 Israeli energy company, Energix Ltd. (‘Energix’), is taking advantage of the COVID-19 lockdown in the occupied Syrian Golan (‘Golan’) to develop sites for its harmful wind farm project. Accompanied by Israeli police, Energix representatives are visiting project sites to demarcate plots and erect signs. Meanwhile, due to COVID-19 movement restrictions, Golani Syrians are grounded in their homes, unable to monitor or peacefully protest Energix’s activities. Those that have risked their health to venture out and film Energix and Israeli police visits to project sites have subsequently been harassed and questioned by the police.

Despite countless objections from the Syrian population, Energix obtained approval from the Israeli government in January of this year to build 25 wind turbines on Syrian agricultural land adjacent to two of the remaining Syrian villages in the Golan. With a maximum height of 220m, the approved turbines could be some of the tallest onshore turbines in the world and would occupy around a fifth of the agricultural land still available to Syrians in the Golan.

In addition to violating international law, Energix’s wind energy project has been marked by a strategy to manipulate and intimidate the Syrian population. This culminated in Energix suing Al-Marsad and members of the Syrian population under Israel’s controversial ‘Anti-Boycott Act’ last year in an attempt to silence the organisation and others who expressed concerns about the project’s legality and impact on the Syrian population. Energix has subsequently withdrawn five lawsuits against Golani Syrians and, in March, was ordered by an Israeli court to pay up to $5,000 USD per person for legal expenses. The case against Al-Marsad is ongoing. However, at a February hearing, Al-Marsad rejected a possible settlement that would have meant compromising its work and instead reaffirmed its intention to fight the baseless case.

Meanwhile, the UN Special Rapporteurs on the Situation of Human Rights Defenders; Issue of Human Rights Obligations Relating to the Enjoyment of a Safe, Clean, Healthy and Sustainable Environment; and, the Promotion and Protection of the Right to Freedom of Opinion and Expression have written to the Israeli government and Energix. In a 12 page letter, the Special Rapporteurs outline their legal concerns with Energix’s project and lawsuits, asking for more information and clarification on nine key issues. The Israeli government responded last month, failing to meaningfully address any of the legal issues that the Special Rapporteurs raised. Israel does not dispute any of the facts in the letter, which implicate various violations of international law, and continues to defend its universally condemned ‘Anti-Boycott Law’ as it is used to supress human rights work. Most strikingly, Israel claims it duly considered objections to Energix’s project prior to the project’s approval, despite the fact that it ignored a petition with over 6,000 signatures rejecting the project and comprehensive legal and environmental problems experts had raised during the project’s licensing phase.

As Energix manipulates a global health crisis, under the direct protection of Israeli security forces, lawful and legitimate protest has been extinguished from the Golan. Still, the Syrian population is seeking to pursue new avenues for justice as more than 20 Syrians are now attempting to nullify land contracts with Energix, and Al-Marsad, with partners, is contemplating a new petition to the Israeli Supreme Court to halt Energix’s work. Al-Marsad calls on the international community, in line with multiple UN Special Rapporteurs, to support its work and the Syrian population in the Golan now more than ever as the risk of irreversible harm by Israel and corporate interests increases.