A lot happened in the energy sector in May. The targets for CO2 emission reductions in the Climate Protection Act were tightened. A full exemption from the EEG levy for green hydrogen is in sight. The CO2 lead contract has reached record prices.

At the end of April, the German Federal Constitutional Court declared the Climate Protection Act unconstitutional in parts. The climate act originally took effect in the end of 2019. Several lawsuits were filed by a number of climate protection organisations earlier in 2021. It was criticised that the reduction of greenhouse gas emissions is insufficient and that the targets given so far will not be able to keep the global increase in average temperature below 2 degrees. The judges in Karlsruhe demanded appropriate improvements by 2022 (source: PV-Magazine).

Less than two weeks later, the German government presented a new draft in the second week of May. The national emissions reduction target by 2030 is to increase from 55 per cent to 65 per cent compared to the base year 1990. In 2040, the goal is an 88 per cent reduction. Greenhouse gas neutrality is to be achieved in 2045, and negative greenhouse gas emissions are to be realised after 2050. This means that CO2 will have to be removed from the atmosphere.

The energy industry in particular has to bear a large part of the GHG emission reductions. This is also clearly shown in Figure 1. The new draft proposes a 2030 target for the energy industry that reduces CO2 emissions by one third more than before. Instead of the originally planned 175 million tons, the energy sector may only emit 108 million tons in 2030. The permissible annual emission volumes have also been reduced in the transport and industrial sectors. For example, maximum emissions from the transport sector in 2030 were limited from 95 million tons to just 85 million tons. The reform of the Climate Protection Act is due to take place this summer and thus before the end of this legislative period (source: German Federal Ministry for the Environment). 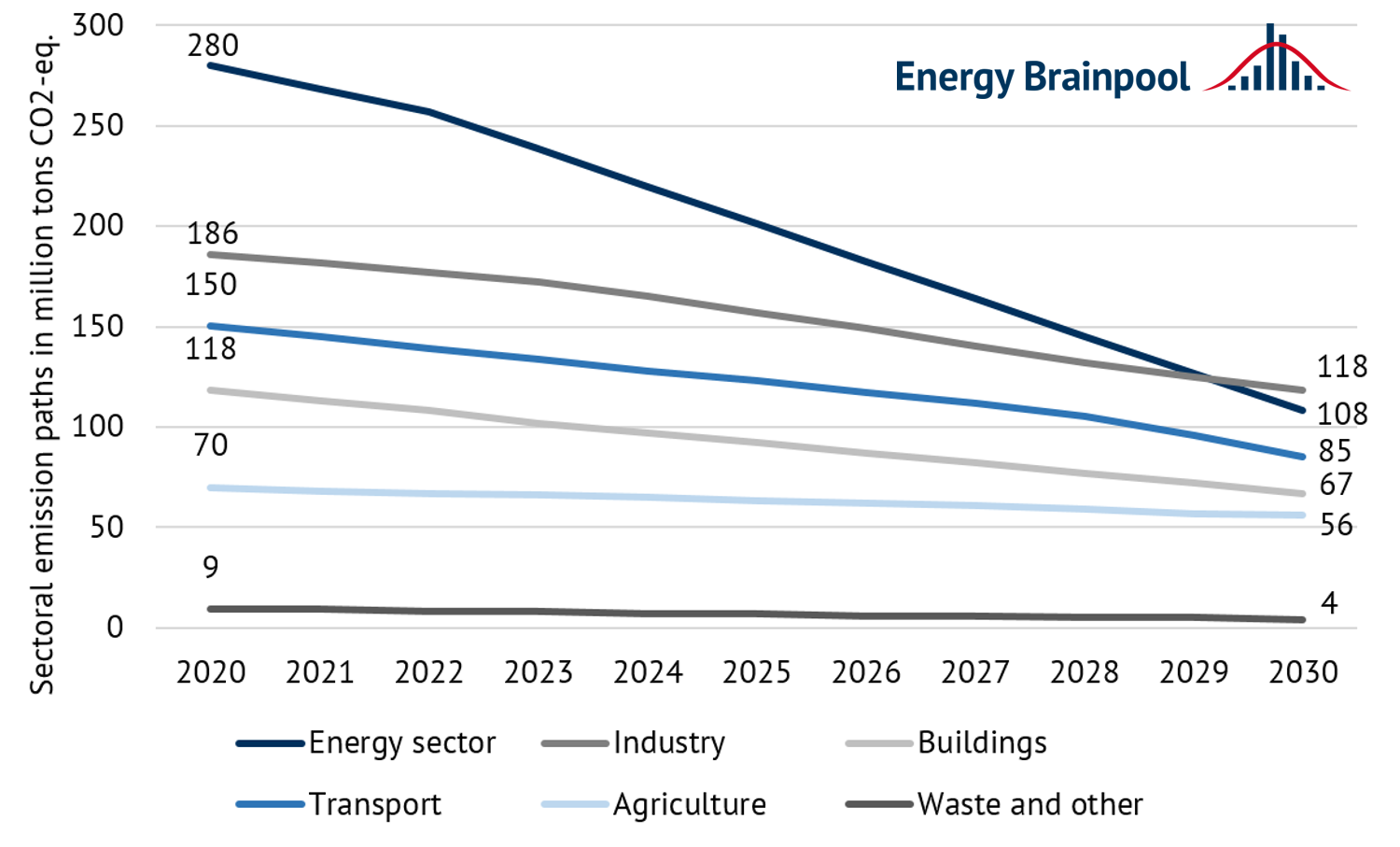 In our analysis of the new climate protection law, we discuss in detail the impact of the new emissions targets on the energy industry. One thing is clear: the coal phase-out must take place before 2030 or a higher share of renewables is necessary.

On May 19, the cabinet approved a regulatory package to implement the EEG 2021. Among other things, the package regulates the renewable energy levy (EEG levy) exemption for green electricity used to produce hydrogen and is scheduled to take effect in January 2022.

The levy exemption only applies to electricity from renewable plants that do not receive financial support via the renewable energy act. Furthermore, 85 per cent of the green electricity used must come from the German bidding zone, and 15 per cent can come from a price zone that is electrically connected to the German one. In addition, the EEG levy exemption is limited to 5,000 full load hours of the electrolyser. In order to favour market development, there is no specification on the location criteria for electrolysers. These will not be determined until 2024 (source: Energate).

The legislation provides that companies can choose between two variants. One is a reduction of the levy via the special compensation scheme and the other is a complete exemption from the EEG levy. Article § 69b EEG 2021 provides for a complete EEG levy exemption for green hydrogen. As already mentioned, the precondition is that the hydrogen is “green” by definition of the EEG. Article § 64a EEG 2021 provides for an non-bureaucratic application of the special compensation scheme: For electricity-cost-intensive companies, the EEG levy is limited to 15 per cent upon application, provided that the electrochemical production of the hydrogen makes up the largest contribution to the company’s total added value. For this, the hydrogen does not necessarily have to be green. Use of both reductions is mutually exclusive.

Until mid-May, there were bullish signals from CO2, gas and coal. These again drove the power front year up. On May 14, the Cal 22 traded at a 12.5 year high of 68.90 EUR/MWh. Five days later, on May 19, the front year lost almost 2 EUR with a downward correction in the CO2 price (source: Montel). Towards the end of the month, the front year followed weaker CO2-prices and lost close to 5 per cent since its 12.5 year high.

The leading CO2-contract rose 18 per cent by mid-month, reaching a record high of 56 EUR/ton. Due to profit-taking and the introduction of trading in UK emission allowances, the EUA price subsequently fell by 10 per cent to trade at 49 EUR/t.

Gas and coal prices followed the lead CO2-contract. The gas price was also supported by low storage levels and below-average temperatures during the month (source: Montel).

Ups and downs for wind energy

The monthly share of renewables in electricity generation in Germany in May was just under 60 per cent. There was little fluctuation in solar feed-in and it stood at around 20 GW on average during the day. In the first and the last third of the month, wind feed-in was particularly high and close to 45 GW at times. At these intervals, the residual load slipped into negative territory, although some conventional power plants reduced their output to compensate for the surplus electricity. The surplus electricity was mainly exported. Towards the middle of the month, however, electricity had to be imported because renewable feed-in was very low (source: Energy Charts).

Figure 3: Power generation and demand in May 2021 in Germany (source: Energy Brainpool).