A Charlottesville nonprofit group says point-of-sale rebates and inventory requirements for dealers could help the commonwealth catch up with its neighbor.

More than half of Virginians are amenable to electrifying their next ride. But both a shortage of car lot inventory and a lack of point-of-sale rebates are stalling the electric vehicle adoption rate at below 2% statewide.

Lifting those barriers could put Virginia in alignment with its EV-friendlier neighbor Maryland, according to a report released by a Charlottesville nonprofit Wednesday.

Stuart Gardner, director of Electrify Your Ride, a Generation 180 initiative, said 13th place is nothing to sneeze at. But he noted that Virginia could leapfrog Maryland with a few policy nudges.

“What we’re saying is, here’s all this potential,” he said in an interview. “Virginia is doing fairly well, even without incentives, and the people are already receptive to electric vehicles. What we’re missing are the cars.”

Through 2019, about 24,000 electric vehicles — battery-electric models and plug-in hybrids — were part of the mix of 7.5 million registered vehicles on Virginia roads.

Publication of the Virginia Drives Electric report is timed to prod legislators to act on at least three key measures during their next session, scheduled to begin in January.

To accelerate electric vehicle growth, the report authors recommended that the General Assembly and state officials:

“We’re looking at speeding adoption along,” Gardner said about the three intertwined policies. “These are relatively easy levers to pull to help clean up transportation.”

In June, state utility regulators wrapped up a comment period connected to vehicle electrification. Specifically, the State Corporation Commission gathered perspectives on how energy storage, public charging stations and the intricacies of rate design mesh with affordability and reliability of electricity service to consumers.

A Democratic-majority General Assembly took huge steps earlier this year to green the electric grid by passing the Virginia Clean Economy Act and other measures.

Democratic Gov. Ralph Northam has clearly stated that the transportation sector — the leading source of emissions — is next in the decarbonization line as it accounts for at least 45% of the state’s heat-trapping gases. That figure is higher than it is in many states.

Gardner and his colleagues noted that the state is likely discouraging electric vehicle adoption by increasing the highway use fee in July, part of the registration costs that owners pay upfront.

“We need to do everything we can to speed the adoption of electric transportation to support the state’s long-term carbon-reduction goals,” said Wendy Philleo, executive director of Generation 180. “Putting pro-EV policies in place is the best next step.”

Maryland has an edge for EV shoppers

Through mid-October, Virginia car dealers have sold about 8,820 electric vehicles. But that’s just a puny portion of the hundreds of thousands of new cars and light-duty trucks driven off lots statewide each year.

“We sell a lot of vehicles in Virginia,” Gardner said about the 430,000 new ones sold in 2019. “If we could just increase that EV number a little bit, what a difference it would make.”

Emily Morrison of Charlottesville was trying to pitch in to tilt that electric vehicle figure upward in June. Seeking a second car, she test-drove a Hyundai Kona. When she returned to the dealer a few days later, it had already sold.

“The dealer hadn’t reached out in the interim,” Morrison said about her disappointing experience. “And all he told me was he didn’t have any in stock and there weren’t any others on the East Coast.”

Her two science-oriented daughters — ages 15 and 17 — and their passion for the planet had initially convinced their mother to pursue an electric car. A family friend even tracked down two other Konas after the first deal fizzled.

“But one was in Pennsylvania and the other in Maryland,” Morrison said. “That was just too far to travel.”

The 43-year-old ended up purchasing a hybrid car in Virginia and “I love it.” But it still annoys her that the dealer seemed so ambivalent about losing an electric vehicle sale.

“In a typical sales environment, dealers would be more apt to move EVs if they were being incentivized,” she said. “That dealer’s attitude was, ‘We’re all sold out. Good luck to you.’”

Morrison likely would have had better luck if she had a Maryland address.

Overall electric vehicle inventory was 44% to 54% lower in Virginia cities than in comparable Maryland cities, according to Generation 180 researchers. It’s especially relevant that sought-after models such as the Toyota Prius Prime and Hyundai Kona were seven to 10 times more available in Maryland than in Virginia.

Those snapshot results are from an inventory survey the Green Energy Consumers Alliance conducted on Oct. 22 at six cities in each neighboring state.

Maryland made for a fair and convenient benchmark because it’s next door, but more EV-friendly, Gardner said. He added that Maryland will continue to win out on inventory unless Virginia follows the lead of its northern neighbor by joining the Advanced Clean Cars Program.

“Otherwise, Virginia will continue to be left out,” Gardner said. “Auto manufacturers prioritize states that belong.”

Falling farther behind would be an especially hard blow, he said, as manufacturers are on the verge of introducing a wider range of electric cars, including pickup trucks and SUVs. Industry groups estimate nearly 40 new and refreshed electric vehicle offerings will roll out through next year.

“There are lots of options coming to replace the big gas guzzlers.” 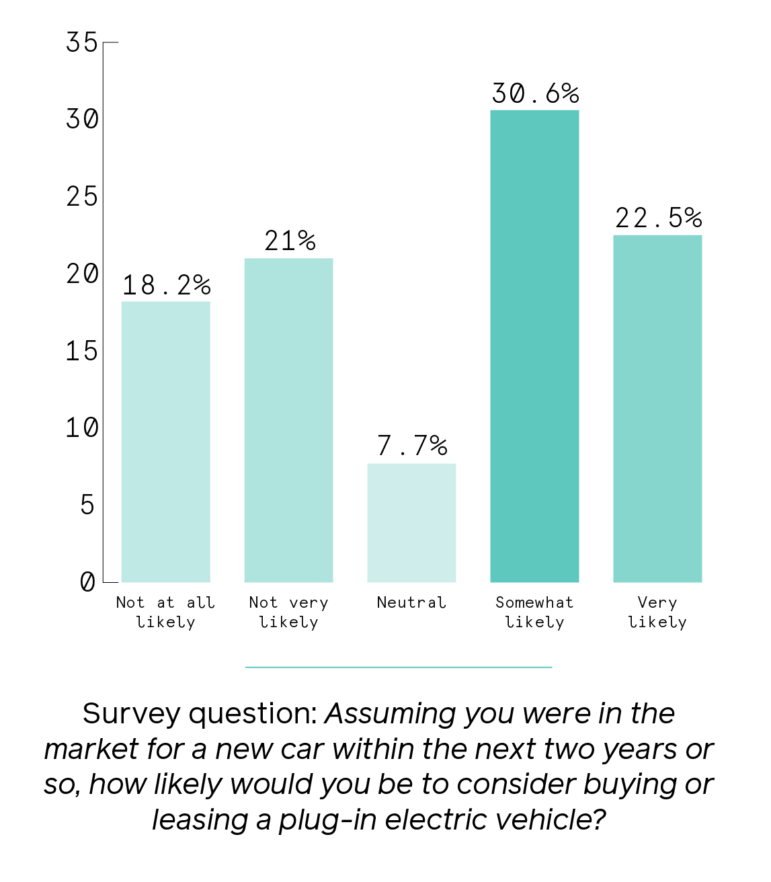 A graphic provided by Generation 180 illustrates responses to a survey question about how likely respondents were to buy an electric vehicle. Generation 180 / Courtesy

Virginia catching up on charging infrastructure

Some 53% of the 1,104 adults queried online said they were “somewhat” or “very likely” to consider purchasing an EV as their next car. As well, more than 70% of the respondents said they not only had a positive view of electric vehicles, but also would support a range of state incentives.

EVs are now more expensive upfront than gasoline-powered cars, but cheaper to repair and maintain. Industry experts expect EVs to reach cost parity between 2024 and 2027.

As jazzed as Morrison was about an EV purchase, she admitted that a top concern was a lack of charging infrastructure she would need for trips around Virginia and to North Carolina. More than half of the survey respondents had similar worries.

Not surprisingly, Maryland is also outpacing Virginia on this front, but not by much. Virginia has enough chargers to support 24,000 EVs, while Maryland’s additional 343 plugs can handle 25,000 EVs, according to the U.S. Department of Energy’s Advanced Fuels Data Center.

“When you consider that Virginia is over three times the size of Maryland, geographically speaking … it’s troubling that the Commonwealth would be this far behind,” the report authors wrote.

However, they noted that Virginia is expanding its statewide network via the Department of Environmental Quality’s $14 million contract with Los Angeles-based EVgo Services. Those dollars are from the Volkswagen pollution mitigation settlement. The goal is for 95% of Virginians to be within 30 miles of a charger.

Gardner is aware that even a full conversion to EVs won’t solve all of Virginia’s transportation woes. But he emphasizes it could provide key environmental and public health benefits because Virginians drive an estimated 234 million miles daily.

And there’s another overarching statistic from the nonprofit Rocky Mountain Institute that weighs heavily on his team. The United States needs to electrify 40 to 50 million light-duty vehicles in the next decade to match the central aim of the Paris Climate Agreement.