This item is part of the Special Issue - 2020-10 - Distributed Energy Resources, click here for more

Conventionally, consumers purchase electricity from utilities or retailers through fixed tariffs or, for example, though time-of-use tariffs., Prosumers (consumers that also produce electricity) may sell surplus electricity back to the grid at a “buy-back rate”, as shown in Figure 1 (Liu et al., 2019). However, consumer tariffs for electricity supply are generally much higher than the buy-back rates that prosumers can obtain from selling electricity to the utility. Therefore, the new P2P business model may have monetary benefits for both consumers and producers, comparing to the other business models. 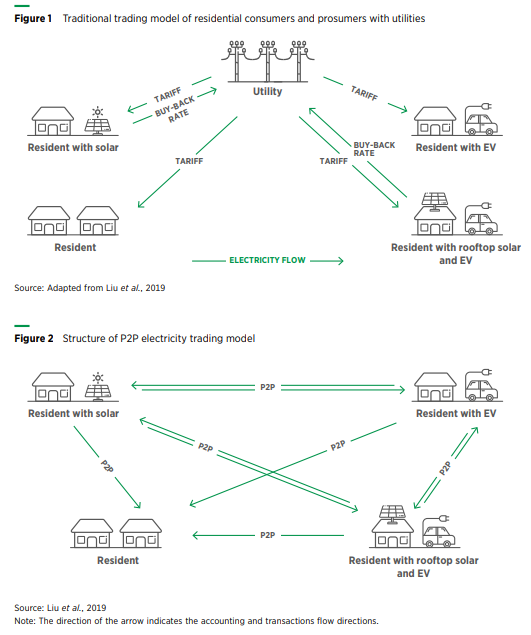 Besides the potential financial benefits for individual consumers and prosumers, the P2P electricity trading model makes renewable energy more accessible, empowers consumers while making better use of their distributed energy resources. It also keeps the community resilient to outages in emergencies, and it can improve the energy access in some cases. 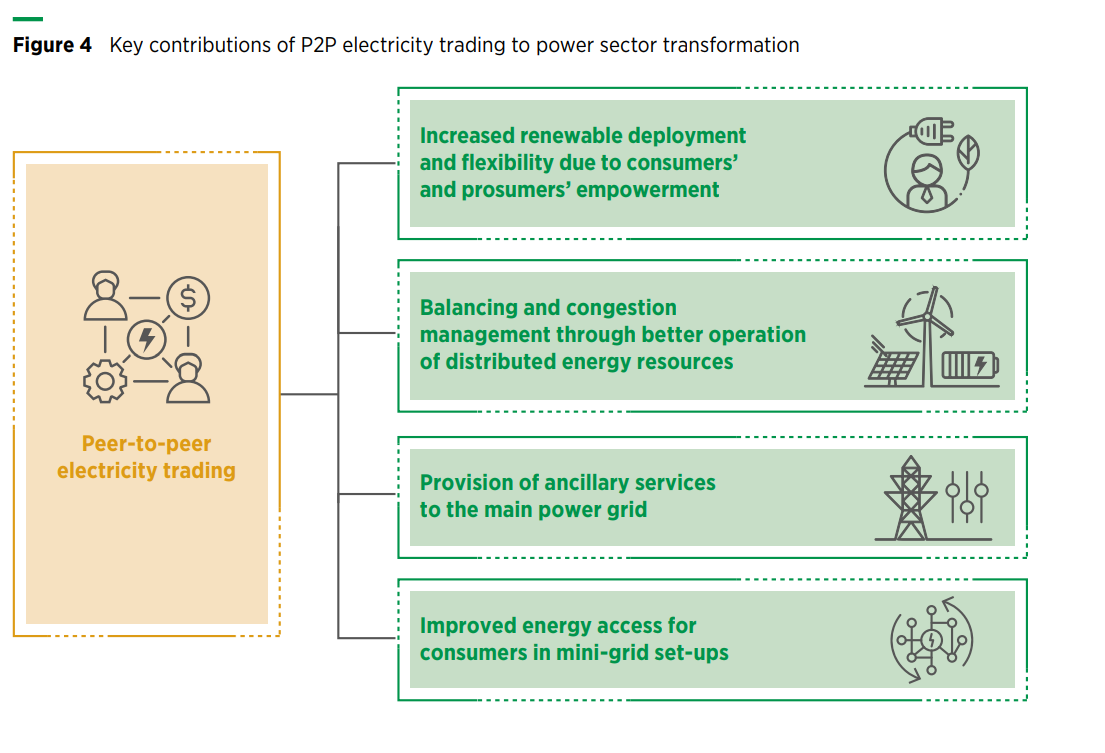 Creating localised electricity markets is about helping the grid as well. P2P trading platforms enable better management of decentralised generators by matching local electricity demand and supply at all times.

Reverse flows of electricity are therefore minimized. Surplus electricity production that is cannot be consumed locally can be stored in a battery and then provide stabilisation services to the grid. Prosumers and consumers will actively adjust their supply and demand to optimize the energy trading.

In a well-functioning P2P electricity trading scheme, it will encourage consumption of electricity at the right time of day from the power system perspective, therefore decreasing the peak load. P2P electricity trading can also help reduce investments related to the generation capacity and grid infrastructure needed to meet peak demand. The distribution system operator can potentially discount on the network charges for the consumers or prosumers that help reduce grid congestion, once they become aware of the system benefits of the P2P trading mechanism, i.e. reducing distribution system congestion and reducing the peak demand.  Moreover, apart from enabling P2P transactions, the P2P platform operator can also enable peers to provide ancillary services to the main grid, as the P2P electricity trading platform can serve as a virtual power plant by coordinating with the decentralised generators to match with the local electricity demand.

The Sustainable Energy Development Authority (SEDA) of Malaysia has conducted and completed a P2P electricity trading pilot project between November 2019 and June 2020. Prosumers can trade electricity with consumers or sell their excess solar photovoltaic electricity to the utility TNB. Exchanges are tracked via a blockchain platform, developed by Power Ledger, an Australian-based company. Findings of the pilot project show that there was an important interest from the solar PV industry including local governments to have P2P electricity trading implemented. The pilot showed that the greatest motivation for prosumers and consumers to take part in this ‘regulatory sandbox’ was the opportunity for energy arbitraging.

For the prosumers, it meant a fast mode of recovering their solar PV investment and for the consumers, it meant an avenue to save on electricity bills. The solar PV industry and local authorities see this as an opportunity to scale up the solar PV rooftop market, while optimizing the rooftop spaces and consumption needs of building assets owned by single entities. With P2P trading available, the amount of electricity sold back to the grid is very small compared to the amount of electricity traded in the community (SEDA, 2019).

During the webinar of August 2020[1], SEDA shared their P2P energy trading pilot project experience under the recently completed ‘regulatory sandbox’. A significant achievement of this pilot project was to resolve the technical integration for P2P implementation from technical assessment to infrastructure readiness.

Figure 3: Key challenges and mitigation to address the various technical areas include:

An important finding from the Malaysian pilot run is the role of the retailers in the P2P electricity trading. The retailer provided integrated services which incorporated the P2P billing into their regular billing. In this regard, counterparty risks arising from consumers not paying the prosumers for the solar electricity traded was minimised through the integrated billing mechanism. Additionally, for live deployment, the retailer was also be the buyer-of-last-resort for untraded solar electricity from the prosumers.

Nevertheless, SEDA acknowledges there are gaps that deserve further studies before the P2P can be implemented. Gaps such as impact of the P2P energy trading on the grid, identifying sustainable business models for P2P, capital investment and legal provision for live implementation, among others. Further, a conducive regulatory framework to reap all the benefits of P2P electricity trading is needed. Regulators would need to ensure a level playing field for platform-based businesses vis-à-vis traditional utilities and retailers. In the same time the regulations should support and promote the innovations in the electricity market.

In addition to the physical layer of P2P electricity trading for which a network is needed (e.g., renewable minigrids, micro-grids, distribution network capacity, etc.), another layer that is needed refers to a virtual, digital layer. P2P trading is facilitated by digital platforms where a large number of peers can interact. Data from both producers and consumers need to be collected and analysed to check the reliability of the power system. Smart meters, broadband communication infrastructure, network remote control and automation systems (network digitalisation) are thus fundamental enablers of P2P electricity trading model.

The P2P trading platform can work efficiently with the help of blockchain technology. Blockading can facilitate trading, being a reliable source of truth where consumers could trust the measurements of power electricity sold and the amount of which should be paid. Blockchain technology could reduce the transaction costs for electricity trading, ensuring instant settlements with no intermediary. Another benefit is given by the functionality of smart contracts, which can optimise and expedite the interaction of actors on the platform and facilitate the trading and financial settlements with the help of determined trading algorithms.

For example, the P2P blockchain developer LO3 Energy operates the Brooklyn Microgrid (USA), which augments the traditional energy grid letting participants tap into community resources to generate, store, consume (i.e., buy and sell) energy at the local distribution level. Another example of P2P trading using blockchain technology is the Power Ledger platform in Australia, which records the generation and consumption of all peers in real time. The P2P project piloted in Malaysia is built on the Power Ledger platform, which is also running trials in Australia, China, India, France, Japan, Thailand,  and the United States (US) (Ledger Insights, 2019).

P2P electricity trading pilots show that, if innovation in technology is accompanied by innovation in business models, regulation and system operation, distributed energy resources can provide cost-effective support to renewable-based power systems, bringing benefits to all consumers, prosumers and the entire power system. IRENA’s report “Innovation Landscape for a renewable powered future” identifies 30 key innovations that can reduce the cost of integrating large shares of renewables in today’s power systems, with P2P trading being among them (IRENA, 2019).

[1] Recordings of the webinar can be found here: https://www.irena.org/events/2020/Aug/IRENA-SEDA-Joint-Webinar

DERs as a new dimension to “Affordable” Housing

The Emergence of Hydrogen in the Distributed Energy Resources Marketplace