The Bataan Nuclear Power Plant in the Philippines: A Nuclear Plant, and a Dream, Fizzles In many ways, the Philippines is a good case study of the effect of public perception and response to the establishment of a nuclear power program. The country’s first and only attempt at nuclear power development was the 621-MW Philippine Nuclear Power Plant in August 1977. It was supposed to be the first of two nuclear plants to be built in the northern province of Bataan. It was also the first nuclear power plant in Southeast Asia, and deemed as a promising solution to the 1973 oil crisis that had adversely affected the global economy, including the Philippines. 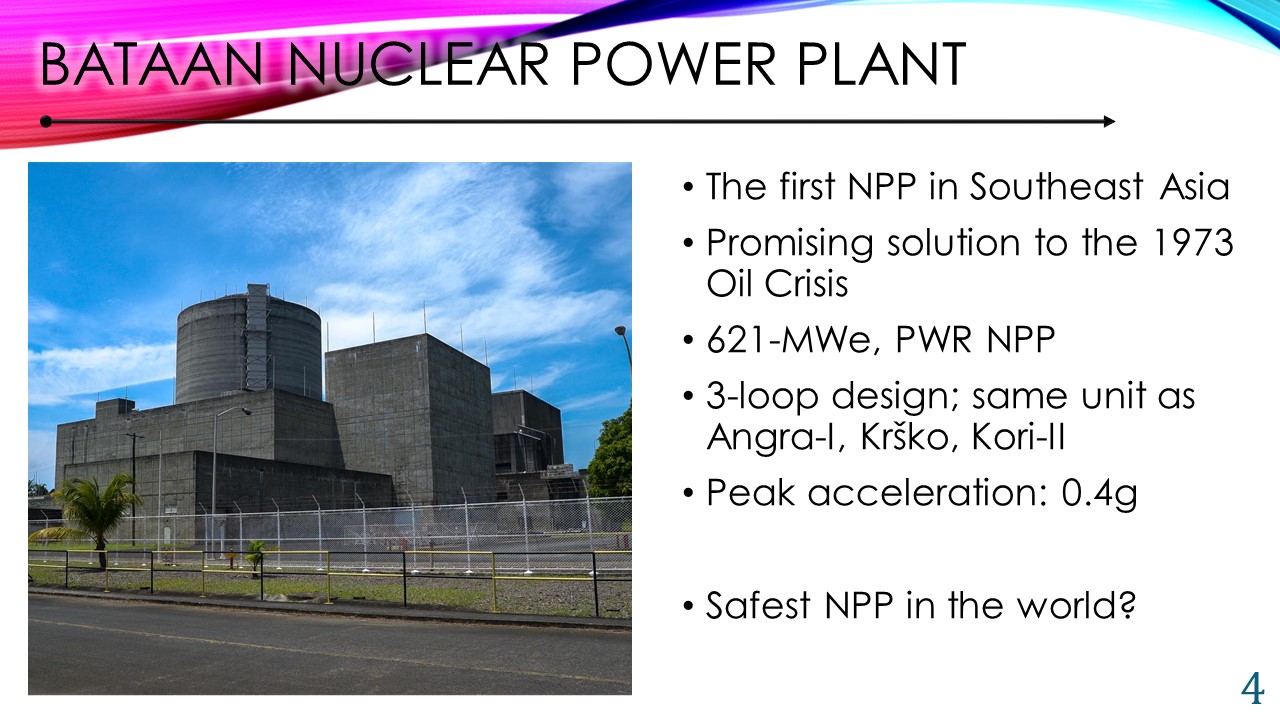 Unexpectedly, the Chernobyl accident happened turning optimism quickly into skepticism. This was followed by political events rapidly unfolding in the Philippines and the 21-year rule of President Marcos, crumbled in the face of the People Power revolution that catapulted Mrs. Corazon Aquino to the presidency. Almost everything associated with Marcos was rejected, invariably including the completed and fully constructed and equipped Bataan Nuclear Power Plant (BNPP). Thus, 1986 saw the first nuclear power plant in the Philippines and in Southeast Asia mothballed, because of an unfortunate association with an unlamented regime overthrown by the people. From thereon, the power plant was placed on ‘preservation mode’. But then, clamor for the reopening of BNPP was revived during the power crisis in the 90s and the skyrocketing of oil prices in 2007.

During these periods, the Department of Energy (DOE) actually came close to reconsidering nuclear power as a potential energy source for the country. An Inter-Agency Core Group on Nuclear Energy composed of the Department of Energy, the Department of Science and Technology and the NPC Power was organized to do the evaluation. But then the Fukushima nuclear plant incident happened in 2011, creating global panic and concerns about the safety and integrity of nuclear plants. Meanwhile, in the Philippines, the incident virtually led to an undeclared moratorium on all plans to go nuclear for power generation. If these weren't enough, adding to these various setbacks, the emergence of natural gas, wind and solar energy pushed nuclear power deeper into dormancy.

As public perception of nuclear technology has been tainted as a result of few but sensational incidents, Government has a clear role in regaining public trust. Government plays a key role in ensuring public participation and involvement which is critical at every stage of a nuclear power program. This case study takes into account the failure of public involvement and acceptance towards BNPP as it faced allegations of corruption and anomaly. Moreover, two surveys conducted by the Inter-Agency Core Group regarding nuclear energy utilization and awareness were analyzed.

Controversy and Timeline of Construction 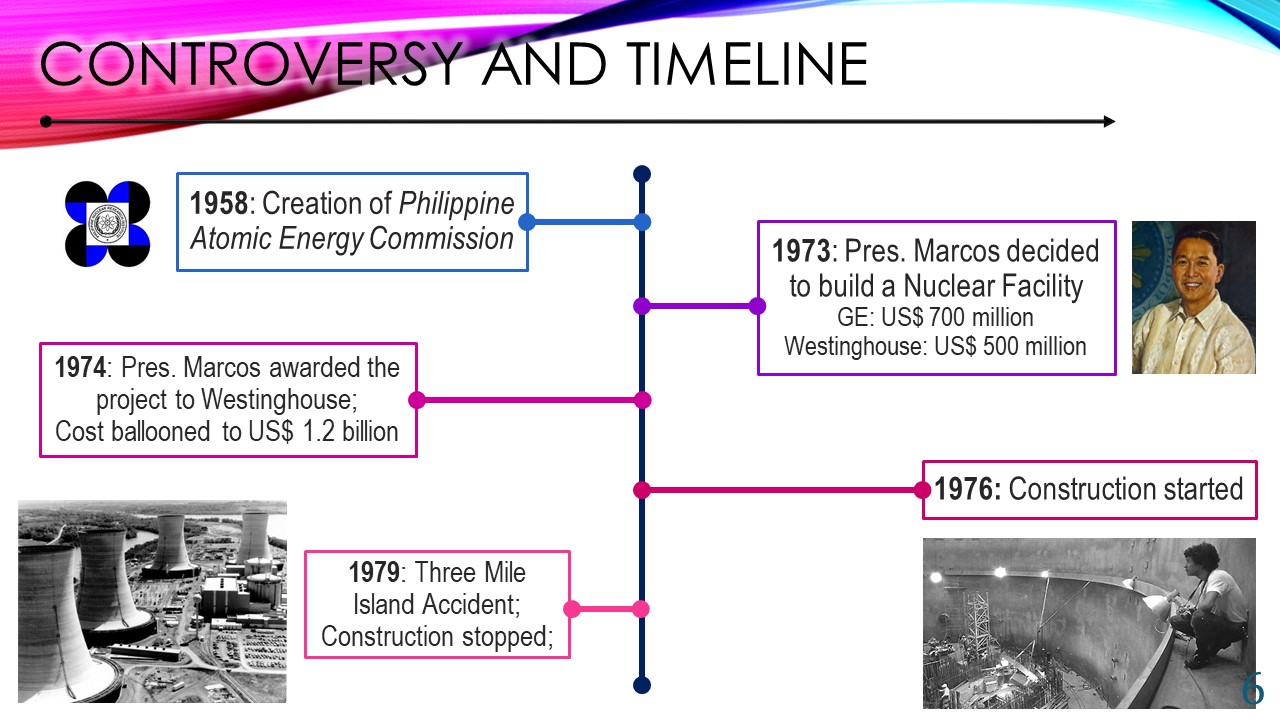 The presidential committee tasked to oversee the project preferred General Electric's proposal, but this was overruled by Marcos in June 1974 who signed a letter of intent awarding the project to Westinghouse, despite the absence of any specifications on their proposal. By March 1975, Westinghouse's cost estimate ballooned to US$1.2 billion without much explanation. The National Power Corporation would later construct only one nuclear reactor plant for US$1.1 billion. It would soon be discovered that Westinghouse sold the similar technology to other countries for only a fraction of the project cost it billed the Philippines.

Construction on the Bataan Nuclear Power Plant began in 1976. Following the 1979 Three Mile Island accident in the United States, construction on the BNPP was stopped, and a subsequent safety inquiry into the plant revealed over 4,000 defects. Among the issues raised was that it was built near a major geological fault line and close to the then dormant Mount Pinatubo. 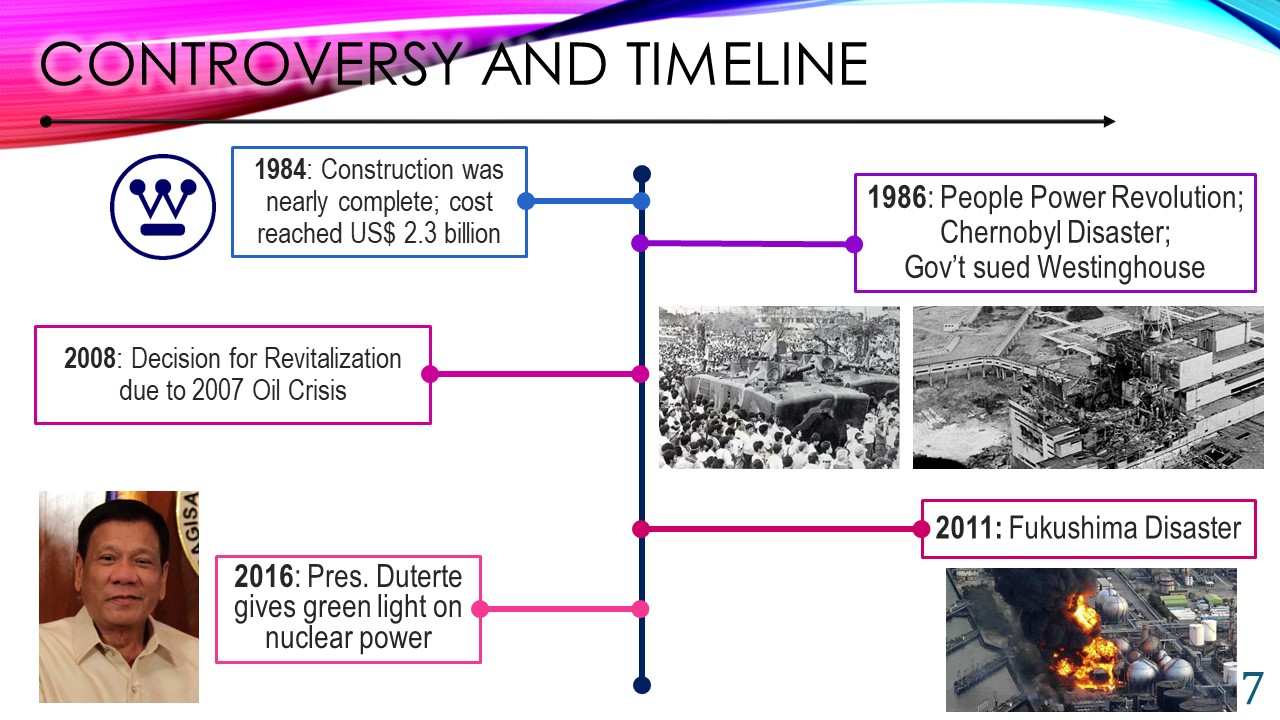 By 1984, when the BNPP was nearly complete, its cost had reached $US2.3 billion. Equipped with a Westinghouse light water reactor, it was designed to produce 621 megawatts of electricity. President Ferdinand Marcos was overthrown by the People Power Revolution in 1986. Days after the April 1986 Chernobyl disaster, the succeeding administration of President Corazon Aquino decided not to operate the plant. Among other considerations taken were the strong position from Bataan residents and Philippine citizens as well as concern over the integrity of the construction.

The government sued Westinghouse for alleged overpricing and bribery but was ultimately rejected by a United States court. Debt repayment on the plant became the country's biggest single obligation. While successive governments have looked at several proposals to convert the plant into an oil, coal, or gas-fired power station, these options have all been deemed less economically attractive in the long term than simply constructing new power stations.

Anti-Nuclear Movement in the Philippines 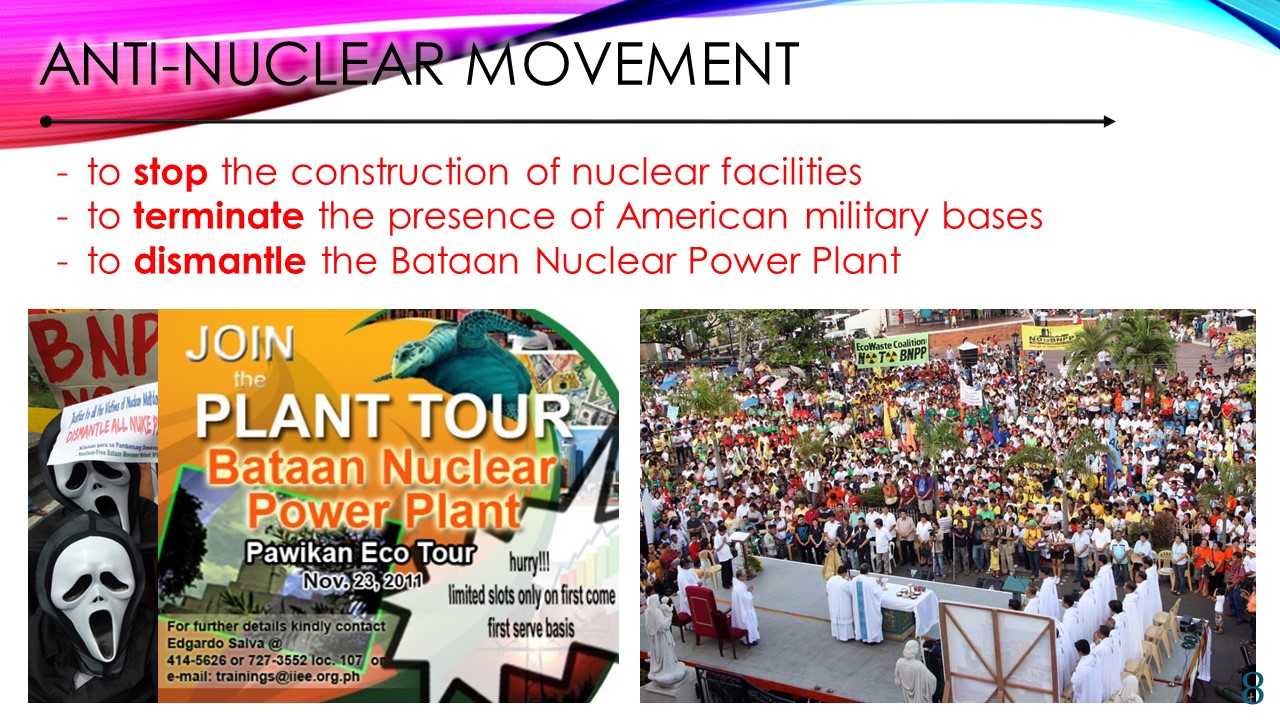 The anti-nuclear movement in the Philippines aimed to stop the construction of nuclear power facilities and terminate the presence of American military bases, which were believed to house nuclear weapons on Philippine soil. Anti-nuclear demonstrations were led by groups such as the Nuclear-Free Philippines Coalition and No Nukes Philippines. A focal point for protests in the late 1970s and 1980s was the proposed Bataan Nuclear Power Plant, which was built but never operated. The project was criticized for being a potential threat to public health, especially since the plant was located in an earthquake zone.

The demand of the anti-nuclear movement for the removal of military bases culminated in a 1991 Philippine Senate decision to stop extending the tenure of US facilities in the Philippines. Tons of toxic wastes were left behind after the US withdrawal and anti-nuclear and other groups worked to provide assistance for the bases' cleanup. 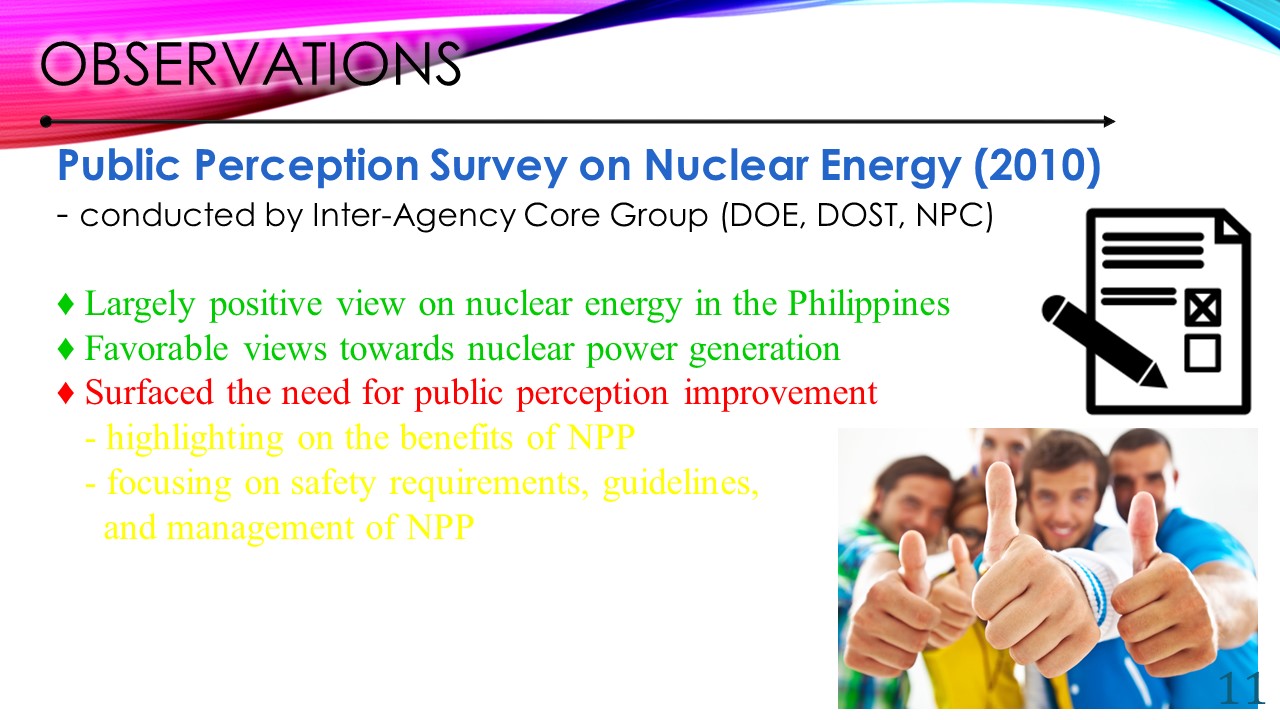 In 2010, the Inter-Agency Core Group, led by the Philippine Department of Energy, the Department of Science and Technology, and the National Power Corporation, conducted a public perception survey to gauge the public’s appreciation of, as well as apprehensions towards, nuclear energy. This was part of an overall information and education campaign mandated by the Philippine Energy Plan 2009-2030. 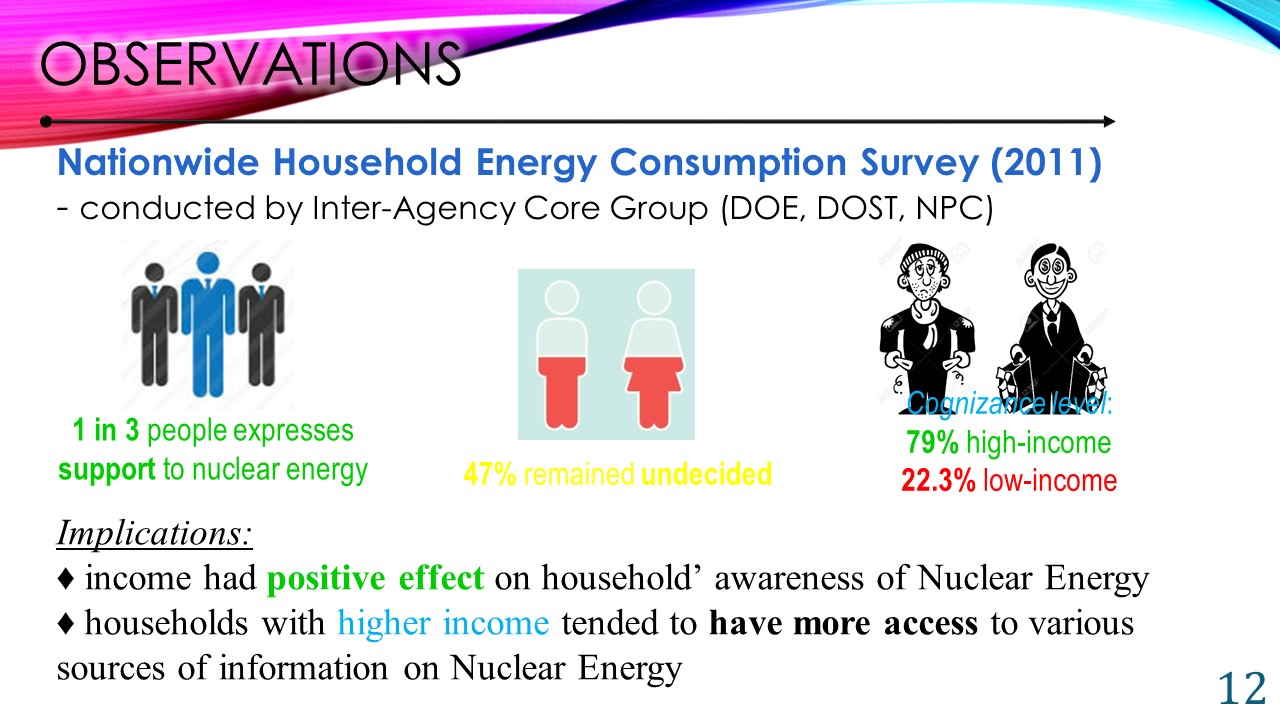 In 2011, the nationwide Household Energy Consumption Survey, for the first time, included questions related to nuclear power. The survey aimed at determining awareness and perception of households on major energy issues, including nuclear energy, surfaced the following:

But before any further plans of the Core Group could come to fruition, the Fukushima incident in 2011 again turned receptivity into skepticism. The incident was a game changer – creating widespread concern about nuclear power plants, and invariably leading to their undeclared moratorium in the Philippines. The political issues associated with the Bataan nuclear power plant, the external catastrophes involving nuclear power plants in other countries, juxtaposed against the availability of cheaper sources of energy, such as natural gas, and the generally favorable reputation of other forms of renewable energy for power generation, consequently put nuclear power in the back burner. 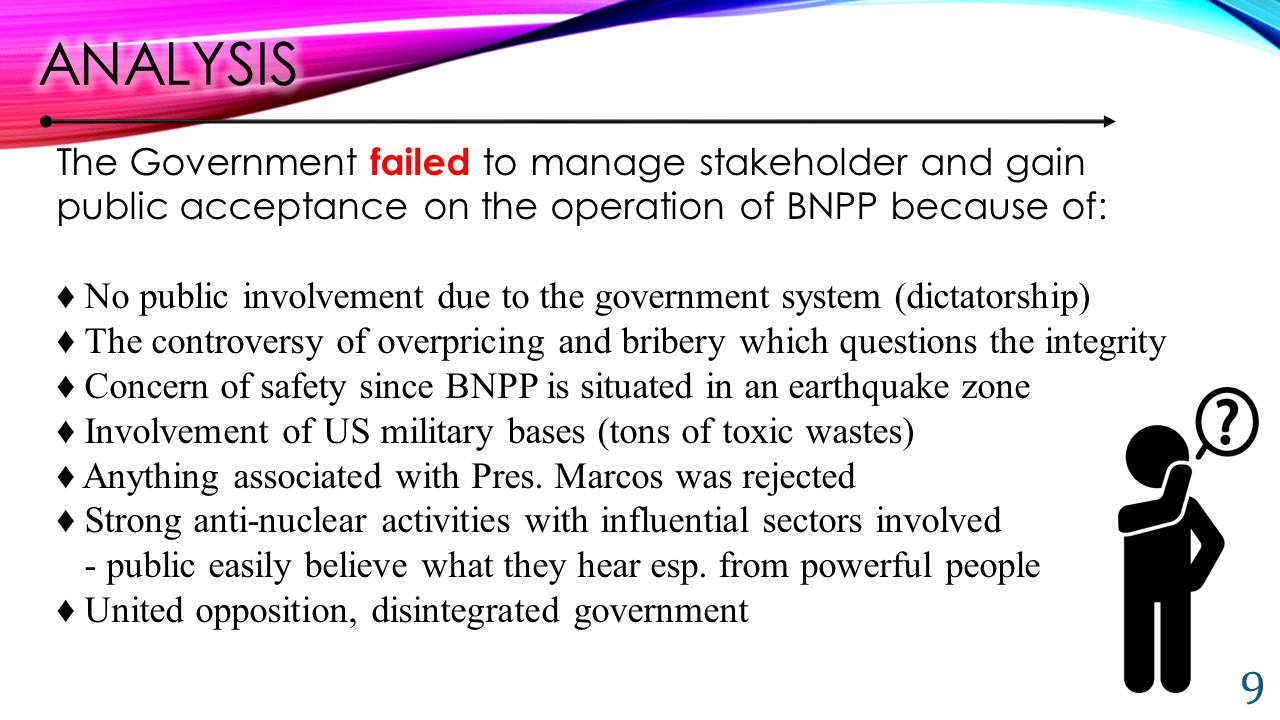 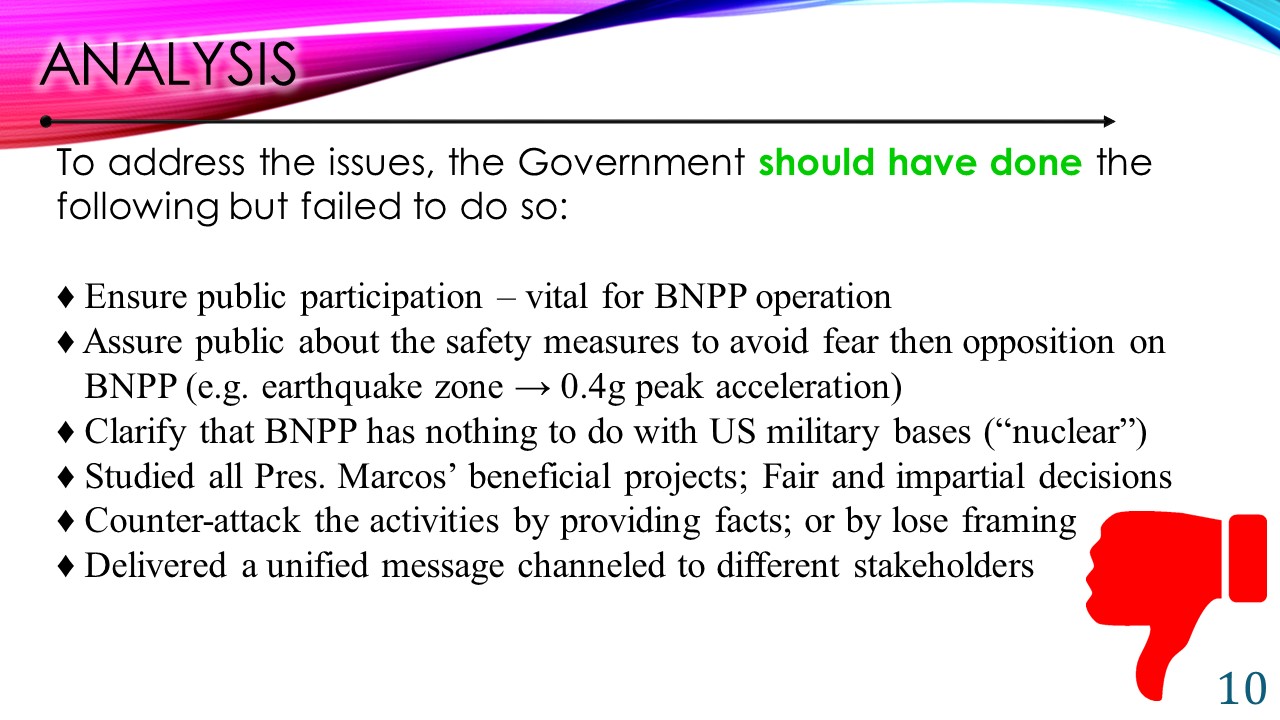 Public perception of nuclear technology has been tainted as a result of few but sensational incidents. These have not only eroded trust in the technology, but also in the ability to balance the need for safety and the need for an economically viable operation of nuclear power plants. Once nuclear power plant lose the trust, it is difficult to regain the confidence. The public contemn government corruptions and are terrified at nuclear incidents. Chernobyl and Fukushima incidents erased utilization of nuclear technology energy from people in the Philippines. Even the public perception survey and household energy consumption survey indicated that there was a largely positive view with regard to the use of nuclear energy, the BNPP being unsafe sat close to inactive volcano Mt. Natib has been causing an incredibly serious problem which people mistrust nuclear technology.

With a view to re-establishing public relations, NPP stakeholders and government has to evaluate BNPP and inform the public of the results. Fukushima was designed for a seismic acceleration of 0.18g, while the Bataan plant had a higher threshold of 0.4g. On the basis of these technical information, NPP stakeholders have to build relationship and two-way communication channel to improve public perception and awareness. 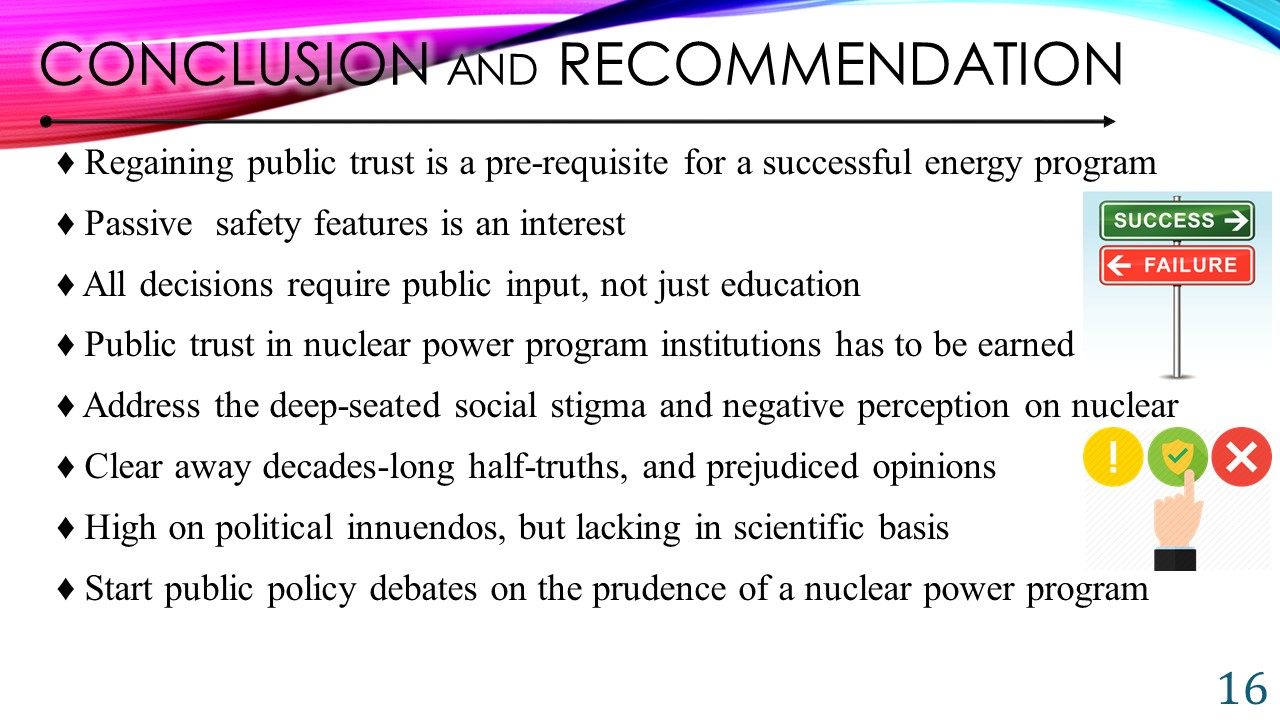 Regaining pubic trust is a prerequisite for a successful energy program and it involves two major aspects. On the one hand, educating the stakeholders, whether the general public, NGOs or other involved parties, not just on the benefits of nuclear technologies, but also in the many ways that technology has progressed. From the vast improvements in safety mechanisms to what the latest generations of reactor types can bring to the table. Both in terms of safety and in terms of efficiency of operations, there is much to talk about. Given the complexities of increasing grid capacities in countries like the Philippines – consisting of about 7.700 islands – small modular reactors may be special interest. As a country that is afflicted by earthquakes at regular intervals, new passive safety features are definitely of interest as well. But it also the trust in the state that needs to be affirmed. All decisions, from the initial stages through siting, safety and environmental issues, require public input, not just education. The trust of the public in the institutions tasked with establishing a nuclear power program has to be earned.

This case study of the Philippine's unsuccessful communication and public acceptance in the nuclear power industry, has been conducted in partial fulfillment of the requirements of the course EA201 Stakeholder Management and Public Acceptance.

Regaining pubic trust is a prerequisite for a successful energy program and it involves two major aspects. On the one hand, educating the stakeholders, whether the general public, NGOs or other involved parties, not just on the benefits of nuclear technologies, but also in the many ways that technology has progressed.

This seems to be a universal need when it comes to nuclear projects-- do any countries/regions come to mind as having been particularly successful in this regard? What are some best practices that might be learned from those successes (if they exist)?

This is an excellent example of what has happened with nuclear.  The public is, on the one hand, often too fickle to make informed decisions which require the long term commitment that nuclear requires. On the other hand, cost escalations and nuclear disasters undermine any chance of achieving long term public trust. The "shifting sands" of successive authoritarian governments exacerbate the situation.

Is France the only exception? But, even there faith in nuclear is waning.