Penny stocks are often seen as opportunities for huge returns. However, this happens on rare occasions with the rest of the time investors losing money. There could be an opportunity in small oil companies now given the recent events and surging oil prices. Here I will try to assess whether it is quite the time to go all-in on small oil companies.

Why oil prices are on a bull-run

The price of light crude oil has made massive gains over the last four weeks to hit a new 8-month high of $45.90. This coincided with, first, the US election vote that resulted in a Biden win, and secondly, and the most significant, the announcement of several COVID-19 vaccines that have demonstrated high efficacy rates in clinical trials.

In general, oil prices have bounced back after a sustained period of decline. This could be significant in several aspects of the oil and gas market. 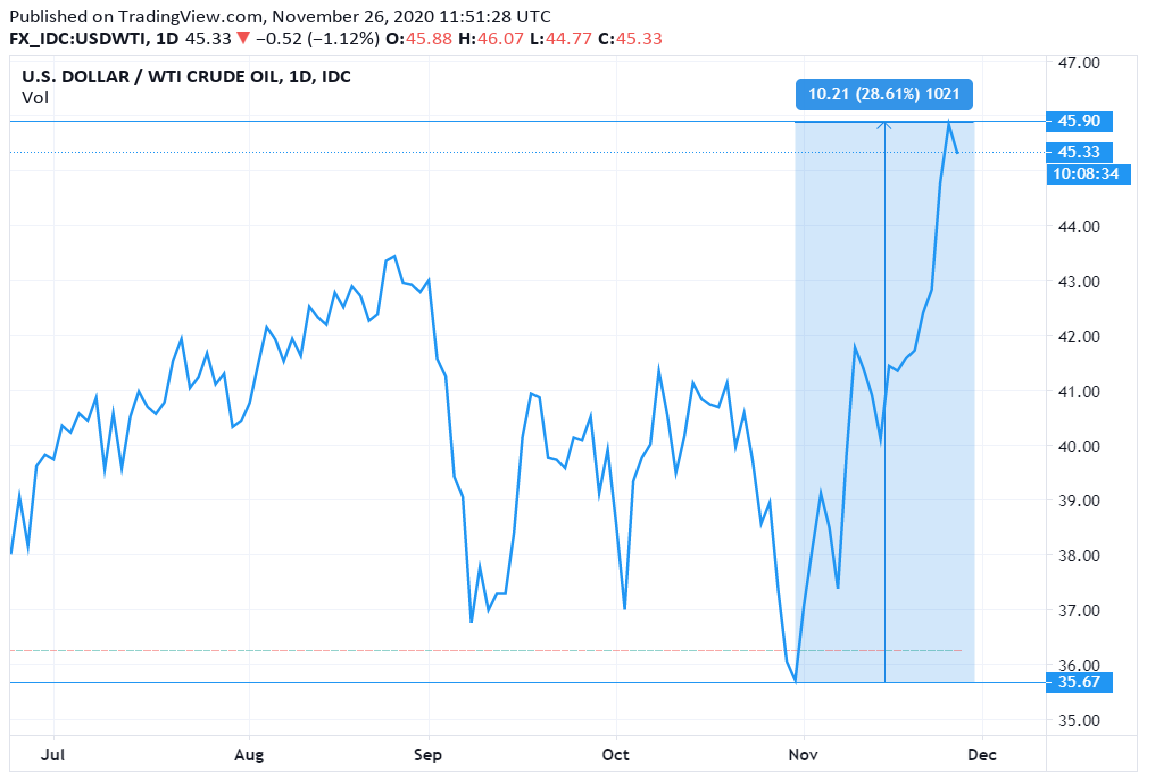 The impact on oil companies

To begin, several oil and gas companies suffered the wrath of the pandemic. Even the biggest players in the market led by the likes of Royal Dutch Shell (RDS.A) and BP Plc (BP) witnessed significant drops in market value.

The Netherlands-based Royal Dutch Shell has lost 40% of its market value since the start of the year. Before the recent resurgence in oil prices, Shell’s market value had plummeted by more than 62%. On the other hand, the UK’s BP, which is now down 44% this year, had plunged by more than 60%.

This picture can be replicated across several oil and gas companies including smaller ones that do not enjoy the luxury of a massively diversified portfolio and huge streams of cash flows like the two industry giants. In fact, some that had market values of more than $100 million plunged to the category of penny stocks after their prices dropped below the $1.00 level. This can cause shareholder anxiety leading to a mass sell-off.

The impact on oil and gas penny stocks

A good example, in this case, would be Texas-based Ring Energy (REI), which in January was valued at more than $200 million when its stock traded at $3.30 per share. At the current price of $0.70, it is now a penny stock valued at $57 million after losing more than 78% of its market value. Canada’s TransGlobe Energy Corp (TGA) is another penny stock, whose market value has dropped to $37 million from well over $100 million in January.

TransGlobe and Ring Energy may have lost a significant chunk of their market values but as oil prices recover, so will they. And because they are penny stocks, the general impact of the recovery could be huge. Momentum investors specialize in trends and currently, oil prices are rising.

TransGlobe is already up more than 40% since the start of the month, while Ring Energy has gained 50%. This creates a potential opportunity for investors looking to capitalize on the recovery of oil prices. However, trading penny stocks can be tricky, even when markets appear to be stable. Furthermore, it is difficult to tell how long the current bull-run in oil prices will last amid the coronavirus pandemic.

Most penny stock investors look to the markets for investment opportunities while very few look at private startups. As such, while it is important to look at the industry with a long-term view, we cannot ignore the dynamics of oil prices and the short-term impact they can have on oil and gas penny stocks.

The quicker the Covid vaccines are rolled out the better

So far, oil prices seem to be riding on the positive wave created by Pfizer and Moderna’s announcement of COVID-19 vaccines. AstraZeneca and Oxford university’s announcement of positive progress is already being questioned after the pharmaceuticals company admitted to a manufacturing error. China’s Sinopharm and Russia’s ‘Sputnik V’ covid vaccines have added to the market optimism.

Some have indicated that their vaccines could be ready for shipping soon after approval by the relevant drug administration authorities. However, health experts still warn that it could take as long as 12 months for the vaccines to reach some regions of the world. The sooner the better. As such, the current bull-run faces potential bottlenecks, which could send oil prices plunging again. This is not helped by the fact that coronavirus cases continue to rise.

The long-term future for the oil and gas market still looks promising. However, the short-term volatility caused by the uncertainty of oil price movements will be a concern for oil companies. The big companies may live through this volatility without much struggle due to the flexibility provided by their substantial cash flows.

On the other hand, for the smaller players, this could be the time to downsize on capital expenditure. This could have a positive impact in two ways. First, improved net incomes, and secondly, higher oil prices for the industry because low capital spending results in low production output.