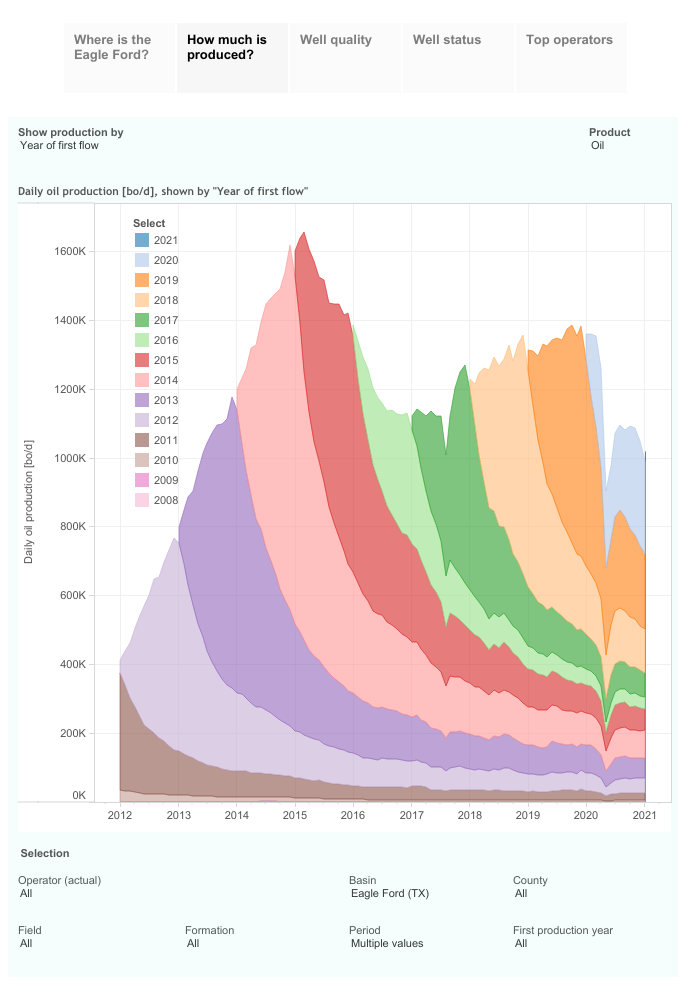 This interactive presentation contains the latest oil & gas production data from all 25,474 horizontal wells in the Eagle Ford region, that have started producing from 2008 onward, through January.

Tight oil production in the Eagle Ford was flat m-o-m in January, at about 1.05 million bo/d (after upcoming revisions). Compared with a year earlier, output was down by 300 thousand barrels of oil.

The rig count has steadily increased in the past couple of months, and as of last week 37 rigs have been drilling horizontal wells here (source: Baker Hughes).

According to our supply projection model, this still isn’t sufficient to maintain tight oil output in the basin, but it should already be able to sustain natural gas production at just over 5 Bcf/d: 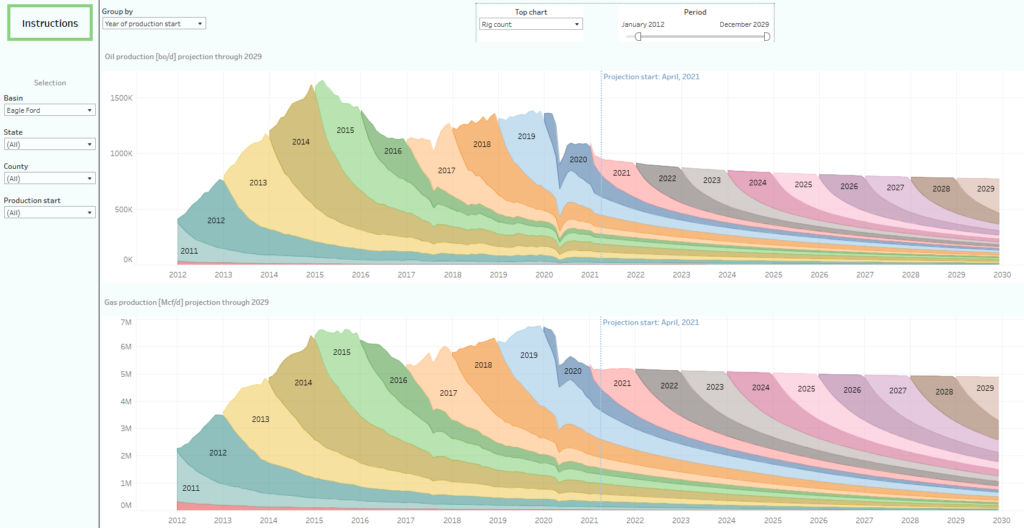 Tight oil & gas outlook in the Eagle Ford, based on 37 horizontal rigs and current productivity

These images were taken from our Supply Projection dashboard, by selecting this basin and showing the results for both oil & gas.

About 63% of the wells are now below 25 b/d (see the bottom chart in the 3rd tab), although this number also includes the gas wells in this area. In our post last week on North Dakota, we saw that this metric was just over 40% there.

The output and location of the 10 largest operators in the basin are displayed in the final tab.

How did well productivity change for the top 4 of these operators (EOG, Chesapeake, ConocoPhillips & Marathon)?

In the above screenshot from our Productivity Over Time dashboard, you can see the well locations of these 4 operators in the core of the Eagle Ford. I’ve only selected the oil wells that began producing since 2012. In the top-right chart, their average well performance is visualized, based on the average cumulative oil recovered in the first 18 months, by production start year. During these first 18 months, typically just over half of the EUR is recovered in this area.

ConocoPhillips has consistently outperformed the others on this metric. For example, the 153 horizontal oil wells that it brought online in these counties in 2018 recovered on average 220 thousand barrels of oil in the first 18 months. EOG’s performance has been sliding since 2017 and was in 2019 (the last year available due to the metric chosen) below the others.

The bottom chart displays the trends in lateral length & proppant loadings for these 4 operators. Chesapeake has the longest laterals, while ConocoPhillips used the most proppants in recent years.

Later this week we will have a new post on the Haynesville, followed by one on Pennsylvania early next week, which just released February production data (already available in our subscription services).

Visit our blog to read the full post and use the interactive dashboards to gain more insight: https://bit.ly/3arH1tp