IEA: Natural Gas Wil Be Key in Both the Short- and Long-Term

Natural gas will continue to play an important role globally as countries recover from the economic strain caused by the COVID-19 pandemic, according to two recent International Energy Agency reports.

The IEA reports provide clear insight on the future of natural gas both in the near-term and longer projections. The World Energy Outlook (WEO) has been the agency’s flagship global energy publication for decades, providing a comprehensive, long-term outlook on what’s to come in all-energy affairs.

WEO’s 2020 edition adds to its traditional scenarios by factoring the impacts of COVID-19 into both the demand and supply sides of the energy market.

Despite climate activists and fringe “Keep It In the Ground” groups extrapolating the economic challenges facing the fossil fuel industry this year, the WEO recognizes that oil and natural gas demand is not going anywhere anytime soon.

IEA predicts that the ongoing pandemic will continue to influence oil demand growth, and the as-yet-unknown duration of the economic recovery is a key cause of uncertainty for predicting the outlook on oil markets. According to IEA, while an increase in the population working from home and a decrease in air travel have reduced oil demand, this is offset in the short-term by more people using personal transportation, including a high number of less-fuel efficient and older vehicles.

“[W]ithout a large shift in government policies, there is no sign of a rapid decline. Based on today’s policy settings, a global economic rebound would soon push oil demand back to pre-crisis levels.” (emphasis added)

Emerging markets that will need oil for transportation are one factor that could drive continued growth:

Further, increased demand in the petrochemical sector will play a role in oil demand growth:

“Upward pressure on oil demand increasingly depends on its rising use as a feedstock in the petrochemical sector. Despite an anticipated rise in recycling rates, there is still plenty of scope [of] demand for plastics to rise, especially in developing economies.”

As a result of this and other factors, IEA forecasts oil demand will continue to grow for at least the next decade.

Over the past year, the WEO reports, global natural gas demand has decreased by 3 percent, but its future will vary by market depending on regional energy policies.

IEA reports that global demand will rebound from 2020 and continue to rise for the next decade. Due to a focus on improving air quality while expanding energy infrastructure, IEA predicts that this dramatic increase in natural gas demand will be concentrated in South and East Asia. 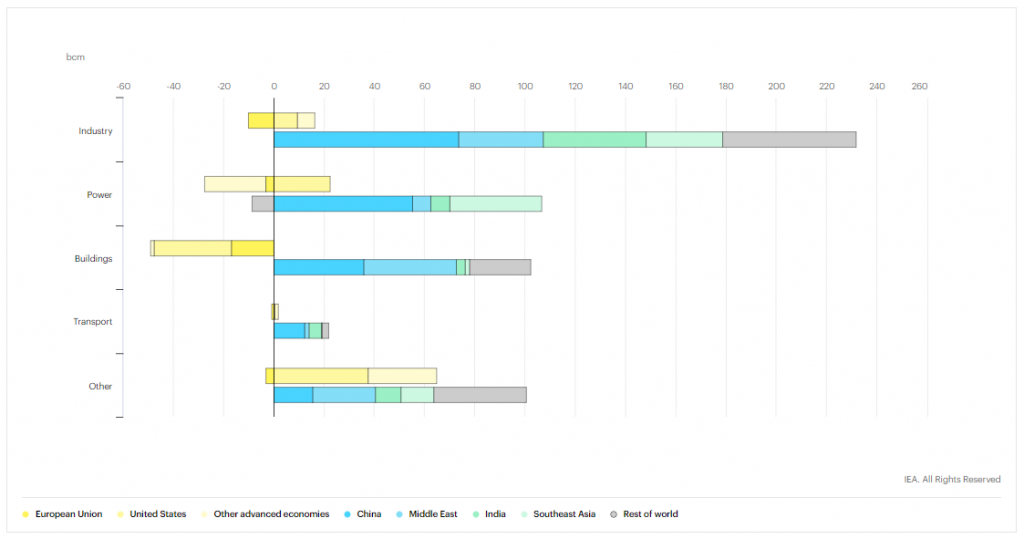 On the contrary, in the WEO, IEA predicts a decrease in natural gas demand in regions with more advanced economies and ambitious policies to reduce greenhouse gas emissions to zero, such as Europe and the United States.

Despite the pandemic-related fall in natural gas demand this year, IEA’s Global Gas Security Review noted that global LNG trade expanded by 3 percent in the first nine months of 2020. This trend, even with significant natural gas stocks worldwide, can be attributed to the additional liquefaction capacity from suppliers as well as a positive response from buyers on the demand side.

However, and most importantly, LNG export growth has been driven by the United States, with a 38-percent export increase within the first nine months of 2020. In fact, and despite the U.S. LNG market experiencing significant adjustments due to lower demand, the IEA’s Global Gas Security Review underscored “the outsized role of U.S. LNG in market balancing at a time of historic oversupply”.

This is explained by more U.S. natural gas prices, the result of abundant shale plays across the country, providing additional flexibility compared to other natural gas regional markets.

Simply put, if the U.S. LNG market hadn’t taken one for the team, demonstrating its resilience, the demand shock “could potentially have had a damaging effect on the commercial and contractual structures underpinning global gas trade.”

“[T]he financial health of many utilities, especially in developing economies, has worsened as a result of the crisis. There is a disparity in many countries between the spending required for smart, digital and flexible electricity networks and the revenues available to grid operators, creating a risk to the adequacy of investment under today’s regulatory structures.”

Countries including the Unites States, Germany and China have experienced significant capital reductions to modernize their electricity grids and integrate incoming renewable-sourced power: 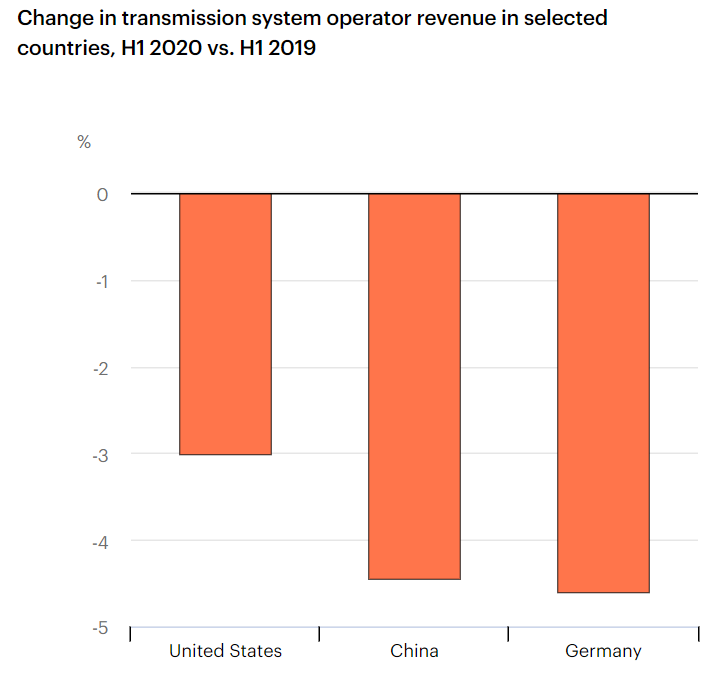 U.S. natural gas will certainly contribute in alleviating such imbalance by serving as renewables’ top partner by stabilizing electricity grids and continue providing reliable, affordable electricity across all markets.

The IEA argues that energy poverty has increased significantly as a result of Covid-19. Past reports noted that since 2000, 1.2 billion people have gained access to electricity worldwide, with natural gas fueling 26 percent of that added generation. However, WEO 2020 data suggest the progress made in guaranteeing energy access, particularly to vulnerable communities, has been reversed due to Covid-19:

“We estimate that a rise in poverty levels worldwide in 2020 may have made basic electricity services unaffordable for more than 100 million people who already had electricity connections, pushing these households back to relying on more polluting and inefficient sources of energy.”

In the case of the United States, natural gas has played a significant role in abating energy poverty, a pressing issue for vulnerable and rural communities across the country. Natural gas abundance has lowered power-generation costs since the Shale Revolution began, with the resource now providing more than a third of the electricity generation matrix.

As a result, consumers have also benefitted. According to the U.S. Chamber of Commerce’s Global Energy Institute, annual electricity prices declined consecutively in 2015 and 2016 as a result of natural gas’ increased market share. Low electricity prices are more evident in regions closer or better connected to gas-abundant areas.

The post IEA: Natural Gas Wil Be Key in Both the Short- and Long-Term appeared first on EnergyInDepth.