Energy prices, including of base commodities like natural gas, crude oil and coal are climbing around the world – especially in the last 3 months, amid a perfect storm of extreme weather, rising power demand, and supply constraints.

This is upending global markets, with China and India facing electricity crises while a dozen power and fertilizer companies in Europe and the UK have either suspended operations in some plants, or are looking at going belly-up in the face of sky rocketing gas prices.

Several factors are fuelling this price surge in energy commodities – primary among them is energy demand having rebounded as economies get back to business and consumers return to pre-pandemic levels of economic activity. At the same time, producers, who suffered through 2020′s unprecedented downturn, have been slow to hike output.

Citigroup forecasts a winter price shock that could see natural gas prices in Europe average over $30/ MMBTU in the fourth quarter and over $32 in Asia. But Citi energy analysts also say if there is a very cold winter that could spike as high as $100 MMBTU, the equivalent of about a $580 barrel of oil

Crude: Oil prices extended Friday’s rally into Monday, with the U.S. benchmark topping $81 and trading just shy of $82 a barrel as Europe and Asia continue to struggle to secure energy supply for the winter. Crude prices seem to have held steady above the $80 per barrel mark, despite growing calls from US officials on OPEC+ to increase production so as to ease the ongoing appreciation of transportation fuels. The supply restraint of the oil group has been largely offset by the Chinese power crunch and production mandates for refiners across the country.

Coal: Coal prices in China have hit record highs amid flooding in northern China that forced the closure of dozens of coal mines. Coal remains the main source of energy in China, used for heating, power generation and steelmaking. China is now grappling with power shortages, prompting the government to ration electricity during peak hours and some countries to suspend production.

Coal futures have thus risen nearly two and a half times since the start of this year, to a 13-year high and physical thermal coal prices were at record highs as rallying gas prices and strong Asian demand fuelled coal buying.

The price increases are expected to result in sharp upward pressure on household energy bills and also present broader risks to global economic activity - especially for core sectors that are directly exposed to the price rises.

These are eye-opening trends. Rajat-- what do you think is the end game, here? Are we just going to have to ride out these prices until hopefully they come back to Earth, or is this the beginning of a more fundamental shift?

Matt, i think in the near term atleast, given what we're hearing about coal shortages and a harsh winter, commodities prices will retain their current highs.. with perhaps a slight rationalisation of gas prices in Europe as Mr. Putin turns benign and loosens his taps. But for the larger part, this quarter, and perhaps even spilling over into early 2022 will be marked by (much) higher than average energy prices

Crazy stuff to say the least. By my math the U.S. is factoring in a 5% premium for the chance of a 1 in 20 winter. My question continues to be, when will the US realize our storage and S/D are adequate and prices should be at/under $4.

Chris, storage is not just a US problem, but Europe too has recorded decade low inventory levels (see attached graph for a note i had written last month) 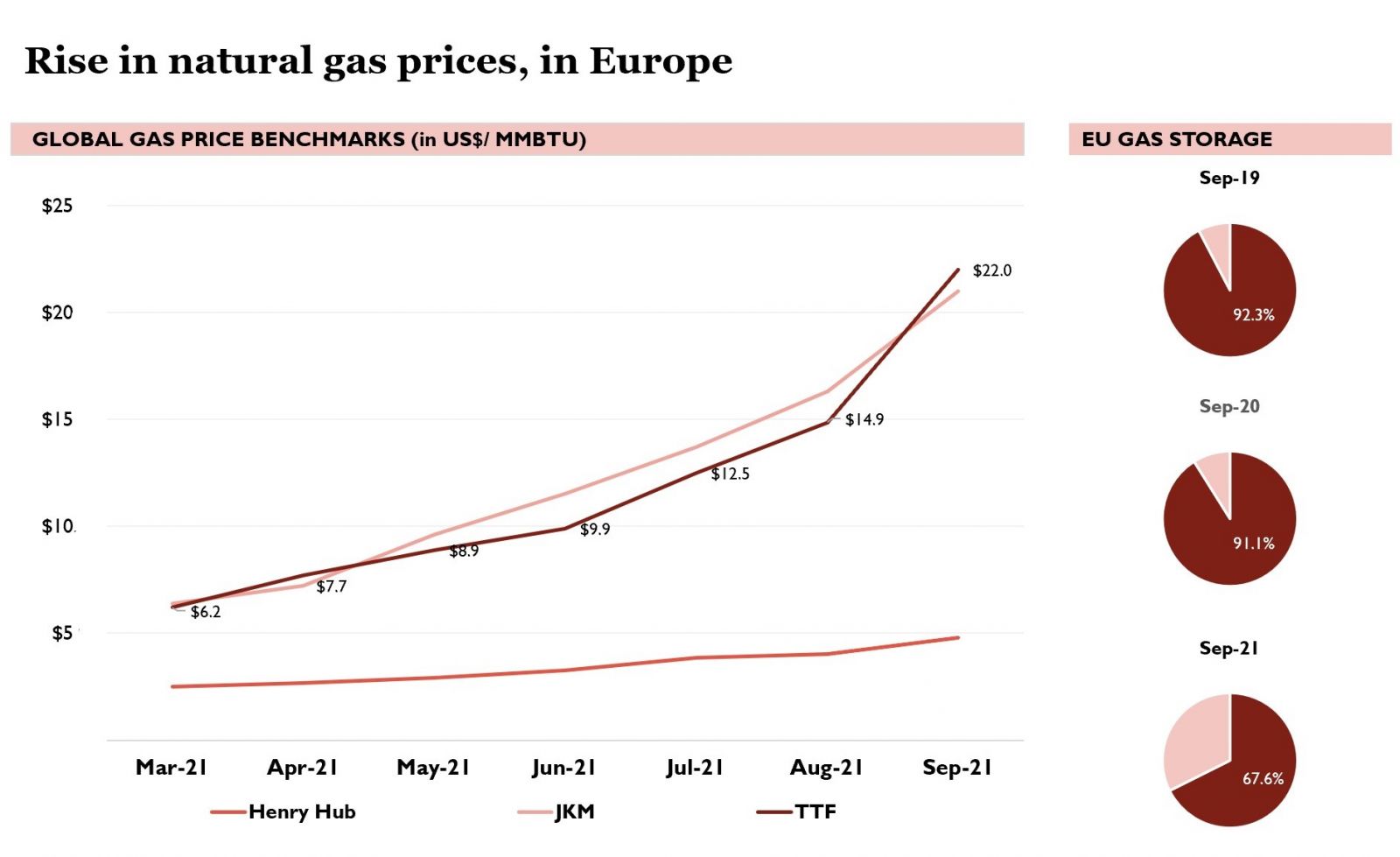 Gas storage levels across Europe are at their lowest in 10 years as countries draw down on existing gas supplies and hold back from topping-up amid higher prices.

A colder-than-normal winter, including the big freeze in Texas in February, eliminated excess inventories, with stocks falling below the five-year average by March and April 2021. Current storage stand at less than 70% of the their nominal capacity volumes