California’s Rolling Blackouts Are The Result Of A Constrained Supply

What happens when a state closes power plant facilities without also replacing the electricity generation capacity? In short, an energy shortage whose impacts range from inconvenient to potentially dire due to a record-heat wave hitting the western part of the country – and its one that could have been avoided.

California is experiencing rolling outages for the first time in nearly 20 years due to increased grid demand in the midst of a heatwave and a failure to diversify the state’s energy offerings. The blackouts have left millions of Californians periodically without power and questioning how this could be happening.

As Gov. Gavin Newsom recently explained, “Keep It In the Ground”-backed policies that pushed for fossil fuel plant closures and increased dependence on neighboring states’ power supplies have caused a grid reliability issue:

One would think that California was dealt a bad hand – a heatwave hits during quarantine, causing a spike in cooling demand on a grid already strained from people working or studying from their couch, eventually triggering blackouts. But that’s not exactly the case. In fact, demands on the grid dropped during quarantine, and the state’s grid operator, California Independent System Operator (CISO), has even assured the public that the stay-at-home order resulted in “no impacts to grid reliability.”

The bitter reality is that the game was designed against Californians, by Californians pushing the state to quickly retire its existing natural gas-fired fleet and transition to more renewable energy sources – a move that CISO warned in 2019 could create reliability issues during daily summer operations. And now, a modest increase in cooling demand has tripped the grid.

Over the last five years, about 9 gigawatts of natural gas generation were retired as the state turned to renewables, but the state hasn’t added an equal amount of in-state generation capacity. Instead, California relies on importing much of its energy from neighboring states that are currently unable to export enough electricity to meet their own demand plus California’s during this record-breaking heatwave. As Greentech Media recently reported:

“Wade Schauer, Americas research director at Wood Mackenzie Power & Renewables, noted that California has shut down about 5 gigawatts of dispatchable generation since 2018, while it has only added about 2,200 megawatts of ‘non-intermittent’ generation since then.

“California ‘just hasn’t done enough to keep resource adequacy where it should be, and the reserve margins have gotten tighter more quickly,’ Schauer said. The chart below from WoodMac indicates how California’s total generation capacity has fallen below both gross peak and net peak needs, leaving a gap that must be made up from imports from other states.” 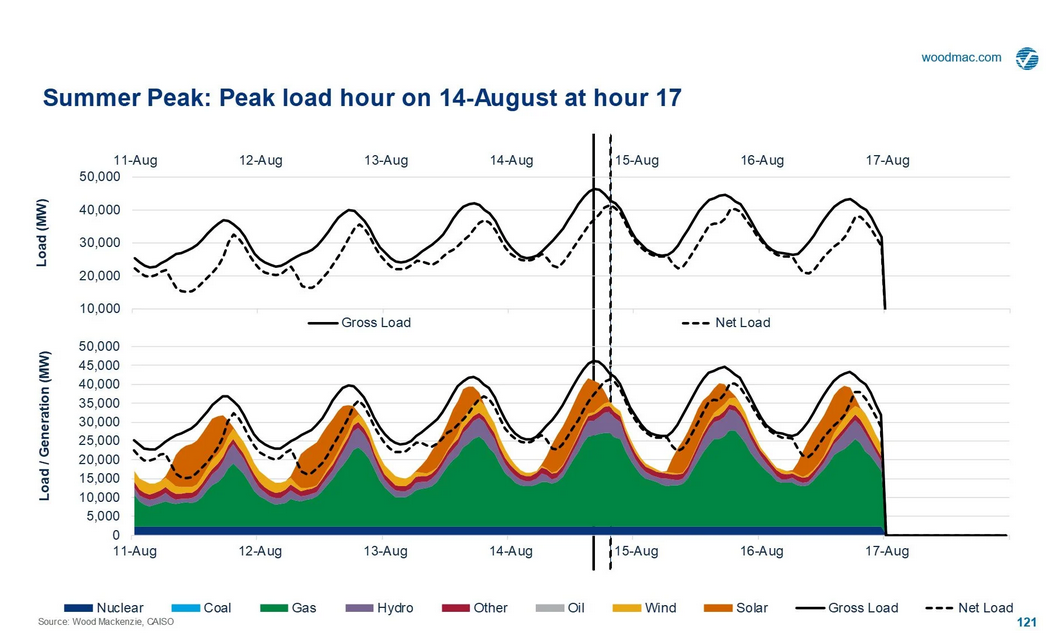 It’s ironic that the retired plants could power 6.8 million homes, and now millions are without power as blackouts sweep through the state, despite triple-digit temperatures and heat indexes reaching dangerous levels.

During a recent news conference, Gov. Newsom admitted that the state failed to plan for these shortages and announced an investigation into the grid’s failure to provide reliable energy.

“We failed to predict and plan these shortages and that’s simply unacceptable. People should have been told sooner and that is exactly the purpose of this investigation.”

California is the only state experiencing rolling blackouts of this magnitude among the eleven other western states facing the heatwave. And while officials in other states are also working to conserve power during this time, they are confident in their supply and reserves.

The same can’t be said for California. From 2013-2017, the state imported over 80 million megawatt-hours per year, with imports accounting for 41.5 percent of California’s 2017 energy portfolio. And with other states facing high energy demands, California can’t find a seller.

The problem will only worsen if California continues to pursue bans on residential natural gas usage in an attempt to electrify homes. If running the air conditioning units will strain the grid now, then the state is woefully underprepared for wide-scale electrification of gas-powered appliances – water heaters, furnaces, dryers and cooking equipment. In the last two years alone, annual loads have peaked more than 5 gigawatts higher than average.

California could have avoided this outcome if it had listened to the voices of reason opposing this shift away from reliable energy sources without adequate planning. The fact that the shortfall is only now becoming an issue is a failure of policymakers to prepare for this eventuality, according to California ISO President Stephen Berberich:

“The situation we are in could have been avoided, there is inadequate power available during the net peak, the hours when the solar [generation] has left the system.”

Natural gas-fired power plants support peak electricity management with their rapid output capability, making them an important part of the grid system, even as renewables become more integrated into energy streams. In fact, California Public Utilities Commission President Michael Picker predicted that the lack of this capacity could cause an energy crisis in a 2018 report on the state’s shifting energy landscape:

“If we are not careful, we can drift into another energy crisis.”

“We still need gas for renewables integration. We can’t jeopardize reliability even though we know where we want to go in terms of long-term decarbonization.”

The warnings were never heeded.

California is now facing a serious problem. Unfortunately, Californians are now the ones suffering the consequences of policies that catered to activists’ calls for a swift transition away from natural gas, without an adequate energy supply and despite the warnings from power generation experts – the grid and utilities operators that intimately understand the state’s energy needs – and could be facing similar situations in coming summers, as well.

The post California’s Rolling Blackouts Are The Result Of A Constrained Supply appeared first on .