Mike Hennesey is the Chief Growth Officer for Northwest Lineman College. Mike is responsible for the pursuit, identification, and development of new business opportunities that are in line with... Let’s start with the definition of polarity: The electrical property of a body that either develops magnetic poles or has terminal points between which exists a difference in potential. The word “polarity” itself refers to these poles, meaning positive and negative (or north and south, as with Earth’s magnetic poles). Poles are given terminals that designate direction of current flow. Poles of electrical polarity (positive and negative) are present in every electrical circuit. In theory, electrons flow from the negative pole to the positive pole. In a direct current (DC) circuit, one pole is always negative, the other pole is always positive, and electrons flow in one direction only. In an alternating current (AC) circuit, the two poles alternate between negative and positive, and electron flow reverses back and forth. In every situation, there are two poles: positive and negative—or, in transformers, additive and subtractive.

When only one lead of the high-voltage winding is brought out (the other being connected to the tank internally), it shall be designated as H1. For polarity marking and testing, the H1 terminal shall always be located on the left when facing the front side of the transformer. The terminals of any winding whose leads are brought out of the case shall be numbered 1,2,3,4, etc., the lowest and highest numbers marking the full winding and the intermediate numbers marking portions or taps. Thus, If the transformer has a center tap used as a neutral, it shall be designated as X2. Internally, secondary winding leads are marked A,B,C,D from left to right.

Transformer polarity depends on which direction the coils are wound around the core (clockwise or counterclockwise) and how the leads are brought out from the winding ends to the terminals. The two coil windings have distinct orientation with respect to one another—each coil can be wound around the core clockwise or counterclockwise. If the primary and secondary coils are wound in opposite directions, the polarity is additive; if wound in the same direction, it’s subtractive. 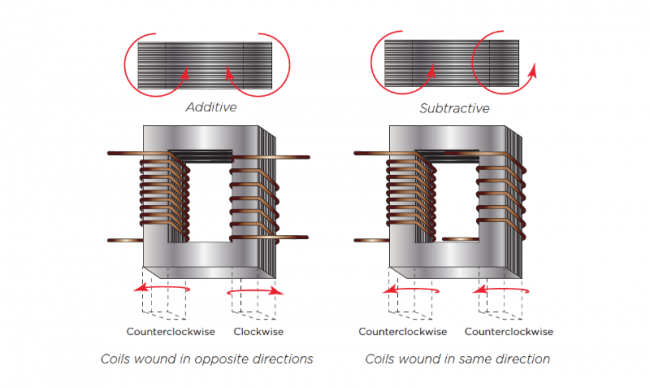 Another element in determining transformer polarity is noting how power flows through the windings. To understand this, voltage and current that flows across the transformer windings must be observed when peak positive voltage is being produced. In a 60 Hz AC circuit, voltage changes polarity 120 times per second. Any time the current is flowing into one of the primary terminals, it will be flowing out of one of the secondary terminals. 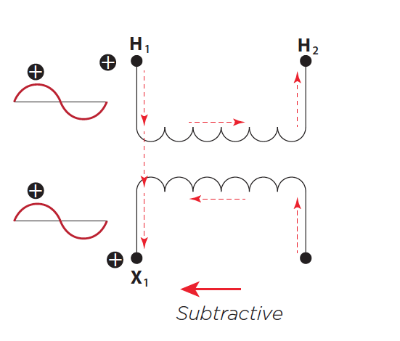 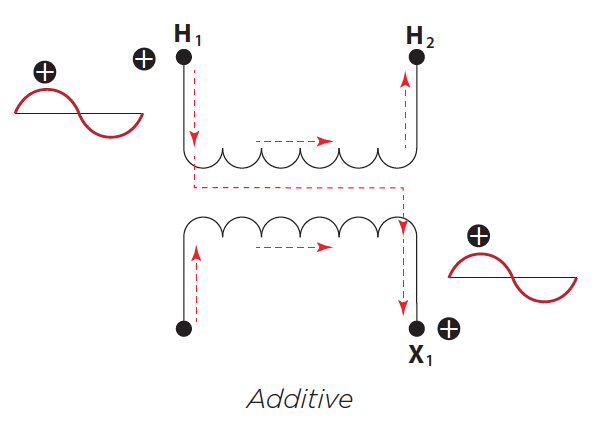 Note that the secondary terminal designation depends on polarity; with subtractive polarity X1 is on the left, and with additive polarity it is on the right.

It is unusual for a line crew to need to conduct a polarity test, since polarity is confirmed on nameplates; however, there could be a situation where a nameplate is missing and polarity needs to be verified. Verifying the polarity of a transformer can be accomplished with a simple voltage test using the following steps:

Another way of understanding polarity is to view the windings on the same horizontal plane (similar to a single-winding autotransformer) along with the direction of current flow in each winding. 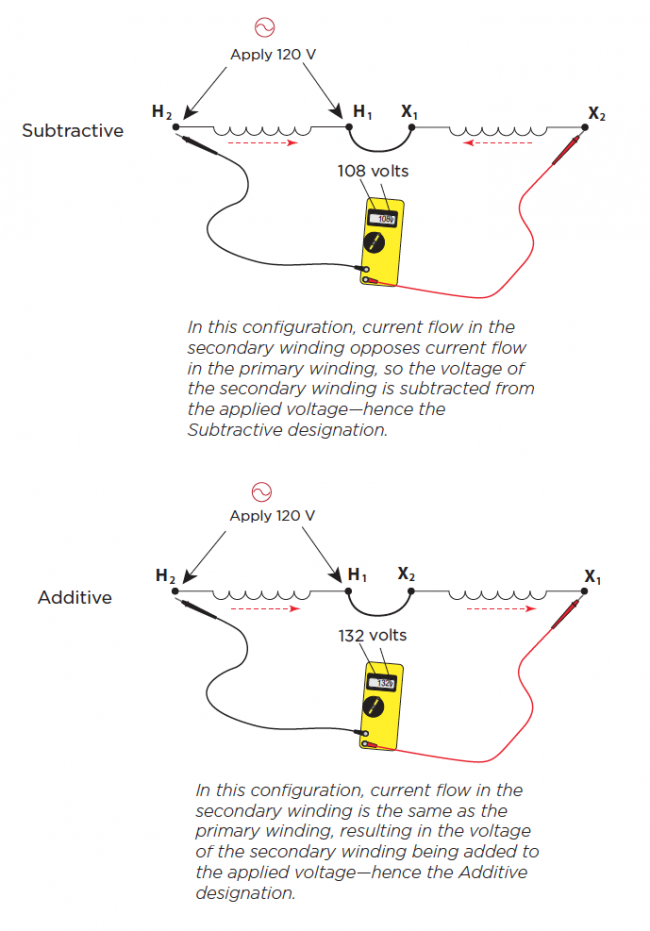 THE ORIGIN OF POLARITY

Transformer polarity became an inherent electrical consideration when the first AC transformers were developed back in the late 1800s. At that time, pioneers learned what polarity meant when they attempted to parallel transformers for more capacity. They quickly discovered that the transformers had to be the same voltage, and would only operate properly in parallel when the terminals were connected a certain way. There were no standard markings for the transformer terminals, and nameplates did not include any indication of polarity. Frequently, connecting of these early transformers was done by trial-and-error, and electrical workers were exposed to hazards created by short-circuits and damaged transformers. Eventually the industry recognized the need for clarification and standardization of various aspects of transformer manufacturing, including polarity.

In 1918, the American Institute of Electrical Engineers and other organizations established standards for external transformer lead markings. These markings served as the basis for establishing polarity as we know it today. The basic standard was as follows: The leads of any winding (high voltage or low voltage) brought out of the case shall be numbered 1,2,3,4 etc. The lowest and highest numbers represent the full winding and the intermediate numbers represent fractions of the winding or taps.

As an example, assume we have a two-winding transformer with a primary voltage of 25,000 volts and a secondary voltage of 7,200 volts. A comparison of the voltage stress between the windings for additive and subtractive polarities can be determined as follows:

Since there were large numbers of additive transformers in service, it was decided to continue manufacturing additive polarity transformers for voltages below 8,660 volts. Manufacturing transformers with different polarities is strictly a U.S. standard. Canadian standards are additive and Mexican standards are subtractive (not the clearest answer to the lineworker’s question, but hopefully somewhat understandable). Lineworkers should be informed that polarity differences are not a significant problem in the field, as transformer nameplates confirm polarity, and it is rare lineworkers are confronted with paralleling or banking transformers of different polarities.

The voltage stress between windings is considerably higher with an additive transformer.

Today’s standard has evolved over time from ANSI (American National Standards Institution) to the IEEE (Institute of Electrical and Electronic Engineers). 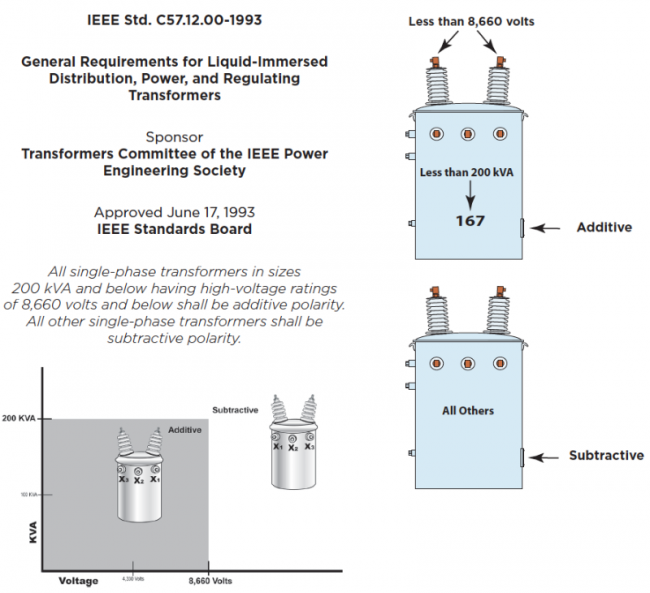