A white paper entitled AI Insights: The Power Sector in a Post Digital Age released by the Eurelectric’s Beyond Digital Platform in late Nov 2020 explores the opportunities for utilities to accelerate the energy transition by facilitating the role of artificial intelligence (AI) and digitalization in the power sector. It says that by coupling their deployment with AI applications such as predictive algorithms, the power sector can enable an efficient integration of variable sources of energy, reduce issues around reliability and intermittency, support grid stability, improve forecasting leading to an optimal match between supply and demand.

“The ongoing volatility of the grid remains a key challenge as the share of renewable generation grows. AI-driven data analysis will look to counteract this by ascertaining the optimal location for low carbon technologies by predicting the ongoing impact on network capacity.”

One of the most important ways AI can drive the energy transition will be in optimizing distributed energy resources (DERs), battery storage and vehicle-to-grid technology. Virtual power plants (VPPs) will aggregate DERs, electric vehicles and flexible loads to modulate aggregated power exchanged with the grid and ensure grid stability, delivering increased flexibility and support.

AI offers enormous potential for the energy industry and is a fundamental building block of the clean energy transition. It will lead to greater automation, saving money and driving operating efficiencies, the development of new products and services and - most importantly - enable a reduction in carbon emissions. But the extent to which it will deliver the greatest possible returns for the energy industry will depend both on the acumen and involvement of senior executives to identify opportunities to create new value streams and ensure that projects progress from proof of concept stage, but also active and constructive engagement with regulators and policymakers.

The International Data Corporation predicts that worldwide revenues for the AI including software, hardware and services were worth as much as $156 billion in 2020, increasing 12% compared to 2019. AI revenue will top $300 billion by 2024 with a five-year compound annual growth rate (CAGR) of 17%. According to McKinsey, a consultancy, if Europe continues at its current pace it could add around €2.7 trillion ($3.26 trillion), or 20% to its combined economic output by 2030. But if it accelerates to catch up with the US, a total of €3.6 trillion ($4.35 trillion) could be added to GDP over this period.

Nearly 25% more companies used AI in 2019 compared to 2018, and most executives report a subsequent increase in revenue, with 44% of those who adopted it saying AI reduced costs, But the early mover advantage will fade soon, warns the Deloitte AI Institute in its report Thriving in the Pervasive Era of AI. While using AI for efficiency improvements can boost productivity, companies can go beyond this objective by leveraging AI to create new products, the report says. The International Data Corporation predicts that worldwide revenues for the AI including software, hardware and services were worth as much as $156 billion in 2020, increasing 12% compared to 2019. AI revenue will top $300 billion by 2024 with a five-year compound annual growth rate (CAGR) of 17%. According to McKinsey, a consultancy, if Europe continues at its current pace it could add around €2.7 trillion ($3.26 trillion), or 20% to its combined economic output by 2030. But if it accelerates to catch up with the US, a total of €3.6 trillion ($4.35 trillion) could be added to GDP over this period.

Time will tell whether AI lives up to its hype, but some predict it will lead to future innovations we cannot even imagine. Google’s CEO Sundar Pichai has identified AI as one of the most important things humanity is working on, potentially more profound than electricity or fire. One can dismiss the Silicon Valley rhetoric as self-serving. Eurelectric notes that, “… while the benefits (of AI) are huge, the implications of careless management or losing control are serious.”

In the short term the immediate applications of AI are likely to be around optimizing existing assets but the highest potential may be found at the intersection of different sectors, for example the electrification of transport and heat, smart homes to maximize energy efficiency through integration and autonomous optimization, flexibility services for grids and edge computing to enable the rapid response of decentralized energy assets with limited intervention – topics covered in the article on page 16 and the book review in this issue.

Despite the great potential, the Eurelectric white paper points out that challenges are likely to be encountered “… at the point of integration with older legacy systems” as experienced during several recent proof-of-concept Big Data projects at European utilities. Conclusion?  “… Big Data has so far failed to live up to its expectations as the ‘next big thing’.” The potential may be great, but so are the barriers to successful execution. 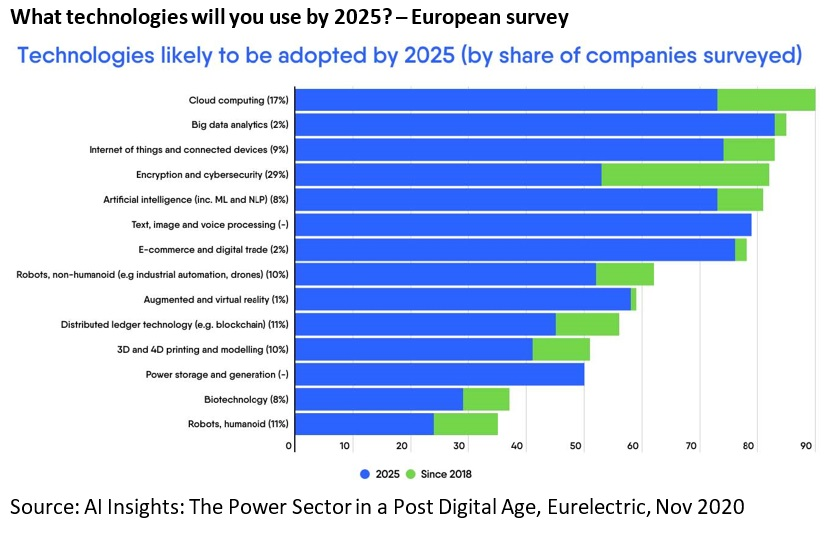 Smart devices such as Amazon’s Alexa, Google’s Home and Nest, often described as part of a ‘smart home’, allow customers to set their thermostats and other control systems to automatically monitor their energy consumption based on desired comfort levels. Appliances can be switched off when power is expensive and EV batteries can be charged when power is cheap. Energy suppliers can use AI to forecast likely customer behavior and plan accordingly.

One of the most important ways AI will drive the energy transition is in optimizing distributed energy resources (DERs) and battery storage with customer demand, including EVs. The white paper notes, “As the electricity grid morphs from a one-way transmission of electricity from large centralized power plants to hundreds of thousands of small generators and smart devices with bidirectional flows, system management requires a superhuman effort” – the topic of the Book Review in this issue.

Many virtual power plants (VPPs) and Internet of Things (IoT) projects are already in operation, where flexible resources are aggregated to provide services to the grid. Some were supported by the EU’s Horizon 2020 program, for example a smart system of renewable energy storage based on integrated EVs and batteries to empower mobile, distributed and centralized energy storage in the distribution grid’ (INVADE) - a cloud-based flexibility management system incorporating machine learning and other advanced analytical techniques. The project explores how big data, machine learning and analytics can be integrated into existing smart home solutions.

EVs present an opportunity for flexibility where vehicle-to-grid (V2G) technology enhanced by AI can be used to optimize charging patterns. A team from Stanford University, the Massachusetts Institute of Technology and the Toyota Research Institute published findings from battery testing aimed at cutting EV charging times down to 10 minutes using AI while limiting the degradation of lithium-ion batteries.

The Eurelectric’s white paper is spot on in identifying the potential of AI in managing an increasingly decentralized and complex network of small and large generators, mostly supplied by variable renewable energy resources serving consumers prosumers and prosumagers with different service needs.

As the following articles in this issue highlight, the traditional optimization solutions used when the industry was centralized and power flows where predictable and unidirectional no longer apply, nor will human operators be able to handle the emerging level of complexity. Weather we call it AI or not, the old ways of doing things will not do.

Big Data has so far failed to live up to its expectations as the ‘next big thing’.” The potential may be great, but so are the barriers to successful execution.

I think we're seeing this because Big Data isn't a black-box, off-the-shelf solution for utilities. The energy data is vast & the potential is immense, but it takes creativity & hard work to implement real changes with it in the long run