Rob Gramlich has been working to drive grid modernization and expansion efforts since the mid-1990s. Through senior positions in government and the private sector, he has developed and led...

As multiple experts have documented, the vast majority of power plant capacity outages in Texas are at gas generators. ERCOT data show that around 30 GW of fossil capacity has been on outage. The first column of the ERCOT data shows thermal (fossil plus nuclear) capacity outages, while the second column shows the installed capacity of Intermittent Renewable Resource (IRR), or wind plus solar, that are on outage. Gas generators appear to have been affected by a combination of gas well freeze-offs cutting production, gas pipeline capacity being prioritized for building heating instead of electric power deliveries, and weather-related equipment failures. Well freeze-offs cut Texas gas supplies by 7 Bcf/day, nearly 1/3 of Texas’s gas production in 2019.

Renewable performance has been around the levels planned for. Around 20 GW of wind and solar capacity has been offline in ERCOT, likely mostly due to icing events at wind plants. It appears that many ERCOT wind plants are not outfitted with blade heaters to prevent icing, equipment that is often used in colder climates. Such capabilities of course have not been considered necessary in southern states, but weather events like this one could change those plans going forward. Even so, icing appears to have reduced wind output by only a few GW or about 10 percent of the total generation loss. Wind and solar output has been above levels expected by ERCOT for most of Monday and Tuesday, as others have documented. As shown below, total wind and solar output only briefly dropped below the level ERCOT plans for in its extreme/contingency planning scenario for a few hours on Monday evening, indicated by the horizontal black line. When the rolling blackouts began Monday morning wind output was relatively high, and solar output on both Monday and Tuesday was abnormally high for winter, likely due to the fact that the efficiency of solar panels markedly increases in cold weather. 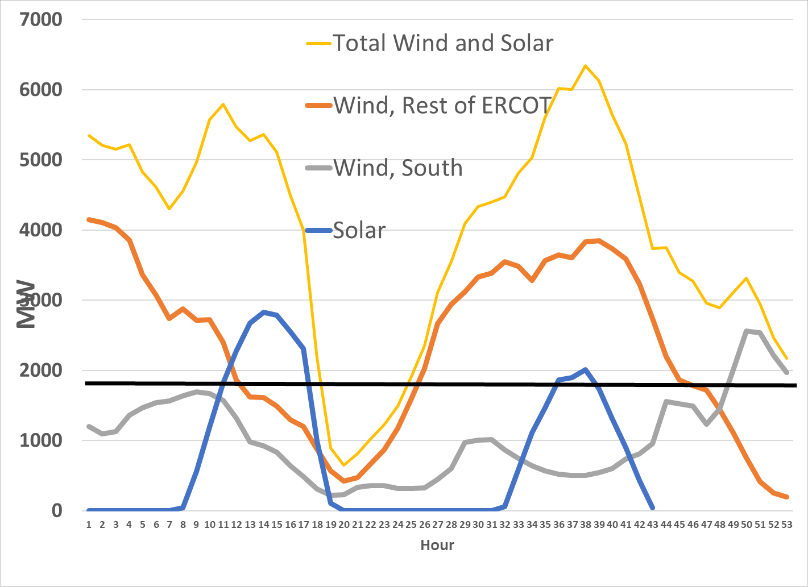 Bloomberg News paraphrased Dan Woodfin of ERCOT confirming that wind outages have been the least significant factor in the blackouts. In that same article, Daniel Cohan, a professor at Rice University in Houston, said that “The performance of wind and solar is way down the list among the smaller factors in the disaster that we’re facing,” and that blaming renewables for the blackouts “is really a red herring.”

All energy sources were affected by equipment failures, including one of Texas’s four nuclear units. Some Texas coal generators are also reportedly offline, likely due to equipment failures or frozen coal piles.

To the north in SPP, which has also experienced rolling outages, more than 50% of total gas capacity was on outage on Monday and Tuesday, compared to less than 15% of wind capacity. 2-4 GW of coal and diesel capacity were also offline in SPP throughout Monday and Tuesday.

Transmission plays a key role in addressing generator outages and demand spikes caused by extreme weather. As ERCOT and the Texas public utility commission explained in comments to FERC, “One of the most critical elements of system resilience is ensuring that the transmission system is planned in such a way as to ensure continued operations following an unexpected outage of one or more generators or transmission elements.” Similarly, the New York grid operator noted that “These interconnections support and bolster reliability and resilience by creating a larger and more diverse resource pool available to meet needs and address unexpected and/or disruptive events throughout an interconnected region.”

Weather events are typically only at their most extreme in a relatively narrow area, so transmission allows electricity supplies to be delivered from neighboring regions. That was the case over the last few days, just as it has been during prior extreme weather events. Early in the day on Monday, SPP and MISO experienced extreme cold, leading them to rely on imports from regions experiencing milder temperatures, primarily PJM to the east. As shown below, this was reflected in the strong price gradient across MISO, with high prices in the west and low prices in the east. As is often the case, a large amount of transmission congestion at the MISO-PJM seam in Illinois and Indiana prevented more power from reaching SPP and MISO. 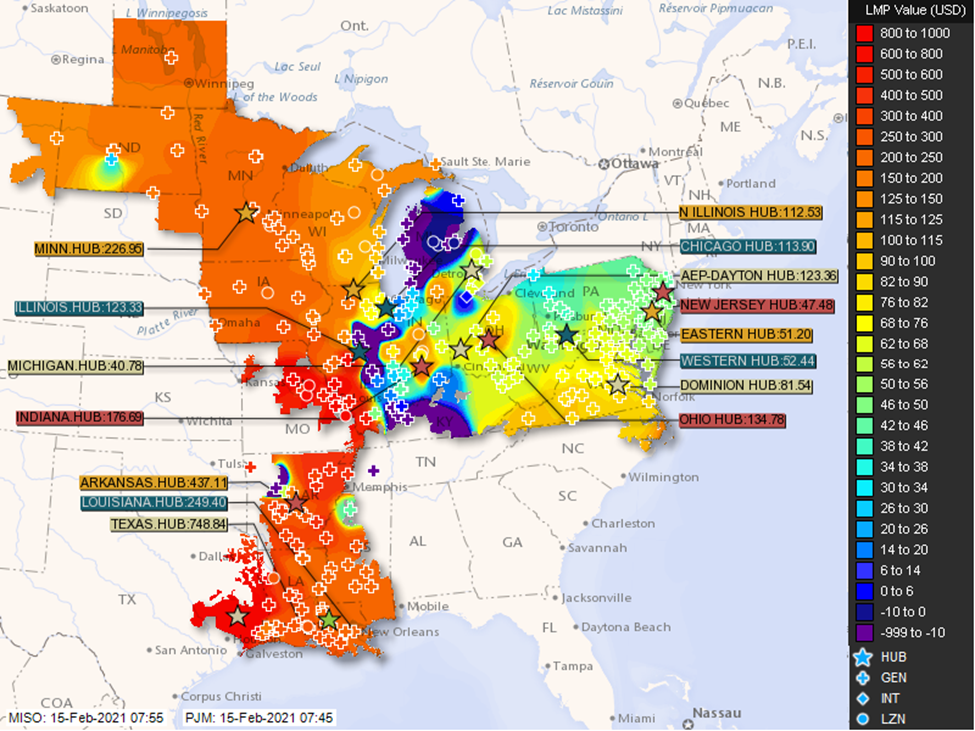 On Tuesday morning the pattern reversed, with power prices higher in PJM than in northern MISO, though prices were extremely high in southern MISO. More transmission between northern MISO and southern MISO, and between PJM and MISO, could have alleviated these shortages. 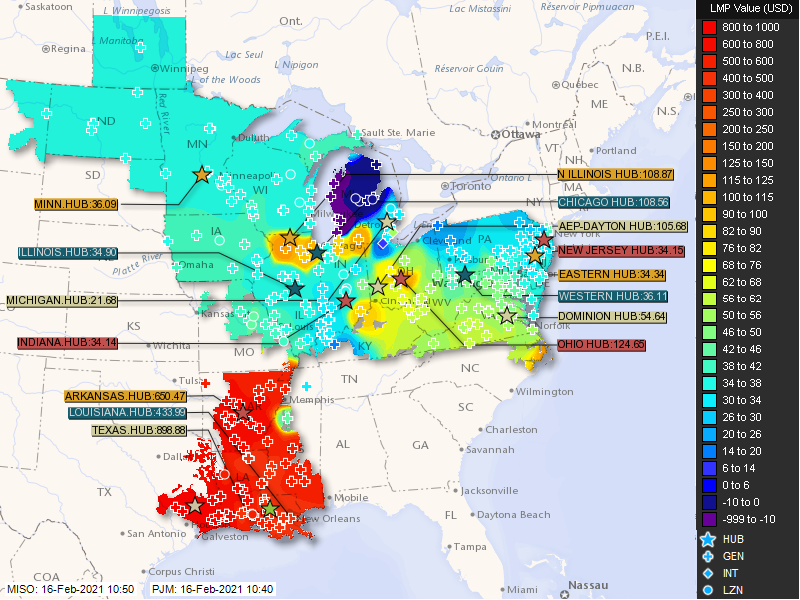 A similar phenomenon played out during the January 2019 Polar Vortex event, with power initially flowing west from PJM to MISO and then east from MISO to PJM as the extreme cold shifted eastward. During both events PJM wind output was very high, helping to enable the large exports to MISO.

As shown in the first chart above, Texas’s strong internal transmission network also allowed solar, in-land wind, and coastal wind resources to work together to help keep the lights on. Coastal wind output (comprising most of the wind output in South ERCOT) provided particularly high output during the most extreme shortage period on Monday morning. Coastal winds are primarily driven by the temperature difference between the land and the ocean. Because the ocean stays a more constant temperature than the land, coastal winds are highest during periods of extreme heat and cold, which happen to be periods of highest electricity demand. Coastal wind resources also tend to peak in the morning and evening, when electricity demand peaks with extreme low or high temperatures, because that is when the temperature difference between the land and ocean is greatest. Coastal wind resources are also in a more temperate climate, so they may also have been less affected by icing events that appear to have affected some inland wind plants.

The value of using transmission to aggregate complementary renewable resources has been confirmed by numerous recent studies. Detailed 5-minute modeling showed that, with a strong grid connecting the Eastern U.S., very high levels of renewable energy can be reliably and economically integrated.

NREL’s Interconnections Seam study, and other recent academic research, has shown even larger benefits if the Eastern, Western, and ERCOT grids can be combined into a single national grid. Notably during this recent event, power supplies were abundant in the Western U.S., and power prices along the East Coast generally remained low. A national transmission system could have prevented the outages in the Central U.S. by utilizing spare generating capacity from regions that were less affected by the extreme cold. In short, transmission is essential for aggregating diverse sources of electricity supply and helping to cancel out the localized impact of weather events that can take many forms of generation offline.

“Common mode failure” outages simultaneously affecting many generators can be accounted for in capacity planning. Probabilistic tools are used to account for correlated output profiles of wind or solar resources, but not conventional generators. Despite nearly a dozen correlated outage events like this over the last decade, resource planners typically consider conventional generator outages to be fully independent of each other.

Accounting for correlated outages would significantly reduce the resource adequacy value assigned to conventional resources that experience such outages, and would properly account for diminishing marginal returns for resource adequacy as reliance on any one fuel source increases. Accounting for correlated outages would show the value of generation diversity, confirming the intuitive fact that because all energy sources can be disrupted, being overly dependent on any one isn’t wise. As noted above, transmission plays an essential role in enabling that diversity.

The unprecedented loss of generation and spike in demand was not caused by the ERCOT competitive market structure, and would not have been prevented by less competitive structures. This is confirmed by the fact that customer outages occurred in ERCOT’s competitive energy-only market, as well as the SPP and MISO markets which have vertically integrated utilities and use regulation to impose resource adequacy requirements. In a competitive market, the responsibility for procuring sufficient resources and ensuring their performance falls on retail suppliers. Those suppliers must be financially well-equipped to perform that important function. The Public Utilities Commission of Texas regulates suppliers to make sure they are sufficiently creditworthy to handle any and all power market conditions. It is not clear at this time whether those requirements were stringent enough. The PUCT also regulates market participants for their performance, through orders such as this one. It is not clear yet whether sufficient oversight and enforcement was performed. There will surely be calls for mandatory centralized capacity markets after this situation. Some form of compensation for stand-by generation may well be in order. However, having sufficient steel in the ground, or capacity, was not the problem with this event. It was a performance issue, for which market price signals are usually stronger tools than availability requirements to drive performance.

I know in 1999, Texas first deregulated its energy market which allowed retail competition, which you cite as not necessarily being the problem. But I do wonder whether the deregulation had an impact on poor oversight and enforcement by the PUCT in ensuring retail suppliers were in good enough shape to perform under these circumstances.

Thank you Rob and Mike for a well thought out analysis of the recent events.