We are experiencing an exciting time in the United States where we are blessed with outstanding solar and wind energy resources, improving renewable generation technology, and decreasing capital costs for renewable energy. As states re-evaluate their Renewable Portfolio Standards (RPS) and the federal government evaluates renewable energy tax credits, a key question is what level of renewable energy is possible in the U.S.?

CAISO has experienced curtailments in 31.1% of its market intervals in 2017, which was an increase from 21.1% in 2016 and 9.6% in 2014. California currently has 5,000 megawatt (MW) of rooftop solar, and the capacity is growing with lowering solar panel prices driving further market penetration.

One of the problems that CAISO currently faces is the growing solar energy production, shifting power demand patterns, fixed nuclear, hydroelectric and other qualifying facilities on its system that must operate. The “duck curve” is indeed changing in California as shown in Graph 1. 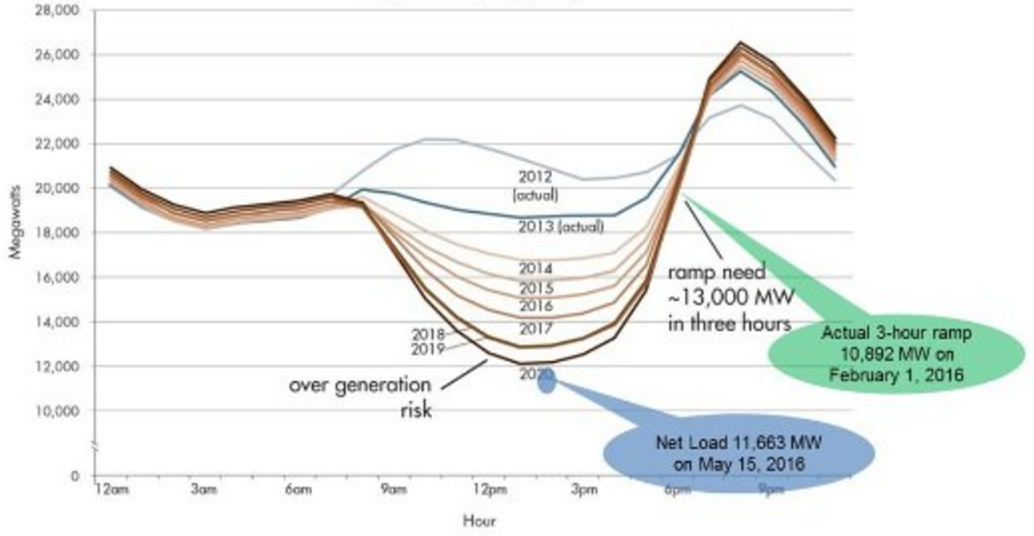 Unfortunately, our sources of carbon-free electricity with the most potential are solar and wind which are intermittent and variable, respectively, and consequently not dispatchable.

How do we balance our need to: 1) keep the lights on and the grid reliable, 2) accept all renewable energy when it can be produced, 3) use carbon-free resources such as nuclear, and 4) allow generators to make a profit to sustainably create energy for our economy?

A couple of potential solutions come to mind:

Expansion of our current grid to connect renewables over a larger geographical area would help in dampening risk and reducing renewable’s variability.

Increase energy storage with either, 1) hydro pumped storage, 2) batteries, and/or 3) thermal to shift the energy supply from those times of excess energy production to those times of high demand (and high energy value).

Unfortunately, the top 10 hydro pumped storage facilities in the US combined could supply the average U.S. electricity needs for only 43 minutes. Currently, there is enough nuclear capacity in the US today to serve as the necessary dispatchable, carbon-free generation for the future.

In Texas and California, wind and solar, respectively, are disrupting the power marketplace.

When an excess of California solar energy pushes its product into the grid from the 5,000 MW of rooftop solar installations, it temporarily depresses wholesale electricity prices, forcing nuclear, coal, and/or natural gas baseload plants not to be economically dispatchable. This fact is demonstrated by the 2016 bankruptcy of the La Paloma natural gas power plant which was unable to recover its costs in the face of cheap solar energy. The same phenomenon is happening in Texas as growing wind generation is pressuring gas-fired generation.

The California example is shown in Graph 2 from the US Energy Information Administration (EIA) below as California power prices track natural gas prices less and are influenced by renewable generation.

With large amounts of wind (>10,000 MW of potential capacity) coming online in Texas in the next three years, the Electric Reliability Council of Texas (ERCOT), sees continued high wind penetration in the state’s energy mix as wind contributed 16,141 MW on March 31, or almost 40% of total system load. The impact of wind is shown in Graph 3 below, also sourced by the US EIA.

As subsidized renewables in California and Texas push down energy market prices, we should be concerned that energy prices may not be sufficient in the future to incent the building of new baseload generation.

Increased natural gas export as LNG brings the potential for higher natural gas prices for power generators in tandem with decreasing power prices from renewables. This shrinkage of margins for new gas power plants could shrink the future new power supply even further.

Is our baseload power capacity eroding and if so, what are the key drivers? Is it explained by more renewables, low natural gas prices, increasing operations and maintenance costs, or stagnant load growth, or a combination of all four factors?

Solar capacity has increased in CAISO, however, it has led to negative power prices at times when energy output was peaking, but demand was not. This was verified in February when the real-time CAISO power price dipped below $0/MWh for roughly six hours, per the US EIA. This happened when generators with high shut-down or restart costs were forced to compete with other generators to avoid operating below equipment minimum ratings or shutting down completely. Graph 4 demonstrates the shift in real-time power prices for the first quarter of 2017 in dollars per mWh. The impact of solar energy production on the California power market pricing is shown in Graph 5 sourced by the US EIA.

In conclusion, the U.S. will need to evaluate the economical limit of renewable energy penetration in context with capital expenditures for an improved grid, increased energy storage capability, and the financial incentives to keep base load plants in the energy mix.

Interesting economic exercise; spend $1B on a 1000MW pumped storage plant or $1B on a couple of hundred miles of HVDC line with convert terminals?