We have seen dramatic changes in the California “Duck Curve” over recent years. So what is the “Duck Curve”? Essentially, it shows the amount of non-solar, non-wind energy generation that is required by gas and nuclear power stations each hour of the day to satisfy demand. Unfortunately, with growing solar production, base load power plants designed to run continuously and efficiently for long production runs are being asked by the market to ramp-up and ramp-down during each day.

Graph 1 shows the predictions in 2013 for the impact of solar during the day for the California Independent System Operator (CAISO) followed by the updated version for 2019 in Graph 2.

In 2013, the projection was that the over-generation risk from more and more solar would be above 12,000 megawatts (MW). 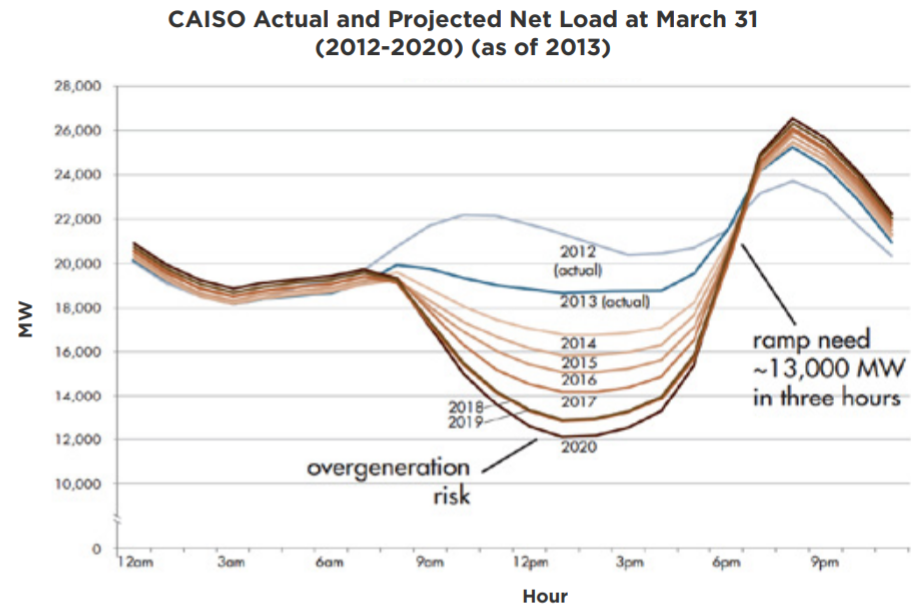 However, in 2019 the actual projection of the over-generation risk from more and more solar is really about 7,000 MWs, a full 5,000 MW lower than just 6 years earlier. This phenomenon is due primarily to utility-scale solar projects coming online for California utilities, and is about 40% lower than the minimum net load originally forecasted for March 2020.

So what does this eroding of the “base load” required MW energy supply mean to ratepayers and taxpayers of California? 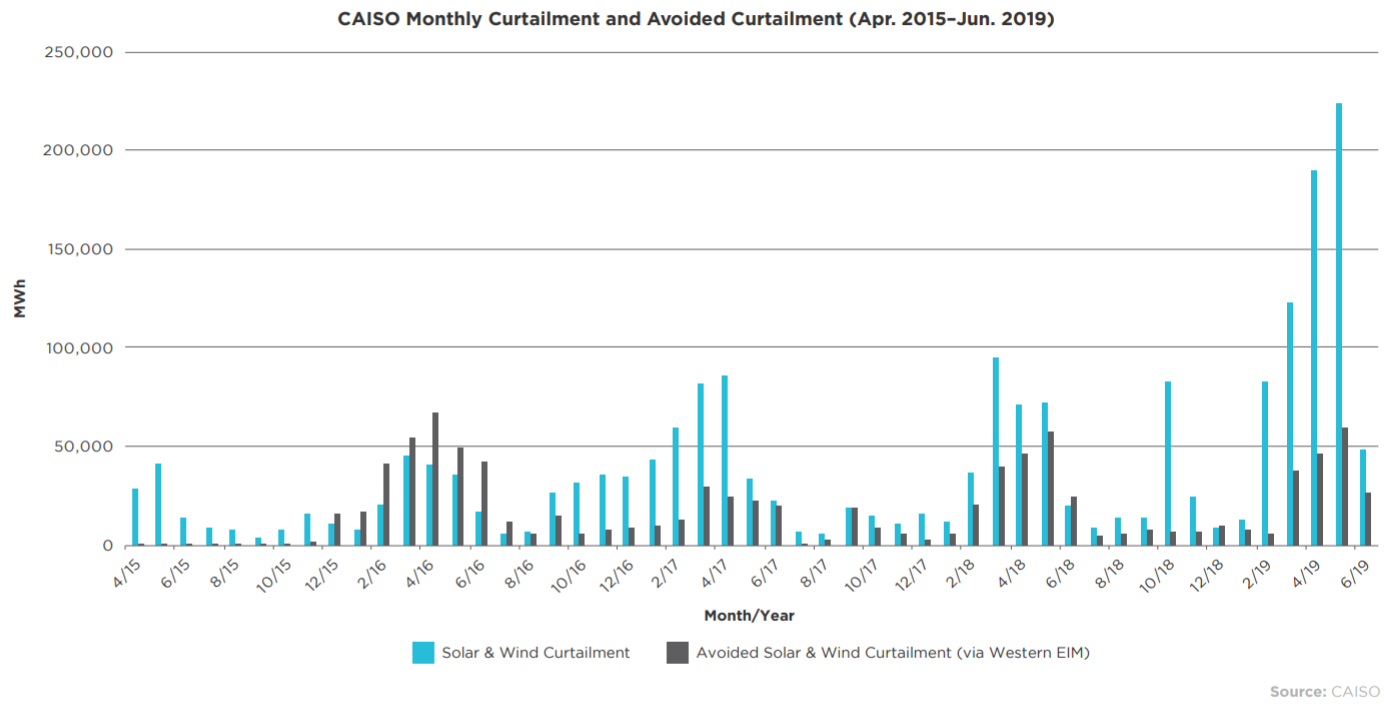 So what is the cost of these solar and wind energy curtailments? Assuming a 25% capacity factor for solar installations, a 30% ITC, a cost of capital of 8%, and a 20-year project life, each kwh of solar carries with it a levelized cost for the ITC for federal taxpayers of $0.0246 per kwh.

For the projected 2019 renewable energy curtailment of 891,065 megawatt-hours (MWh), curtailments in California alone amounted to a cost to federal taxpayers of $21.92 million in 2019. As more utility-scale solar projects are added to the state energy mix, curtailments will occur more frequently, thus increasing the cost to taxpayers. A logical question is: Why should California build more solar power plants at a rapid pace in order to meet the state’s environment goals, if so much power is now being curtailed and will be curtailed in the future?

What are some of the solutions?

For the projected 2019 renewable energy curtailment of 891,065 megawatt-hours (MWh), curtailments in California alone amounted to a cost to federal taxpayers of $21.92 million in 2019. As more utility-scale solar projects are added to the state energy mix, curtailments will occur more frequently, thus increasing the cost to taxpayers. A logical question is: Why should California build more solar power plants at a rapid pace in order to meet the state’s environment goals, if so much power is now being curtailed and will be curtailed in the future?

Energy storage is definitely the traditional answer to this problem. I'm curious, though, about your thoughts on some of the suggestions for alternative uses of over generation-- hydrogen production or desalination are the ones that come to mind, but I'm sure there are others. I know there may be economic challenges building out such infrastructure for something that only comes into play part-time, but is there a future for those efforts as well, or will traditional energy storage reign supreme?

Great question. The problem I can see for hydrogen or desalination vs. energy storage is the capacity factor of the former. How many hours of the day or year would you operate the hydrogen or desal plant on “distressed” solar or wind energy? If less than 50% of the time, can the project generate enough revenue in those 8 hours daily to produce a financeable rate of return project?

Ron-  Great article. Thanks for sharing.

Do you see any market design changes required to accomodate storage? And will hybrid power plants be a part of the future?

I think Time of Use (TOU) utility rates are coming and not just in California, but trials in Colorado as well. We need some mechanism to encourage demand when the supply is at its greatest, thereby reducing the need for storage. For solar/wind to truly replace coal/gas/nuclear, we either change demand (TOU) or augment renewable supply during the non-daylight/non-windy periods of the day with storage. We need bulk storage at hybrid plants to approximate what we now have with baseload plants on the grid.