Nuclear is by far the largest source of carbon-free power in the United States.  In 2019, nuclear power plants accounted for 55.1% (807.8 million MWh) of all carbon-free electricity production in the country.  There are currently 96 reactors operating in 29 states that produce about 20% of the nation’s electricity.  The average age of the reactor fleet is nearly 40 years. 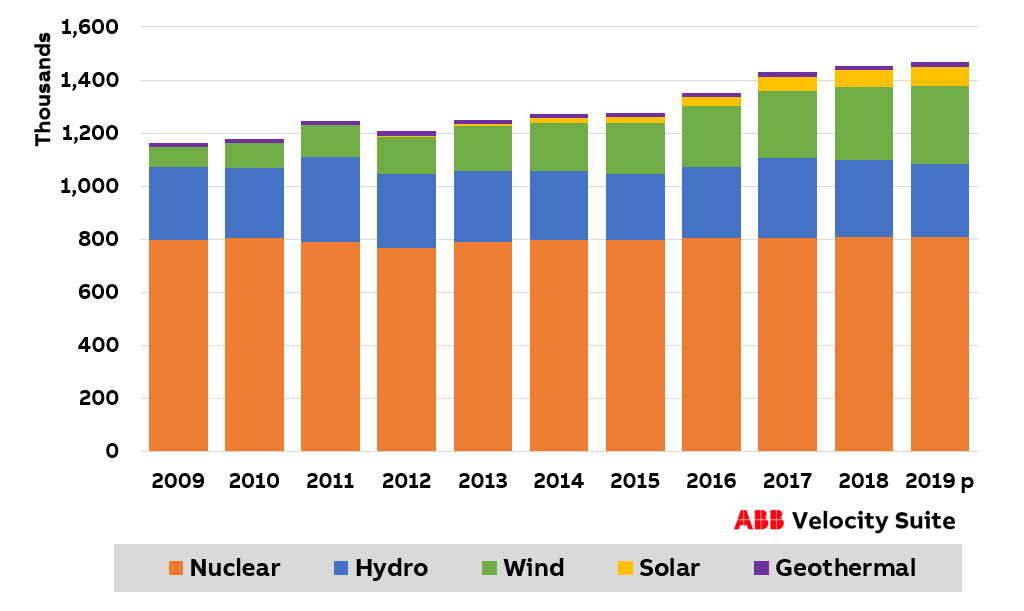 In America today, the only two nuclear reactor projects under construction are Vogtle unit 3 (1,117 MW) and unit 4 (1,117 MW) with planned online dates of late 2021 and late 2022, respectively.  The buildout is located at the site of the operating Vogtle Nuclear Electric Generating Plant (2,300 MW) in northeastern Georgia near the South Carolina border in Waynesboro.  The two new reactors are Westinghouse AP1000 (Advanced Passive) nuclear generators.  The units under construction are owned by Southern Company’s Georgia Power (45.7%), Oglethorpe Power Corporation (30%), Municipal Electric Authority of Georgia (22.7%) and Dalton Utilities (1.6%).   When construction is complete in late 2022, the Vogtle plant will be the largest nuclear power plant in the country, with roughly 4,500 MW of nameplate capacity.

Nuclear power is expected to play an integral part in meeting most state-level carbon-free power goals.  Along with the two Vogtle units nearing completion, there are several small modular nuclear plant designs that look promising.  Currently, 10.6 GW are in early development across the country, including some large-scale projects that are now on hold due to economic and environmental concerns.  The completion of some of these projects could help to mitigate the planned closures scheduled over the next five years.

According to an article published in the Tri-Cities Herald on January 30, 2020, Energy Northwest, operator of the Columbia Nuclear Generating Station (1,270.8 MW) near Richland, Washington, announced they will invest up to $2 million to study whether there is a need and public interest in developing a second nuclear reactor at the Columbia plant site.  Energy Northwest serves 27 public power companies in Washington.  The Columbia nuclear plant is the third-largest generator of carbon-free electricity in the state, accounting for about 10% of the power supply.  The rectors the company is considering include the new SMR designs like those planned by Portland, Oregon headquartered NuScale Power – 60 MW modules, with up to 12 connected, for a combined power output of 720 MW.  Currently, NuScale is developing a similar project in Idaho with an estimated online date in the mid-2020s.  The Energy Northwest study is driven by the recently (May 17, 2019) enacted Washington state Clean Energy Transformation Act (CETA), which stipulates that electricity generation will be 100% carbon-free by 2045. The legislation targets 2025 for the end of all coal power and 2045 as the end year for natural gas power in the state.  The Columbia Nuclear Generating Station came online 35 years ago in 1984 and has secured an operating license good through 2043, just before CETA takes effect.

Along with Energy Northwest’s announced plan to study the feasibility of meeting future load with new SMR designs, in late January, Paul Stein, chief technology officer for Rolls-Royce, told the BBC that the British engineering company has targeted 2029 for commissioning their SMR design in the United Kingdom.  The potential cost savings of smaller reactor designs (440 MWe) is the key driver behind the development project.  The estimated overnight-cost of the company’s design is roughly $5,000/kW, about $2.2 billion per reactor.  In contrast, the recently shelved massive 2.7 GW Moorside project had reached an estimated development cost of more than $20 billion, forcing the project to shut-down development.  Rolls-Royce is leading the SMR project development with a consortium of 8 other entities including, Assystem, Atkins, BAM Nuttall, Laing O-Rourke, National Nuclear Laboratory, Nuclear AMRC, Wood, and The Welding Institute.  In order to meet the 2029 commissioning date, the company will need to complete the design and undergo the tedious and expensive process of navigating the complex UK generic design review process.

Adding to the recent renascence of nuclear as a global carbon-free power resource, in late December, an Australian federal inquiry recommended partially lifting a country ban on nuclear energy to explore nuclear power as a component of future carbon-free electricity goals.  Australia currently leads the world in per-capita investment in clean energy, but with the massive buildout of wind and solar comes the problem of intermittency and the need for significant investment in transmission.  The report suggests that new technology with greater ramping capability could allow ‘nuclear’ and ‘renewables’ to work together.  The group studying nuclear alternatives suggested looking at how France has increased the flexible operation of the country’s nuclear plants, and specifically, how new SMR technology, like that being developed by America’s NuScale Power, might be developed and deployed within the Australian power grid.  According to the assessment, SMR technology could be operational within seven-years if the country lifts the current moratorium on nuclear power.

Driven by the goals of energy independence and national security, on February 10, 2020, President Donald J. Trump unveiled the White House’s 2021 fiscal year budget, including $35.4 billion to fund the Department of Energy (DOE).  As part of that plan, the government has requested $3.1 billion to bolster innovation in renewables, fossil fuels, and nuclear energy.

Nuclear energy is one of the only major power resources that can provide huge amounts of carbon-free power to the grid within a relatively small footprint.  Nuclear power plants typically run well above 90% capacity factor, are available 24/7, and work well in extreme weather conditions.  For the country, states, local governments, and corporations to meet ever-increasing carbon-emission reduction goals, nuclear will need to be a large part of the solution.  With smaller lower-cost modular designs, nuclear appears well-positioned to play a key role in the growing market for carbon-free power.