Nuclear power can provide almost limitless economic, reliable, low carbon electricity to power the world, yet it continues to struggle to achieve the respect it so desperately seeks.  For 40 years we have been hearing the same thing – that for nuclear power to achieve its potential we must work harder on securing public acceptance.  This is seen as a one of the main impediments to future nuclear growth.  As technocrats, we often think that if we can just educate the public on the technology, they will see the light and come to accept us.  After years of effort and somewhat limited success, the time has come to refocus and set the bar even higher.  Let’s forget about trying to convince people to “accept” nuclear and strive to create true public enthusiasm for a technology that has the potential to solve the issues they care about most. 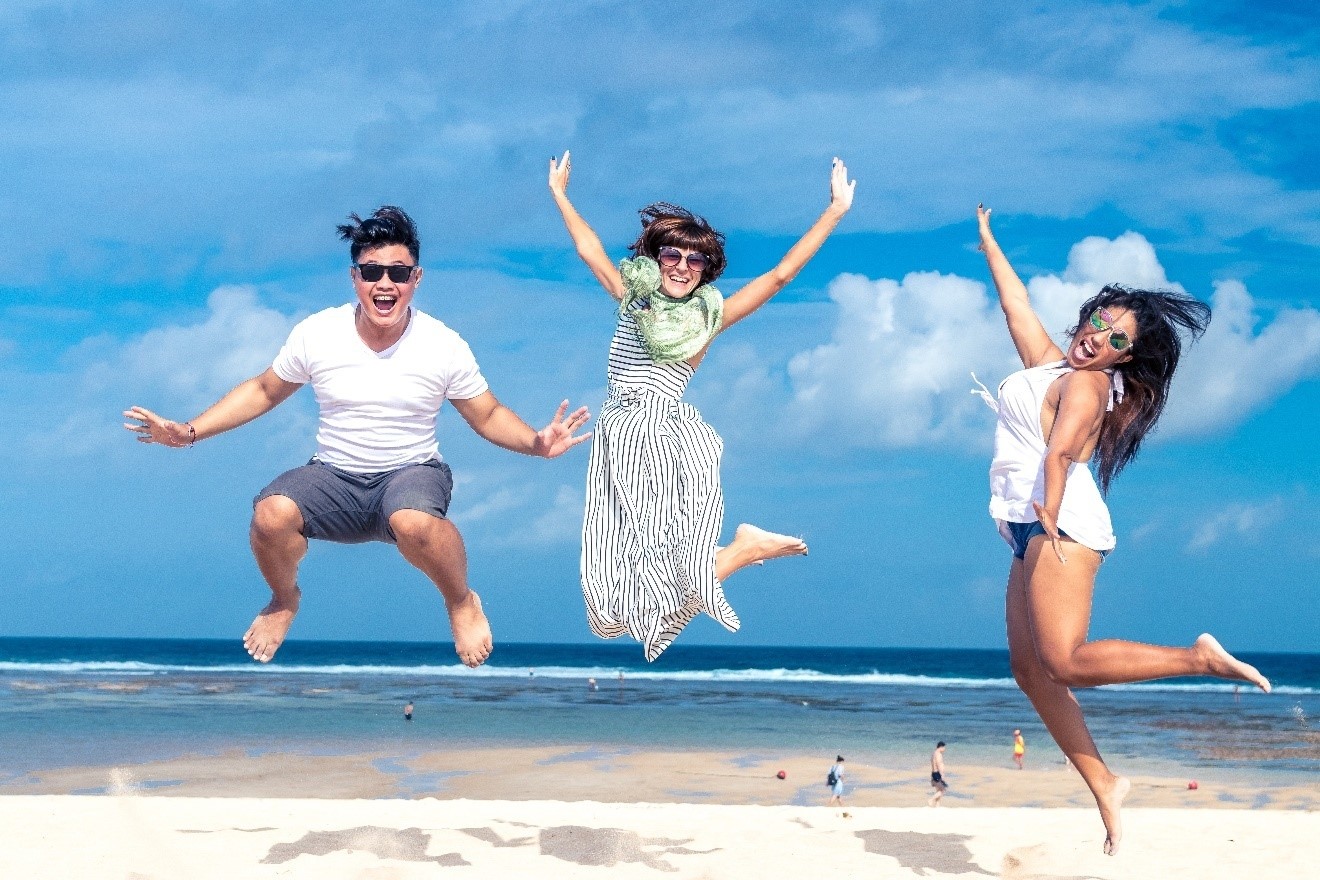 And we won’t get there until we focus on the right things.  After all, why should anyone even think about nuclear power, never mind come to love it?  It is definitely not by explaining all the reasons they shouldn’t worry about it; where it really starts is by having a clear understanding of the issues that are top of mind.

So, what are people concerned about? 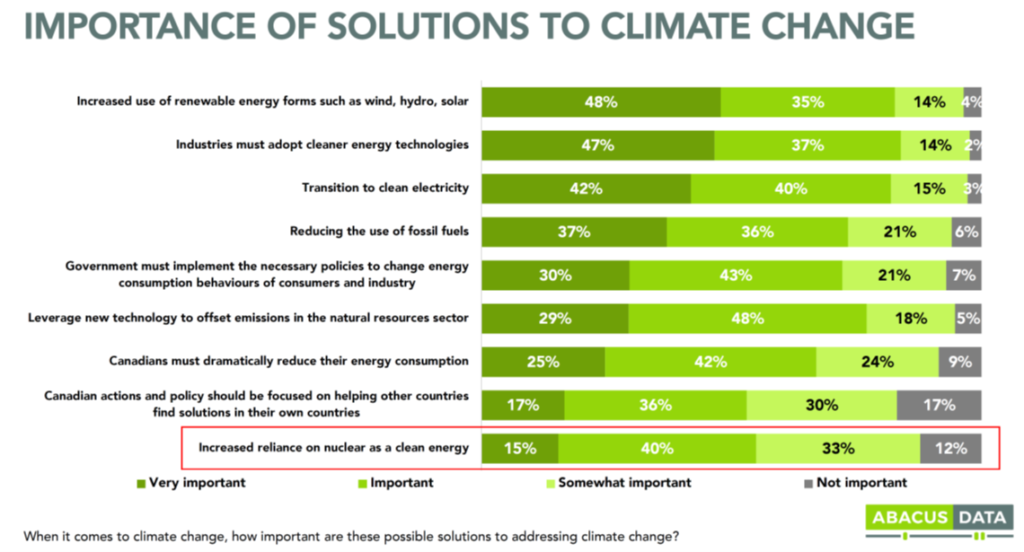 The challenge is that even with these concerns most people are completely unaware that nuclear power can be a solution.  68% of Canadians had no idea that nuclear power is the country’s second largest source of low carbon electricity (15% of total generation) after hydro power.  This is then re-enforced as nuclear is at the bottom of the list in solutions to solve climate change (although support remains strong).   Keep in mind that Canada is a very nuclear-friendly nation with more than 60% of the electricity in the province of Ontario and more than 30% in New Brunswick coming from nuclear.  So, it should be of no surprise this lack of awareness is not unique to Canada.  A similar recent poll in the US showed that nuclear power is a very unpopular form of electricity generation, second only to coal.  And even in the country with the most nuclear power in the world, France, most think nuclear contributes to, rather than is a solution to, climate change.

We first discussed how we need to take back the narrative from nuclear opponents in August of 2019.   The industry has been complicit (although well intentioned) by endlessly trying to defend nuclear by explaining ad nauseum how safe it is and why people shouldn’t be worried about nuclear waste.  This strategy has failed because the more time spent talking about why people shouldn’t worry about these things, the more they understand there must be something to worry about.  Rather, the priority should be on the important benefits nuclear brings – reliable, economic, low carbon electricity in vast quantities to fuel an energy hungry world – and the many high-quality jobs and the positive economic impact to communities that support nuclear power plants.  This is what can get people excited, and only then, will they be willing to have a discussion on those aspects of the technology where they have concerns.

And yes, we are making progress. It is becoming clear that renewables alone cannot fuel a decarbonized world and that nuclear power is an important option to help meet the energy needs of the future.  It has been recognized by global institutions like the International Energy Agency and most recently, Holland, with its single operating nuclear power plant, has joined the growing list of countries expressing interest in considering nuclear for the future.

Here in Canada, the Minister of Natural resources has been extremely clear – reaching net zero carbon emissions without nuclear is simply not feasible.

But this is not enough.  People love the idea of renewables and strongly support them as THE solution to climate change (although they may feel somewhat different when a wind project is promoted in their backyard – but that is another story.)  Many are eager to spend their hard-earned money to install solar panels on their roofs or buy electric vehicles even if they are expensive.  This is because they know they are doing good in the battle for the planet and they accept and support that these technologies are the future.

While it is common to express concerns with nuclear power such as asking about nuclear waste for example, these questions are never considered when talking about renewables.  Solar waste?  Low energy density land use?  Variable generation dependent upon resource availability requiring not yet available storage solutions, mining of rare earths and other needed minerals?  These are just silly questions that get in the way of environmental progress.   Smart people will solve all.  This is the strength of “knowing” that going down a given path is simply right.  We don’t want to hear about challenges for solutions we believe in, while we are happy to question those options we are suspicious of.

The world can only close its eyes to the truth for so long.  As more people start to accept that renewables cannot be the sole solution, support for nuclear is rising as its potential as a low carbon option is being better understood.  However, it is important that nuclear be considered because it is an excellent solution to climate change as well as providing reliable economic energy to society, not because the favoured options are falling short, forcing us consider this less desirable option of last resort.  Accepting nuclear should never be like taking your bad tasting medicine.  You accept it may be good for you, but you hold your nose while taking it and wish you didn’t have to.

And positive change is in the air.  We see many amazing groups, primarily a new generation of younger people who are making the positive case for nuclear power.  There are pronuclear demonstrations, funny videos explaining nuclear on YouTube and even a pro nuclear rap song.  If you are part of a group that is driving support for nuclear, please let us know in the comments below.

We live in a time where there are many that question technology with some causing more fear than others.  We are in a horrific pandemic yet fear of vaccines is making many worried about taking one when available.  There are even people who think 5G mobile technology is causing covid.  Therefore, after decades of anti-nuclear activism, it should come as no surprise that many are concerned about nuclear technology.  And while more and more environmentalists are now seeing the opportunity to fight climate change that nuclear brings, many are still fundamentally opposed.  Here in Canada, famed environmentalist David Suzuki said “I want to puke” in response to the Minister’s support for new nuclear.

We live in a time of both science skepticism and a lack of belief in facts.  But we should not be daunted as both the facts and the science are clear.  We have a great story to tell.  Nuclear power is AWESOME and can help to save the world.  So, let’s stop talking about public acceptance and all work together to generate a real sense of public enthusiasm to support this technology as a path to a better world where energy is economic, reliable, abundant and has little impact to the environment.

In the United States, many think nuclear energy is unethical and the Sunrise Movement, one of the largest and most influential climate and clean energy lobbies that came up with the Green New Deal, has refused to accept nuclear as a viable solution to in reaching clean power goals. Nuclear suffers from an optics problem and sentiment appears divided among generations.

That is indeed a huge hurdle-- but having that be the issue rather than a technical one can almost be an asset. If the issues were purely technical, it might be harder to overcome-- but if the issue is in perception, is that one where education and dialogue can overcome? I know it's quite contentious on both sides, so perhaps it's naive to think a resolution could come in due time, but it would be a shame to leave a potential key piece of climate solutions off the table

Wake me up when we actually starting seeing some growth in Nuclear generation - past its peak which was in 2006!

So far in 2020 - we have 2 constuction starts WW for Nuclear 3 reactors have shutdown.

Nuclear is barely running in place.