2020 has been a particularly difficult year for the United States (US) coal industry. Through the first eight months of 2020, driven by lower power demand caused by the pandemic and the continued closure of coal capacity, coal’s contribution to the overall fuel mix declined by 24%. During the period, coal’s share of US power production reached a record low of 18.6% (505.3 million MWh) of all fuels and generation resources. Meanwhile, for the first time ever, during the eight-month period, electricity production from the nation’s nuclear reactors (19.7%/533.2) was higher than coal power’s contribution – quite a change from one year ago, but to be expected given the lower power demand nationally. During the same eight-month period in 2019, coal accounted for 23.4% (664.3), while nuclear contributed 19.5% (544.1) to the total power supply. Natural gas accounted for a record 40.1% (1,108.9), and renewables, excluding hydroelectric power, represented 9.9% (268.0) of total output – up from the previous year and period, by 5.1% and 11.4% respectively.

Two events have happened in the fall that should help coal rebound. First, driven by a decline in shale-oil production that caused a reduction in associated shale-gas, natural gas prices have increased. Historically, markets have shifted dispatch toward coal when gas prices move upward. Just eight weeks ago, the five-workday average Henry Hub (HH) spot price, was below $1.65/mmBtu. Flash forward to last week, and the average HH price was $2.75/mmBtu – that’s a 66.7% increase in eight weeks. If that trend stays the same or increases, expect more coal in the mix. Second, expect coal to contribute more to the power production mix once the economy picks up again post-pandemic.

Just a decade ago, in 2010, coal was true ‘King’ of the power fuels in the US – powering nearly 45% of total generation – nearly twice that of natural gas (23.9%), and ten times that of non-hydro renewables (4%), including wind and solar power.

20% could be the new norm – that is still significant

Despite coal accounting for under 20% of electricity production in the US so far this year, it is expected to rebound modestly in 2021 but then decline steadily to around 14% by 2040 – this according to Hitachi ABB Power Grids’ Energy Market Advisors’ Fall 2020 North American Power Reference Case forecast. Driving coal’s contribution down further than 20% in the near-term, without a significant implementation of energy storage technologies for solving wind and solar power’s intermittency, would be difficult. For the past 20 years, nuclear baseload power has accounted for about 20% of the power supply. Wind and solar account for about 10% today, while conventional hydro varies, but averages between 7% and 8%. The abundant supply of low-priced natural gas is what most displaces coal in the energy mix. Since the first coal plant shuttered at the beginning of the twentieth century, there have been 119 GW in capacity retirements – 58.3% since 2015 alone. The pace of closure, though still relatively high, is slowing. Between now and 2023, an additional 24.3 GW of coal capacity are slated for closure.

Dominant coal supply region, a sign of the times

The Powder River Basin (PRB) is the most prolific coal-producing region in the country. Through the first three quarters of 2020, coal production at the PRB’s seventeen coal mines accounted for 44.1% of all coal produced in the US. Like most coal regions across the US, 2020 has seen decreased production.

Through the first three quarters of 2020, coal production in the PRB is down by 22.2% (-50.2 million tons), while total U.S. production was running 26.1% (-141 million tons) behind the same three-quarter reporting period in 2019. Despite the significant decline in production, the PRB fared better than most other producing regions. Coal production in Central Appalachia (-36.1%), the Illinois Basin (-35.1%), and Northern Appalachia (-29.6%) have been harder hit so far this year.

Most coal production in the Powder River Basin comes from the 12 mines in Wyoming (92.1%), with the remainder sourced to 5 mines in Montana (7.9%). The two largest coal mines in the United States reside in Wyoming, accounting for more than one-fifth (21.8%) of all production in the country through the first three quarters of reporting in 2020. Peabody Energy Corporation’s North Antelope Rochelle Complex (49.9 million tons) and Arch Coal’s Black Thunder mine (37.5 million tons) were the leading coal-producing mines during the period.

Coal production in PRB at a 22 year low

Not since 1997 has annual coal production in the PRB been so low. That year, mines in the basin produced 304.8 million tons. Within a decade, in 2008, coal production reached an all-time high of 496.1 million tons. Since then, annual production has declined at a compound average growth rate (CAGR) of 4.44%. When the 2020 statistics are finalized, that number will only decline further. But there is a silver lining to PRB’s recent declines. The economy will likely be stronger in 2021, natural gas prices, driven by a falloff in oil shale production and associated gas, have risen, and organized markets will continue to need fossil fuel, particularly during times of high load.

In terms of coal shipments to domestic power plants from the PRB, August represented the fourth month in a row where deliveries increased. Most of the coal produced in the PRB is delivered to power plants in the Southwest Power Pool (SPP), the Electric Reliability Council of Texas (ERCOT), and the Midcontinent Independent Service Organization (MISO) markets. Through the first eight months of 2020, delivered coal from the PRB to these three regions accounted for 75.2% of all basin deliveries, with MISO representing the largest market (55.4 million tons), and SPP (32.1) and ERCOT (21.5) following.

On a brighter note for coal, PRB’s three largest markets depend on it

The three largest organized power markets served by PRB mines use a balanced portfolio made up of a combination of dispatchable (coal, natural gas, nuclear), and intermittent (wind and solar) power to meet loads and maintain reliability. This is particularly true during high load periods. To better illuminate this, consider additional data compiled by the Hitachi ABB Power Grids' Velocity Suite research team. Looking only at hours when peak demand was 95% of the all-time ISO/RTO peak during the summer of 2020, coal and natural gas were large contributors to overall power demand.

In the SPP, which has by far the largest percentage of wind capacity (28%) contributing to the high peak hours, both coal (31%) and natural gas (34%) were also big contributors. Within ERCOT, wind accounted for only 12% of high load hours while natural gas (59%) and coal (18%) provided most of the power supply. And in MISO, the PRB’s largest market, coal (44%), natural gas (37%), and nuclear (11%), supplied most of the electric demand during the high peak hours.

Coal and natural gas play a large and necessary role during high peak periods. Reliability depends on a balanced fuel portfolio. When gas prices increase, coal power becomes more economic and tends to contribute more. In 2020, with power demand down across most regions in the country, with more available wind power in Texas and the central and midwestern states, and with nuclear running as baseload power like it always does, coal power declined substantially.

With an economic recovery and natural gas prices staying elevated, coal should rebound. The new normal for coal power might be 20% of the overall fuel mix. That is still, though considerably down from a decade ago, a substantial market share that is necessary to maintain reliability until there is adequate regional transmission, energy storage infrastructure, and possibly new technologies like green-hydrogen to work with the growing portfolios of wind and solar power.

The drop in coal has largely come from market forces-- do you think perhaps regulatory processes will be what kicks it, at least mostly, to the curb from here?

Matt, thanks for your comment.  I think the future for coal as a utility fuel depends on how rapidly new technologies are deployed that deal with the intermittency of wind and solar resources.  That is the sweet spot.  Great progress has been made growing wind and solar into the energy mix, but you need dispatchable resources to balance the load when there is high power demand combined with calm cloudy weeks, days, and hours.   Reliability is always the number one goal of power suppliers.  With the addition of successfully running energy storage technologies, the balance can rapidly shift toward renewables.  But until then, we need a balanced portfolio of resources and adequate transmission to keep the lights on 24/7 365 days of the year.  thx again for your comment.

I think a good way to think about this is to try and pick a state where coal might "survive"... and then come up with your reasons for justifying this.

Personally I don't see coal "surviving" anywhere in US after 2035 and it will be gone in most states by 2030.

Looking at the list below - I might pick West Virginia and Wyoming as two states where coal could hang around.

But even these two states have issues -

- both states export most of their coal generation and their neighbors can replace these exports with other sources.

Where else does coal stand a chance? 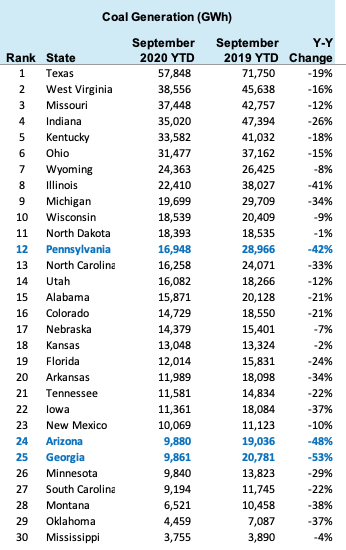