Who Turned Off The Lights?

When things get tight, it falls on the shift manager at the CAISO control room to decide what needs to be done. S/he usually does not have the luxury to consult with anyone, nor needs to seek anyone’s permission. If the available supply is deemed to be insufficient to meet the demand, some load must be shed, instantaneously, to avoid a cascading blackout – the worst-case scenario that all grid operators are keen to avoid at all cost. And that is what essentially happened on 14 and 15 Aug at CAISO. 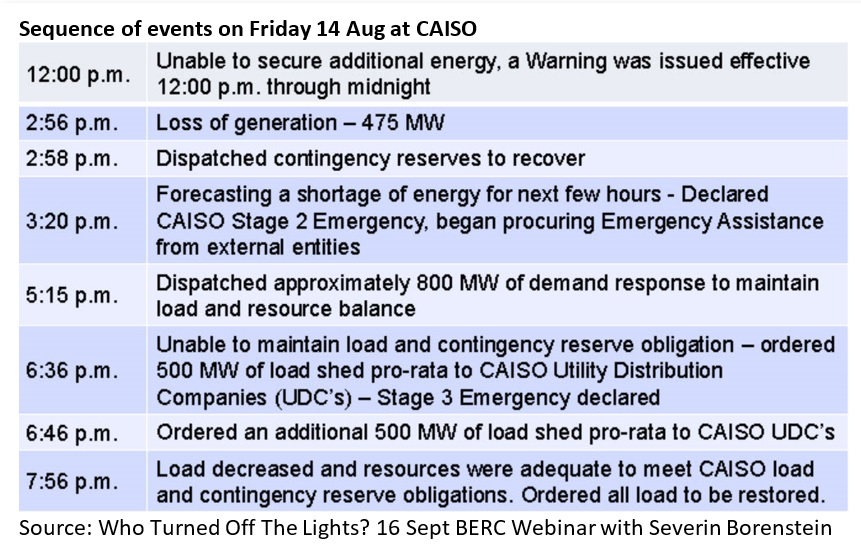 Speaking at a 16 Sept BERC webinar, Berkeley Prof. Severin Borenstein, who also happens to be a member of the board of Governors of CAISO, explained how on a hot day on 14 Aug CAISO ordered the utility distribution companies (UDCs) to shed 500 MW of load at 6:36 pm, followed by an additional 500 MW ten minutes later (table on right). This happened at a time when the demand on the CAISO network was around 45 GW. In other words, CAISO was short by 1,000 MW or roughly 2%.

By 7:56 pm, roughly an hour later, “Load decreased and resources were adequate to meet CAISO’s load and contingency reserve obligations” – at which point the UDCs were ordered to restore power to all customers.

But why was there a shortage of supplies in the first place?

While the details are still under investigation, preliminary data from CAISO suggests that the culprits were not variable renewables but the sudden loss of 475 MW of generation at a supposedly dependable fossil fuel plant that got CAISO into an unexpected bind. On 15 Aug, human error was apparently the cause of the shortage – an operator erroneously reduced output by 400 MW rather than increasing it. In neither case can renewables be blamed for shortages based on what is presently known.

Boresntein points out that the episode, while serious, could have been far worse. Moreover, as the climate gets warmer and summers get drier and longer, CAISO will face tight supplies in the future. The list of solutions, immediate and longer-term, include the usual suspects. 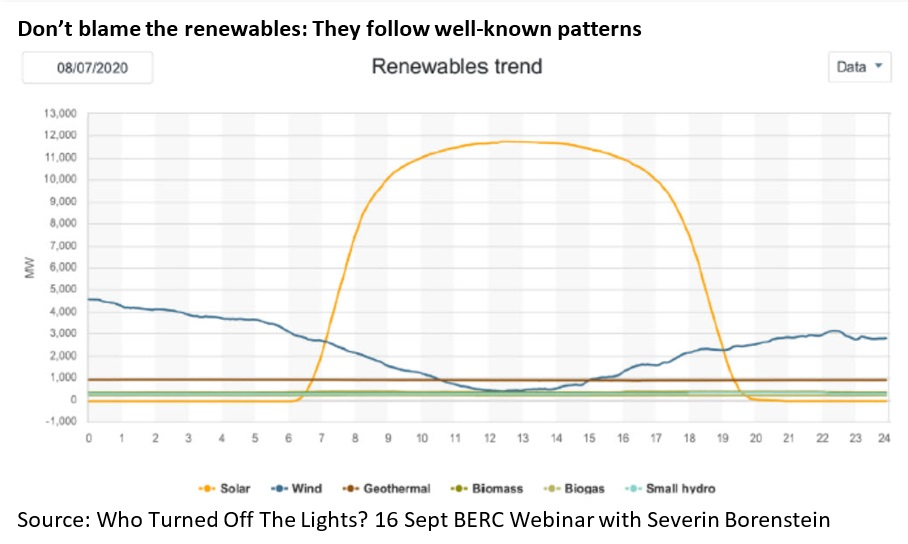 Most important, is what is at stake. Had CAISO experienced a widespread blackout, the repercussions would have been severe and not just for California but the future of renewables worldwide. The California power shortages of 2000-01 derailed plans to introduce retail competition across the US. A similar, or worse, could happen to renewables if the lights go out again.

This article originally appeared in the September 2020 issue of EEnergy Informer, a monthly newsletter edited by Fereidoon Sioshansi who may be reached at fpsioshansi@aol.com"

I have the log of outages provided by Cal-ISO for Sept. 14.  Why do you and Borenstein fail to report that there was 1,098 mW of wind power lost from the Alta Wind Farm in Tehachapi at a critical time, as reported widely by news media?  I am surprised at Borenstein's failure to report this given his stature and excellent analysis that the public depends on.

I have the log of outages provided by Cal-ISO for Sept. 14.

The analysis above is dealing with August 14-- did you misspeak when you said this Alta Wind Farm outage happened on Sept 14 and you meant August 14 or are you perhaps looking at the wrong day? Would love to also see a link to this log to further the discussion!

Wayne, the "loss of generation" at 2:56PM at a 475MW gas plant in San Diego was due to low gas pressure. Not enough gas where it was needed most.