Posted to Energy Central in the Load Management Group For decades, utilities have been using demand response programs as a way to eliminate or shift energy demand away from peak hours as a strategy to ensure supply did not get overstretched. This paradigm of demand response (DR) has been somewhat successful to manage energy loads, but it’s also been somewhat stagnant. But the possibility for load shifting and engaging customers in this process has always been immense, and arguably underutilized in the utility industry.

Recognizing the opportunity to transform the DR space, Pacific Gas and Electric Company (PG&E) teamed up with Olivine to create the PG&E Excess Supply Demand Response Program (XSP). This multi-year pilot initiative demonstrated the capabilities of DR resources to not only decrease power load but also consume energy, both acting as a service of the grid in a way that addresses the intermittency of an energy mix increasingly powered by renewable sources. As solar and wind make up a greater portion of the grid’s supply, those resources’ inherent intermittent nature present challenges of lining up supply with demand, as peak renewable generation comes during the middle of the day while peak demand hours are later in the early evening.

The main goal of XSP was to investigate and prove the ability of both residential and non-residential (e.g. commercial, industrial, agricultural) customers to help in times of excess supply to increase energy usage when doing so would be beneficial to the grid. Designed to capture the full potential grid-tied resources available across PG&E customers, the XSP framework has been utilized by various other programs, such as the California Energy Commission EPIC Total Charge Management project, PG&E’s Electric Vehicle Charge Network Load Management Plan, and the Pittsburg USD School Bus Renewables Integration Project. Using PG&E excess-supply forecasts, 221 of the dispatched hours in 2018 aligned with CAISO’s reported renewable curtailment hours for 385 MW of consumption, working out for average XSP participants to receive eight dispatches per month.

The XSP pilot was recognized by the California PUC Load Shifting Working Group as the only existing load shifting participation. This unique initiative was also awarded by PLMA as a Program Pacesetter, honoring innovative solutions and outstanding programs that effectively support and deliver peak load management (for other profiles of other PLMA award winners on Energy Central, see interviews with C+C, Efficiency Vermont, Eversource, and Viking Cold Solutions). As a part of this award, PLMA hosted a recent webinar with Jonathan Burrows, Program Manager at PG&E, and Elizabeth Reid, CEO of Olivine, to discuss the success and future of the program. The PG&E Excess Supply Demand Response Program was also one of the hot topics of discussion at the recent OpenADR Symposium that took place in mid-June in San Francisco.

During the PLMA webinar, the analogy was made that PG&E’s XSP represented a long-awaited evolution away from DR 1.0. Burrows agreed, noting:

In California, we’ve had a long history of offering load management programs, going back to PG&E’s first load management program in 1959 that had one or two customers. Traditionally, they’ve been designed for summer peaking load reduction or for emergency conditions. However, the development and growth of intermittent renewable energy sources and the retirement of traditional power plants are presenting a lot of new operational challenges for the grid. Additionally, customers have become much more savvy and are able to control their loads and are rightly looking to benefit from that.

Burrows goes on to explain the myriad of factors that are making a program to soak up excess supply feasible, especially in California. The continually built renewables and the lack of AC cooling in spring and winter, while solar is still generating in large numbers, creates a situation where there’s not enough load to absorb all the renewables. Given the current situation, with limited energy storage solutions installed, the result is too often an energy imbalance market where the excess supply must be exported out of state, driving prices down as people are being paid to increase their energy. The intent of the XSP pilot is to demonstrate how customers can now, and in the future, utilize technology to receive direct benefits from their ability to shift loads to these times of negative wholesale prices. Asked how customers are actually compensated in this pilot, Burrows described:

In this program, at this point, there’s no mechanism for behind the meter resources. So, for customers to directly bid load increase into the wholesale market, customers give us times when they are available to shift or increase their load, certain hours of the day. We then look at the day-ahead energy prices and, based on our modeling, if it looks like the real-time energy price would be negative we would call them and give them a dispatch for those hours...Right now there’s no energy payment for increasing loads in DR, but we give them a payment for participation, much like other DR programs. We give them a payment per kW that they can dispatch. That’s how we compensate until we have a mechanism in place for them to directly benefit from the energy pricing in the wholesale market. 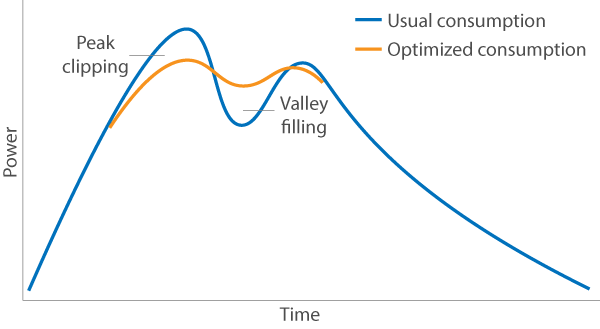 The moderator of the webinar asked Reid what Olivine’s role was, who noted that the partnership on this pilot has been going on for a number of years as PG&E and Olivine have been jointly committed to solving the problem at hand. “It’s not just technology, but it’s also regulatory, it’s figuring out roles,” she noted. Olivine operates essentially as the super aggregator of the XSP program, processing payments, offering the system for customers to use, sending the event signals, handling enrollments and registrations, and basically making the program work so that customers experience as close to possible what they would if they were actually interacting with the wholesale market.

One of the keys to success that Reid also noted was that the XSP operates wholly technology agnostic. While reduction of greenhouse gases is one of the downstream effects of these types of DR programs, emissions reductions are not measurement of program success. Reid described that “We are technology agnostic, but in reality not every technology can do this.” Burrow agreed, noting that “What we’ve found so far is participants have been able to respond to excess supply events. That was a big question to be answered by the pilot, and we’ve had a variety of customers with varying technologies who have been able to respond to the program.” That wide-ranging number of technologies is one of the drivers of success thus far. Reid told webinar listeners:

And we’re looking to be as technology neutral as possible-- there’s PV, energy storage, thermal storage, process shifting, lots of disabling backup generation, and we actually have quite a bit of electric vehicle aggregation as well. This is how we work with other programs and pilots to reduce costs and test out capabilities with this design.