In the late 2000’s the Canadian province of Ontario became a world leader in smart electric rate design by moving all residential and small business customers to a default time-of-use (TOU) electricity rate. Enabled by newly installed smart meters that recorded real-time electricity usage across the day, this was a global first.

TOU rates reflect the underlying costs of the electricity system by showing that in peak periods, when everyone is using the grid, electricity is more expensive to produce. By shifting some consumption to the cheaper off-peak period, customers can save money off their bill while lowering electricity costs for everyone else. There is empirical evidence Ontarians have adjusted their energy use patterns in response to the incentives provided by the rate design. We carried out an econometric analysis over a three year period and found that provincial peak demand had declined by 2% to 3% due to the TOU rates.

The regulated TOU rates had replaced a regulated inclining block rate (IBR) structure. Originally put in place with the intention to promote energy conservation, IBRs charge a higher rate as you use more electricity. Studies have shown that they did not achieve that objective because customers found it difficult to know which tier they were in until the month had passed. For all practical purpose, they were simply responding to the total bill or to the average price of electricity. Following Ontario’s lead in moving to smarter pricing, many North American states are ditching IBR in favor of default TOU. California, Colorado and Michigan are already in the process of moving to default TOU rates. Other provinces and states are giving TOU rates serious consideration.

When the pandemic broke out earlier this year, customers were forced to work from home. In an effort to ease the financial burden on customers, in March Premier Doug Ford set the regulated price of electricity equal to the off-peak rate of 10.1 cents/kWh across all three pricing period. This effectively gave every customer a sizeable bill discount. It is estimated this cost the provincial treasury $175 million.

The premier, never a fan of TOU rates, announced recently that the flat discounted rate would be raised to 12.8 cents per kWh on June 1st. It would stay in effect through the end of October. On November 1, the regulated TOU rate would return but customers would also be able to opt-out to a new regulated inclining block rate to be developed by the Ontario Energy Board.

In our opinion, this is a step backward. While it’s a good idea to offer rate design alternatives in Ontario, IBRs are not the best way to go for the reasons discussed earlier. Rather, tariff choices should be developed that help lower customer bills and also help create the grid of tomorrow by  enabling the faster deployment of clean new technologies such as electric vehicles, rooftop solar and home batteries. Flexible rates that dynamically reflect electricity costs will help integrate these new technologies and lower their costs of ownership. For example, an electric vehicle on a smart tariff can be charged when electricity is cheap and be discharged to sell electricity back to the grid when prices spike. Utilities in Ontario have already tested dynamic pricing and found significant customer acceptance and response.

Rather than moving the clock back in time, we believe that the province should offer a menu of rate options that include dynamic pricing, several alternative TOU designs, and a fixed bill subscription service. Dynamic pricing rates such as critical-peak pricing, variable peak pricing, real time pricing and peak time rebates give customers who can respond flexibly to price signals an opportunity to lower their bills. As digital technology advances, dynamic pricing will appeal to a larger set of customers since prices will get transmitted to devices, enabling automation of price response. Alternative TOU rates can also be offered to appeal to more population segments by varying the magnitude of price differentials across the periods, the length of the peak period, and number of pricing periods. Finally, for customers who have an inherent predisposition against time-varying rates, a subscription plan in the form of a fixed bill could be offered.

Such options would provide different combinations of risk and reward, as shown in the figure below, and constitute efficient choices that maximize customer wellbeing while meeting the province’s overall energy objectives. 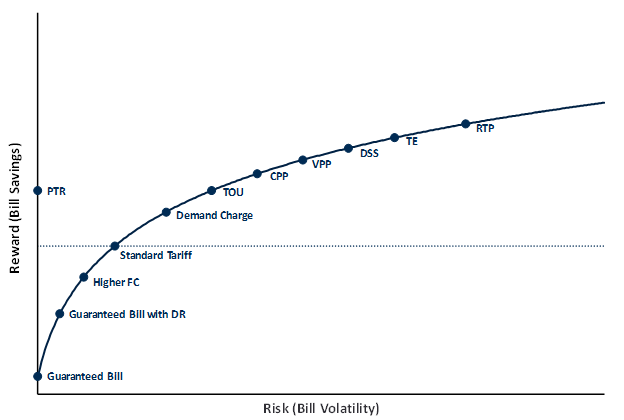 If it at some point it is felt necessary to enhance energy affordability to vulnerable customer segments, that should be done through bill credits or through the tax code, rather than by distorting the price signal.

The authors are energy economists with many years of designing and evaluating rate designs in jurisdictions around the globe, including Ontario.

We carried out an econometric analysis over a three year period and found that provincial peak demand had declined by 2% to 3% due to the TOU rates.

Can you comment on what that scope of the tangible impact of this type of peak reduction had on the utility industry, the health of the grid, and the benefits customers would reap?

Rather than moving the clock back in time, we believe that the province should offer a menu of rate options that include dynamic pricing, several alternative TOU designs, and a fixed bill subscription service

I like this idea-- it seems to attack a lot of the concerns people might have about TOU rates about people being forced into different arrangements. If everyone is able to pick the rate structure that works best for them, I would have to imagine some natural efficiencies would uncover themselves.

What do will happen if we see this temporary move to a more dispersersed workforce become permenant? It doesn't seem so far fetched at this point: Some big tech companies have announced that they'll make working from home an option going forward, and everyone I know is raving about the quality of life/productivity boost they've witnnesed. Obviously utilities couldn't be expected to keep the rates low forever, but would the subscription model make most sense for a home worker?