Back in 2012, when the California Independent System Operator (CAISO) projected the likely evolution of its net load to the year 2020 – the famous California “Duck Curve” – it saw a disturbing pattern getting progressively worse, year after year. By 2020, the net load was projected to dip too low during the sunny mid-day hours leading to a host of issues including over-generation, minimum load and negative prices. Even more alarming was the ramping requirements in the morning and evening as the sun would rise and set. CAISO said its evening ramp might be as high as 13 GW during a 3-hour period at the end of the day. The problem would be worse in sunny spring days when the temperatures are moderate, hence no air conditioning load.

As has been reported in this newsletter and elsewhere, CAISO management went on high alert – so to speak – informing its board, the press, the governor, the regulators, the energy commission, the utilities and anyone else it could find that quite a few things had to be done before it was too late. And quite a few things have, in fact, been done already with more in the pipeline. Among the early actions was an Oct 2013 mandate by the California Public Utilities Commission (CPUC) for a mandatory 1,325 MW of storage by 2020, with targets increasing every 2 years between 2016 and 2020. Since then, an additional 4 laws have been passed to increase and help reach this initial goal. 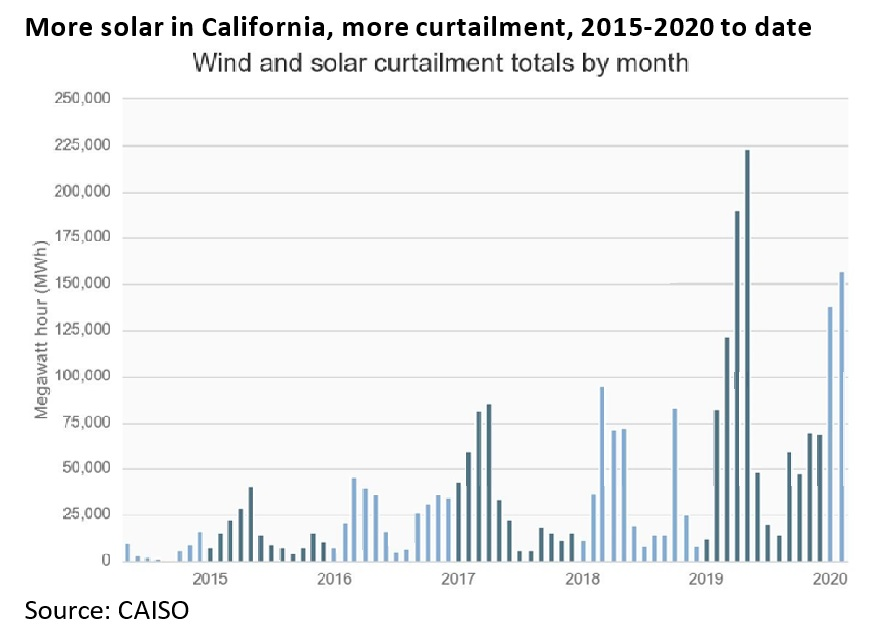 2020, of course, has arrived and it turns out that CAISO was in fact conservative when it first rang the alarm bells. The projected minimum load arrived by 2016 – 4 years early – and the evening ramp was already approaching 16 GW in Jan 2019 – nearly 3 GW higher than the original 13 GW estimate for 2020.

On a typical sunny winter day – we have many of those in the Golden State – the CAISO begins its evening ramp up around 2:30 pm – since winter days are short. As illustrated in the graph below, the solar component vanishes as the sun sets and is replaced by natural gas fired plants and increased imports from out of state. The revers happens during the ramp-down in the morning. 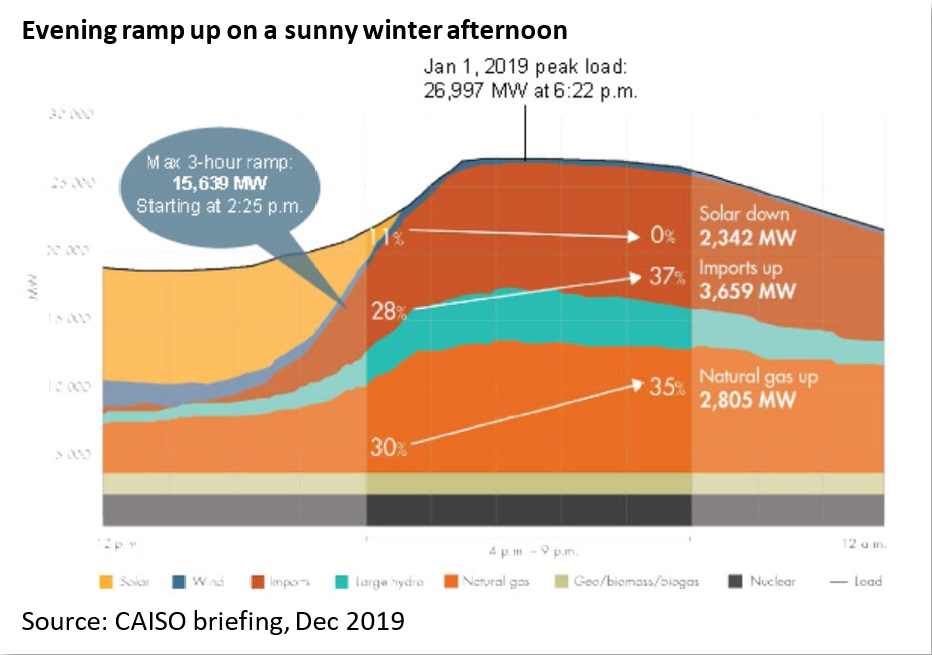 By 2030, assuming California does not alter its current ambitious renewable targets, the evening ramp could be as high as 25 GW, according to a Dec 2019 updated CAISO study (chart on next page).

There is an old saying that plans are good until they meet the enemy. And the enemy has arrived in the form of a pandemic that has reduced demand without affecting solar generation. On a cool sunny Saturday on 11 April, the CAISO recorded its lowest hourly load in the last decade during a 5-minute interval around 2:20 pm at 15,410 MW. Minimum load is a growing concern as CAISO originally predicted in 2012. 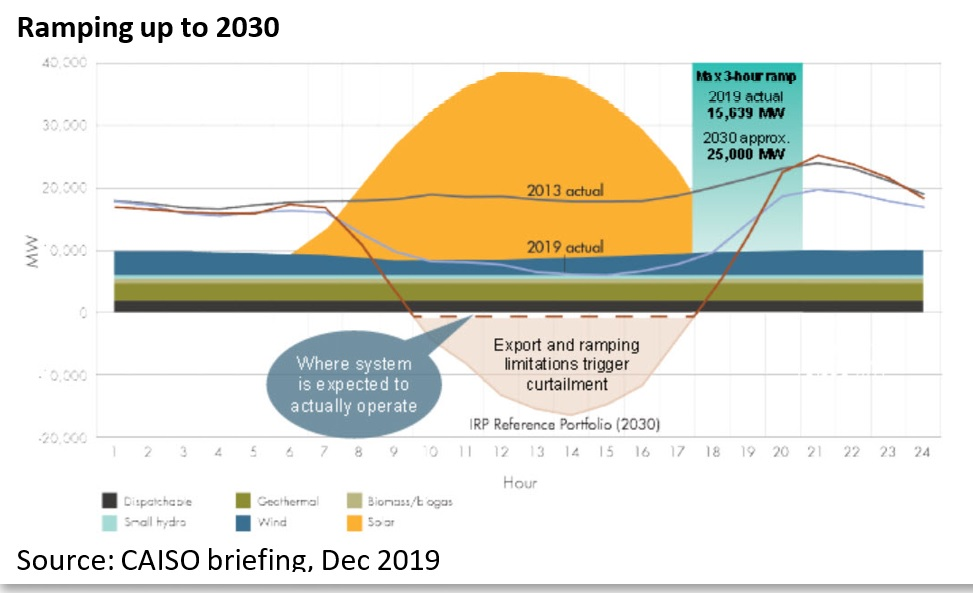 The increased solar generation, mostly utility-scale but also from rooftops, has increased both the frequency and amount of renewable curtailments (Fig on middle of page 8). For the first quarter of 2020, renewable curtailments were double the comparable quarter in 2019. The problem is most acute in the spring. In the spring of 2019 an average of 5 GWhs were curtailed per day. There is not enough load, not enough out of state demand, or transmission capacity and certainly not enough storage (see articles on page 16 and 17) or demand response to absorb the excess generation.

Some observers – especially those who don’t like renewables to begin with – get overly alarmed making noises about the wasted renewable energy, for which California customers are paying in higher rates. Nobody likes to dump carbon-free solar energy if it could be avoided – just as nobody wants to spill the overflow behind a full hydro reservoir – but that is what has to be done when there is too much of it.

Another sunny day in the life of CAISO 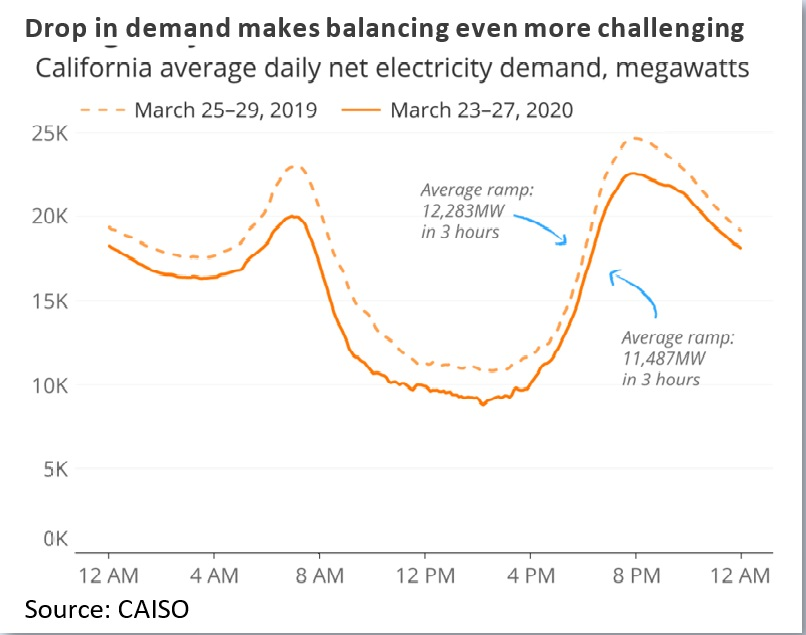 CAISO said renewable curtailments, which were already high before the pandemic, could go even higher due to the lower demand. CAISO curtailed 138,000 MWhs of wind and solar in January of this year and 157,000 MWhs in February compared to 12,700 and 82,600 MWhs, respectively, in the same months in 2019. California had over 27.4 GW of solar and 6 GW of installed wind capacity at the end of 2019 with the former accounting for roughly 20% of the state’s annual electricity demand.Electricity demand, like demand for most things, took a beating around the world starting in March and continuing through April and May. In California, the grid operator CAISO reported 9% reductions on weekdays, less on weekends, adjusted for weather, in late March compared to 2019 (Figure). It also noticed a significant drop in the commercial sector and a rise in residential consumption, not surprising. Other grid operators in the US and elsewhere reported similar shifts – lower commercial, higher residential – and even lager drops in overall demand.

With so much solar on sunny days, day-ahead price signals encourage generators who can control their output, to ramp down production as much as they can. If that fails, CAISO begins to offer "decremental" bids – essentially paying thermal generators with flexibility to reduce output. On most occasions, this is sufficient to balance supply and demand. As of the end of March 2020, CAISO had ordered 10,632 MWhs of self-scheduling cuts. If that fails, however, CAISO reduces generators’ self-scheduled deliveries, essentially forcing them to go offline. The technical term is “exceptional dispatch” orders – something it does rarely. Nobody, especially CAISO, wants to curtail renewables if it can be avoided.

According to another overused adage, problems generally get a lot worse before they get better. The minimum load, over-generation, renewable curtailment and negative wholesale prices are relatively new problems. They have been gradually brewing and getting more problematic. And it would take time, ingenuity and investment to find solutions. Energy storage – both short and long-duration -- is an obvious option as is more flexible demand and expanded markets for importing and exporting to the neighboring states. There are indications that solutions are being found.

By 2030, when CAISO expects an evening ramp of 25 GWs, California is projected to have as many as 5 million electric vehicles (EVs). Before the pandemic stuck and people began putting off buying any cars – there were projections of as many as 7 million EVs by 2030. What ever the actual number turns out to be, millions of EVs could amount to – by some estimates – as much as 13 GW of storage capacity paid for by EV owners, not CAISO, utilities or their customers.

How much can actually be stored in 5 million EVs – or what ever the number turns out to be – during the sunny hours of the day and how much of this may be discharged during the peak demand hours, is subject to interpretation. But at least conceptually, the evening’s ramp up can be cut roughly in half. This, of course, is highly speculative for now and will depend on the so-called vehicle-to-grid (V2G) technology. Likewise, other practical load shifting schemes, once developed and implemented, will also help, making the evening’s ramp up less daunting that it now appears.

After issuing an Executive Order in 2018 for a carbon neutral economy by 2045, the former California Governor Jerry Brown was asked by a reporter why he was setting such an ambitious target. Brown thought for a minute and replied (paraphrasing), “We do these things not because they are easy, but because they are hard.” Time, as always, is of the essence but this editor is hopeful that California will prevail once it sets its mind to it.

Curtailment is so frustrating to see-- I wonder if this will provide further drive to invest in technology to prevent it, whether storage, hydrogen, or something else

In California's real time energy imbalance market, utility solar plants are paid for the "service" of turning off their own plants - based on how much electricity they're not providing (really). What would be the incentive to invest in technology to prevent it when they're being paid for it?

Known as "decremental energy", aka "energy that's less than useless",  these payments are a perfect example of the obscene, twisted fascination with renewables here. Electricity customers get nothing of value for their money, other than preventing a problem they've paid to create.

Renewables developers have no interest in preventing carbon emissions - it's all about soaking ratepayers for every penny they can.

Very informative posting. With regard to the 25GW ramping requirement; do you foresee a market solution to acquire these resources/essential grid services for capacity?

Fereidoon, maybe there is no cost-effective solution for making intermittent renewables deliver consistent power. Maybe grid-scale batteries will remain hopelessly impractical. Maybe requiring EV owners to sacrifice their mobility, or forcing customers to use electricity at prescribed times, are as ridiculous as they sound.

What then? Maybe we'll need to look at carbon-free alternatives that don't either 1) deliver intermittent electricity, or 2) ensure dependence on fossil fuels.

A rotten choice to have to make, is it not?