Human knowledge of exotic animal architecture is nothing new. Almost everyone is familiar with how bees create beautiful beehives, and a significant portion of us also know that ant colonies can create truly remarkable tunnelling (see below). But if you’ve ever encountered termites (especially the results of termites), you probably weren’t left with a good impression; in fact, most people only know them for their destructive abilities. The dastardly little critters are, when taken collectively, relentless eating machines. If you only know one thing about termites, it’s probably their uncanny ability to devour wood.

Above: The beautiful and amazing architecture of an ant colony being carefully excavated.

But if this is all you know about termites, you’re in for a pleasant surprise. Termites have solved a mystery that thousands of years of civilized society never could: building energy-efficient buildings by design alone. 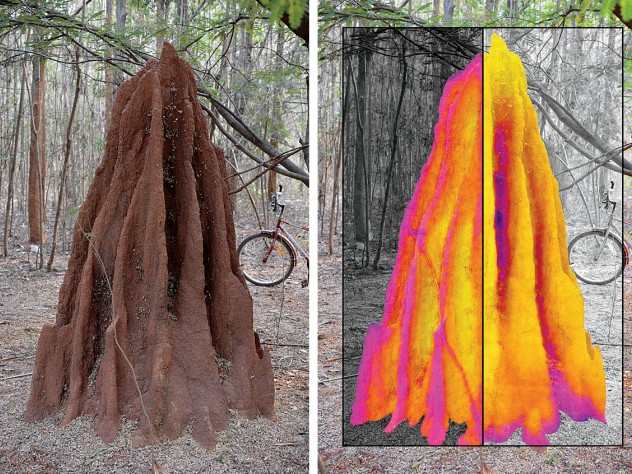 Above: On the left side is the exterior of a termite mound; on the right is a thermal image showing temperatures for both night (left bisection) and day (right bisection).

Back in the 1960s, it was believed that termite mounds were created as a sort of air conditioner. This is a very reasonable conjecture, but it also seems to be wrong (thanks to recent studies). Another proposal was that it was intended to keep predators away.

However, SUNY biology professor J. Scott Turner spent years of his life researching the inner workings of termite mounds—pumping mounds with tracer gas, scanning them with lasers, and even filling them with plaster. After the research was conducted, the hypothesis was that the mound “manipulates external wind and the transient energy in its turbulence via intricate internal tunnels that ‘sloshed’ fresh air in,” according to researchers.

But here’s the kicker: the mounds have been compared to human lungs, and researchers have speculated that millions of years of natural selection have selected for termite colonies that can most effectively ventilate their habitats, and this kind of architecture could also be incorporated into human design. One of the biggest energy wastes right now is due to buildings being poorly ventilated. Constantly pumping in massive amounts of hot or cool air can be a real drain on the power grid (and the bank account).

What staggers me most about termite mounds is the complexity and efficiency that is ostensibly created by what amounts to a bunch of mindless insects each assigned to do a simple job while simultaneously creating mind-blowing structures. When a human building team creates a comparatively large structure—say, the Sydney Harbour Bridge—we have to hire architects, make blueprints, consult with design firms. With the aforementioned bridge project, it took 1,400 men eight years to complete. An entire colony of termites maxes out at about 4,800—and termites top out at half an inch in length. They did this all, like ants, by following a simple directive that maximises their chance of colony survival. Therefore, the next time you think about termites, you can now appreciate their incredible building ability, not just their appetite for destruction.