The term rebound is used to describe effects which prevent the potential savings resulting from efficiency increases from being realized (at all or in full). Ideally, we expect efficiency measures to result in corresponding savings. However, the greater the difference between expected and actual savings, the greater the rebound effect. In some cases, an increase in efficiency may even lead to increased energy consumption. If an increase in energy consumption which is independent of the efficiency gains mitigates the efficiency gains, there is no rebound.

The rebound effect is the percentage of the theoretical savings potential of efficiency increases which cannot be saved due to consumer behaviour.

For example, a 20 % increase in efficiency is expected to yield a 20 % decrease in resource consumption. However, if this only falls by 10 %, the rebound effect is 50 %.

A direct rebound is an increased demand for the same good. Energy services which are provided more efficiently are thus cheaper. The cheaper the service, the greater the demand. For example, a more efficient lamp saves energy, (some of) which is then used for longer lighting periods (e.g. at night).

All those who save energy and therefore money due to increased efficiency, will spend the money on other things that also consume energy. This raises the demand for additional products that also require energy for their production, operation and disposal. For example, petrol will be saved after purchasing an efficient car. The money from this saving can then be used to book a flight. 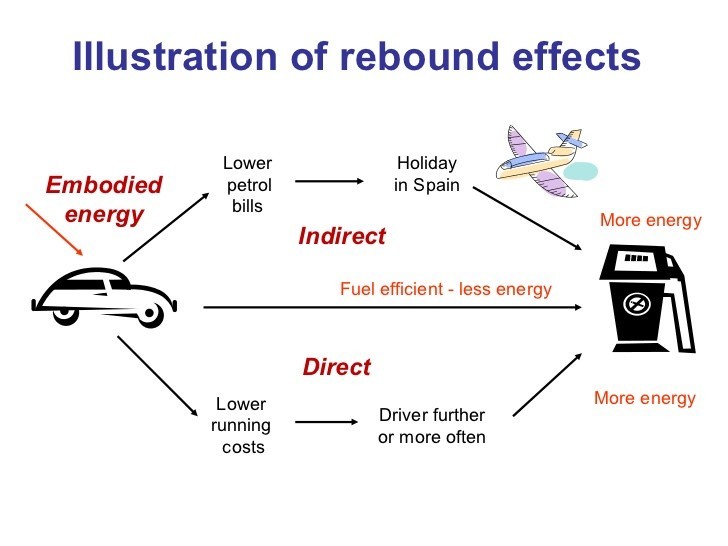 The energy saved is then available as additional supply on the (global) market. Additional supply redu­ces the price, which in turn stimulates demand. In other words: what one person saves is consumed by another. Therefore, less energy is saved overall than was expected as the result of the efficiency. This includes both direct and indirect rebound effects.

What appears to be quite reasonable in terms of personal finances can have an enormously magnified effect on an economy consisting of millions of people. The rebound effect therefore has to be taken into consideration in the energy transition and the associated increase in energy efficiency.

It is certainly not an option to use the rebound effect as justification for ignoring energy efficiency. Instead, the goal should be to make conscious savings and to take targeted advantage of the opportu­nities yielded by energy efficiency.

In the literature, it is assumed that the rebound effect will reduce the energy savings obtained through energy efficiency measures by an average of 10 %, although the results of individual studies vary bet­ween 0 and 30 %.

The rebound effect is a very real and very critical aspect of energy efficiency measures to take into account, thanks for highlighting it. One area where I see it happen a lot is with any IoT or smart device intended to increase home efficiency-- people feel that making that 'green' choice gives them leeway to be more energy-wasteful in other aspects. Education and follow through is so critical