Long lead times for nuclear projects mean that projects which started construction in 2020 will be completed in the second half of the decade. Based on this, we have a good idea of what WW nuclear capacity will be in the late 2020s and can infer any growth in generation.

Here is information on new nuclear construction starts, as well as new connections to grid and shutdowns in 2020 from International Atomic Energy Agency (IAEA) PRIS database. 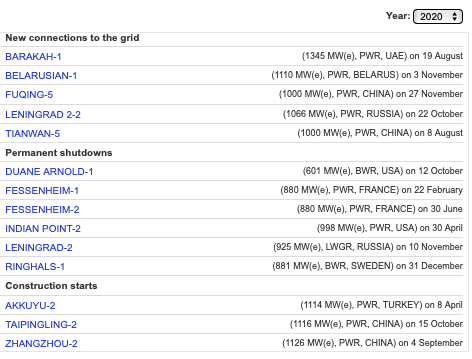 Nuclear generation peaked WW in 2006 at 2660 TWh- see below. Basically there has been no growth since then. Early indications for 2020 show declines in generation for the US, France, UK and Sweden which indicate that WW nuclear generation will almost certainly decline for the year. Hopefully at some point in this decade we will get past this earlier peak. However, it's not gonna happen in 2020.

It looks like for the 2020s the world is gonna have to depend on renewables to increase the amount of zero carbon generation WW. 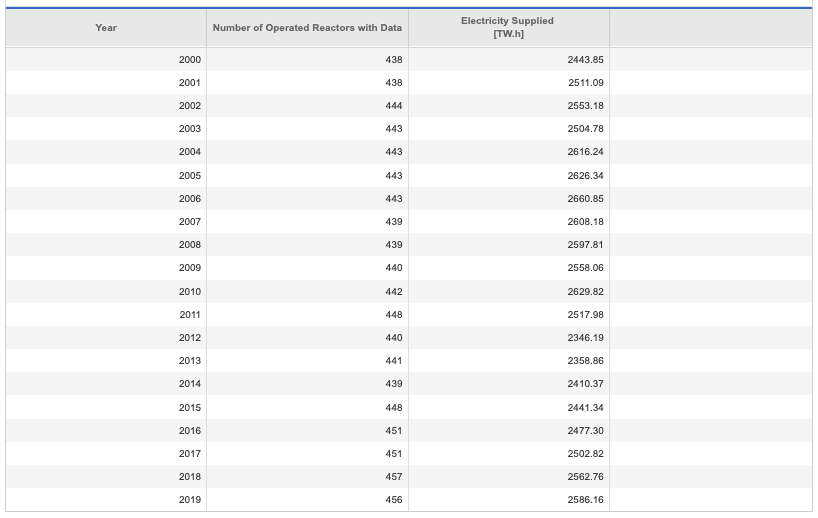 Do you think the lack of new builds will increase the likelihood that existing reactors get extended licenses to keep providing power to the grid?

It's already happening, Matt, and uprates too. Even with nuclear plant closures, in 2019 U.S. nuclear plants generated 809 trillion watthours of clean electricity - a record.

And it's not just uprates. Two days ago, The Nuclear Regulatory Commission issued an Environmental Assessment (EA) and Finding of No Significant Impact (FONSI) extending the completion dates for the Tennessee Valley Authority’s Bellefonte plant reactor construction permits. After decades of spurious lawsuits, new nuclear is coming to Alabama - whether anti-nuclear activists like it, or not.

It looks like sometime during the 2020s those fearful activists are gonna hafta accept that zero-carbon nuclear energy is here to stay.

This is not progress. Uranium is a limited resource. 90% comes from Russia and adding new Reactors just makes it run out faster and take even more subsidies. Nuclear is already the biggest Subsidy and most expensive power ever made.

None of the tons of deadly waste stored at each reactor has been processed and stored safely.  I should know we live near the triple reactor aging Nuclear plant in Phoenix Arizona. It uses 60 million gallon of water a day that could be used for people and farming.

I thought uranium had a pretty long supply (at least compared to fossil fuels), but I'm surprised that it's more limited than I thought. From the World Nuclear Association:

The world's present measured resources of uranium (6.1 Mt) in the cost category less than three times present spot prices and used only in conventional reactors, are enough to last for about 90 years. This represents a higher level of assured resources than is normal for most minerals. Further exploration and higher prices will certainly, on the basis of present geological knowledge, yield further resources as present ones are used up.

"Uranium is a limited resource. 90% comes from Russia..."

Jim, please stop posting this misinformation. As of 2019, U.S. uranium came from these countries:

We have many sources from around the world, and a virtually unlimited supply.

If you have more accurate information from another source, I'd love to see it. But your tired anti-nuclear talking points don't cut it anymore.