The World Energy Outlook (WEO) 2020 at a glance

In October 2020, the International Energy Agency (IEA) published its annual flagship, the World Energy Outlook (WEO) 2020. Analysts and politicians observe and use the IEA’s scenarios as an outlook on the energy market of tomorrow. Read more about the main themes and aspects of this year’s WEO in our series. In the first article, we put the WEO 2020 into context and explain the most important findings.

In its annual WEO, the IEA models the long-term developments on the global commodity and energy markets up to 2070. This year’s WEO focuses on the next decade. In particular, the effects of the COVID-19 pandemic on the energy sector are examined in more detail. Particularly in this year, the WEO 2020 contains four scenarios.

Their respective characteristics are briefly summarised below:

Figure 1 shows the course of CO2-emissions from energy use and industry and different reduction levers for three scenarios until 2030. 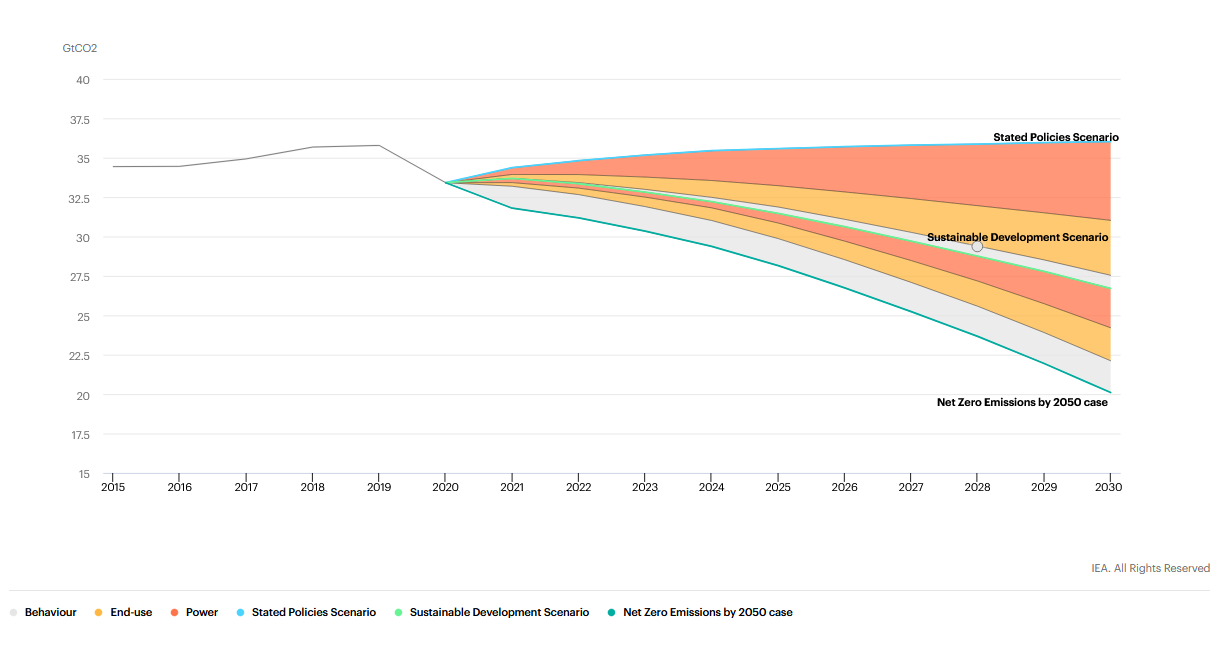 Interestingly, this year’s WEO no longer contains a “Current Policies Scenario” (CPS), which normally modelled the business-as-usual case and did not assume any further efforts in climate and energy policy in addition to the existing ones. The IEA argues that today’s circumstances do not allow for business-as-usual (source: IEA).

The Corona crisis dominates the year 2020

Basically, the corona crisis has considerable consequences for the energy sector, as Figure 2 impressively shows. As a result of the 5 per cent drop in global energy demand, the share of conventional energy sources in the energy mix has also fallen. As air traffic and passenger transport have declined, the demand for oil in particular has fallen. On the other hand, renewable energies are emerging as the winners of the crisis. Their share is the only energy source to have increased compared to the previous year.

Investment in energy has suffered a sharp decline of 18 per cent. But investment is needed, especially to advance renewable energy technologies. And it has been shown that investments in solar and wind energy are comparatively more consistent. For example, investments in offshore wind tripled in the first half of 2020 compared to the previous year. (source: Handelsblatt).

In all four scenarios of the WEO 2020, coal demand falls continuously, but only in the SDS and NZE2050 coal-fired power generation falls significantly. This is also shown in Figure 3. Especially in Europe and the US, coal demand is projected to fall sharply.

Coal’s share in the global power generation mix will thus fall from 37 per cent in 2019 to 28 per cent in 2030 in the STEPS and to 15 per cent in the SDS. This will be offset by an increased share of nuclear energy and a significant use of renewable energies.

As explained above, demand for oil fell sharply during the crisis, but could recover after the pandemic and return to pre-crisis levels. The decline in oil demand must therefore be driven by political regulation and new transport technologies.

The gas industry must also rise to the challenge and adapt to the energy transition. This will be possible with the help of alternative gases such as biomethane and low-carbon hydrogen or through new technologies (source: IEA).  Further information on the multi-talent hydrogen is available in our live online training in November.

Renewable energies as winners during this crisis

While the forecasts for conventional power plants have worsened during the crisis, the situation for renewable energies is much better. Due to the crisis, growth has only been slowed down for a short time and, according to the experts, will then proceed at full speed. This is partly due to tightened framework conditions in politics. For example, the European Parliament has tightened the EU climate target for 2030. The aim is to reduce greenhouse gas emissions by 60 per cent compared to 1990.

In the STEPS, renewable energies cover 80 per cent of the growth in global electricity demand by 2030. Hydropower will continue to be the largest renewable source of electricity in the future. But solar energy will experience the greatest growth in the next decade and is already cheaper than electricity from a new coal or gas-fired power station in almost every country in the world. Wind power will also experience steady growth. As the share of renewable energies increases, the question of storage will play an increasingly important role in ensuring grid stability (source: IEA).

Fossil energies will still be dominant in 2040

With regard to future primary energy demand, the paths of the STEPS and SDS scenarios are far apart. This is shown in Figure 4. In both scenarios, the demand in 2040 will be covered largely by oil and gas, although in the STEPS the demand for both energy sources will continue to increase in the future. In the SDS, on the other hand, a strong downward trend can be seen. Plus: In both scenarios, coal-fired power generation declines – but in the SDS with a two-thirds decline, and thus a much more drastic phase-out. This is due to the fact that existing power plants are retrofitted, upgraded or decommissioned in the SDS. 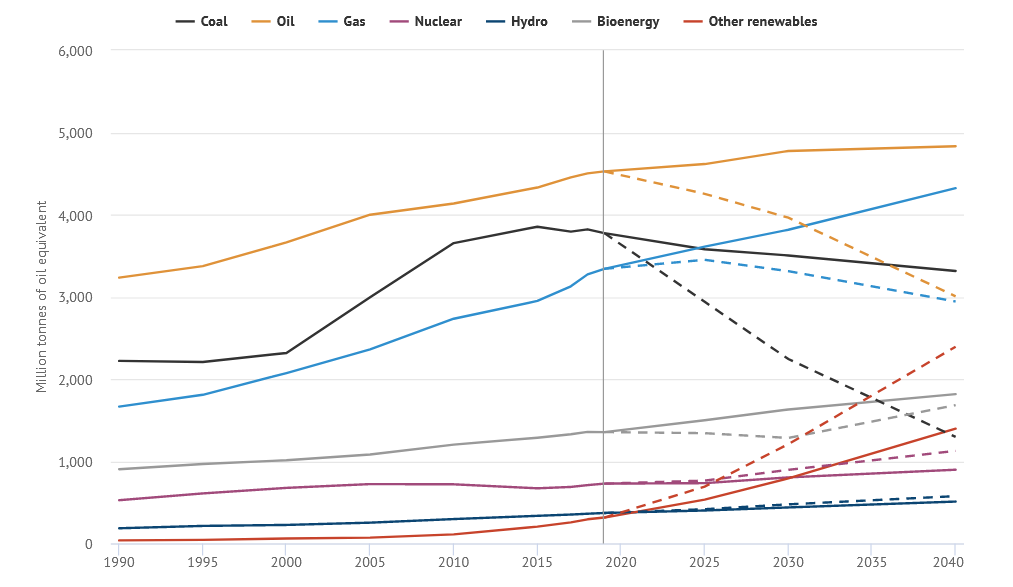 Figure 4: Global primary energy demand by fuel, millions of tonnes of oil equivalent, between 1990 and 2040. Future demand is based on the STEPS (solid lines) and SDS (dashed). Other renewables includes solar, wind, geothermal and marine. (source: CarbonBrief)

Taken together, low-emission sources in the SDS would account for 44 per cent of the global energy mix in 2040, compared to 19 per cent in 2019. Despite the sharp decline in fossil fuels, global net-zero emissions will not be reached until 2070. This would miss the target of keeping global warming below 1.5°C. Consequently, large-scale carbon capture and storage (CCS) is inevitable in both scenarios (source: CarbonBrief).

The pandemic is far from over and depending on how quickly the global economy recovers from the crisis, this will have an impact on future developments in the energy mix. In order to achieve net zero global emissions in 2050 (as targeted in the NZE2050 case), a number of more drastic additional measures would need to be taken over the next ten years.

For example, to reduce emissions by 40 per cent by 2030, almost 75 per cent of global electricity generation would have to come from low-emission sources by 2030 and more than 50 per cent of passenger cars sold worldwide would have to be electric in 2030 (compared to 2.5 per cent in 2019).

The focus would then have to be on electrification, massive efficiency gains and behavioural changes. Equally important is innovation in a wide range of technologies, from hydrogen electrolysers to small modular nuclear reactors. This means that a considerable effort is needed from governments, energy companies, investors and citizens.

In the second contribution of our series on the WEO 2020, we deepen our analysis and look at the impact of the IEA’s assumptions on commodity and electricity prices.

For example, investments in offshore wind tripled in the first half of 2020 compared to the previous year.

This is a great signal amid a year of concerning impacts. Any insight into how high that would have gone in the absence of COVID?