In the second part of the World Energy Outlook 2020 blog series, we provide a detailed overview of the significantly adjusted development expectations for the global oil, gas and coal markets. For this, we use our fundamental model Power2Sim. The model allows us to quantitatively estimate the long-term effects on European power prices until 2040 as well as the sales revenues of renewable energies. 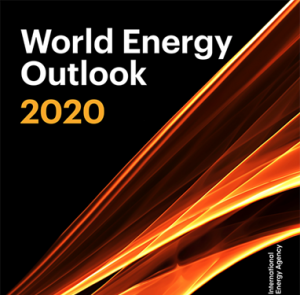 While at the beginning of the Corona Pandemic, there was speculation about when the energy world would return to its status quo. As the year progresses, the question arises as to whether this will happen at all. The newly published World Energy Outlook 2020 of the International Energy Agency (IEA) predicts above all structural distortions on the commodity markets. Even in the long term, traditional prices for primary energy sources will not recover from these distortions.

The WEO 2020 and the re-evaluation of commodity markets

With its World Energy Outlook, the International Energy Agency publishes a comprehensive assessment of the current state of the energy world every year. The given scenario paths are widely regarded as the authoritative source for medium- and long-term forecasts for the development of supply, demand and price trends on the global energy markets. Furthermore, the World Energy Outlook 2020 pays special attention to the oil, gas and coal markets.

In the standard “Stated Policies” (STEPS) scenario, analysts have revised the present value of oil and gas production by 2040 down by 20 % compared to the pre-crisis estimate in the WEO 2019. In the more progressive “Sustainable Development” (SDS) scenario, in contrast, the analysts even assume a reduction of the present value by 50 %. The IEA essentially argues this paradigm shiftmainly  with three temporally separated impact channels.

1. The historic demand-side shock of the last nine months leads to the lowest growth in energy consumption since the 1930s and lays the foundation for the current initial conditions.

Two factors in particular influence the oil price: the decline in mobility and a delayed response from OPEC. In contrast, the price of coal is suffering above all from the significant drop in demand for power in many countries. This is pushing hard coal-fired power plants, which previously often set prices, out of the market. The gas price was the least affected by the direct effects of the pandemic. However, it was already at a historic low at the beginning of the year – due to a strong global supply and mild climatic conditions. Evidently, the negative growth in demand and inelastic production has created overcapacities that the IEA estimates will not be eliminated for several years.

2. In the short to medium term, only a slow recovery can be expected due to several uncertainties on the supply and demand side.

How long the Covid-19-pandemic will continue to have an impact on the global economy is also one of the biggest question marks in the WEO. For a return of oil consumption back to pre-crisis levels, the IEA spans a time window from 2023 to 2030 for Europe. As it is well known, great uncertainty is poison for investments. Overcapacities and new market conditions, such as coal-to-gas switching, increase volatility. In the medium term, the IEA estimates that this will lead to a lack of efficiency improvements.

3. In the long run, this backlog leads to a worse market position against increasingly competitive renewable energies.

Two factors will ultimately determine how much the outlook for oil, gas and coal deteriorates up to the year 2040: growing scepticism about fossil energy sources as a profitable business model, as well as the push by many players to see the current crisis as an opportunity for energy system transformation. The artificial scarcity of CO2-certificates and the associated increase in the EUA price is a good example of how this imbalance can be played out in the long term. Markedly, the influence of this regulatory factor becomes particularly clear when looking at the differences between the STEPS and SDS scenarios. 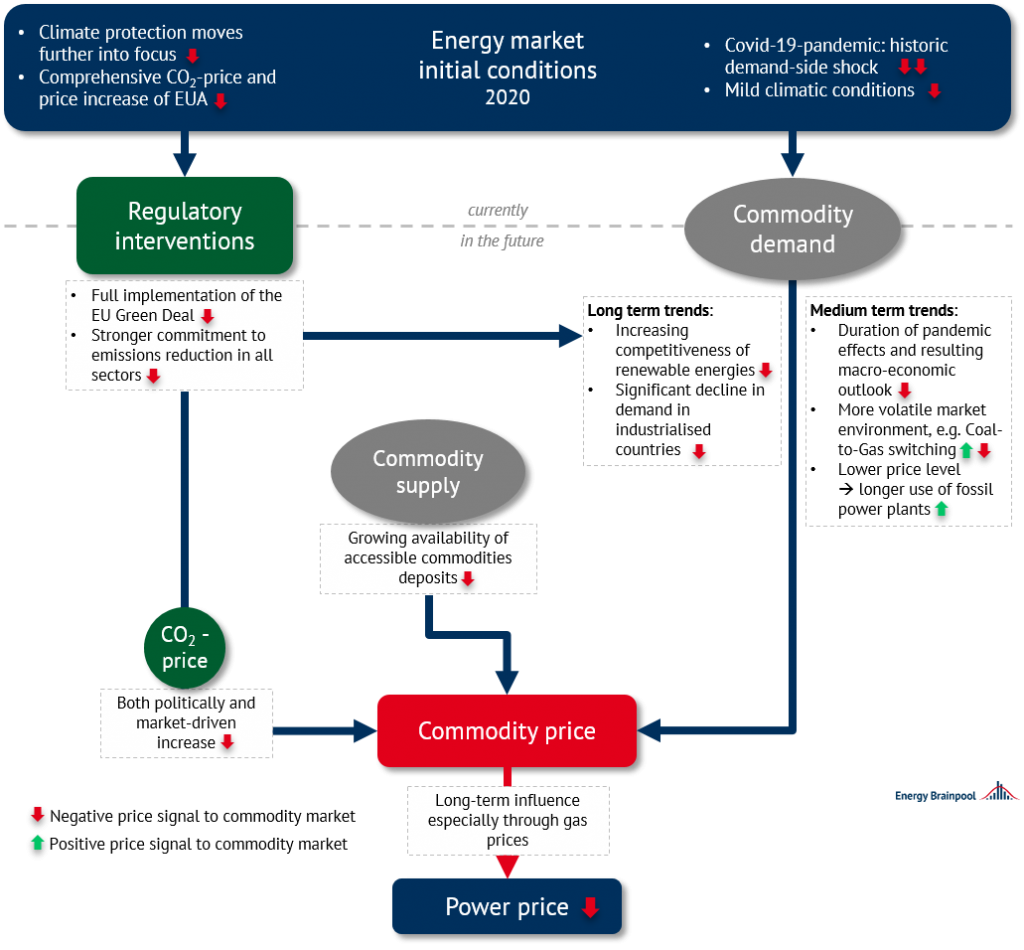 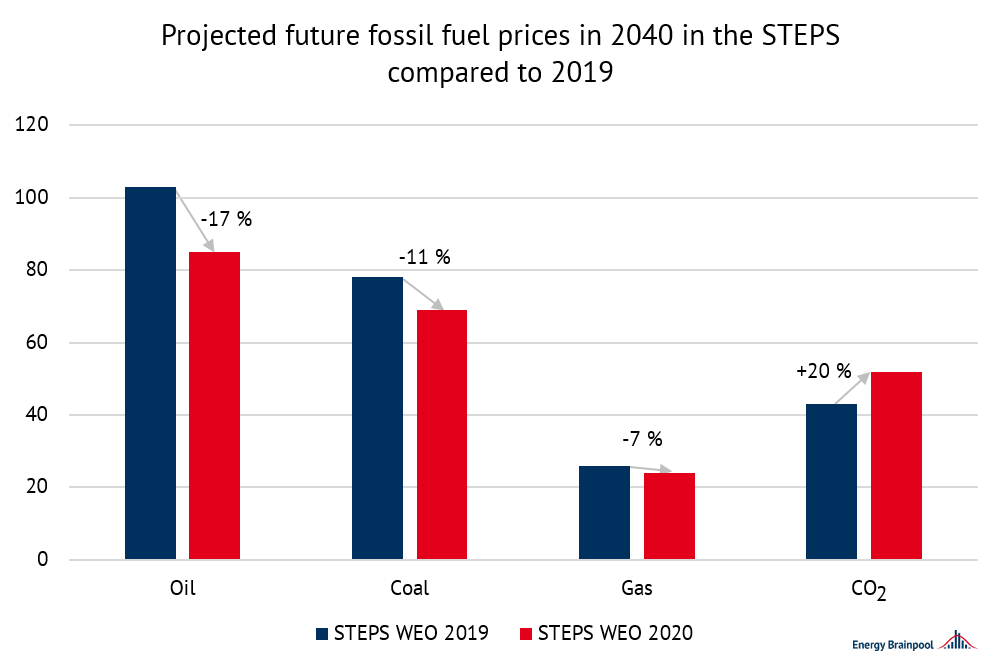 Figure 2: Projected future prices of fossil fuels in 2040 in the STEPS compared to 2019 (Source: Energy Brainpool)

The Stated Policies Scenario (STEPS) reflects all of today’s policy intentions and targets, insofar as they are backed up by detailed measures for their realisation. Here, the assumption is that the Covid-19-pandemic will be brought under control in 2021, and the global economy will return to pre-pandemic levels. 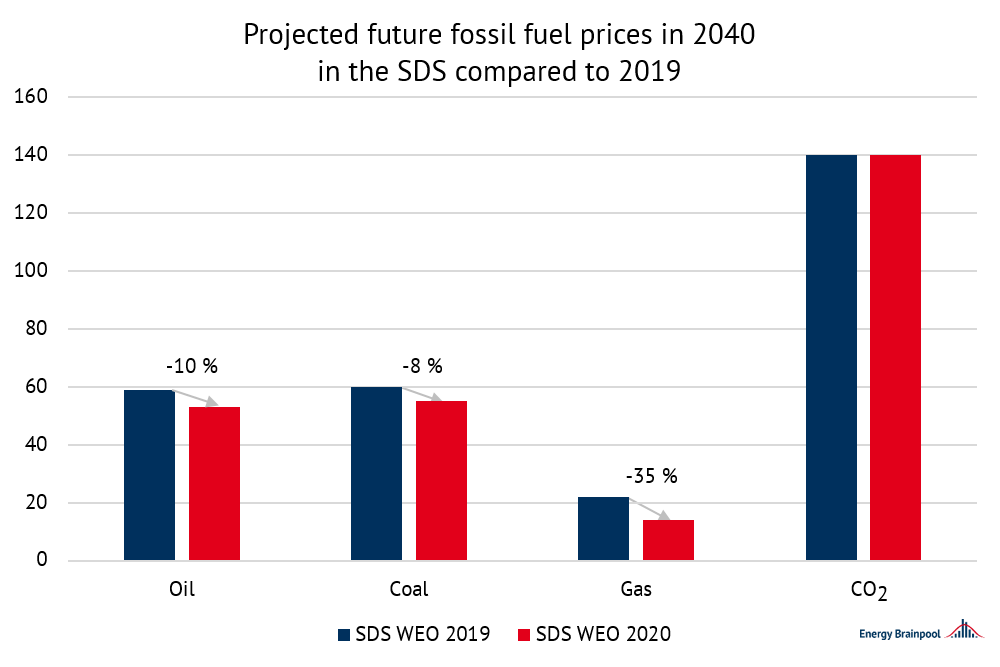 Figure 3: Projected future prices of fossil fuels in 2040 in the SDS compared to 2019 (Source: Energy Brainpool)

Generally, the Sustainable Development Scenario (SDS) assumes the complete achievement of all sustainability goals, including the Paris Agreement, and models the necessary policy path. The assumptions for the economy and public health are identical to those in the STEPS.

Figures 2 & 3 show that, in both STEPS and SDS, the forecasted prices of all commodities for 2040 have decreased compared to those from the WEO 2019. The development of the gas price in the SDS from €21.86/MWh to €14.28/MWh is particularly striking. A price drop of almost 35 %, compared to the forecast from the previous year, a drop more than three times as strong as for oil and coal.

The question arises as to why such a drastic correction of the forecasts was made, especially for gas and only in the SDS.

In summary, the reasons for this can be divided into three aspects, all of which send a negative price signal to the global commodity markets.

Firstly, a stronger commitment to emission reduction in all sectors is assumed. This has so far been underestimated. It includes the full implementation of the European Green Deal and thus further steps towards CO2 neutrality, as well as the focus on low-carbon gases in the long term. These measures, as well as a CO2-price that remains high in the SDS, are worsening the climate for fossil fuels and thus also for the gas industry.

Especially the market position of low-carbon gases, such as hydrogen or biogas, which are in direct competition with natural gas, is now seen to be much stronger in the long term. In addition, financial players such as the European Investment Bank are also attaching increasing importance to the conformity of investments with sustainability standards.

Decline in demand for gas

These assessments of the IEA experts have a negative impact on the demand for gas, the second part of the reasoning.

A gradual decline in demand for gas in Europe is expected in both the short and long term. In the short term, this is mainly due to the direct effects of the Covid-19- pandemic and is primarily noticeable in the form of a sharp drop in prices. On the one hand, the effects of this are growing scepticism on the part of investors and, on the other, the enabling of Coal-to-Gas switching. However, the potential for increasing demand is limited. In the long term, the SDS forecasts a slump in demand in the EU by 2040 of over 50 % compared to the 2019 level. In contrast, the global figure is only -12 %, as a growing gas demand in the Asian market is expected.

Adaptation of resources and reserves

The third part of the rationale refers to a changed basic assumption regarding the supply. In the WEO 2020, there is a 16 % upward adjustment of the US Shale Gas resources to 50 tcm instead of 43.1 tcm.

It should be remembered that, on the one hand, there will be no complete recovery from the demand shock initiated by the Covid-19-pandemic for the time being and, on the other hand, gas prices will be most affected by this in the long term. It can also be assumed that CO2 prices will remain largely unaffected by the above-mentioned influences due to their regulatory nature.

Our power price scenarios are similar to those of the WEO in that they are based on current political decisions and laws, prices and events. Specifically, the commodity price assumptions of our Energy Brainpool Scenario (EBP) are based on the Sustainable Development Scenario and the Business-as-usual Scenario (BAU) on the Stated Policies Scenario. The effects of the changed forecasts on power prices in our scenarios are explained below. 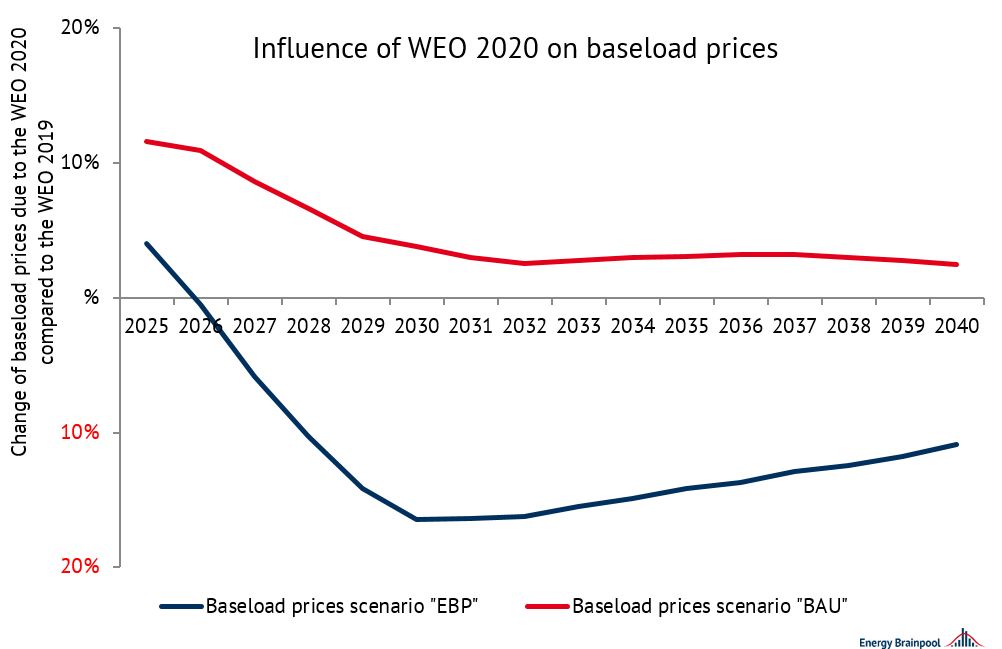 As can be seen in Chart 4, the progressive assumptions from the SDS scenario will have a pronounced impact on the average European baseload prices. At times, a negative correction of up to 15 % is expected due to the changed assumptions. For the future development of power prices, mainly the expected gas and CO2 prices are relevant.

Since almost all European countries are planning to phase out coal-fired power generation, coal prices will no longer play a role in the long term. Oil prices also have no direct influence, as the number of oil power plants is negligible. Through the linking of the gas price to that of oil, however, the oil price has an indirect influence on the gas price and thus the power price. The importance of this will decline in the future.

Development of gas and power prices not identical

However, the development of gas (-35%) and power prices (up to -15%) is not identical. The more the expansion of renewables and, in case of doubt, nuclear energy progresses, the less the influence of gas prices. This can be seen from the decreasing change in electricity prices and sales revenues to around -10 % in 2040, whereas in the BAU scenario a less drastic upward correction of the baseload prices can be expected. This is mainly due to the assumption of a higher CO2 price compared to the WEO 2019. 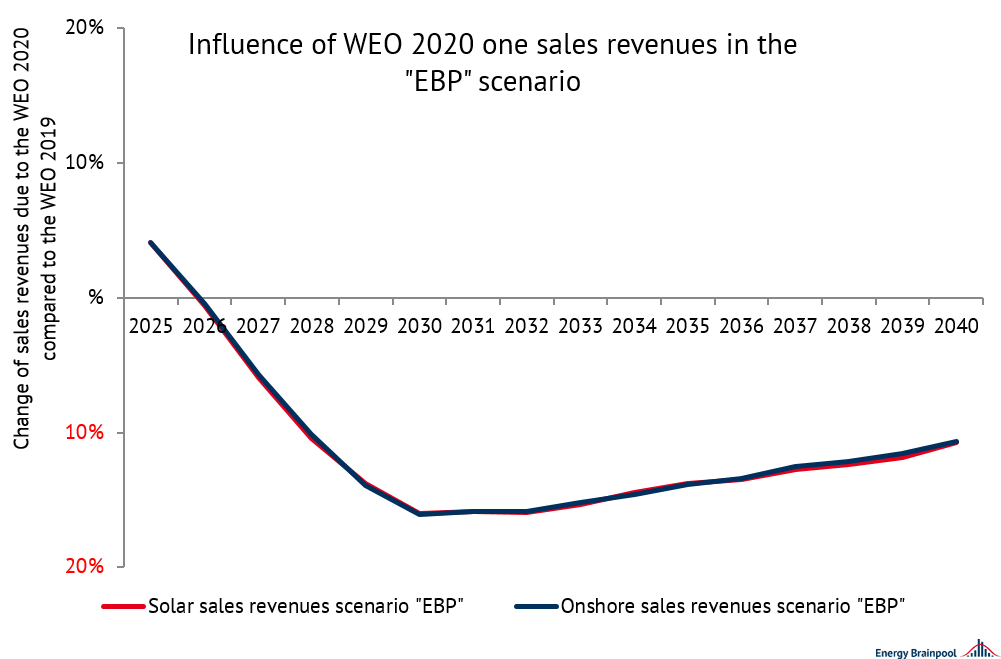 Figure 5: Influence of the WEO 2020 on the average European sales revenues in the EBP scenario (Source: Energy Brainpool) 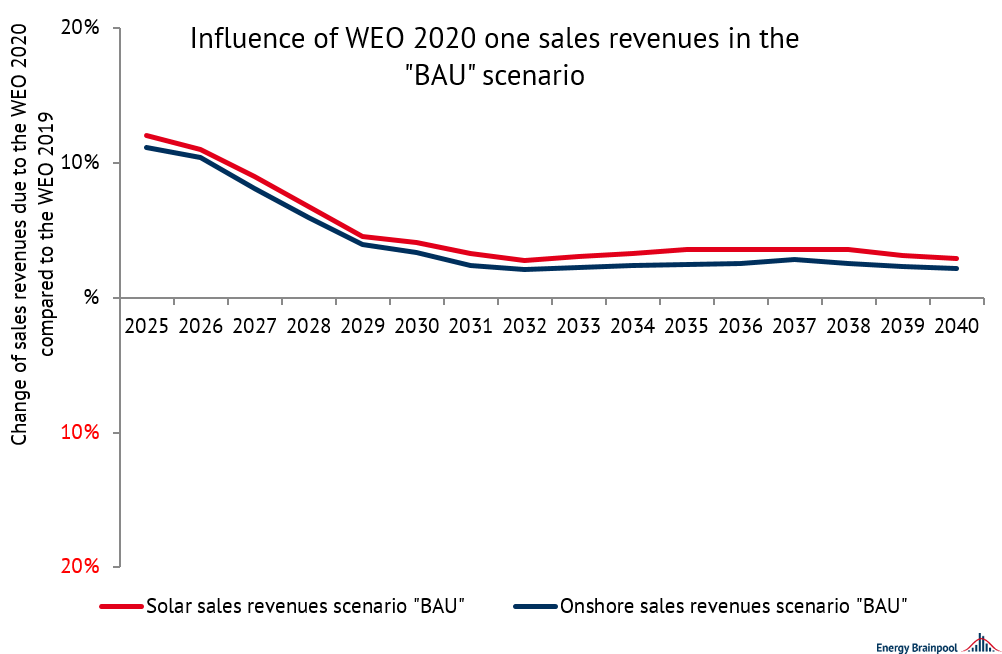 Figure 6: Influence of the WEO 2020 on the average European sales revenues in the BAU scenario (Source: Energy Brainpool)

The previous charts show a similar development of the average European sales revenues of Solar and Onshore Wind. However, sales revenues are somewhat less affected by the changes in the WEO 2020. This is due to the structure of these. Sales revenues are production-weighted average revenues. This means that, on average, less gas is consumed where generation by wind and PV is greatest, thus reducing the impact of gas and CO2 prices.

Based on our analysis, it is clear that the structural changes in the commodity markets resulting from the IEA assessment will have a substantial effect on the long-term development of power prices. The sales revenues of renewable energies will be affected to a similar extent.

Two sensitivities are particularly decisive for the strength of the effect: in the medium term, the further duration of the influence of the Covid-19 pandemic and the resulting uncertainty on the global energy markets. In the long term, especially the progressiveness of measures to achieve emission targets and thus, in essence, a strengthening of the competitive advantage of renewable energies.

We have adapted our scenarios to the current World Energy Outlook 2020. They will be available for dispatch from week 45. Please feel free to address any inquiries to Carlos Perez Linkenheil.