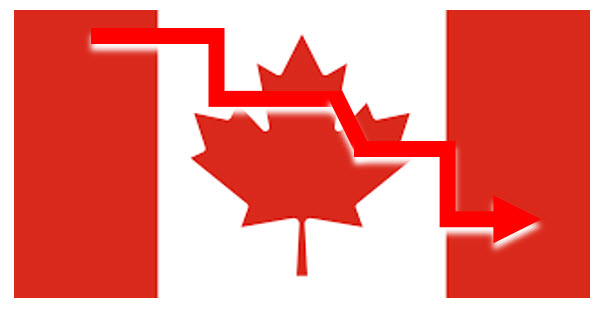 A Canadian case in point

Canada’s Prime Minister Trudeau turned this principle on its head Friday in announcing $1.7 billion to clean up orphaned and abandoned oil and gas wells in Alberta, Saskatchewan and British Columbia, which he estimates will help create 5,200 jobs in Alberta alone. And an additional $750 million fund was authorized to provide repayable loans to resource companies to enable them to meet their methane emission commitments.

The Canadian Broadcasting Corporation called this an energy policy both the oil patch and environmentalists could applaud?

Environment and Climate Change Canada produced the following map of the various industrial sectors and the pollution they produce. 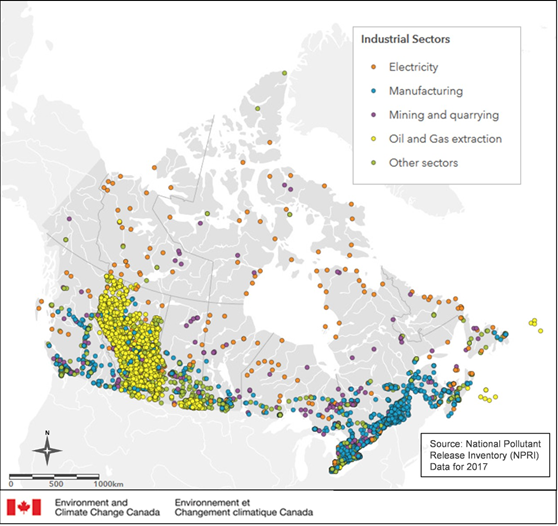 It is clear from this map that the greatest concentration of Canada’s pollution is in the province of Alberta and the manufacturing sector along the Laurentian Corridor of Ontario and Quebec.

In an article, A Tale Of Two Cleanups: Oil Sands Vs Mining, cleantechnica’s  Michael Barnard says the cleanup of Canada’s oil and gas sector is problematic for three reasons; net-present value of money (NPV), technical arrogance, and regulatory capture.

Barnard claims that although the oil sands and mining sectors have faced similar challenges, it is the mining factor alone that has managed to keep its messes intact.

The experience of the writer, however, with respect to nuclear waste, the most lethal pollutant of the mining and electricity sector, this isn’t the case. The problems of NPV, technical arrogance, and regulatory capture run rampant in the nuclear sector too.

It should be noted, 2 of the 10 nuclear waste disposal options listed in Wikipedia are the inventions of the writer. They are the subductive waste disposal method and the nuclear assisted hydrocarbon production method.

The subductive waste disposal method, is unique in that it eliminates both nuclear and toxic waste materials, some of which exists in perpetuity, in repositories radiating from an access tunnel constructed into a subtending tectonic plate, where the material descends within the subducting plate into the mantle of the earth.

Yevgeny Velikhov of the Kurchatov Institute in a 2004 article, World has no feasible project yet to liquidate nuclear waste said, of the options suggested by researchers, “only three can be examined dead serious and even in this case with a great share of doubt and in the most distant future. Radioactive waste can be shipped to the sun by space freight ferries, to put into pits of the Antarctic ice cap and to place it into earth’s crust at great depths so that it can melt in the plasma of the earth later.”

The latter is the subductive waste disposal method that has been suppressed for Barnard’s three reasons.

First, in 1989 the nuclear power industry, although it had been producing waste since 1962, had never set aside any money for waste disposal. In fact, it wasn’t until 2002 when the Nuclear Waste Management Organization of Canada was formed that an independently managed trust fund was established for the purpose of dealing with this waste.

As of the end of 2019, the balance in that trust fund was $4.8 billion, whereas the projected cost for a repository in 2015 $ was estimated at $23.6 billion. To all intents and purposes, therefore, nuclear waste in Canada is as much an orphan as the abandoned oil and gas wells of Alberta, Saskatchewan and British Columbia.

And as with that sector, technical arrogance and regulatory capture are endemic to the nuclear power sector.

A patent for the Nuclear Assisted Hydrocarbon Production Method, was filed in 2008. The method is for the temporary or permanent storage of nuclear waste materials comprising the placing of waste materials into one or more repositories or boreholes constructed into an unconventional oil formation. The thermal flux of the waste material fractures the formation, alters the chemical and/or physical properties of hydrocarbon material within the subterranean formation to allow removal of the altered material. A mixture of hydrocarbons, hydrogen, and/or other formation fluids are produced from the formation. The radioactivity of high-level radioactive waste affords proliferation resistance to plutonium placed in the periphery of the repository or the deepest portion of a borehole.

In 1980, the IAEA-sponsored International Nuclear Fuel Cycle Evaluation recommended the establishment of multinational, international, repositories due to their non-proliferation advantages. And in 2016 a high-level commission in South Australia recommended the establishment of an international repository in that country, which the commission determined would generate more than AUD 100 billion ($89 billion Cdn) in income in excess of the expenditure.

The Australian repository was to accommodate 90,000 tonnes of the 250,000 tonnes that had been accumulated globally to 2010 so, the total revenue potential for decommissioning of high-level waste would be in excess of $250 billion Cdn.

As Business Insider pointed out 10 years ago the nuclear assisted hydrocarbon production, can unlock a portion of the 1.2 to 1.8 trillion barrels of oil within the Green River Formation of the United States and Metal Miner showed how the same technology  can produce bitumen from Alberta’s oil sands. But even if this technology never produced a single barrel of oil, the thermal flux of high-level waste would create a bitumen-lined heat chamber that would seal the waste inside the chamber in perpetuity.

Such repositories would be tremendous, safe revenue generators for the host community.

In December of  2019, the Premier of Alberta established an “energy war room,” armed with a $30-million budget to target environmentalists, journalists and anyone else it believes is spreading “misinformation and lies” about Canadian energy.

Whistle blowers like this writer, are the prime target of the war room, which is a violation of the writer’s human rights and the rule of law integral to Canada’s repeatedly asserted commitment to promoting international justice and respect for human rights, which have been violated no less egregiously at the federal level over the course of the past 30 years.

It concludes with a call to recognise and break this pattern, to unleash more effective and just climate policy.

A payment of $2.45 billion to the western provinces to clean up orphaned wells and address emissions are unnecessary opportunity costs.

The 5,200 jobs this money purportedly will create in Alberta, kills exponentially more jobs in Alberta and elsewhere that could enable the mitigation of global warming.

All three of the western provinces have had decades to address the nuclear waste problem and to profit handsomely from the effort, but instead have done nothing and yet seek to be compensated for their indifference?

Patent royalties from either the subductive waste disposal method or the nuclear assisted hydrocarbon production method could have enabled the research, development and rollout of thermodynamic geoengineering, the solution to global warming but instead the inventor is the one on his uppers.

As the current pandemic has shown, delay is deadly, especially with global warming.

The succession of policy prevarication can't come soon enough and hopefully not too late.