Over the weekend, the New York Times noted that the solar power “craze” is partly responsible for Wall Street’s recent good times. The Times used the example of solar giant SolarCity, which has seen a sevenfold increase in its share price to $59.27 since it went public, but this could just be starters for the US solar industry. An international research team based at North Carolina State University has come up with a simple way to increase the efficiency of organic solar cells by more than 30 percent, leading to lower costs and a much bigger market.

That’s great news for companies like SolarCity. The company – another brainchild of Tesla creator Elon Musk – packages and installs solar systems, so it’s not subject to the kind of downward global pricing pressures that doomed US manufacturers like Solyndra.

In fact, down works good for SolarCity’s business model. Solar cells account for about half the cost of a fully installed and connected solar system, so a major drop in the cost of solar cells will have a significant impact on overall costs. That gives SolarCity and other solar packagers another opportunity to offer their systems at more competitive prices, and nudge conventional fuels out of the market. 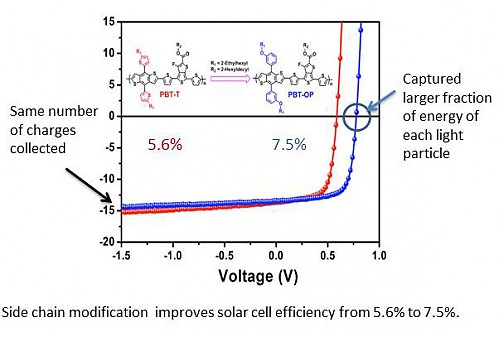 With that in mind, let’s take a look at that NCSU solar cell efficiency breakthrough, which was just published in the journal Advanced Materials.

The research applies to organic solar cells, which refers to a relatively new class of solar cells based on polymers (loosely speaking, plastic). Organic solar cells are less efficient than silicon, which is still the gold standard, but they make up for it with the potential for a broader range of applications and a low cost manufacturing process.

The key to the breakthrough is the creation of a new low cost polymer by NCSU’s partner in the project, the Chinese Academy of Sciences. Called PBT-OP, the new polymer is made from two readily available monomers and a third monomer that can be synthesized with relative ease (monomers are identical molecules that can be bonded together into long chains as polymers).

The new polymer skips over a key hurdle for lowering the cost of organic solar cells, which is the use of fluorine. Typically, in organic solar cells a fluorine atom is needed in the polymer’s “molecular backbone” in order to increase efficiency, but that is a complicated processes and it introduces significant manufacturing costs.

PBT-OP has the fluorine advantage without the fluorine. To get a handle on that, all you need to know is that organic solar cells consist of an electron acceptor material and an electron donor material, each with its own molecular orbit.

Once you get that nailed down, what you’ve done is to create a kind of super-efficient electrical highway, in which excitons (the energy particles created when a solar cell absorbs light) travel as quickly as possible within the interface of the donor and acceptor domains. That means you minimize the loss of energy that occurs in a conventional organic solar cell.

The possible drawback in changing the molecular structure of these materials is that you may enhance one aspect of the solar cell but inadvertently create unintended consequences in devices that defeat the initial intent. In this case, we have found a chemically easy way to change the electronic structure and enhance device efficiency by capturing a lager fraction of the light’s energy, without changing the material’s ability to absorb, create and transport energy.

Thank you, Harald. Now let’s also thank the U.S. Department of Energy, which funded the research project in partnership with the Chinese Ministry of Science and Technology.

Now let’s get back to that SolarCity/Tesla connection. Tesla Motors co-founder and CEO Elon Musk is best known for his innovation in the electric vehicle field, which seamlessly marries EV charging stations with onboard technology in the form of Tesla Motors’s Supercharger network, and he is also the Chairman of SolarCity.

Tesla has been introducing Supercharger stations powered at least partly by on site solar installations in the form of canopies, so it’s no surprise that SolarCity is providing the installations.

SolarCity is also the force behind solar-powered home EV charging stations and SolarStrong, which involves $1 billion worth of rooftop solar panels for military housing. Los Angeles Air Force Base and Fort Bliss are two examples, with Los Angeles being particularly interesting because the base has also been introducing electric vehicles.

Given SolarCity’s track record with thin-film solar cells and the solar/mobility connection with Tesla Motors we’re thinking that it won’t be long before both companies cook up new applications for organic solar cells as the cost of the technology continues to drop.

The company — the nation’s largest provider of rooftop solar systems, with more than 80,000 customers — has not made a dime. And, frankly, no one quite seems to know when, or if, it will.

You write “In fact, down works good for SolarCity’s business model”. That business model – relying on government handouts and Elon Musk’s bankroll to corner a market – is still losing money. Wall Street is excited because no one wants to miss out – will SolarCity be the next Tesla? Apparently not, if you ask customers:

Complaints to the Better Business Bureau of misleading marketing and flawed installations, along with negative reviews on social media forums like Yelp, appear to be rising.

Hopefully Musk will cash out while he’s ahead, and put the money into Tesla, or SpaceX, or any other technology with a future.