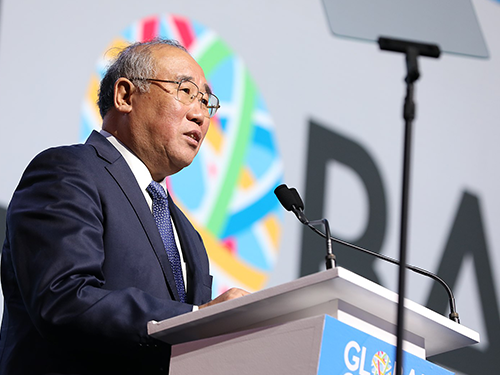 With at least two veteran negotiators back for a repeat engagement, a “dream team” of newer advocates coalescing, and a massive sense of urgency carrying over from 2020, this year’s United Nations climate conference in Glasgow may be shaping up as the biggest COP “moment” since the 2015 Paris Agreement—even with the expected gaps in a major upcoming science report drawing comparisons to “Star Wars without Darth Vader”.

Last week, China announced that Xie Zhenhua, “one of its most respected climate experts and broker of the Paris Agreement,” will be leading its delegation in Glasgow in November, Climate Home News reports. At age 71, Zhenhua is well past the point when the country’s officials are expected to retire.

“The move is widely seen as a response to U.S. president Joe Biden’s appointment of John Kerry as his special presidential climate envoy and a signal of Beijing’s willingness to engage with Washington on climate,” Climate Home writes.

“From the failed 2009 climate talks in Copenhagen to the 2014 U.S.-China deal that underpinned the Paris Agreement a year later, the two men developed a strong and personal relationship, while Kerry served as secretary of state under the Obama administration,” the UK-based publication adds. “Climate Home News has learned that Xie and Kerry have been in contact in recent days and discussed energy and climate policy.”

“This is clearly a tailored move towards the U.S., an effort to ensure the diplomatic channels are there,” veteran climate and energy specialist Li Shuo of Greenpeace East Asia told Climate Home. “With his experience and contacts, Xie’s appointment will at least help reduce transactional cost in China’s climate diplomacy.”

“Xie Zhenhua has been a very important figure in the development of climate policy domestically and internationally, especially in terms of getting climate change to move up the state policy agenda in China,” added Sam Geall, acting CEO of China Dialogue. “I don’t know anyone who has risen to this level of political personality. No one has been so outspoken and entrepreneurial since him. I can’t imagine who else could have taken that role. There is no one else waiting in the wings.”

Climate Home delves into some of the recent discussion about the prospects for climate cooperation between the world’s two biggest superpowers, at a moment when there’s much else they disagree on. And in a separate post, the publication profiles a new cast of characters—including Barbados Prime Minister Mia Mottley, Malawi forestry and natural resources minister Nancy Tembo, Costa Rican environment minister Andrea Meza Murillo, Danish Climate and Energy Minister Dan Jørgensen, and French international development agency CEO Rémy Rioux—bringing expertise and momentum to a negotiating process often known for its glacial pace.

The Winnipeg-based International Institute for Sustainable Development (IISD) points to a busy negotiating calendar through this year as a positive sign for progress on environmental issues that demand a cooperative response.

“Global decision-making processes require participants from all member countries,” write Lynn Wagner, senior director of the institute’s Tracking Progress program, and Earth Negotiations Bulletin writer/editor Jennifer Allan. And “there is an enormous backlog of work,” after a year of meetings and decisions postponed due to the COVID-19 pandemic. The post goes through an inventory of delayed discussions on climate change, biodiversity, ozone protection, and more.

When COP 26 does convene, international funding for climate action will have to be high on the agenda, UN Climate Secretary Patricia Espinosa said last week. The richer nations of the world are now overdue on a 2009 promise to allocate US$100 billion per year, beginning no later than 2020, to climate finance. Since then, the UN Green Climate Fund has been running short, and agencies haven’t been able to consistently distinguish outright grants from loans—with some calculation methods embodying the expectation that the regions most affected by the climate crisis will repay investments by countries that have benefited the most from the fossil fuel era.

“Promises made must be promises kept,” Espinosa stressed. “The pledges must be honoured and updated. The obligations to support the efforts of developing countries cannot and will not be ignored—it is in the self-interest of the developed countries to fulfill these commitments.”

The Guardian says Espinosa’s remarks mark “a concerted push by the UN to ensure climate finance pledges are met ahead of COP 26. Last December, the UN secretary general, António Guterres, said the $100-billion pledge was key to a successful COP 26 summit.”

The other approaching news is the release of the Sixth Assessment Report of the Intergovernmental Panel on Climate Change (IPCC), a mammoth undertaking that has been years in the making and involved input from hundreds of climate scientists around the world. The IPCC is expected to release its findings in a series of reports, with the final synthesis landing in 2022.

The IPCC reports “have long been the world’s most definitive statements on human-induced climate change from fossil fuel use,” Yale Climate Connections writes. “Rather than carrying out its own research, the IPCC crafts its consensus assessment reports based on the vast array of peer-reviewed work in science journals. The draft reports are scrutinized by experts and officials in UN member governments before they become final.”

That consensus process has often led to concerns that the IPCC’s findings are watered down at the behest of governments more interested in receiving the most comforting assessments on the science of climate change, rather than the most accurate ones.

While the IPCC’s final assessment is still taking shape, “the chapter outlines suggest a more interwoven look at how society is affected by, and responds to, the climate crisis,” Yale says. “The report could also end up tipping its hat toward a narrowing range of potential outcomes, as reflected in recent key papers and greenhouse gas emission trends. If the most dire scenarios of past reports are a bit less likely than it seemed a decade ago, some of the tamer scenarios also might be increasingly out of reach.”

What the report apparently won’t do, Climate Home writes, is leave behind the UN agency’s longstanding refusal to acknowledge “the obstructive role of fossil fuel lobbying” in delaying climate action.

That omission is like “trying to tell the story of Star Wars, but omitting Darth Vader,” said Drexel University environmental sociologist Robert Brulle, who last November tweeted his refusal to participate in one of the IPCC’s three working groups. “It became clear to me that institutionalized efforts to obstruct climate action was a peripheral concern,” he wrote. “So I didn’t consider it worth engaging in this effort. It really deserves its own chapter & mention in the summary.”

Climate Home says Brulle’s tweet “sparked a lively conversation among scientists, with several supporting his concerns and others defending the IPCC, which aims to give policy-makers an overview of the scientific consensus.”

University of Lausanne ecological economist and Working Group 3 lead author Julia Steinberger said there is “a lot of self-censorship” within the IPCC, telling Climate Home that content is “immediately flagged as political or normative or policy-prescriptive” when authors identify enemies of climate action, like fossil fuel companies.

She said the latest series of IPCC reports will likely be “a bit better” on this score. “But mainly because the world and outside publications have overwhelmingly moved past this and the IPCC is catching up, not because the IPCC is leading.”

Working Group 3 co-chair Jim Skea said the critiques are “completely unfair”, adding that the IPCC’s seven-year production sequence makes it impossible to “respond on a 24/7 news cycle basis to ideas that come up.”

“We’re not an advocacy organization, we’re a scientific organization,” and “it’s not our job to take up arms and take one side or another,” Skea added. “That’s the strength of the IPCC. If it oversteps its role, it will weaken its influence” and “undermine the scientific statements it makes.”