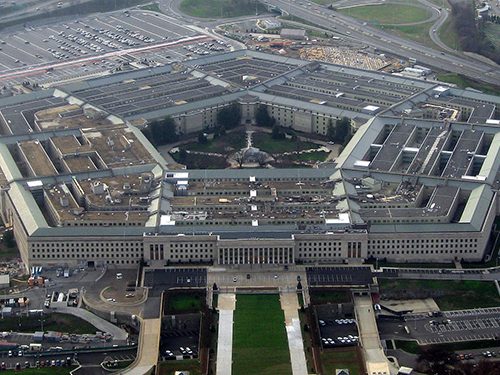 In sharp distinction from its commander-in-chief, the American military fully comprehends the threat of climate change—and says it is taking action, even as it maintains its own massive carbon footprint.

Hurricane Michael “devastated” Tyndall Air Force Base when it hit the Florida panhandle on October 10, 2018—one of many object lessons that have helped remove any illusions the Pentagon may have held about the dangers posed by the climate emergency, writes military analyst Sébastien Roblin in an op-ed for NBC News.

Alongside the direct assaults of extreme weather—flooding, wildfire, severe storms—the U.S. military is also preparing for degraded levels of effectiveness in the field, increased redirection of personnel and resources to environmental disaster response, and, “potentially, the collapse of the infrastructure it depends upon to function.” A January 2019 Department of Defense report—one that Roblin describes as “nothing short of terrifying”—identifies 79 U.S. military bases under serious threat from sea level rise and flooding—to the point of becoming unusable, in the case of Virginia’s massive Norfolk naval base.

Also under threat: the well-being of military personnel posted abroad, with a particular concern for water shortages produced by saltwater intrusion and drought.

NBC says the climate emergency also poses profound and escalating threats to and on the home front. Roblin notes that “damage from storms and increased energy consumption linked to rising temperatures could cause the collapse of the United States’ aging energy infrastructure in the next 20 years, leaving tens of millions without electricity and the air conditioning, refrigeration, Internet, and smart phone conveniences we take for granted in modern life.”

The Pentagon understands, as well, that “flooding could also damage and destroy U.S. ports through which America receives around 80% of its agricultural imports and exports, causing further economic chaos”—and leaving the military to devote its resources to humanitarian relief rather than its more traditional roles.

To protect its own facilities, Roblin says the military is “building sea walls around vulnerable bases, planning to transport more water for units deployed in the field, and preparing logistical capabilities that can respond to severe weather events like Hurricane María.” Also on the books: a sustainability plan that will require every military base to improve energy efficiency and “reduce its reliance on fossil fuels by a certain amount every year.”

While it’s a decent start, Roblin notes, the Pentagon needs to do much more—not least by addressing its own egregious carbon footprint. “It is the largest single institutional producer of greenhouse gases on the planet, having generated an estimated 766 million metric tons of CO2 emissions between 2001 and 2017,” he writes. “It generates more pollution annually than many small countries.”