UK and EC Drag Themselves Towards Net Zero Emissions

In both London and Europe, the effort to reduce emissions summons up a picture of a person, put on a diet by a doctor, eying a cream pie: the head knows it shouldn’t eat it, but the body has to be dragged kicking and screaming away from the table.

That’s the picture I get after studying three recent developments – in the UK’s climate change legal framework, the EU’s Energy Performance of Buildings Directive, and its Climate Action Regulation.

All three developments embody the praiseworthy aspiration to reach net-zero greenhouse gas emissions around the middle of the century (in line with the Paris Agreement on climate change), but the fine words are not yet backed up by measures that will achieve that goal. 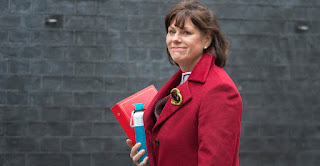 She made the announcement at a meeting of the Commonwealth Heads of Government last week. “After the IPCC report later this year, we will be seeking the advice of the UK’s independent advisers, the Committee on Climate Change, on the implications of the Paris Agreement for the UK’s long-term emissions reduction targets,” she said.

The UK’s Energy and Clean Growth Minister Claire Perry made a significant and unexpected announcement that she will ask the country’s Committee on Climate Change (CCC) for ideas on how to adopt the goal of the Paris Climate Agreement to limit global warming to below 2oC above pre-industrial levels, with an aspiration to keep it below 1.5oC. This means achieving net zero emissions by 2050.

The independent Committee on Climate Change (CCC) exists to set five year plans for the UK to meet its legally binding target under the Climate Change Act (2008) of reducing carbon emissions by 80% by 2050 compared to 1990. It then monitors and reports on the UK’s progress.

Perry’s announcement was welcomed by the low carbon industry and campaign groups, but they cautioned that legislation is needed soon.

Dustin Benton, policy director at thinktank Green Alliance said, “The Government has made real progress on some issues, such as diesel cars and offshore wind, but there are glaring holes in areas such as energy efficiency and onshore renewables,” adding waste, housing and transport to the list.

Greenpeace executive director John Sauven said this would mean the end of plans for a new runway at Heathrow. “No new runway at Heathrow will fit inside our carbon budget. The data show that the challenges posed by emissions from transport – land, sea and air – and our reliance on gas for heating will have to be confronted as a matter of urgency.”

The CCC itself recently challenged the Government’s policies, saying that they do not go far enough even to meet current targets.

They want to see “urgent action” on the Clean Growth Strategy (published in October 2017), and to see detail on a long list of ideas that have been adopted by the government  to reduce emissions but which are not accompanied by substance on strategy.

These include: phasing out sales of petrol and diesel cars and vans by 2040, increasing the energy efficiency of homes by 2035 and the energy efficiency standards of new buildings, how to phase out installation of gas and oil, to generate 85% of the UK’s electricity from low-carbon sources by 2032, and deploying carbon capture and storage technology.

The CCC says, “There is a particular risk around meeting the fourth carbon budget which begins in just five years’ time, including completion of Hinkley Point C nuclear power station”. This is looking increasingly unlikely due partly to EDF’s problems on completing a similar reactor at Flamanville.

Meanwhile, on 17 April, the European Parliament approved the Energy Performance of Buildings Directive. This will target the renovation of buildings, and the creation of smarter energy systems for new buildings, acknowledging that around 75% of buildings in Europe are currently energy inefficient and that buildings are the largest single energy consumer in Europe, using around 40% of final energy.

The revisions to the previous version of the Directive form the first of eight proposed steps towards the EU’s Energy Union ambitions and include advocating the use of smart technologies to introduce automation and control systems which could ensure buildings operate efficiently, the use of a ‘smart readiness indicator‘ which can measure a building’s capacity to integrate new technologies, support for the introduction of new infrastructure for e-mobility in new buildings, and a path towards zero-emissions buildings by 2050.

There are also mechanisms to create the investment needed to renovate existing buildings to make them more energy efficient: at least 40% of infrastructure and innovation projects financed by the European Fund for Strategic Investments should contribute to the Commission’s commitments on climate action and energy transition in line with the Paris Agreement. There is also funding under the European Investment Bank’s Smart Finance for Smart Buildings Initiative. This aims to unlock a total of €10 billion in public and private funds between now and 2020 for energy efficiency projects.

The European Commission Vice-President for the Energy Union, Maroš Šefčovič, said: “As technology has blurred the distinction between sectors, we are also establishing a link between buildings and e-mobility infrastructure, and helping stabilize the electricity grid.”

The Council of Ministers have yet to finalise agreement of the Directive before it enters into force. Member States will have to transpose the new elements of the Directive into their national laws within 20 months. If the UK eventually Brexits, it will not have to.

I have already reported here and here on how the Directive has been watered down compared to what it might have been. How effective it is as will depend on the policies adopted by each Member State, who, in the coming months, are supposed to develop National Energy and Climate Plans to show how they expect to meet their commitments under the directive.

The European Council already has an overall GHG reduction target for the EU, of reducing emissions 40% by 2030 compared to 1990, with a subtarget for sectors not included in the emissions trading system (ETS) of 30% reduction compared to 2005. The CAR gives each country an individual target to implement that target. France and Germany have by far the highest targets. Eastern European and other less industrialised countries such as Greece and Portugal will be able to continue to increase emissions [for the full list see the table on page 5 of this analysis.

This is not as straightforward as it might seem. The CAR is meant to contain flexibilities to let nations meet targets more cost-effectively, but, according to separate analysis by three think tanks (Sandbag, T&E and Öko Institut), this means it is full of loopholes that allow countries to get out of their commitments, meaning it will only lead to 25-26% reductions compared to 2005. Furthermore, they say, it does not provide the incentives to put the EU in line to fully decarbonise these sectors by 2050.

In respect of action on reducing emissions, the UK was one of the EU’s high performers. With it out of the Union, the rest will have to try harder to achieve that 40% target. However, T&E says they won’t make it. “Countries that will not meet their 2020 targets will be rewarded by being allowed to emit even more”.

It cites the example of Ireland, whose emissions since 2011 have steadily increased. Rather than the CAR giving it a baseline starting point for emission reductions of the 2020 target of 20% relative to 2005 levels, it is being given a 2018 level, which means, because it is failing to reduce emissions to badly, it has to achieve just 5% relative to 2005 emissions. Austria, Belgium or Finland could also be among the countries that will benefit from this starting point.

To return to the picture described in my opening paragraph, at least the head has drawn up rules; whether it can implement and enforce them effectively is another matter entirely.

A version of this piece appeared on The Fifth Estate six days ago.

“Any energy saved by a net-zero energy program is far exceeded by that consumed by parliamentary consideration, office space, think tanks, analysis, efficiency improvements, travel, symposia, TED talks, conferences, and enforcement required to discuss, approve, and implement the program itself.”

When it’s disproven I’ll accept the idea net-zero energy programs are something more than a tragic conceit.

fine words are not yet backed up by measures that will achieve that goal.

You can say that again….

Germany officially acknowledges that a CO2 price “can generally lead to a cost-efficient reduction of emissions,” but seems to have no intention of joining any additional European CO2 pricing systems other than the EU ETS. In an answer to a parliamentary inquiry submitted by the Green Party, the government said that the carbon pricing schemes used in other countries, such as the UK, would not be applicable in Germany due to “the respective national circumstances” of (coal) power production and demand.