Two more independent studies back the Hockey Stick: Recent global warming is unprecedented in magnitude and speed and cause

There are now more studies that show recent warming is unprecedented –  in magnitude and speed and cause — than you can shake a stick at!

As with a pride of lions, and a conspiracy of disinformers [or is that a delusion of disinformers?], perhaps the grouping should get its own name, like “a team of hockey sticks” (see “The Curious Case of the Hockey Stick that Didn’t Disappear“).

Reconstructed tropical South American temperature anomalies (normalized to the 1961–1990AD average) for the last ∼1600 years (red curve, smoothed with a 39‐year Gaussian filter). The shaded region envelops the ±2s uncertainty as derived from the validation period. Poor core quality precluded any chemical analysis for the time interval between 1580 and 1640 AD.

Yes, the 39‐year Gaussian filter appears to wipe out over half of the warming since 1950 as this NASA chart makes clear: 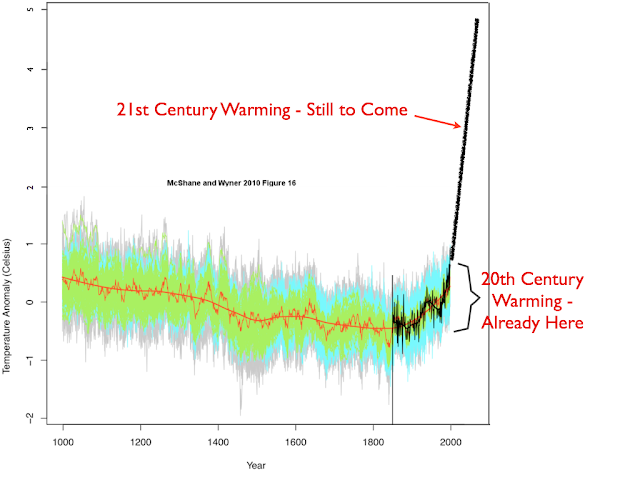 The rate of human-driven warming in the last century has exceeded the rate of the underlying natural trend by more than a factor of 10, possibly much more.  And warming this century on our current path of unrestricted greenhouse gas emissions is projected to cause a rate of warming that is another factor of 5 or more greater than that of the last century.  We are punching the climate beast — and she ain’t happy about it!

For the record, even a moderate MWP (even if it were global, which remains unproven) does nothing whatsoever to undermine our understanding of human-caused global warming.  The temperature trend in the past millennium prior to about 1850 is well explained in the scientific literature as primarily due to changes in the solar forcing along with the effect of volcanoes, whereas the recent rise in temperature has been driven primarily — if not almost entirely — by human activity (see Scientist: “Our conclusions were misinterpreted” by Inhofe, CO2 — but not the sun — “is significantly correlated” with temperature since 1850 and a post to be named later).

The Geophysical Research Letters paper, “Twentieth century warming in deep waters of the Gulf of St. Lawrence: A unique feature of the last millennium” concludes:

… irrespective of the precise mechanisms responsible for the temperature variations reconstructed from core MD99‐2220, it is unquestionable that the last century has been marked there by a warming trend having no equivalent over the last millennium.

For those keeping score at home, here are a few more members of the team of hockey sticks (although the last two aren’t actually independent, as discussed here).

From Unprecedented warming in Lake Tanganyika and its impact on humanity (2010):

From Sorry disinformers, hockey stick gets longer, stronger: Earth hotter now than in past 2,000 years (2008)

And yes, McShane and Wyner has been debunked in the blogosphere — see I went to a statistician fight and a hockey stick broke out — and is currently being eviscerated in the original journal itself.  More on that shortly.