To tackle global warming, use an eyedropper or a bucket loader?

The red cube above on the left represents 400 ppm of carbon dioxide out of the million parts of air represent by the greater cube of one cubic meter of air.

The red cubes on the right represent the 500,000 watts/s of OTEC power generated by a single cubic meter of ocean surface over the course of the years  1955-2006 in the prime OTEC region as shown below in Figure 5-2 of the National Academy’s Evaluation of the U.S. Department of Energy’s Marine and Hydrokinetic Resource Assessments, chapter 5, Ocean Thermal Energy Conversion Resource Assessment. 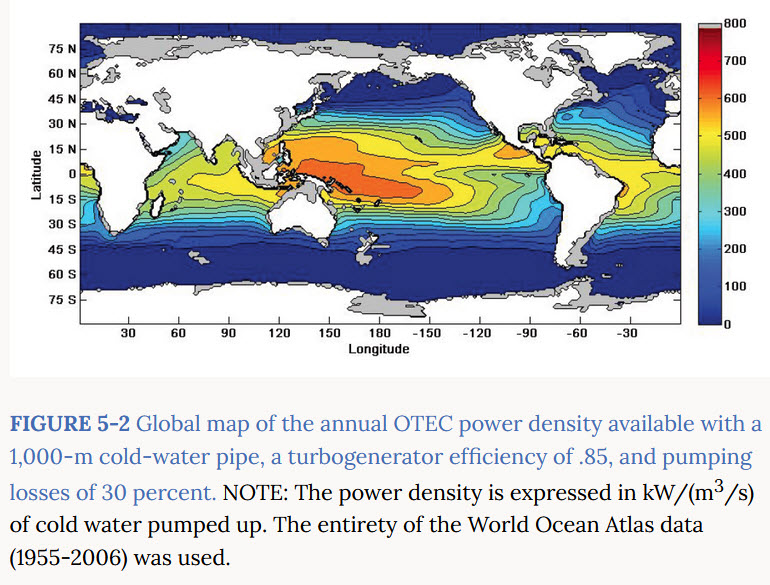 The legend for the upper figures is:

Howard Herzog, a senior research engineer at the MIT Energy Initiative and author of the book “Carbon Capture” says in the article that direct air capture is “very expensive because the CO2 in the atmosphere is only .04%” and the lower the concentration the more expensive the process of extracting it gets.

Wikipedia reports that the CO2 content of combustion-engine exhaust gases is about 14% or about 350 times ambient but it would be extremely difficult as well as costly to try to extract and collect exhaust gases from a moving emissions source.

Smokestacks from power plants have similar concentrations and ScienceDaily reported in 2008 that a Simple, Low-cost Carbon Filter Removes 90 Percent Of Carbon Dioxide From Smokestack Gases but 90 percent isn’t zero emissions. And the basis of the article was a paper,  Flue-Gas Carbon Capture on Carbonaceous Sorbents:  Toward a Low-Cost Multifunctional Carbon Filter for “Green” Energy Producers which says, “An abundant supply of low-cost CO2 from electricity producers is good news for enhanced oil recovery (EOR) and enhanced coal-bed methane recovery (ECBMR) operators, because it will lead to higher oil and gas recovery rates in an environmentally sensitive manner.”

In other words, this “so called” removal is instead a zero sum game and a costly exercise in green washing.

The key points of the CNBC article are:

There is, however, a significant economic incentive to deriving energy from the difference in temperature between the surface and deep waters in the tropical oceans and ejecting a slightly smaller amount of thermal energy into the cold seawater at a depth of 1,000 meters.

The national academy describes a different process whereby the slightly smaller amount of thermal energy is injected into cold seawater pumped from water depths of approximately 1,000 meters. The maximum possible Carnot thermal efficiency of this design is about 7% but the overall efficiency of a multi-megawatt-sized electrical power plant of the design, all inclusive from seawater to net electric power, is typically around 2% according to the paper OTEC Power Efficiency Challenges by Hurtt; Pellen and Nagurny presented at the Offshore Technology Conference of 2010 in Houston, Texas.

The paper, An Evaluation of the Large-Scale Implementation of Ocean Thermal Energy Conversion (OTEC) Using an Ocean General Circulation Model with Low-Complexity Atmospheric Feedback Effects  estimates the steady-state OTEC power maxima for this design is 8 to 10.2 TW.

The increase in efficiency comes from the fact there is half as much temperature loss through the heat exchangers, which are contiguous to the source of heat or in the condenser's case their heat sink. Plus, the weight of the vapor above it in a column of gas 1000 meters long compresses the gas, increasing its temperature and pressure.

And the costs for various plant sizes are shown below.

Which in all cases is less than the subsidized cost of fossil fuels and less than the lowest winning bid for solar electricity to  date which was €0.01114/kWh (or ~1.327¢/kWh).

Elon is a fan of Aristotle’s First Principles, the meaning  of which he says, ‘Okay, what are the material constituents of the batteries?’

“You just have to think of clever ways to take those materials and combine them into the shape of a battery cell, and you can have batteries that are much, much cheaper than anyone realizes,” he says.

This writer submits that Mr. Musk has missed Aristotle’s First Principle of global warming, which is it is a matter of thermodynamics. But as above, the cost is much cheaper than anyone ever bothered to work out.

Removing CO2 from ambient air or the oceans is like tackling global warming with a bunch of eyedroppers when we have to go at it by the bucket load. As in the 4 cubic meters per second of warm water "joined" by the 2 cubic meters per second of cold water with a temperature difference of 20C that has to be moved through the heat exchangers to produce a megawatt of power.

But more importantly, there has to be an economic incentive to embrace the solution, which in the case of Thermodynamic Geoengineering is, it is cheaper than the alternatives while addressing all of the environmental concerns of the other means of energy production.

In short, it is a moneymaker.

Negative-emissions OTEC (NEOTEC), consumes and stores (as dissolved mineral bicarbonate) approximately 5 × 106 tonnes CO2/yr for every gigawatt of energy produced. So, for 29 terawatts this is 125 billion tonnes of CO2/yr (125 Gigatonnes) of carbon sequestered and since the atmosphere has accumulated 1030 Gigatonnes it would take only 8 years to return the planet to its preindustrial atmospheric gas level of 280 parts per million. But there is a cost to the mining, crushing and delivery of the minerals required to remove CO2, therefore, like all other CDR schemes, it has to compete with all other priorities for funding.

So, to answer the question posed by the title of this piece, global warming has to be tackled by the bucket load because human nature dictates, we will always opt for the cheapest option. Which is the right one for the environment and mankind.

To not use the lowest temperature heat to attain energy equity is the ultimate moral hazard.