A stable atmosphere or a stable ocean? 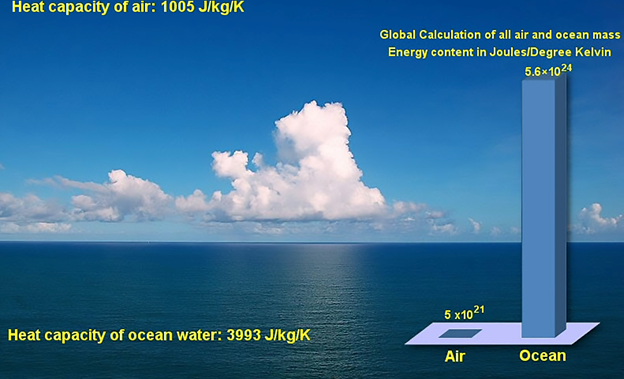 A recent study shows how global heating is making the world’s oceans more “stable” therefore less vertically mixed.  "Water near the ocean's surface is warming faster than the water below,” says Michael Mann, distinguished professor of atmospheric sciences and director of the Earth System Science Centre at Penn State.  "The same process, global warming, is both making the atmosphere less stable and the oceans more stable," he says.

Symptomatic of ocean stabilization is the slowing of the Atlantic circulation by about 15 percent since the middle of the last century.

The oceans are becoming increasingly thermally stratified because warm water floats and this stratification facilitates the conversion of a portion of the heat of warming to work in accordance with the first and second laws of thermodynamics. Ocean thermal energy conversion (OTEC) is one of the few non-polluting renewable energy technologies capable of delivering base load power. The one with the greatest potential that can double the output of fossil fuels, while eliminating the environmental cost of doing business associated with fossil fuels that the International Monetary Fund estimated in 2017 at $5.2 trillion annually.

Elon Musk likes to allude to Aristotle, who believed we learn more by understanding a subject’s fundamental principles and then reason up from there.

The UN’s justification for this codicil was a 2015 study produced by a team of researchers from the Department of Global Ecology, Carnegie Institution for Science, Stanford, that has been rebutted by the Natural Energy Laboratory of Hawaii Authority (NEHLA) and others, including this writer.

The Carnegie study used a model that boosted the background vertical diffusivity of the top 1000 meters of the ocean by a factor of 600, which is physically impossible. Their model altered diffusivity everywhere, while OTEC can only be developed in selected tropical areas, over about 20 percent of the ocean. Moreover, the magnitude of the vertical diffusivity would preclude the production of OTEC power anywhere since the vertical temperature difference available in the disrupted thermocline is only a few degrees whereas a temperature differential of 20 degrees Celsius between the surface and the depths is required.

NEHLA is researching an OTEC approach that is forty percent as efficient as Thermodynamic Geoengineering, thirty three percent more costly, and produces the regional heterogenous effects the UN warns of. It also claims, “Owing to the very low thermodynamic efficiencies of OTEC cycles, an assumption that the overall OTEC process does not remove heat from the ocean is made,” which doesn’t accord with the laws of thermodynamics. A conversion of ocean heat to work performed on land is, by definition, an extraction of heat from the ocean and the only way that heat can be safely extracted from the ocean.

NEHLA has, however, shown that the termination risks of OTEC are unfounded.

Thermodynamic Geoengineering is neither temporary nor heterogenous. It overcomes buoyancy with a heat pipe that moves heat through the phase changes of a low-boiling working fluid. The heat capacity of the ocean is three orders of magnitude greater than the capacity of the atmosphere. To keep the heat of warming within the tropics and yet cool the surface, the 1.2 degrees of surface warming that has occurred to date would have to be diluted 100,000 percent in deep water. This would use only a tenth the ocean’s surface therefore 10 times the 100,000 percent dilution would be required.

In a 2012 paper Sydney Levitus et al. estimated if all the ocean heat accumulated between 1955-2010 to a depth of 2000 meters was immediately release into the atmosphere, the temperature of the atmosphere to a height of 10 kilometres would be warmed 36 degrees Celsius. The only thing that prevents this from happening is greenhouse gas that conventional wisdom says we should be drawing down as rapidly as possible. A paper co-authored by this writer and Greg Rau, a senior researcher with the University of California, Santa Cruz, Institute of Marine Sciences, estimated for each gigawatt (GW) of continuous electric power generated by Negative-Emissions OTEC (NEOTEC), roughly 13 GW of surface ocean heat would be directly removed from the surface, while producing 130,000 tonnes of hydrogen a year (avoiding 1,100,000 tonnes of CO2 emissions a year), and consuming and storing (as dissolved mineral bicarbonate in the ocean) approximately 5,000,000 tonnes CO2 a year.

About 1000 gigatons of CO2 has been accumulated in the atmosphere to date as a result of fossil fuel burning. Global warming has added between 350 and 384 TWh annually, which, at 7.6 percent conversion rate amounts to between 26.6 and 29.2 TWe.

The 7.6 percent efficiency figure was arrived at by the Los Alamos National Laboratory theoretical physicist Melvin Prueitt with the aid of a computer program otec.exe in a 2007 US patent filing that described a system similar to Thermodynamic Geoengineering. AT 26 TW, 130 gigatons of CO2 can be sequestered annually so, in less than 8 years, the total inventory of accumulated CO2 emissions can be isolated in the ocean, but this doesn’t solve the problem of global warming. In fact, it might exacerbate it. The 36 degrees of warming that accumulated in the ocean to 2010, plus the heat added the last 10 years, plus the heat that will be added between now and when 26 TW of OTEC power is fully built out, would then have an unencumbered path to the atmosphere.

The diffusion rate of water from the depths to the bottom of the mixed layer of the ocean – roughly the top 100 meters – is about 1 centimetre a day or about 4 meters a year. Heat moved a kilometre down therefore diffuses back to the bottom of the mixed layer in about 225 years. Then moves through the mixed layer at a rate of about a meter a day so, in total, heat sequestered in the ocean is back on the surface in about 225.3 years. Where, to prevent excessive warming, the heat will have to be recycled back to deep water to produce more work.

The movement of heat into deep water would strengthen thermohaline circulation.

Given the 7.6 percent efficiency rate for the conversion of this heat, it will take 13 cycles of 225.3 years, or about 2,930 years to recycle and convert and all of the heat of warming to work and to safely let the waste of heat of those conversions dissipate to space (neither of which are temporary nor heterogenous).

With the conventional OTEC design studied by NEHLA, the heat of warming never moves deeper than the mixed layer and resurfaces in a few months, which is why the approach allows the heat of warming to move rapidly to the poles, provides no respite from warming, and gives rise to erroneous notions like “the overall OTEC process does not remove heat from the ocean.”

Elon Musk has pointed out, “Somebody could say, in fact people do, that battery packs are really expensive and that’s just the way they’ll always be, because that’s the way they’ve been in the past.” But you just have to think of clever ways to take materials and combine them into the shape that are much, much cheaper than anyone realizes, he says.

A lot more energy is packed into a cubic meter of the tropical ocean than reaches its surface. The top 2.5 meters of the ocean holds as much heat as the entire atmosphere above it. To stabilize the atmosphere, we must move surface ocean heat into deeper water and convert a portion of that heat to the energy needed to sustain 10 billion people by 2050. For example, it takes 100,000 square miles of solar panels to produce 18 TW whereas it takes only 10,477 square miles of the ocean’s surface to produce 29 TWs of power from Thermodynamic Geoengineering therefore it is cheaper than solar, requires no storage and harvests 80 percent of this area with OTEC power and 20 percent from the waves, wind and solar power.

Bill Gates, and others are looking for the energy miracle veiled in the principles of thermodynamics that lead to twice the energy of fossil fuels while stopping sea level rise, reducing storm surge, wildfires, drought and ocean acidification in the course of cooling the planet, and improving localized environmental impacts.

The answer to the question posed by the titled of this piece is, to stabilize the top 10 kilometers of the ocean and the fate of humanity, we have to destabilize the top kilometer of the tropical ocean surface.