The solution to global warming! 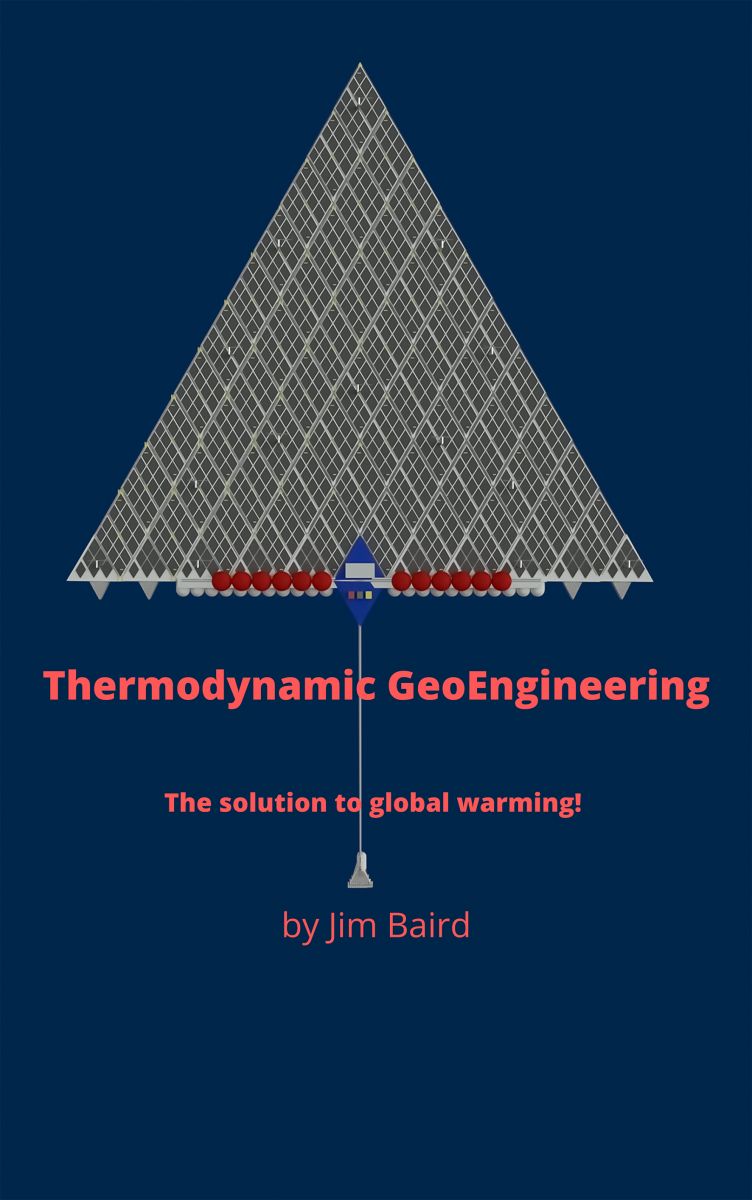 A planet that runs on water has been the dream of mankind for centuries and the nightmare of the fossil fuel and nuclear power industries.

Thermodynamic geoengineering (TG) turns the dream into a reality. About 93% of the heat of global warming is going into the ocean, making it increasingly thermally stratified. This stratification is like a thermal dam 326 metres high straddling the breadth of the tropics that is accumulating greater height every year.  TG converts a portion of the heat of warming in heat engines to produce twice the energy being derived from fossil fuels. to a depth of 1,000 meters, whence it gradually returns to the surface and until all the heat has and the waste heat of the energy conversion to space. A process that provides close to 3,000 years of constant, sustainable, power.

The loss to space by the conversion of electricity in an electrochemical process that produces hydrogen, consumes carbon dioxide and neutralizes ocean acidity. In as little as 7 years, at full power, in the depth of the oceans with the two processes that also cool the surface and reduce sea level rise and storm surge.

Although some are calling for reduced energy consumption as the solution to global warming, the reverse is true. The more energy produced by TG and converted to hydrogen by the electrochemical process, the more greenhouse gas , and .

The late Richard Smalley, Nobel laureate in Chemistry, in his 'Terawatt Challenge' pointed out, “To give all 10 billion people on the planet the level of energy prosperity we in the developed world are used to, kilowatt-hours per person, we would need to generate 60 terawatts around the planet—the equivalent of 900 million barrels of oil per day.” And that this energy the next nine items on his list of the top 10 issues facing mankind.

The politicians tell us we still have a few years until we into the climate tipping points, but our carbon budget .

The energy produced by these processes is too cheap to metre because it costs less than fossil fuel subsidies and the environmental cost of doing business. It is also, hands down, at a minimum third the existing record low price for solar energy, the cheapest energy available.

A viable, pollution-free, no- energy source has been the persistent dream throughout the ages. The fact it has never has spawned countless conspiracy theories about governments, corporations, and special interest groups suppressing nascent endeavors, which it turns out are true.

Politicians and policymakers who condone the gouging of the electorate with energy prices that are twice what they should be, while depriving the electorate of twice the environmental benefit they deserve, aren’t worthy of their office nor their place in society.

For further details, the book is available on Amazon.

"The politicians tell us we still have a few years until we start running into the climate tipping points, but our carbon budget is actually already blown."

Yeah—I don't get this, either. Reminds me of Scott Morrison (Australian Prime Minister) saying that he's opened the door to “evolving” the government’s policy on climate change in the future.

The level of scientific ignorance (wilful or otherwise) and political cowardice shown by certain politicians is just infuriating. Doesn't help when big oil gets them in office.

I think part of the problem is that the crisis will extend beyond any politician's individual term and it's been such a group failure that there's not even an issue with these politicians worrying about their legacy being the 'one' that failed to act. If a leader who's term is 2015-2020 or something similar sets a mandate that we switch to XX% clean energy by YY date, and that YY date is a decade or two or more after they are out of office, they get to look like they did something to help the problem but they hold no accountability in getting it done. Then when it comes time for their successors to get things done, the buck can be passed further on, claims can be made that the first mandates weren't nuanced or correct enough, etc.

This is why international agreements on climate are so critical-- it can't be about one administration or one country, this is in its definition a global problem that needs a global solution

This is so true. Humans are inherently poor at managing intergenerational projects. I agee that having international agreements will make it much harder for future governments to get away from important agreements. After all, climate change affects the entire planet.

True, but I have eight grandchildren. The not on my watch sentiment does nothing to help them. My goal is to provide for their future not some GD politician's.