Environmental Protection Agency Administrator Scott Pruitt’s ethical lapses and extravagant spending habits have distracted the public from what he is doing to roll back important environmental protections.

Pruitt helped persuade President Donald Trump to withdraw from the Paris climate accord, making the United States the only country in the world to reject the pact. At Trump’s urging, Pruitt has moved to repeal the Obama administration’s Clean Power Plan and EPA rules clarifying federal jurisdiction to protect wetlands.

He also plans to scrap national fuel economy standards the auto industry once embraced. And he sought to suspend regulation of methane leaks from new oil and gas wells, but was overruled by a federal court.

And Pruitt’s agenda extends far beyond simply rolling back Obama administration initiatives. In a memo to EPA staff on May 9, 2018, Pruitt ordered significant changes in the process for setting air quality standards under the Clean Air Act, in the name of “cooperative federalism and the rule of law.”

These standards are the heart of what has been the most successful environmental law in history. According to the EPA’s own estimates, the Clean Air Act saves thousands of lives every year and generates net benefits to society that are vastly larger than the costs of complying with it.

But the law is now under attack from the very agency charged with implementing it. Pruitt seeks to undermine the scientific basis for the EPA’s national air quality standards by changing who advises the EPA, restricting the data they can use, and requiring them to shift their focus away from protecting public health. EPA’s estimated benefits and costs of the Clean Air Act from 1990-2020. About 85 percent of benefits are attributable to avoided premature deaths associated with reductions in particle pollution. USEPA

The Clean Air Act has reduced air pollution so effectively that even Pruitt acknowledges its success. U.S. air quality standards are the reason why our air is not like China’s, where air pollution kills an estimated 1.6 million people each year.

The Clean Air Act has succeeded because it requires air quality standards to be based solely on what science shows is necessary to protect public health. The law directs the EPA administrator to consult with “an independent scientific review committee” known as the Clean Air Scientific Advisory Committee (CASAC). This committee summarizes what science shows about the impact of various levels of air pollution on public health and welfare.

The EPA is scheduled to complete reviews of standards for ozone and particulate matter by the end of 2020. According to the American Lung Association, more than 4 in 10 Americans still live in areas with unhealthy levels of ozone or particle pollution. Since 1980, combined emissions of six common air pollutants have dropped by 67 percent. Meanwhile, the U.S. economy continued to grow, Americans drove more miles and population and energy use increased. USEPA

Pruitt’s memo expands CASAC’s charge to include advice on any adverse “economic” or “energy effects” of emission control measures – even though the law does not allow such factors to be considered during the standard-setting process. In Whitman v. American Trucking Associations, Inc. in 2001, the U.S. Supreme Court unanimously declared that the text of the Clean Air Act “unambiguously bars cost considerations from the [standard]-setting process.”

In that case, industry litigants sought to persuade the court that air quality standards should be based on cost-benefit analyses. But the court, in an opinion by the late Justice Antonin Scalia, unanimously rejected that argument, stating:

“[C]ost of implementation … is both so indirectly related to public health and so full of potential for canceling the conclusions drawn from direct health effects that it would surely have been expressly mentioned in [the law] if Congress meant it to be considered.”

The court declared that if it could be proved “that the EPA is secretly considering the costs of attainment without telling anyone,” this would be grounds for striking down the standards “because the Administrator had not followed the law.” 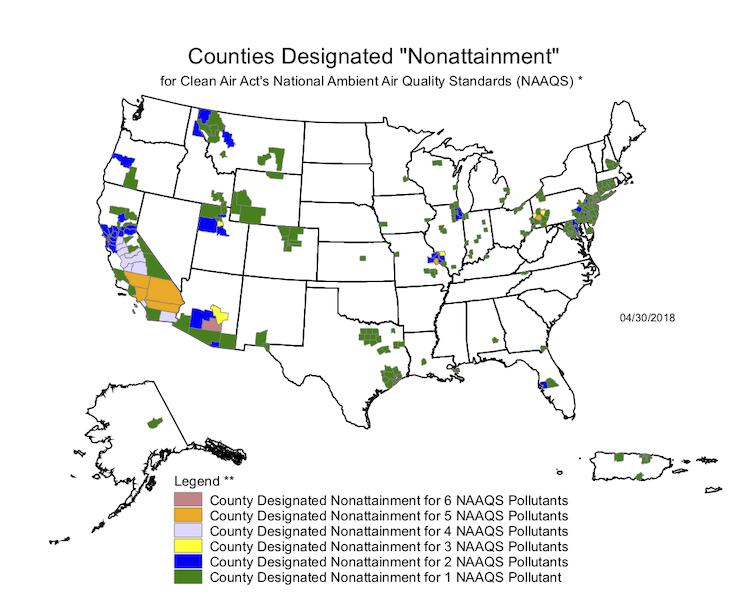 Counties that currently fail to meet standards for at least one of six air major pollutants. USEPA

Pruitt’s memo pays lip service to the notion that compliance costs are not relevant to standard-setting, while requesting “robust feedback” on adverse effects of implementing air quality standards. He also wants CASAC to emphasize scientific uncertainty and research on naturally occurring air pollution, harkening back to President Reagan’s famous claim that “trees cause more pollution than automobiles.”

Even if Pruitt follows the law, his memo’s emphasis on compliance costs, uncertainty and “background” levels of air pollution suggests that he is laying the groundwork for undermining existing air quality standards.

Toward this end, Pruitt wants to make significant changes to the EPA’s sources of scientific advice. His memo emphasizes that new members of CASAC review panels must be selected in accordance with his October 31, 2017 directive, disqualifying experts who receive research funding from EPA – but not experts employed or funded by industry groups.

Pruitt’s action responds to an April 12, 2018 memorandum from President Trump directing EPA to speed up permitting of air pollution sources, and to grant states more flexibility in meeting air quality standards. But if the administration truly was serious about speeding up implementation of the act, it would not be proposing to slash the EPA’s FY 2019 budget from $8 billion to $6.1 billion and shrink the agency’s work force from 15,400 to 12,250.

When Congress last amended the Clean Air Act in 1990, it did so by overwhelming bipartisan majorities of 89-11 in the Senate and a voice vote without objection in the House. These amendments strengthened air pollution control measures while creating an innovative market-based emissions trading program that experts widely view as a success.

President Trump has abandoned his campaign promise to abolish the EPA, but his EPA administrator is on a slash and burn expedition to roll back crucial environmental protections. This effort reflects profound distrust of the science that underpins U.S. environmental policies and profound disregard for millions of Americans who still live in areas with unhealthy air.

By Robert Percival, University of Maryland

Robert Percival is Professor of Environmental Law at University of Maryland.