The transition to electric vehicles (EVs) is picking up speed—good news for manufacturing in the United States, which led the world in EV exports until last year, when Germany seized the top spot. Just as the U.S. was losing its early advantage, global EV sales surged. The American Jobs Plan (AJP) would re-establish the U.S. as the world’s top EV exporter, creating millions of jobs. To fully capture this opportunity, we need all of the EV, battery, and manufacturing elements in the AJP.

Exports are an important driver of growth in manufacturing employment, offering well-paid jobs that usually do not require a college degree. Exports directly employ 10 million Americans, including 36% in manufacturing—about four times greater than the 9% share for the U.S. economy overall. Two recent studies—one from the Analysis Group and a second by Keystone Public Policy Economics—indicate that full implementation of the AJP’s strategy, plus vehicle standards, would generate more than 200,000 manufacturing jobs, plus more than 400,000 other jobs by 2025. 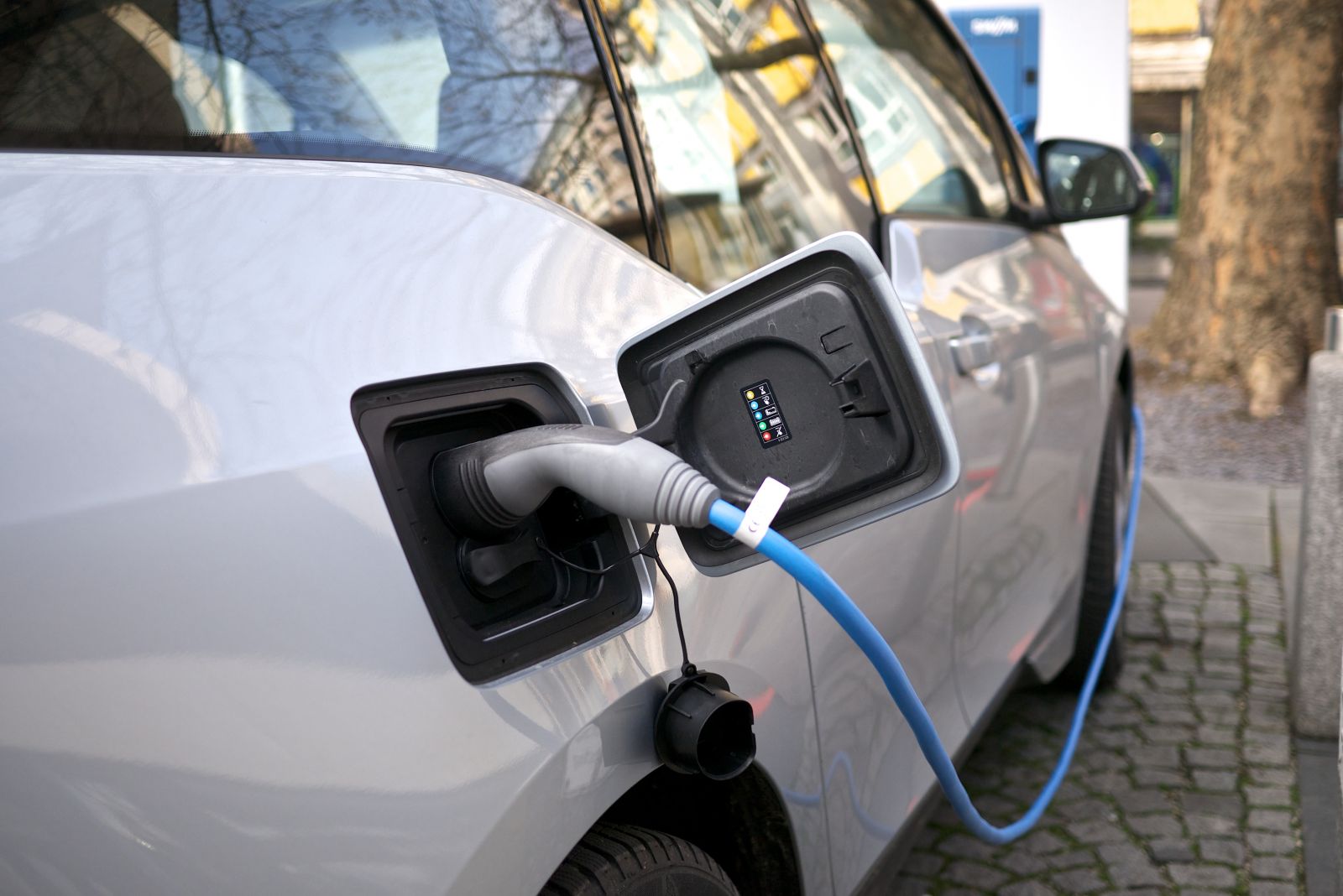 The AJP will grow manufacturing jobs across the entire EV supply chain, from raw materials to parts, with an emphasis on batteries. The plan also invests in training to prepare workers for the increasingly sophisticated manufacturing sector, while offering grants and loans to upgrade and retool factories. The AJP prioritizes developing domestic manufacturing to meet EV demand at home, which is a prerequisite for long-term export success. To grow the U.S. market, the plan combines investments in charging infrastructure and consumer incentives. Altogether, these policies are the complete strategy we need to restore our global EV leadership and grow high-quality jobs.

How America lost its lead in EV exports

The international trade systems first began tracking EV-specific data in 2017. The U.S. led in the value of EV exports for the first three years, with exports more than doubling in value to nearly $8 billion. Then, in 2020, Germany took the lead, setting a new high-water mark of $8.5 billion in exports.

Stronger and growing demand for EVs in Europe and China has also boosted American EV exports. Since 2018, demand for new EVs in China has exceeded 1 million units annually. The European Union bested China for the lead in domestic sales in 2020 for the first time, with 1.4 million EVs sold. Meanwhile, new EV sales in the U.S. have plateaued in the 300,000 – 400,000 range per year, including plug-in electric hybrids

The export market shares of automakers based in Europe and Asia are trending upward, and it is no mystery why. Policymakers in these countries are actively steering their markets toward EVs through public investments and government regulations. By adopting smart policies now, America is well positioned to grow EV exports and manufacturing jobs and reclaim the top spot—but without concerted action, the U.S. is likely to fall further behind in the race to be the world’s top EV manufacturer.

The confluence of several trends explains the growing momentum behind the EV transition. First, there is growing recognition of the immense public health and climate benefits of electrified transport. Further, rapid technological progress, particularly in batteries, has been a game changer. EV battery costs have fallen 89% since 2010.

Growing government support and well-designed regulations guiding the market toward electrification are also key. Seventeen countries, making up most of the European market, have committed to eliminating combustion engine vehicles in the next 15 to 20 years. China’s new car market, the world’s largest, is governed by a zero-emission vehicle policy modeled on California’s and requires at least 50 percent EV sales by 2035. It is likely to be strengthened as a result of China’s recent net-zero carbon pledge.

The ultimate driver of the momentum behind the electric transition is growing consumer enthusiasm. Even as the pandemic caused car sales to drop overall last year, EV sales grew from 2 million to 3 million cars. As another measure, EVs as a share of global new car sales jumped from 2.5% in 2019 to 4.4% in 2020. Indicative of these converging megatrends, the investment bank UBS predicts “an EV share of 20% [of global new car sales] in 2025, and a 50% share in 2030.”

The AJP’s strategy for winning the global market and capturing quality jobs addresses both the supply and demand sides of the market. On the supply side, the plan targets both labor and capital readiness through worker training and support for factory investments to create the requisite productive capacity. Demand-side policies are also necessary. Decades of empirical studies show that building up a domestic market is a necessary precursor to export success. Economists call this the home market effect.

The plan’s EV strategy will also boost domestic EV demand by investing in charging infrastructure and consumer incentives. Increasing public availability of charging will be a linchpin of mainstreaming EVs. The Plan aims to build 500,000 vehicle chargers over a decade, subject to living wage and other labor standards.

Consumer incentives are important because, though EVs have lower overall ownership cost as a result of fuel and maintenance savings, they do still carry some additional upfront cost. Prospective EV buyers have pointed to this higher purchase price as a key hurdle, making the AJP’s point-of-sale incentives for EV buyers vital, even if just for the short term.

The need for consumer incentives should be time-limited because EV purchase prices are expected to fall below conventional vehicle purchase prices in a matter of just a few years. The International Council for Clean Transportation has projected new EVs will be less expensive to purchase than comparable gas models by 2024 for compact cars and by 2027 for SUVs. And costs are falling faster than expected: “In 2017, a Bloomberg New Energy Finance analysis forecast that the crossover point was in 2026, nine years out. In 2018, the crossover point was in 2024—six years out. The crossover point, per the latest analysis, is now 2022 for large vehicles in the European Union. For that, we can thank the incredible shrinking electric vehicle battery, which is not so much shrinking in size as it is shrinking—dramatically—in cost.”

With an eye to the long term, the AJP also includes investments in technological innovation, funding transformative research and building up the nation’s scientific infrastructure. Fundamental scientific and engineering research and development investments are essential to boosting productivity and will fuel sustainable growth. These investments have paid off in the past and will again.

U.S. export success has, so far, depended on Tesla, but many U.S. automakers and suppliers are ready to capitalize on the AJP’s billions in capital and R&D investments to accelerate EV manufacturing and exports. Ford is riding a wave of enthusiasm, fueled by its new electric offerings, the F-150 Lightning pickup truck and Mustang Mach-E . On the same day that Ford promised 40% of its sales will be EVs by decade’s end, the company’s stock price reached its highest level in nearly five years. Not to be outdone, General Motors has committed to entirely quitting tailpipes, i.e., eliminating internal combustion engine vehicles, by 2035, and is building battery cell factories in Ohio and Tennessee. American companies are pushing the envelope in battery innovation, with the next generation of technology coming into focus.

These advantages and the strength of U.S. science and engineering bode well for American prospects, but smart public policy remains essential. With a complete policy strategy—including pro-manufacturing policies, job training to support and prepare workers, and EV deployment and innovation investments—the U.S. will be well-positioned to win the global EV market.

Advances in EV technology for cars and trucks and buses, coupled with growing global demand, are creating new economic opportunities. We must be ready to seize them or be left in the dust. The AJP’s EV strategy is foundational for capturing 21st century manufacturing jobs in EVs as well as other clean technologies and opening new on-ramps to the middle class and the American Dream. But we will lose these advantages without smart public policy. Congress must seize this narrow window of opportunity by fully adopting the EV and manufacturing strategy embodied in the American Jobs Plan.

Just back Tesla. They are the world leader. Their Semi truck and Cyber truck will just ahead soon. They make the best batteries. When their new model 2 C Compact will beat all Electrics in sales soon.

To be fair, it behooves both the U.S. economy and the general EV movement to have a diversity of EV providers out there, not going all in on just one. Tesla moved the needle like no other before it, but we're lucky that now that's paved the way for numerous other EV manufacturers

Very true. Tesla has shown the way. They have taken market share away from the big automakers. That is the best incentive. So why did we take away the incentive from the best Tesla and Chevy.