Powering the planet with hurricane fuel. 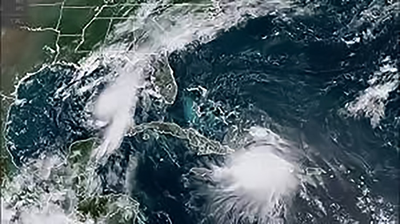 The Smithsonian posed the question,  “Can We Capture Energy From a Hurricane?” in a 2016 article subtitled, “Loaded with power, massive storms may be another conduit for renewable energy.”

“In terms of energy stored and released, hurricanes pack a huge punch. Your “average” tropical cyclone might release the equivalent of 600 terawatts of energy, with a quarter of a percent of that as wind; the vast majority of the energy in a hurricane is in the form of heat stored and released as water vapor condenses into rain,” they said.

The article then focused on the .25% of the energy of the hurricane that produces wind that it suggested is a gold mine of clean energy and PowerBuoys that can temporarily generate and store from between 44 and 150 kilowatt hours as the storms pass.

Hurricanes form over tropical waters between latitudes 8 and 20-degree higher than the equator. They require high humidity, light winds, and sea surface temperatures of 26.5oC or greater like those shown in the following graphic from TropicalTedbits.com. 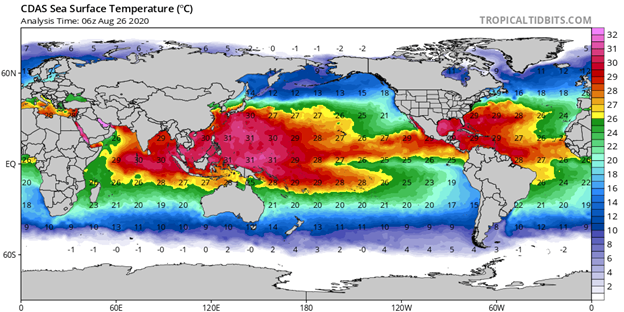 This surface heat produces evaporation that causes water vapour to rise that eventually condenses into the rain that releases the heat of the storm. Storm clouds can reach as high as 16 kilometres and the higher the vapour rises, the more heat is released and the more intense is the storm.

There is nothing in Nature that can compare to the force of a hurricane whose winds of up to 250 kilometres or greater can annihilate coastlines and can release over 30 times the annual energy consumed by humanity.

A hurricane's path is miles wide and meandering but the surface ocean heat that produces the storms is constantly available within the Intertropical Convergence Zone characterized by cloudiness and heavy precipitation but where hurricanes, typhoons and cyclones do not form.

Devices like the following can harvest this heat as well as the wind, wave, ocean current and solar energy that contact or flow above and below the thermodynamic geoengineering energy platform. 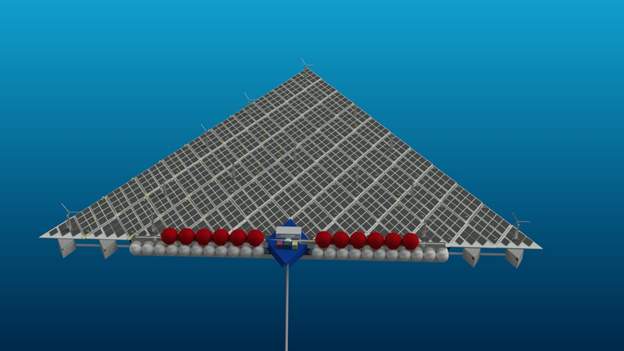 The triangular energy island shown above has equal sides of 735 meters, consisting of 55 interconnected rhombuses 73.5 meters a side and produces 200 megawatts of ocean thermal energy conversion power by boiling a low-boiling-point working fluid in the 22 heat exchangers at the bottom of the graphic and 50 megawatts from the other sources.

The following shows a rhombus with a windmill and solar panels and the underside of another where wave intensifiers collect the wave energy.

By doubling the length of each island to 1.47 kilometers, their output can be quadrupled to one gigawatt of renewable power.

Instead of ignoring 99.75% of the energy potential of hurricanes, we need to capitalize on it with thermodynamic geoengineering.

Although the energy potential of a single hurricane may be 600 terawatts, global warming is accumulating only between 350 and 390 terawatts a year, and this doesn’t have to be converted over the course of a few days.

Instead, it can and should be harvest 365/24 at an efficiency of 7.6% and the balance sequestered in deep water with the deep-water condensers and equipment shown below. 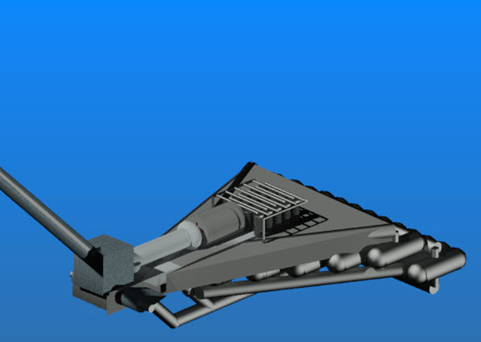 A single 250 MW thermodynamic geoengineering platform with a frontage of 735 meters travelling at 2 knots powered by energy produced by the platform can harvest 28,000 kilometers of the ocean’s surface in 316 days (the circumference of the ocean at equator is  40,075 kilometers and 70% is ocean).

Each degree of latitude is approximately 111 kilometers therefore the width of the Intertropical Convergence Zone is about 2,220 kilometers so, about 3,020 250 MW platforms could operate side by side to harvest the heat that can otherwise produce hurricanes. As shown below it would take 116,000 of these 250 MW plants to process all the heat of global warming so the transits of these platforms should be interspersed over 38 intervals of about 8 days. 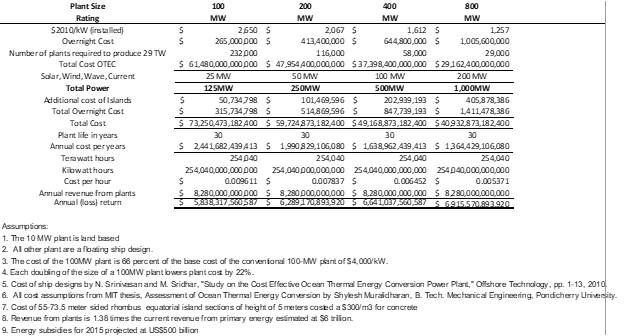 As the table shows, not only is this energy cheaper than existing sources, it addresses virtually every one of their environmental concerns.

In short, we are missing out on the golden renewable energy opportunity presented by energy that otherwise is powering hurricanes.

"It is well known that a warm ocean favors the development of hurricanes. Less well known is the fact that the passage of a hurricane over the ocean can cause the upper ocean to cool substantially, which can influence subsequent hurricane development. In late summer 2005, the extremely warm sea surface temperatures in the Gulf of Mexico fueled two powerful Hurricanes: Katrina and Rita. According to data from NASA's Tropical Rainfall Measuring Mission (TRMM) satellite, each of these storms cooled water temperatures more than 4 degrees Celsius in places along their paths, and cooled the entire Gulf by about 1 degree. The Gulf was so warm, however, that water temperatures quickly rebounded, and remained high enough to support hurricanes until well into the middle of October."

There is no such temperature rebound when the heat is sent below the thermocline into deep water. At least not for 226 Years.

This seems like the type of moonshot that might raise some people's eyebrows as crazy, but sometimes you need to lean into crazy to innovate I suppose! If the numbers are there that would make this a compelling idea to work on, do you know what's stopping the development of the tech?

In your words, too few are prepared to lean into crazy. The majority are complacent and are where the votes are.

Jim, it has nothing to do with complacency. It has to do with wasting valuable money and time on something with little possibility of paying off.

Nuclear will pay off?

Nuclear plants are cooled by water, and in times of intense heat and drought, water resources can become either too warm or too scarce, forcing shutdowns.

When water that is abundant is too warm the heat needs to be put to work and transferred some place cooler.

That  place can't be the poles.