The Guardian reports that modeling by 20 institutions for the sixth assessment by the United Nations Intergovernmental Panel on Climate Change due to be released next year suggests climate is considerably more sensitive to carbon emissions than had been originally thought. And that worst-case global warming scenarios may need to be revised upwards in light of a better understanding of the role of clouds.

The data suggests, compared with the last IPCC assessment in 2014, 25% of the models show a sharp upward shift in climate sensitivity from 3C to 5C that shocked many veteran observers, because assumptions about climate sensitivity have been relatively unchanged since the 1980s.

It should be noted, over a year ago it was report on these pages that 5 degrees was the more likely figure for climate sensitivity. And that even earlier than that, The UN Joint Group of Experts on the Scientific Aspects of Marine Environmental Protection (GESAMP) report High Level Review of a Wide Range of Proposed Marine Geoengineering Techniques acknowledged that thermodynamic geoengineering, would cool the ocean’s surface and could reduce warming associated with climate change.

Johan Rockström, the director of the Potsdam Institute for Climate Impact Research, said in the Guardian, “Climate sensitivity is the holy grail of climate science. It is the prime indicator of climate risk. For 40 years, it has been around 3C. Now, we are suddenly starting to see big climate models on the best supercomputers showing things could be worse than we thought.”

He said climate sensitivity above 5C would reduce the scope for human action to reduce the worst impacts of global heating. “We would have no more space for a soft landing of 1.5C [above preindustrial levels]. The best we could aim for is 2C,” he said.

Jonathan Watts, the Guardian's global environment editor says, “The role of clouds is one of the most uncertain aspects of climate science because they are hard to measure and, depending on altitude, droplet temperature and other factors, can play either a warming or a cooling role. For decades they have been the focus of fierce academic disputes.

Previous IPCC reports tended to assume that clouds would have a neutral impact because the warming and cooling feedbacks would cancel each other out. But in the past year and a half, a body of evidence has been growing, showing that the net effect will be warming. This is based on finer resolution computer models and advanced cloud microphysics.”

Timothy Palmer, a professor in climate physics at Oxford University and a member of the Met Office’s advisory board, says “Clouds will determine humanity’s fate – whether climate is an existential threat or an inconvenience that we will learn to live with. Most recent models suggest clouds will make matters worse.”

The following is an adaptation of the Earth's Energy Budget from Chapter 2: Physical Drivers of Climate Change, of The Climate Science Special Report of the Fourth National Climate Assessment (NCA4), the U.S. Global Change Research Program. 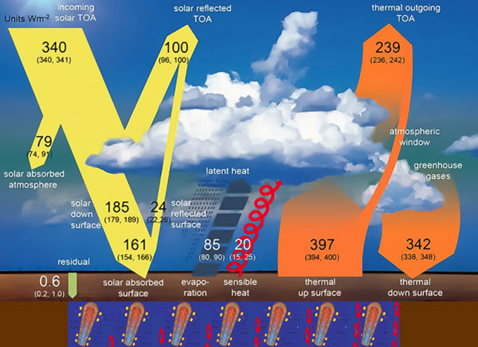 Clouds are a manifestation of the latent heat of evaporation and the sensible heat radiating from the surface that can add as much as 7%  more moisture to the atmosphere for every 1C of warming but this heat can be more effectively relocate to deep water with the heat pipe shown below. 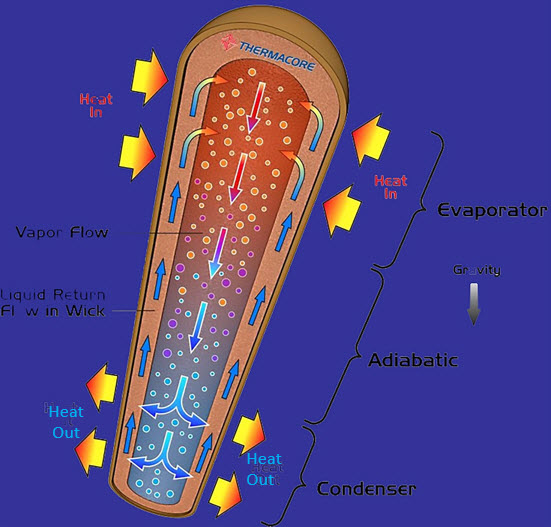 The heat transfer of the heat pipe occurs at about the same speed as the evaporation of water from the surface but is the result instead of the boiling of a low-boiling-point working fluid and then condensation of the resultant vapor in deep water. Between the evaporation and condensation, a heat engine can be inserted that can convert a portion of the latent heat of evaporation of the working fluid to work. The “heat out” then becomes “sensible heat” that warms the surrounding deep water, which becomes buoyant and rises back to the surface at a rate of about 4 meters a year where it can be recycled.