Few climate proposals have been politicized more than the Green New Deal, although it is essentially a jobs program intended to put people to work fighting climate change – regardless of their political affiliation. But as oil and gas jobs have shriveled up amid the COVID-19 recession, a green jobs proposal has become incredibly popular among Republicans and Democrats: plugging abandoned oil and gas wells.

More than 100 years of drilling have left 3 million abandoned oil and gas wells across the United States, and more than 2 million of them are “unplugged” according to the U.S. Environmental Protection Agency. Far from mere eyesores or local environmental hazards, these abandoned wells gush millions of metric tons of methane – 84 times more potent than carbon dioxide over a 20 year timeline – and plugging the wells can cut these emissions 99%.

Several Republican-led states have created programs to cap abandoned wells, putting laid-off oil and gas employees back to work, and a federal program to tackle the problem could create hundreds of thousands of jobs that slow climate change while preventing carcinogen leakage into local communities. This concept is part of Joe Biden’s campaign platform, was included in an infrastructure bill passed by the House of Representatives in July, and is being pushed by a coalition of 31 U.S. oil-producing states.

With such widespread support, this win-win idea once again shows how policies reducing greenhouse gas emissions can create jobs without being politicized.

The fracking boom is going bust, abandoning workers and wells in its wake

America’s oil and gas sector had already fallen on hard times before the pandemic, undercut by plunging prices and rising debt incurred during the fracking boom, with nearly 40 producers declaring bankruptcy in 2019. Then came COVID-19, which cut oil demand 11% over the first half of 2020, spurring fears of “extraordinary” demand destruction if COVID-19 cases surge in the fall.

As a result, thousands of oil and gas wells have been idled, leading to more than 100,000 workers being laid off since the end of February, with those left on the job facing pay cuts of up to 10% through 2021. Oil and gas bankruptcies are up 62% this year compared to 2019, and researchers estimate more than 70 oil and gas companies could go bankrupt in 2020, with an additional 170 folding in 2021.

The number of abandoned wells increased 12% across the U.S. since the fracking boom began in 2008, and that number will likely surge as bankruptcies rise. BP recently declared peak oil may have occurred in 2019, with demand never to recover, meaning this wave of bankruptcies could push tens of thousands of now-idled wells to become permanently-abandoned wells.

Because state programs have indirectly subsidized oil and gas drilling for years by allowing companies to set aside funds for the future estimated cost of capping wells, sufficient funding usually doesn’t exist to retire and plug wells left behind by bankruptcy.

The current amount oil and gas companies must set aside is based on traditional oil wells, with an average cost of $20,000-$40,000, but actual expected costs to retire fracked wells is closer to $300,000, according to Carbon Tracker. The issue is even worse on federal lands, where drillers are only required to set aside $10,000 for a single well and a maximum of $150,000 for all wells drilled nationwide.

The U.S. Government Accountability Office pegs the total cost of plugging every abandoned well across the country at up to $435 billion, meaning oil and gas companies facing declining demand and unstable financial futures may not have enough revenue and savings to pay well retirement obligations. 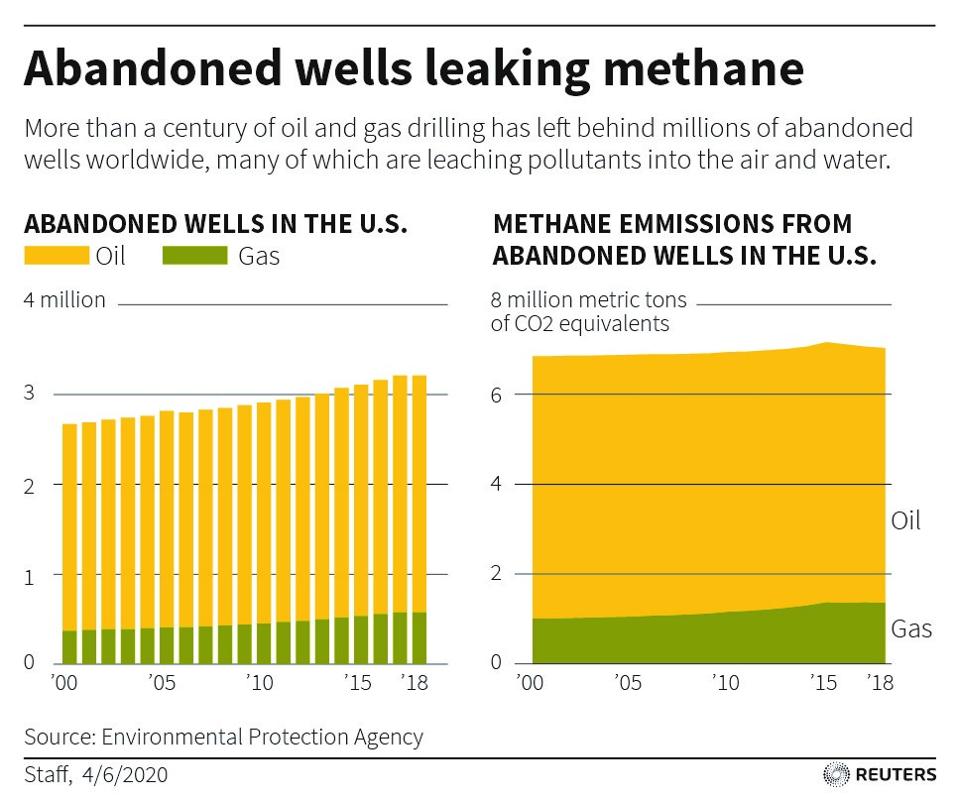 Global atmospheric methane levels have risen dramatically since the fracking boom began, increasing roughly 25 million tons from 2008-2014, with the increase matching the chemical signature of shale oil and gas. “This recent increase in methane is massive,” said Cornell University professor Robert Howarth. “It’s contributed to some of the increase in global warming we’ve seen.”

A flood of new abandoned wells leaking methane will only worsen this problem, adding thousands of unplugged methane emitters across the country.

We need a federal program to plug abandoned wells, for climate and the economy

But while the oil and gas industry can’t afford to plug all its wells, and states on their own can’t afford to tackle the entire problem, the federal government can. Considering at least 100,000 oil and gas well workers are out of work and the federal government spent $3 trillion on a first round of COVID-19 stimulus, $435 billion to plug abandoned wells using out-of-work employees who know how to do the work appears relatively modest.

In May, the Interstate Oil and Gas Compact Commission (IOGCC), which represents oil and gas regulators from 31 states, proposed the Trump administration enact a federal well cleanup program using funding from the federal stimulus package. A 2019 report from IOGCC proposed amending the Oil Pollution Act to direct funding to plugging abandoned wells across 30 states, but this proposal was never acted upon.

Environmental organizations have also endorsed the proposal at various levels of effort. The Center for American Progress proposed Congress create a $2 billion fund to plug abandoned wells, estimating it could remediate 57,000 wells and support up to 24,000 jobs in energy producing states. Greenpeace estimates more than half of America’s unplugged wells are in just three states (Oklahoma, Pennsylvania, and Texas), with a large majority of all abandoned wells concentrated in just 15 states, and proposed a $4 billion funding stream across five years to plug 250,000 abandoned wells.

Resources for the Future aims even higher, proposing the federal government fund a program to plug up to 500,000 abandoned wells at a cost of up to $24 billion, estimating it would create up to 120,000 jobs nationwide for laid-off oil and gas workers.

States have also begun similar programs, albeit on a much smaller scale. IOGCC notes multiple states have existing programs to plug abandoned wells, plugging 3,400 wells in 2018. North Dakota allocated $66 million of its federal stimulus funding to plug roughly 400 wells and employ 1,000 laid off oil workers. Wyoming is considering several million dollars in additional funding for a well plugging program. Pennsylvania, which may be home to 200,000 abandoned wells and has more than 100,000 active wells, is only able to plug about a dozen wells per year and may face more than $6 billion in remediation costs.

Former Vice President Joe Biden has pledged to create more than a quarter million jobs by plugging oil and gas wells, and the House of Representatives included funding to plug abandoned wells using laid-off oil and gas workers in its July infrastructure bill. Unfortunately, the Trump administration’s methane rollback rule would go in the opposite direction by reducing well remediation responsibility for the oil and gas sector and rule out regulation of older abandoned wells in the future.

Plugging abandoned wells is a win for the country, climate, and both parties

The abandoned well problem looms larger every day, and the oil and gas industry won’t be able to overcome it. Polluted communities, unemployed workers, and a dangerous climate future hang in the balance.

For a fraction of what the federal government has spent on economic stimulus during the COVID-19 pandemic, American could put laid off oil and gas employees back to work, preventing massive amounts of the most dangerous greenhouse gas from warming our atmosphere, and cleaning up local communities. It’s a win-win-win-win proposal that both Republicans and Democrats can support.

Climate policy can’t be politicized any longer – we’re simply out of time. When the oil and gas industry, Red and Blue states, and environmental organizations all agree on a policy that will create jobs and cut emissions, it’s time to act.

I'm always skeptical these days that ANY policy can get beyond politicization, partisanship, etc., but you make a great point about how this should be a win-win across the board. But I still feel compelled to ask-- are there opponents? Is the hurdle towards putting this into action anything more tangible than where it lies on the priority list or how/when/how much to make funds available?

Relevant to this excellent post, there is this somewhat recent news - Former Vice President Joe Biden was asked if he'd "support the continuation of fracking safely" and "growing the industry." Visit this ABC News fact checking to read his answer and the analysis here

Many see natural gas as a transition fuel, as decribed in this peer-reviewed article, Natural gas: A transition fuel for sustainable energy system transformation? https://onlinelibrary.wiley.com/doi/full/10.1002/ese3.380

Case studies include countries that can be placed in two categories: those with an abundance of natural gas reserves (Iran and Norway) and those that are import‐dependent (India and UK). The cross‐country analysis will help with the understanding of the realistic challenges and opportunities of natural gas as a transition fuel.

As for the idle workforce in the oil & gas industry due to COVID-19 and during the energy transition, there are no easy answers. One concept that can be explored is that of transferrable skills, realizing that those in one industry's workforce can, in principle, possess the fundamental skills necessary in another. More on that can be found by a careful examination of the data from the U.S. Bureau of Labor Statistics. For example, there are these entries:

Where there is overlap, there are opportunities that properly designed and implemented government policies can enhance, encourage and foster.

One concept that can be explored is that of transferrable skills, realizing that those in one industry's workforce can, in principle, possess the fundamental skills necessary in another

Completely agree here, Greg. These professionals have a wealth of knowledge that can truly be tapped into and steered to advance the future energy economy as well-- the quintessential example being deep see oil drilling experts pivoting to working on offshore wind platform building. For gas professionals, I've no doubt there are similar opportunities. And where there isn't one-for-one job opening availability and/or fits for their skills, that's where intervention by policy for job training or early retirement or something of the like should be considered. It's not the fault of these individuals that their industry is being supplanted and so they shouldn't be hung out to dry, but keeping a damaging industry around simply to employ the people who currently work in it is an effort in futility.