Five years ago at the annual Conference of the Parties (COP21) in Paris, France, member countries of the United Nations Framework Convention on Climate Change (UNFCCC) established ambitious targets and financial mechanisms to curb climate change, with the ultimate aim of limiting warming to well below 2° Celsius by 2100. The plan was officially ratified as the Paris Agreement in April 2016, and many governments have since enacted sweeping policies to meet their stated climate goals, known as nationally determined contributions (NDCs). 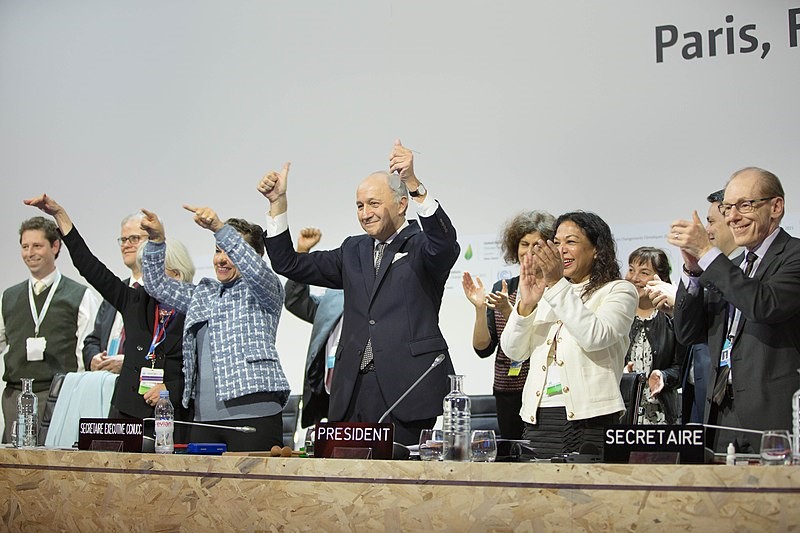 Adoption of the Paris Agreement, December 2015. Photo: UNclimatechange | CC BY 2.0

This year the UNFCCC was forced to postpone COP26 due to the COVID-19 pandemic. Instead of November 2020 serving as a five-year anniversary of progress, it was marked by the U.S.’s official withdrawal from the Agreement under the Trump Administration. However, President-elect Joe Biden has vowed to rejoin the Paris Agreement within his first months, if not days, in office.

What exactly does the U.S. stand to gain by rejoining the Paris Agreement? Recent research led by Weifeng Liu published in Energy Economics looks at the economic and environmental stakes of participation in the Paris Agreement. The authors’ findings are based on a multi-sector, multi-country model of the global economy designed to provide short- and medium-term impacts of energy and climate policies (specifically, NDCs) by building in key energy market and behavior dynamics along with technology heterogeneity. Their analysis provides insights into the consequences of key countries such as the U.S. and China withdrawing from the Paris Agreement.

Liu’s team assumes that all countries meet their proposed NDCs by applying country-specific, annually adjusted carbon prices, starting at or near $0 beginning in 2020 and increasing linearly over the next five to ten years until NDCs are met, with the proceeds redistributed as rebates to individual households. The authors recognize a carbon price is one of many policies that can be applied to meet NDCs, but chose it as a common approach to compare effects across countries and to provide a direct proxy for country-specific costs of achieving respective NDCs. 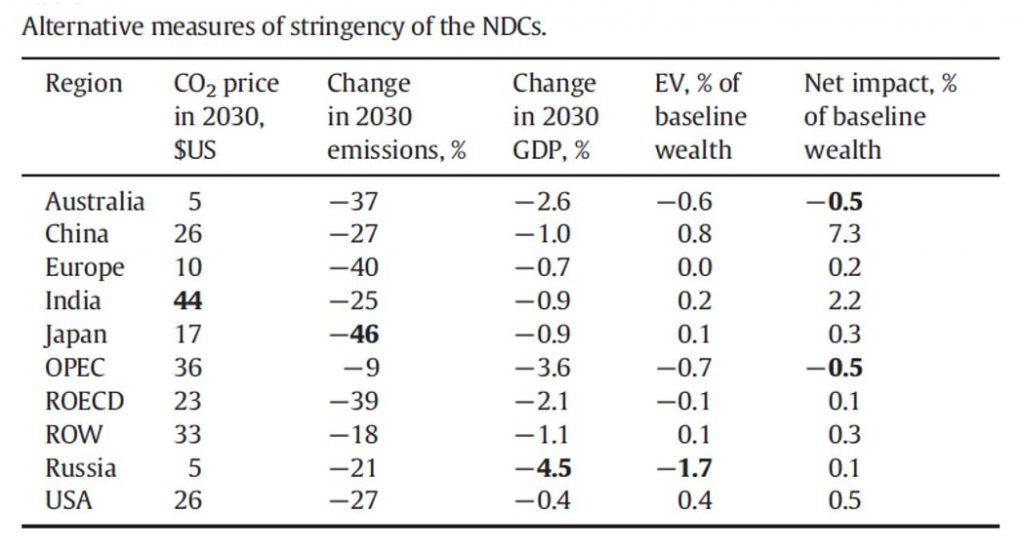 Figure 1. Economic impacts in different countries and regions (including Rest of World, or ROW) of meeting Paris Agreement NDCs. In response to a country-specific carbon fee and rebate policy, all regions demonstrate an initial dip in GDP between 2020-2030 (affecting OPEC and the Russian Federation the most due to their heavy reliance on fossil exports), but most regions experience positive economic welfare benefits (represented by equivalent variations, or EVs) as well as net impacts (after factoring in key co-benefits). Source: Liu et al. 2020.

Modeled carbon prices varied significantly from country to country, depending on carbon intensity of fuels in a country’s starting energy mix, sectoral production and consumption, and baseline price levels (see Figure 1). The analysis finds all regions exhibit an initial dip in Gross Domestic Product (GDP), especially affecting the Organization for Petroleum Exporting Countries and Russian Federation due to their heavy reliance on fossil exports. The analysis also shows, however, that most regions experience positive household economic welfare benefits represented by equivalent variations.

The economic co-benefits of meeting Paris Agreement NDCs were positive across the board and bolster net impacts for all countries and regions, especially China (Figure 2). The value of co-benefits varies depending on dominant fuels and geography, but mostly account for health benefits due to decreased air pollution and reduced vehicle congestion and accident externalities.

Liu’s model notably does not account for costs of climate change impacts or damages, nor are they reflected in equivalent variations, value of co-benefits, or net impacts; and yet almost all regions benefit economically from meeting their NDCs. Longer-term financial analyses, such as one recently published by Wei and colleagues in Nature Communications, have found very clear long-term benefits to GDP across all countries by 2100 if NDCs are achieved – benefits that grow as climate policies accelerate to meet a 1.5° or 2°C future. 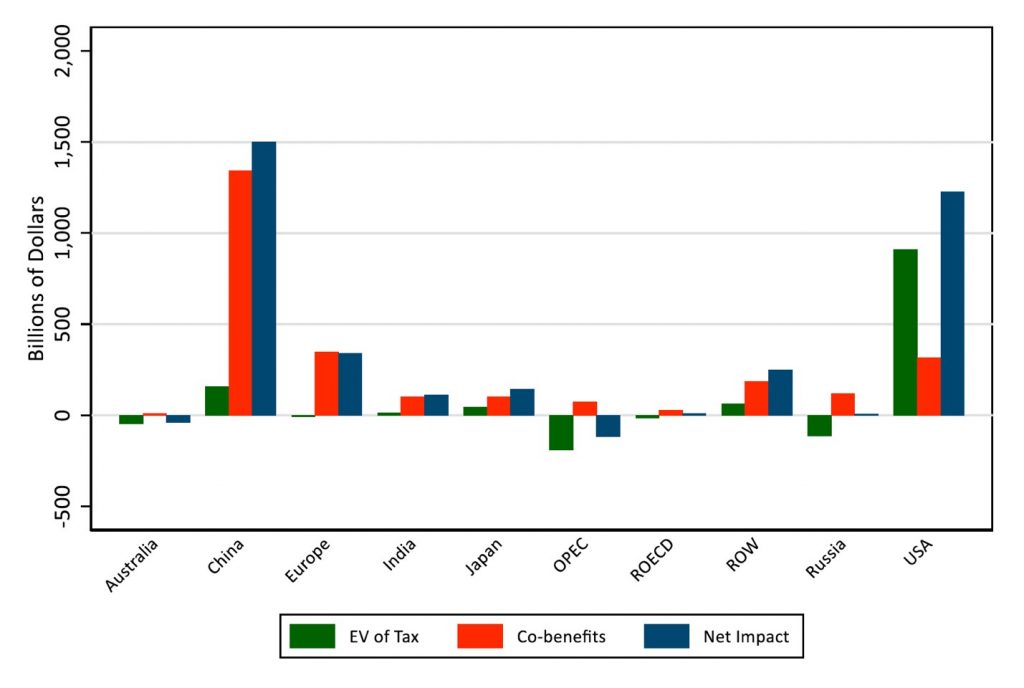 Liu also models unilateral withdrawal from the Paris Agreement by China or the U.S., as the Trump administration did last month. While these scenarios boost the departing country’s GDP, the benefit is relatively small (a fraction of a percentage point) and ultimately harms the country’s economy. The economic co-benefits of staying in the Paris Agreement until 2030 significantly outweighed the short-term rise in GDP from withdrawing. Emissions impacts were significant – half the emissions averted under a Paris Agreement scenario were lost in a China withdrawal scenario.

Liu’s economic analysis demonstrates some of the benefits countries stand to gain by adhering to the Paris Agreement, but it doesn’t fully address whether NDCs are being met by member countries or are sufficient to fulfill the Agreement’s aim of curbing climate change to less than 2°C by 2100. Liu’s team partially answers these questions by modeling the emissions impacts of NDCs, finding reduced emissions compared to a business-as-usual scenario, but falling short of requirements to keep warming below 2°C.

This finding is reinforced by a slew of research conducted since the Paris Agreement was ratified, including a study recently published by Roelfsema and others in Nature Communications. Their research is based on a unique public policy inventory and multi-model analysis using integrated assessment models (IAMs), modeling the efficacy of NDCs and going a step further to model the impacts of already implemented policies. This analysis helps address the other question of whether countries are actually meeting their NDCs (see Figure 3). 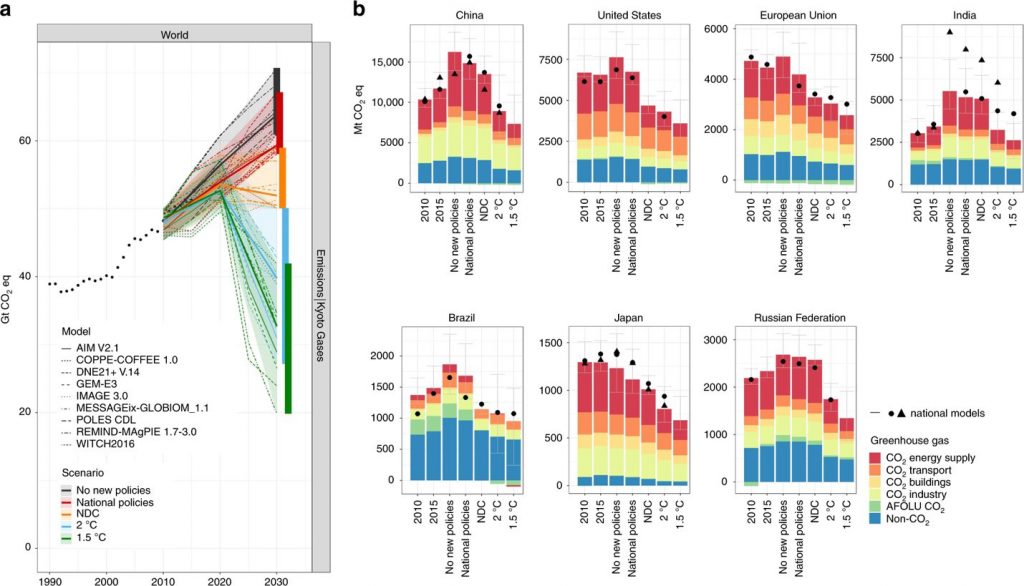 Analyzing implemented policies shows some countries including China, India, Japan, and the Russian Federation are projected to meet their initial NDCs by 2030 and thus have low or no implementation gaps, but they would still fall short of 2°C targets, thus demonstrating ambition and emissions gaps. Other countries, including the U.S., are critically behind in meeting NDCs by 2030, demonstrating gaps in implementation, ambition, and overall emissions. This is unsurprising given stark changes in U.S. climate policy priorities since the Paris Agreement was signed.

Successfully addressing these ambition gaps will determine whether the Paris Agreement can prove its institutional and environmental efficacy, according to a recent comprehensive review  by Raiser and colleagues published in Environmental Research Letters. Their review points to common themes in scientific literature regarding the strengths and shortcomings of the Paris Agreement. While challenges like data transparency, reporting standards, lack of funding, capacity, and climate justice remain, the authors also recognize the power of shared global norms the Agreement has established. They argue leveraging these norms will be critical to inspiring accelerated ambition in the next round of NDCs to realize the Paris Agreement’s vision of keeping future warming below 2°C.

Current and future targets must maintain a focus on equity. As Pauw and colleagues recently published, many opportunities exist to improve emissions impact and equity through proper financing of conditional NDCs in developing countries, which rely on funding from wealthier nations. Better financing of conditional NDCs, as well as increased support for capacity in developing countries, would also support greater emissions impact and equity in the amelioration of greenhouse gases.

In preparing for the 2023 Global Stocktake of NDCs, many countries will face pressure to accelerate global progress on emissions. But a reengaged U.S. will face the compounded challenges of playing catch up to meet prior NDCs, while intensifying those ambitions domestically and globally.

Raiser, K., Kornek, U., Flachsland, C. And Lamb, W.F., 2020. Is The Paris Agreement Effective? A Systematic Map Of The Evidence. Environmental Research Letters.

The economic co-benefits of meeting Paris Agreement NDCs were positive across the board and bolster net impacts for all countries and regions, especially China (Figure 2). The value of co-benefits varies depending on dominant fuels and geography, but mostly account for health benefits due to decreased air pollution and reduced vehicle congestion and accident externalities.

It seems like these benefits are tied to the improvements that would be needed to meet Paris, but not necessarily the benefits of joining Paris. May seem like splitting hairs, but if the U.S. meets these goals on its own without joining the international accord then they'd still receive the benefits-- and for people who have championed pulling out of Paris, that might be their argument, that we could do this on our own? I don't think that's the right approach at all, but it brings about the bigger issue of what teeth do these international agreements have when countries fall short? The motivation for these agreements is more intrinsic-- but perhaps they would be more effective if there was accountability measures put behind them?