I am a passionate and solution-oriented student specialised in socio-ecological sustainability and resource management. Born in Paris, raised in Vienna, I graduated from humanistic high school... 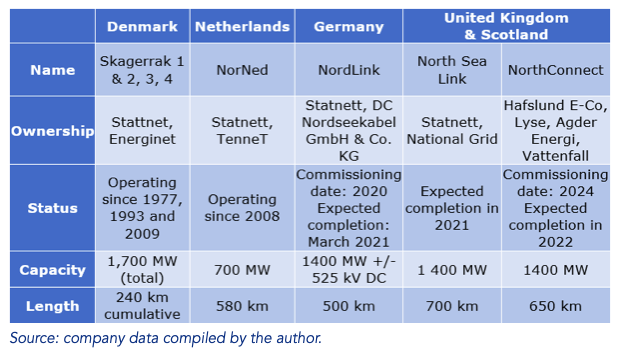 The European Union (EU) is committed to reach climate neutrality by 2050. Similarly, Norway aims to create a zero-emission society by that same year. As a member of the European Economic Area, Norway supports the European Green Deal by developing a supportive legal and financial framework as well as contributing expertise and capacity to the deployment of emission abatement solutions in a trans-national perspective.1 These parallel trajectories can support one another and there are manifold opportunities for cooperation with potential decarbonization and security of supply benefits.

With electricity consumption expected to rise significantly under all decarbonization scenarios, total stationary storage needs of the European electricity grid are projected to reach 250-450 terawatt hours (TWh) per annum by 20502 and could require a balancing power of around 23TWh monthly and 200-300 gigawatts (GW) hourly.3 Projecting a 60% penetration of variable renewable energy sources (VRES) in the power system by 2050, the high-RES scenario requires the largest additional flexibility needs. Energy storage can significantly contribute to the integration of VRES by benchmarking their integration costs: savings are estimated at roughly €4 per megawatt hour (MWh) of VRES production.4 However, due to transmission, distribution and must-run constraints, the value of energy storage is largely determined by the degree of connectivity between sources and

storage sites. To meet these growing flexibility needs, the EU can develop a wide range of complementary options, including the direct storage of electricity via pumped hydro and stationary batteries as well as the chemical storage of electricity using hydrogen and e-fuels. Hydropower use in the EU (348 TWh in 2019, or 11% of generation) can only be slightly increased by upgrading existing plants or developing small plants and is facing climate change constraints. Hence, the bulk of additional storage needed is expected to come from stationary solutions.5 Yet, the hydropower nation Norway can still offer important balancing power to the European electricity network.

Endowed with about 50% of Europe’s reservoir capacity, Norway’s storage reservoirs amount to a total storage capacity of 86.5 TWh. The HydroBalance project [2013-2017] from the Centre for Environmental Design of Renewable Energy (CEDREN) showed that Norway can increase its balancing power capacity by up to +20 GW.6 Accordingly, Norway could account for 10% of EU-wide energy storage needs by 2050.7 In order to achieve this, upgrading existing plants as well as adding incremental transmission capacity is necessary. While electricity trade across North-West Europe (NWE) has been operating through a network of subsea power cables linking the Nordic market to Denmark and the Netherlands, additional interconnections to the United Kingdom (UK), Germany and Scotland are currently under construction.

Besides storage, the Nordic power market model benefit from high flexibility due to its dynamic management. In the 1990s, Norway was the first country to liberalize electricity trade in Europe whilst a common Nordic future and spot market for power exchange was created in 2006. The EU is committed to further harmonizing and integrating its electricity markets. One of the latest developments was the creation of an integrated intra-day market for transmission system operators across the EU, as launched in 2018 by the XBID initiative building on the NordPool system. The cost of upgrading Norway's hydroelectric power park to reach the incremental 20 GW balancing power is estimated at €6 billion.8 Transmission costs in Norway and to continental Europe would then need to be added. High up-front investment costs, environmental concerns and uncertainty about the future competitiveness of Norwegian electricity have initially held back investments. The harmonization of the power network across NWE thus sends positive market signals.

Reinforcing the existing European transmission grid through major “North-South corridors” identified by the Trans-European Energy Networks (TEN-E) policy will be decisive to the success of a pan-European electricity network. The european network of transmission system operators for electricity (ENTSOE) e-Highway project, run between 2012 and 2015, has shown that the necessary extensions will require investments in the range of €100-400 billion and could avoid curtailment cost for 500 TWh of VRES electricity and 200 Mt of CO2 emissions. Under the Connecting Europe Facility (CEF) initiative, funds are allocated to transmission infrastructures linking European power markets. In NWE, the Northern Seas Offshore Grid (NSOG) has received €112.2 million from the CEF Energy 2014-2020 budget, whilst an additional € 26.4 million were invested in Norway.

Further, Brexit uncertainties projects of common interest (PCI) such as the North Sea Countries’ Offshore Grid Initiative (NSCOGI) are investigating how to lift barriers to the integration of VRES located in the North Sea. In this respect, the Brexit process is generating uncertainty for energy cooperation in NWE as it induces changes in the legal framework regulating electricity and carbon trade. At present, the UK is part of the North-West European coupling area, a fully integrated market including Norway which is linked to the Nordpool market. The nation stays committed to the development of the Regional Group North Sea, in line with ENTSOE’s Ten-Year Network Development Plan. Regulation on Energy Market Integrity and Transparency (REMIT) will also largely be maintained. However, alternative trading arrangements will need to be developed and NWE nations are likely to adopt stricter examination frameworks to balance risks. Regarding CO2, the UK will remain in the Emission Trading System (EU-ETS) until the end of 2020 and is examining national carbon pricing options post-Brexit. The UK is also developing alternative finance mechanisms, such as the Clean Growth Strategy and the Industrial Strategy Challenge Fund.

Carbon capture and storage (CCS) will be a key element to enable carbon neutrality by 2050. Since the 2009 amendment of the London Protocol, cross-border transport of CO2 for the purpose of offshore storage is allowed. Currently, a stable regulatory framework for international cooperation is being developed in order to transition small-scale projects from demonstration to commercial stage and facilitate common infrastructure development.

Fossil fuels will largely be phased out by 2050 in the EU, which will affect Norway, which draws 20% of its state revenues from this sector (€21.5 billion in 2019). Yet coupled with CCS, gas is considered to have system benefits, including controllability of generation as well as reducing system costs (and hence consumer prices). Additionally, using natural gas for decarbonized (“blue”) hydrogen production represents an added benefit.

The multiple aquifers and to-be depleted oil and gas fields in the North Sea are considered safe for long-term CO2 sequestration. These deep saline formations have greater storage capacity than onshore basins and bare higher scaling-up and cost reduction potential, alongside higher social acceptance. Norway’s offshore CO2 storage capacity is about 80 billion tons, or more than twice the world’s annual CO2 emissions.9 Creating a trans-national carbon storage hub in the North Sea could thus be indispensable to achieve carbon neutrality by 2050.

The Northern Lights CCS is currently the most advanced project: Awarded a PCI status in January 2020, it aims to develop a ship-based pan-European CO2 transport and storage network linking inland industrial clusters, where CCS is not readily available, to a common carbon sequestration hub in the North Sea. Gassnova, the Norwegian state enterprise for CCS, is deploying between €1.7 and 2.3 billion to build the first full-scale CCS chain linking industrial Norway as a Decarbonization Hub for the EU plants near Oslo to a liquefaction site in Bergen.10 From there, the captured CO2 will be transported to a storage reservoir (“Aurora”) offshore. The receiving terminal is conceived to reach a storage capacity of 5 million tons of CO2/year. Planned to start operating in 2023, Equinor, Total and Shell are looking to extend this value chain towards Sweden, Germany, Belgium, the Netherlands and the UK, projecting inflow at over 800,000 tons of CO2 annually. The consortium anticipates initial investments of €6.5 billion which will be shared with the Norwegian state. If this project proves successful, depleted oil reservoirs in the North Sea could be turned into CO2 storage tanks in the future.

Although technological advancements in transmission and injection are likely to limit CO2 handling costs after sufficient take-up, the rise of carbon prices will be key. The EU-ETS reform is expected to provide strengthening stimulus for CCS projects from 2021 onwards, with allowance prices possibly reaching €55 per ton by 202511, in comparison to €25 per ton as of July 202012, if economies recover.

Overall, decarbonization in NWE will benefit from close cooperation between Norway, the UK and the EU. While efforts to deepen coordination within a pan-European electricity network are well framed by EU legislation, initiatives linked to the scale up of CCS in the North Sea are, as of today, mainly driven by nations and businesses directly implicated. The European Commission rightly recognizes the necessity of a carbon-dedicated infrastructure and promotes additional measures to foster CCS projects in its latest strategy for energy system integration.13 Rising carbon prices induced by the EU-ETS as well as direct financial support will be paramount for the creation of a decarbonization hub in the North Sea. To spur innovation in this sector, the EU and Norway should increasingly channel funds towards CCS. The efforts of the 2009 EU-Directive on geological storage of CO2 i.e. allocating funds from the Horizon 2020 (now HorizonEurope), the Innovation Fund and Connecting Europe Facility, should be ramped up.

2. Energy Storage for a Decarbonised Europe by 2050, European Association for Storage of Energy (EASA), 2019, available at: https://ease-storage.eu.

5. A Clean Planet for all. A European long-term strategic vision for a prosperous, modern, competitive and climate neutral economy, European Commission, November 28, 2018, p. 76-78, available at: https://ec.europa.eu.

It is difficult to see how North America can build a robust lithium-ion supply chain without having domestic lithium-ion cell fabricators at the core of that chain that have the ability and inclination to purchase goods from other domestic suppliers.

In this article Mark takes a highly personal view of the fads and fallacies of the energy transition, concluding with a huge omission - one could call it the elephant in the room. But be warned: some of the opinions expressed are rather trenchant.