Isuru Seneviratne has 15 years’ experience as a finance professional, specializing in energy investment and sustainable development. From 2004–2015, Isuru was an analyst at the...

New York is the only U.S. state with significant methane gas resources to ban High Volume Hydraulic Fracture stimulation (fracking) for petroleum extraction. Though NY gas production has plummeted, the state's consumption has been growing robustly. NY gas consumption has grown at a compound annual rate of 1.2%, 1.4%, and 1.4% for the 5, 10, and 15 years leading up to 2018. 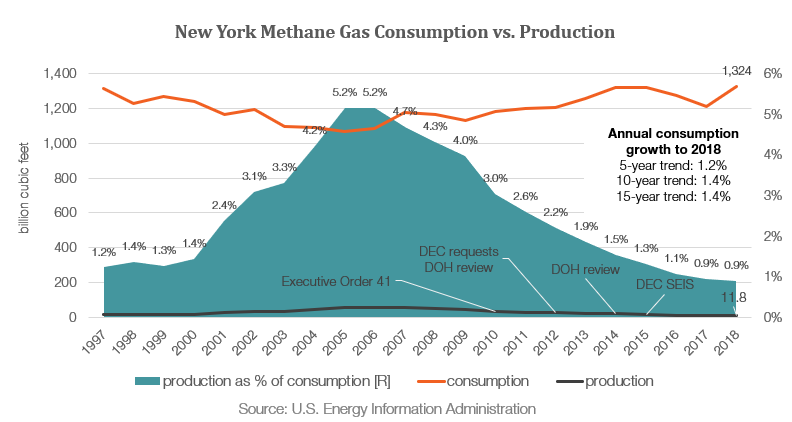 The fracking ban protecting NY water resources from potential harm from shale development (NYSDEC, 2015; NYDOH, 2014). However, until NY cuts gas consumption, curbing production will not help to mitigate global warming. Though the motives of supply restriction by cartel and a 'just say no' strategy to fossil extraction are different, the outcome is the same: higher profit for producers outside the curbed jurisdiction (Table 1). 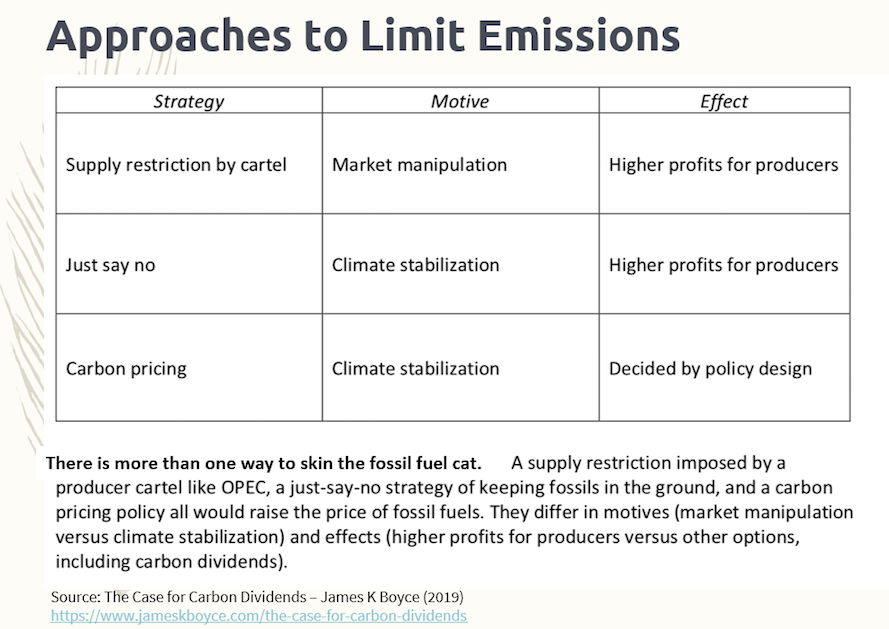 Local pollution-based research, methodical grassroots civic activism, and a receptive governor played a key role in guiding the state away from shale development (Hang, 2016). New Yorkers’ relative financial prosperity may have allowed the state to consume methane gas at a higher-than-average rate for heating and electricity production while externalizing the pollution of production to their neighbors (Table 2). Availability of alternative employment opportunities in NY may have prevented the “jobs and royalties” argument to prevail during the last decade of Marcellus acceleration in PA. ​​​​​​​

Table 2: Energy production, consumption, and the affordability to deny extraction by state. All numbers are for 2018, except noted otherwise (*7 = 2017). Sources: Bureau of Economic Analysis, Energy Information Administration, Bureau of Labor Statistics.

New York has madated the closure of Indian Point nuclear power plant, responsible for a quarter of downstate generation (16.3 TWh/a).  Even if all the downstate projects in the NYISO interconnection queue slated to come only until December 2021 do materialize on time, and there is sufficient grid-scale storage/transmission to deliver variable renewable resources to when and where needed, 80-90% of incremental generation will be fossil-fired. New York's gas use in the electricity sector is about to increase 27%, elevating the state's methane consumption by 9.1% (Figure 3). The temporary respite from COVID-19 demand destruction should not hide the decades of fossil dependency "carbon lock-in" engineered by NY policies and economics.​​​​​​​

Cheap gas prices had been shifting New York electric grid to be gas-centric for over a decade (Figure 4). 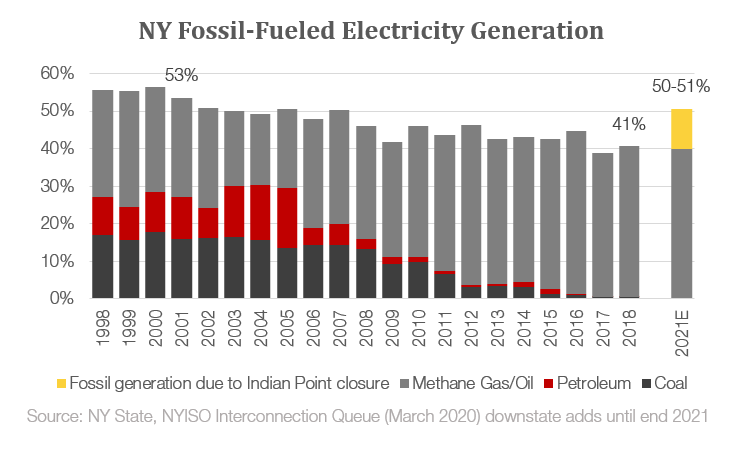 However, until NY cuts gas consumption, curbing production will not help to mitigate global warming. Though the motives of supply restriction by cartel and a 'just say no' strategy to fossil extraction are different, the outcome is the same: higher profit for producers outside the curbed jurisdiction (Table 1).

This is a compelling way to frame the issue-- often it's easy to try to say let's take an 'all of the above' approach of pushing to reduce consumption while also pushing to 'keep it in the ground,' but with limited time, resources, and political capital, it really is critical to pick the most likely to succeed option.

For anyone interested in truly effective climate action, I highly recommend James Boyce's brilliant book from where I excerpted Table 1.

Thanks for the resource, Isuru