At COP26 Prince Charles called for governments to put themselves on a “war-like footing” to address climate change.

The war Western Industrial Nations, of which the prince is a citizen, is losing is that of ideas. In large part due to the fact the free enterprise, creative destruction, unfettered competition, Conservative Environmentalist of Theodore Roosevelt’s ilk have been captured by the fossil fuel industry.

With the result modern-day progressives like President Biden are instead reduced to begging major energy producing countries to boost oil supplies to ensure a global economic recovery at the G20 in Rome one day, and two days later pledging at the COP26 in Glasgow “to lower greenhouse gas emissions as well as aid developing countries in their climate efforts as well.”

And for Canada’s Prime Minister Trudeau to push for the world to impose a global price on carbon by 2030 that would cover 60 per cent of the planet's greenhouse gas emissions, when more than 880,000 Canadian jobs are vulnerable to a clean energy transition for which carbon pricing provides no compensation or capital for the transition. And where there is a strong correlation between high energy prices and global recessions.

More and cheaper energy that mitigates climate change has exponentially greater resonance with the public than higher taxes and is available.

The following graphic from Lazard shows the declining, historical, levelized cost of energy (LCOE) for unsubsidized wind and solar to 2019. 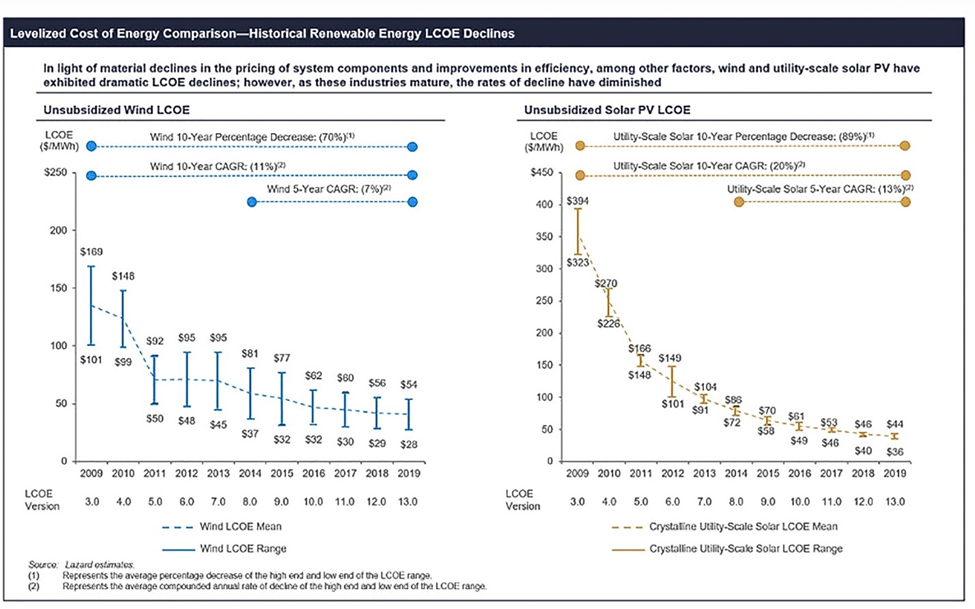 The mean price for wind was $41/MWh and for Solar PV was $40/MWh in 2019. But according to the US Congressional Budget Office testimony in 2016, renewables were provided by about $10.9 billion in tax preferences as compared to the $4.6 billion that went to fossil fuels that year. And since wind and solar represented 33% of the US primary renewable sources in 2019, it is assumed they would have received the same ratio of preferences, which amount to about $3.6 billion.

And over and above the levelized costs and tax subsidies the following graphic shows the significant levelized cost of storage and transmission and distribution costs of wind of solar. 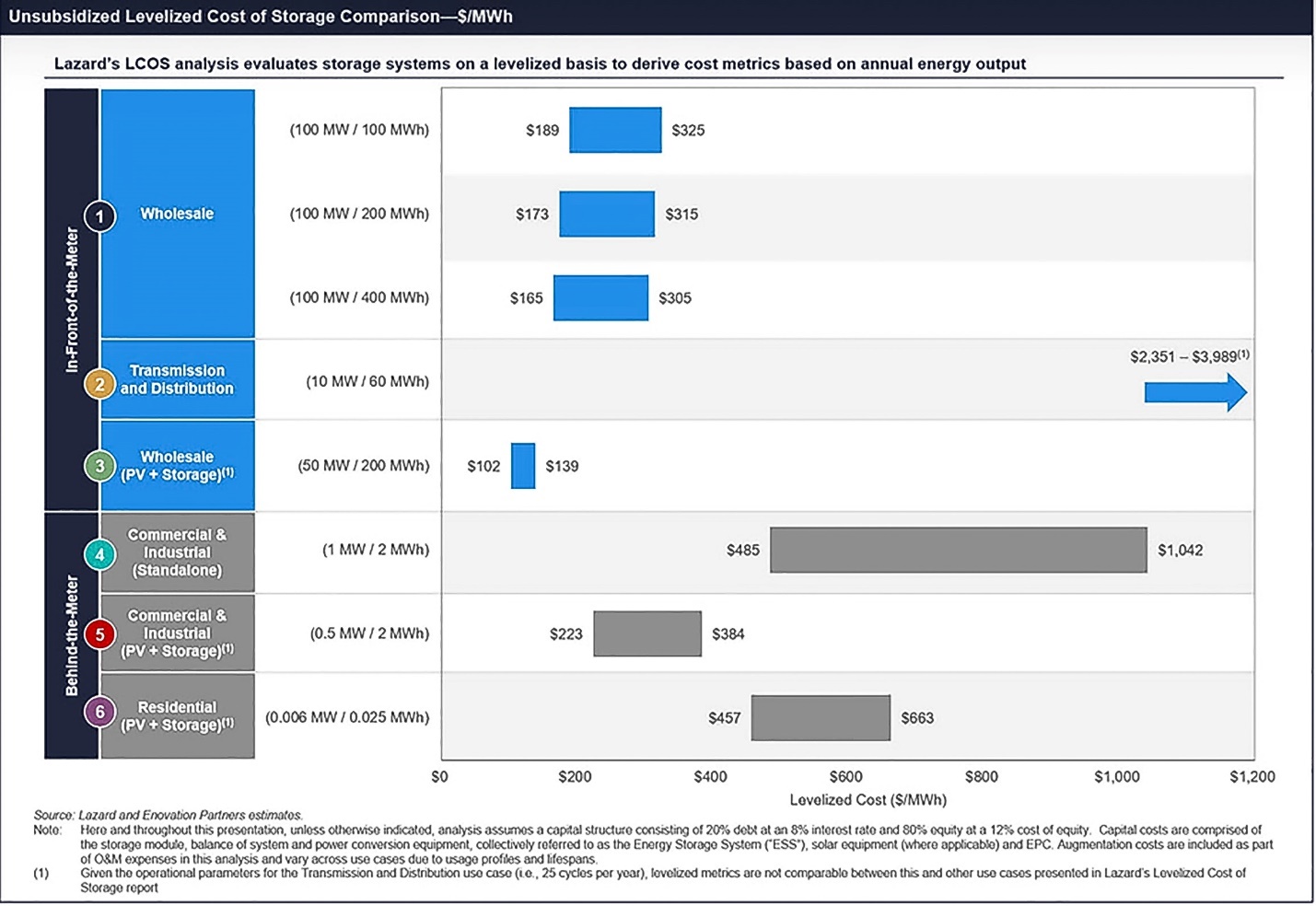 None of which would be applicable to the 1 GW Thermodynamic Geoengineering platform shown below. 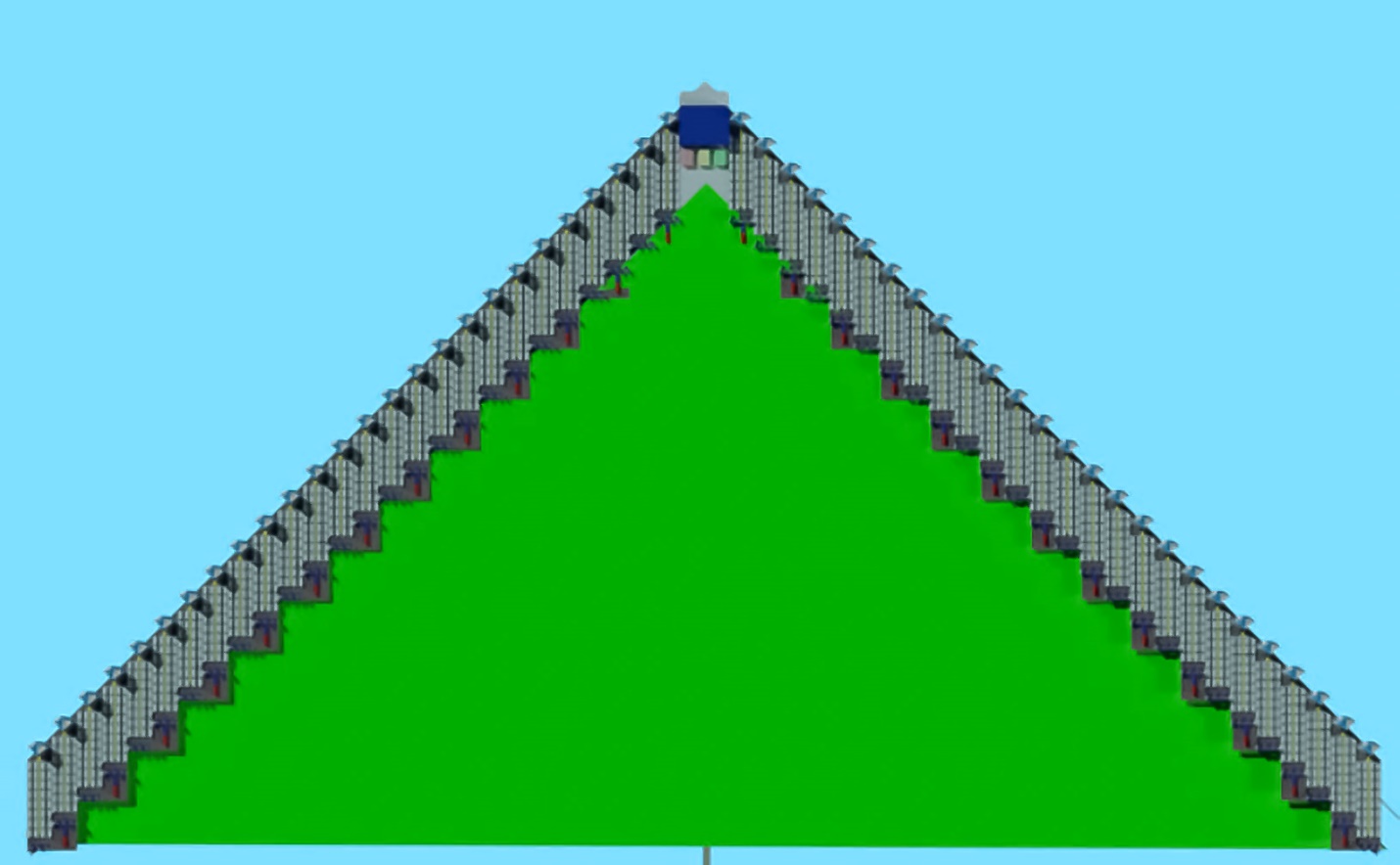 Which would provide 156,789 m2 of  ocean green field on which steel, aluminium, cement, and fertilizers can be manufactured with electricity provided from the ocean. Or hydrogen for the transportation sector. At the same time as the ocean surface is being cooled and the environment is being restored.

The raw materials for the steel, aluminium, cement, or fertilizer manufacture could be loaded on one side of an ocean basin and the finished products delivered on the other.

The width of each of the three major ocean basins are respectively the Pacific, 17,700 km, the Atlantic, 4,830 and the Indian Ocean, 10,000 kilometers, and the speed at which the platforms harvest and convert surface heat to power is 2km/hr.

A single crossing of each of the basins would range from about 1, to 1/3rd, to a half year each. So, the type and quantity of materials required and the products desired would govern the production and whether there was a need for a mid-basin turnaround.

All for less than half the current cost of wind or solar per the following graphic which doesn’t include interest and maintenance costs that would bring the total cost to about $.02/kWh.

Nations that provide the cheap, climate mitigating, energy their citizens need will succeed as will their politicians.

Hopefully they will have the wit to share their good fortune.

At COP26 Prince Charles called for governments to put themselves on a “war-like footing” to address climate change.

It's disheartening to witness the disconnect between climate rhetoric and action. Talk is cheap; politicians and public figures are happy to make bold pronouncements about the need for action, but it turns out that "action", in their parlance, excludes anything that would seriously disrupt "business as usual". God forbid that anything threaten the sacred cows of corporate profits and economic growth. Never mind the fact that too much of the wrong kind of economic growth is arguably exactly what has gotten into our current mess.

Our collective unwillingness to engage in real change leaves us desperately hoping for one or more magic technology bullets that will come along and save us, in spite of ourselves. Something that will allow us to continue economic growth and business more or less as usual, while disposing of the troublesome issues of global warming, ocean acidification, and rising sea levels. Something that will outcompete fossil fuels, without the painful need to raise the cost of fossil fuels by revoking their free atmospheric dumping privileges.

It could happen. There's no shortage of candidates in the running. Next generation nuclear technologies, various avenues toward practical fusion reactors, advanced energy storage technologies that will be good enough to overcome the limitations of intermittent renewables, and who knows what dark horse technologies that may show up.

If your TG scheme proves to work as well -- and as economically -- as you project, then maybe it could be a magic bullet solution. Conventional wisdom would say that the low thermal efficiency of OTEC and the high volumes of seawater that must pass through the enormous heat exchangers would render the capital cost per MW of power capacity too high for economic feasibility. At this point, I'm agnostic about that issue. But that's the bias you're up against in trying to shake loose development funding.

As an aside, I think you intended to include a link to more information about TG, but it failed to transfer as a link when you entered the article as an EC post. I'm guessing that the link you intended was this.

Thanks for your analysis and inserting the link Roger. Your incite is always welcome.

"At COP26 Prince Charles called for governments to put themselves on a “war-like footing” to address climate change."

In 1997 dollars, the CapEx of a Nimitz-class aircraft carrier was $4.1 billion and its maintenance costs were $5.7 billion.

"Conventional wisdom would say that the low thermal efficiency of OTEC and the high volumes of seawater that must pass through the enormous heat exchangers would render the capital cost per MW of power capacity too high for economic feasibility."

As are 31, 000 TG platforms that cost about the same as a carrier. That fly the Stars and Stripes in every major ocean to harvest surface heat to produce 12 times the current US  consumption of primary energy, at a levelized cost of $.007/kWh whereas the average retail price for US citizens in 2020 was $.1066/kWh, and mitigates every consequence of global warming.