image credit: permission to use

Like COVID-19, global warming is an example of what Albert Einstein  referred to as the 8th wonder of the world, compound interest, or in the case of warming and viruses, exponential growth.

According to Bloomberg, the world ventilator demand is now 10 times what is available. “Overall in the U.S., the Society of Critical Care Medicine estimates that 960,000 patients would need ventilator support due to COVID-19, but the nation only has about 200,000 such machines”, Bloomberg says. And points out in Italy a severe ventilator shortage has forced doctors to triage patients with the sickest and weakest going without.

The formula for exponential growth is: FV = PV(1+ r)^n

FV is the future value

PV is the present value

r is the rate of interest

n is the number of years (or periods)

Worldometer shows that the USA has experienced about 19% of the cases to date per the following table but only 3.75% of those are serious and thus requiring ventilators.

The following table shows the total cases for April 12-22 and how it would be on the 16th, when the global total reaches 32,551,198, the maximum need for ventilators would be reached, about 5 times the current US supply. 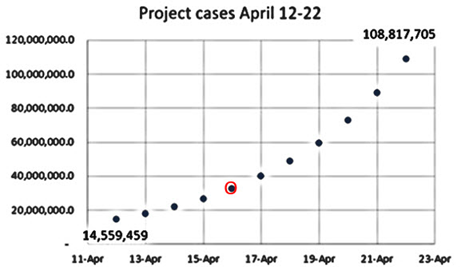 Since, April 16th is two weeks from now, the incubation period of COVID-19 is between 1 and 14 days, the virus can live only 3 days on surfaces and the virtually globally recognized need for social distancing, there is no excuse for the virus not to be halted  by April 22. Therefore, it is reasonable to assume there isn’t much we can really to do to “flatten the curve” beyond the Herculean job that is already being done by the world’s healthcare workers.

All else being equal, infections should peak in about two weeks and then decline at a rate mirroring its growth per the Jan 22 to June 22 example shown above.

Unfortunately, the situation with global warming isn’t nearly as cut and dried, since greenhouse gas concentrations as well as heat accumulation are compound, and the reversal times can be in millennia.

The following charts for CO2 concentrations between 1780 to 2020 and for 1960-2052 where projected concentrations will be twice the 280-ppm baseline, reflect the historical growth rate of emissions of 2.05% a year.

As the following chart based on the CO2 sequestering potential of Negative emissions CO2 ocean thermal energy potential shows the emissions curve can be flattened in 7 years.

The restraining factor for obtaining this result is the cost of producing 29 terawatts of NEOTEC power as calculated by the following table.

The following charts shows how exponential growth can influence the total cost.

With an initial investment of $1 billion compounded by the annual rates of interest generated by the plants shown above, plants rated between 100 MW and I GW can pay for themselves and ultimately produce 29 terawatts of power within between 114 to 127 years.

Starting from a $2 trillion baseline, equal to the US coronavirus bailout, the timeline for scaling up to a sustainable level of 29 terawatts can be shortened to between 38 and 48 years.

NBC news suggests the coronavirus pandemic is a fire drill for climate change.

The IPCC’s special report on the impacts of global warming of 1.5°C above pre-industrial levels and related global greenhouse gas emission pathways, in the context of strengthening the global response to the threat of climate change, sustainable development, and efforts to eradicate poverty, shows the temperature anomalies for various scenarios through the end of the century. 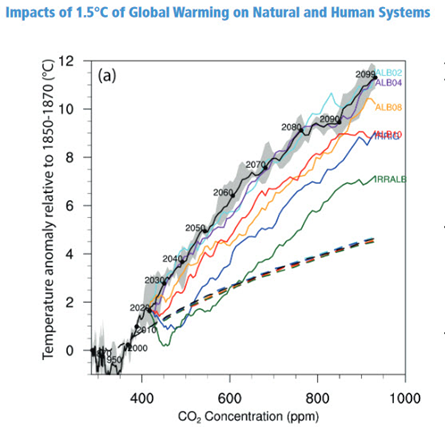 It shows the anomaly is approaching 2°C based on CO2 concentration alone, but when you add the other forcing factors as David Wasdell did in the next  graphic indicated by  the red dotted line, much of the forcing  won’t kick in for over 1,000 years, we are looking at warming in excess of 5°C even if we get CO2 concentrations down to 310 ppm. 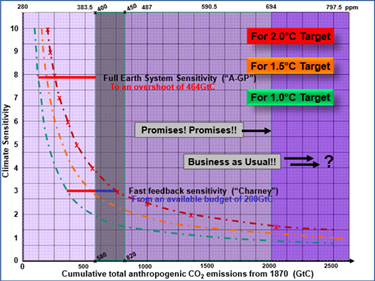 And this doesn’t account for the waste heat of energy sources we will need to use to replace fossil fuels and from the sources required to power the carbon dioxide removal efforts touted to keep warming within 2°C.

Flanner, in his paper Integrating anthropogenic heat flux with global climate models, shows that nearly all energy used for human economy is, at some point, dissipated thermally within Earth's atmosphere or land. The only energy that doesn’t fit this pattern is trapped solar energy converted to work.

Typical energy production contributes about 1% of the energy flux being added by anthropogenic greenhouse gases per the following graphic.

As with viruses, exponential growth of waste heat can mount up quickly.

For example, nuclear power, which is often hyped as the solution to global warming, is only about 33% efficient. Since it adds 2 terawatts of heat to the global system for every terawatt of power generated, within 150 years we will be experiencing as much warming from waste heat as we are currently seeing from greenhouse warming per the following.

Even if we can drawdown emissions to preindustrial level and produce energy solely from renewables, there is still the massive amount of energy that has been and will be added to the oceans by the time we finally get things under control to contend with.

Putting ocean heat into perspective, Levitus et al. in the paper  World ocean heat content and thermosteric sea level change (0–2000 m), 1955–2010 estimated an increase of 24x1022 Joules, representing a volume mean warming of 0.09°C of the 0-2000m layer of the World Ocean had been added to the ocean during the 55 years of  the study.

“If this heat were instantly transferred to the lower 10 km of the global atmosphere, it would result in a volume mean warming of this atmospheric layer by approximately 36°C,” they pointed out.

The problem is, once CO2 levels are drawn down to the 1780 baseline, there is nothing to keep ocean heat from warming the atmosphere in the manner Levitus forecast. 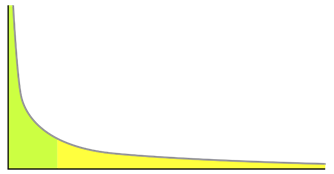 As with statistics and business, we need a long tail approach to warming to allow for the metering of ocean heat back to the atmosphere and then to space and no strategy, outside of thermodynamic geoengineering, allows for this to happen.

Thermodynamic geoengineering moves heat into the ocean to forestall warming and then recycles it once the heat returns to the surface in about 226 years.

It is estimated the amount of heat going into the oceans is currently about 384 terawatts yearly. About 7.6% of this can be converted to work to produce 29 terawatts a of useful work and the balance is moved into the deep water.

If this heat is converted on a straight-line depreciation basis, it can sustain us for the next 2973 year while the heat is gradually removed from the ocean. Or it can be converted exponentially per the following. In which case, the energy can sustain us for the next 11000 years at which time it will have been depleted to 7 terawatts a year where OTEC is sustainable in perpetuity. 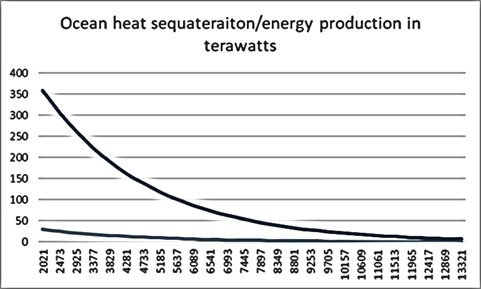 Einstein said with respect to exponential growth, “he who understands it, earns it; he who doesn’t, pays it.”

Policy makers and leaders need to recognize climate change is far more disruptive than a single virus and that bending the ocean heat curve rather than the CO2 curve is vital to sustaining mankind.

The logic/math/science behind flattening the curve has definitely seen some great communication to the general public to the point where most (though, frustratingly, not all) seem to 'get' it-- using that to make the logical leap to the challenges when looking at climate related projections is pretty clever-- so thanks for sharing, Jim!

If I had one question, it would perhaps what you see as the best way to take the lessons learned today and apply them to educating the public? The COVID-19 crisis forced people to learn because of the imminence of the threat, whereas climate apathy I think largely comes from people (erroneously) thinking the dangers are too far off to actually affect them. How do we bridge that gap?

Matt, look at the chart of the cost of the plants. It shows  when fully built out they would return between $7 trillion and $8.5 trillion a year and produce twice as much energy as we are deriving from fossil fuels, which are costing us up to $5 trillion a year as the environmental cost of doing business according to the IMF.

How is this not energy too cheap to meter when it costs only between $1 and $2.5 trillion a year.

I'm no economist, but to me the status quo makes no sense the envrionment notwithstanding.